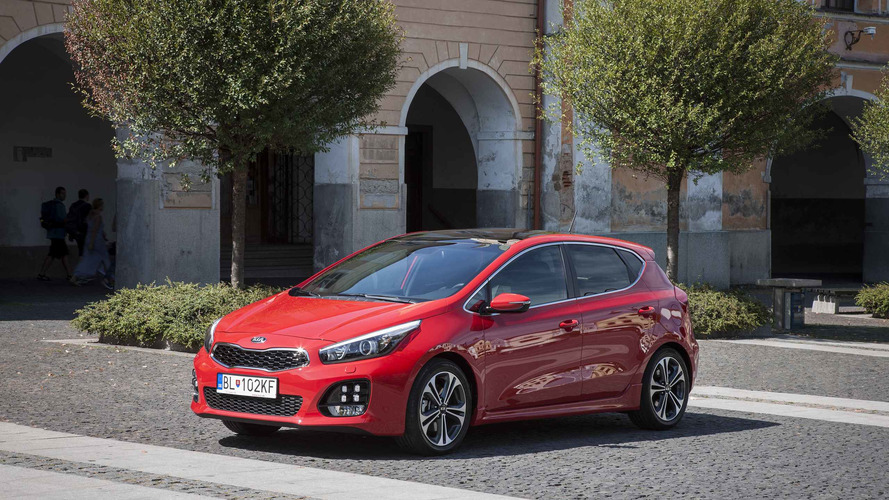 Attractive and well specified, but it doesn't lead in any field.

The Kia Ceed is an attractive, well-specified hatchback that competes in the fierce C-segment marketplace, where it has to take on some of the biggest names in the automotive game. There’s a three-door version called the Pro Ceed, but this five-door motor drops the ‘Pro’ prefix and proves to be a practical, likeable family car. Benefits include a long warranty, good levels of refinement, and some smooth turbocharged engines. Drive goes to the front wheels alone on all models, and there’s a six-speed manual gearbox as standard, with a seven-speed dual-clutch automatic transmission (DCT) as an option. There’s also a performance model, called the GT, although it’s not hugely powerful in the world of pacey hatchbacks.

Did you know? The car’s unusual name comes from its original badge, the CEEED – which, roughly, meant European Economic Community, European Design.

There’s a lot to like about the Kia Ceed, and that’s not just one of those patronising ‘oh, it’s not bad for the money’ statements. This is a car with plenty of space, an attractive and well-appointed interior, decent exterior looks, and good dynamics. It’s not quite class-leading in any single area and there are a few black marks against its (unusual) name, but this is a fine alternative to the traditional Ford Focus, Vauxhall Astra, and Volkswagen Golf default choices – and, as per usual with a Kia, no rival can match its seven-year warranty. Overlooking the Ceed, if you’re after a dependable and amiable family hatch, would therefore be a big mistake.

There’s a hawkish front end to the Kia that gives it distinctive and handsome looks in a class where there are a lot of attractive cars, so thankfully it doesn’t blend into the background. The rear end of the vehicle is less convincing, its rising waistline making the back windscreen quite pinched, but overall the car is an appealing piece of styling. It’s improved in the two GT-Line specifications, which add 17-inch alloys and the quad ‘Ice Cube’ LED daytime running lights (DRLs) that are features of the full-on GT model. All Ceed variants below the GT-Line and GT cars, bar the base-spec ‘1’ models, come with alloy wheels and a simpler LED DRL design.

Kia’s interiors are arguably nicer than their counterparts in equivalent Hyundais and, in the grand scheme of things, they’re also some of the best cabins in the business, in a slightly understated way. A Volkswagen is better finished, a Peugeot has flashier dash design, but the Kia’s layout is intuitive, the switchgear possesses superb haptics, and every display is clear and pin-sharp. The multifunction LCD screen in the instrument cluster is excellent but it’s only fitted from ‘3’ grade upwards.

All models have two 12-volt power sockets in the front, two cupholders in the console, a cooled glovebox, centre console storage, and big door pockets. From ‘2’ grade and up, two cupholders are additionally found in the rear armrest, while the front seatbacks get two map pockets as well. The USB and aux-in ports in front of the gear lever are illuminated, a neat touch making them easy to locate at night.

There’s a big boot, with 380 litres from the off, and 1,318 litres with the 60:40 range-wide split rear seats folded down; they also lie nice and flat, making the most of that enlarged cargo area. Access via the hatch is easy enough, as the aperture is a good shape, although the loading lip is slightly stepped above the boot floor.

All models have a height-adjustable driver’s seat, while electric lumbar support and a passenger seat that also goes up and down arrive at ‘3’ grade. A tilt and telescopic steering wheel is standard range-wide, so getting a good driving position is a doddle.

You only have to get up to the affordable ‘3’ grade level to enjoy European satellite navigation mapping on a sharp seven-inch touchscreen, but a six-speaker sound system with DAB radio and MP3 compatibility is standard fit on every Ceed, as is Bluetooth. Android Auto and Apple CarPlay, Kia Connected Services featuring TomTom Live, rear parking sensors, and a reversing camera are all introduced on ‘2’ cars, while the well-equipped ‘3’ Kias get the Smart Parking Assist System (automated parking) and front parking sensors. As previously stated, the LCD cluster is found on all grades bar ‘1’ and ‘2’, but the GT hot hatch gets its own special display with a Performance Mode setting incorporated. The only real gripe here is the lack of an upgraded audio system of any form.

The Kia is quietly competent, but not outstanding for either ride comfort or handling. It does a good job of soaking up the lumps and bumps of British tarmac on smaller wheels, but the more attractive GT-Line variants on bigger alloys have firmer comportment. Still, overall refinement is good, with impressive suppression of wind and tyre noise, and the car is a stable companion on the motorway, thanks to its advanced multilink rear suspension.

It's not bad in the corners, either, but it’s never more exciting than that faint praise suggests. The Ceed has reasonable body control and lots of front-end grip, but there’s little to report in terms of a playful rear axle and, despite the sometimes firm ride, soft springing means the Kia leans a bit too much when you start to press on. Biggest handling bugbear of all is the Flex Steer set-up, which is unpleasant and incommunicative in all three of its settings. Both the basic ‘1’ Ceed models and the range-topping GT do without this, though neither of them has brilliant steering either – and the GT, while pleasant enough and a very good first-time ‘hot’ hatch effort for Kia’s C-segment contender, is no firecracker to drive.

Broadly speaking, for the engines you are going to want a turbocharged unit of some form, because the two normally aspirated petrol engines – the 99hp 1.4-litre and the 135hp 1.6 GDi option – are coarse and lacking torque. Handily, they’re only found at the lower levels of the Ceed tree, so you can easily avoid them by aiming at the more desirable spec grades.

That leaves three motors, two petrol and a solitary 1.6-litre CRDi turbodiesel, rated at 136hp and 207lb ft. That makes it the gutsiest engine in the range, eclipsing even the 1.6 T-GDi in the GT (it has more power at 204hp, but only delivers 196lb ft), and it’s a decent enough powerplant, if not the most refined diesel in the world.

Our favourite engine is the 1.0-litre T-GDi three-cylinder motor, which comes with either 100- or 120hp. You don’t really need the extra horsepower of the 120hp, because torque is identical on both three-pot motors at 126lb ft, and either of them are willing little performers with a great buzz about them. Performance is adequate too, as they’re about on a par with the CRDi engine for acceleration. The quickest Ceed is obviously the GT, but it’s not mega-rapid – it only just cracks the eight-second barrier for 0-62mph, clocking a modest time of 7.9 seconds.

Kia’s six-speed manual transmission is a fine gearbox, and the DCT is only available on the diesel engine anyway, where it makes little beneficial difference to the Ceed’s driving manners.

Good safety features are fitted across the board, including ESC, Vehicle Stability Management, ABS with Electronic Brake-force Distribution and Brake Assist System, Hill-start Assist Control, six airbags, two ISOFIX mounting points in the rear, and a tyre-pressure monitoring system. It’s a shame that items like Lane Departure Warning with High-Beam Assist, Speed Limit Information, Blind-Spot Detection, and Rear Cross-Traffic Alert are restricted to the upper ends of the Ceed spectrum, but that didn’t stop the car picking up the full five stars from Euro NCAP when it was tested in 2012 – polling scores in the high 80s percentage-wise for the safety of adult occupants and child occupants, and also safety assist features.

For grades 1 to 4, the standard paint is Bronze Metal, while for the GT-Line and GT cars, it’s Track Red. Fusion White and Phantom Black (both metallic) are available from top to bottom of the range, while Silver Frost, Planet Blue, and Infra Red metallic options are again reserved for the Ceeds without GT-Line/GT specification. Dark Gun Metal metallic is a mid-range hue, not found on the ‘1’ or GT variants, while – if you’re feeling brave – the sporty GT-Line and GT models can be specified in Yellow Flame metallic.

Then, aside from the connectivity upgrades we’ve already outlined, the ‘3’ adds dual-zone climate control, auto lights and wipers, faux leather door cards, and privacy glass. The most luxurious specification is actually ‘4’, which majors on the toy count over the GT-Line/GT models, as they favour sportiness and performance – so expect 17-inch alloys, leather seats (heated in the front, as is the steering wheel), keyless entry and go, an electronic parking brake, and rear ventilation among much more.

GT-Line and GT-Line S go for body styling and interior trinkets, while the GT has its own comprehensive specification. In essence, once you get to ‘3’ level, the Kia Ceed is a very well-equipped hatchback.

It’s a compact hatchback and so the Ceed should present no issues as regards its physical dimensions; excluding the mirrors, the body measures 1,780mm at its widest.

Residual values are about middling on the Kia – low purchase prices and the long warranty on the car help bolster them, but despite massive improvement in quality in recent years, the brand simply doesn’t yet have the gravitas of a marque like Volkswagen. Fuel economy ranges from the not bad – the 1.6 T-GDi in the GT manages around 38mpg with 170g/km CO2 – up to the excellent, as the other turbocharged engines all give anything between 57mpg and up to almost 80mpg in the case of the CRDi on small wheels; the resulting emissions ratings mean good Benefit-in-Kind tax for these cars. The normally aspirated petrol engines are not so impressive here, so that’s another reason to avoid them. Insurance groups are reasonable on all Kia Ceed models, no car sitting higher than group 29.

Kia is obviously confident because it offers a magnificent seven-year, 100,000-mile warranty on the Ceed – as it does on all its models. Both the company and the Ceed have a decent reputation for reliability, too, so it should prove a hassle-free car to own. Servicing the turbocharged petrol cars will be a more frequent occurrence if you’re a high annual-miler, as they can only go 10,000 miles without being looked at, whereas all other engines are rated for 20,000 miles. However, there’s a 12-monthly timescale for maintenance too, which negates this drawback if you do less than 10,000 miles a year.

With the prices of most C-segment hatchbacks at the high end of the teens and into the £20,000 ballpark, the Ceed's kick-off point just above £15,000 is hugely competitive. Most of the desirable mid-grade cars are around the £21,000 mark, though, so factor on that sort of price if you’re after the Kia. And, strangely, it’s not the GT performance variant that’s the most expensive; that’s priced at £23,810, but the ‘4’ trim CRDi with the DCT gearbox is getting on for £25,000 as standard.