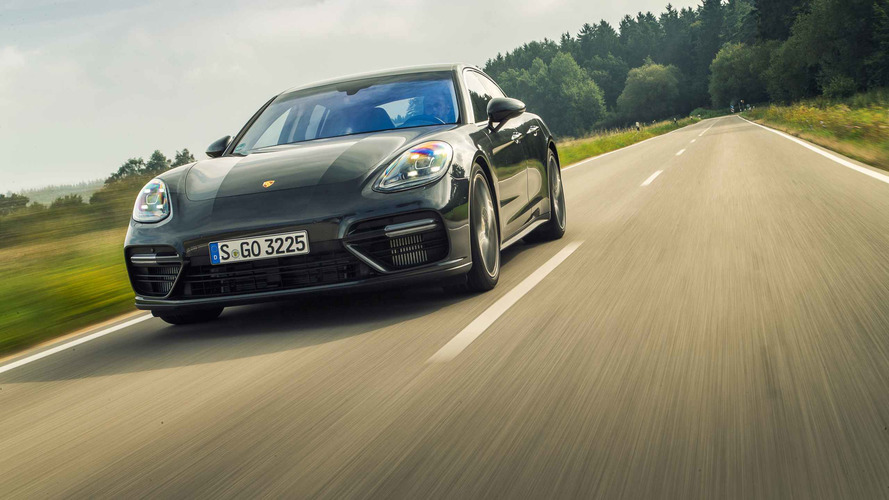 The Panamera is tasked with competing with everything from the Mercedes-Benz S-Class, BMW 7 Series, and Audi A8, to more sporting choices like the Maserati Quattroporte and the odd luxury SUV for good measure. A mixed brief, then, so the range is extensive, covering standard wheelbase, slightly longer ‘Executive’ models, and even a Sport Turismo estate model. All are automatics and all but the entry-level cars feature four-wheel drive, the powertrains including turbocharged V6 and V8 petrol units, a V8 turbodiesel, and a choice of two plug-in hybrids. All models are fast and capable; though climb up the range ladder and the 4S Diesel, Turbo, and Turbo S E-Hybrid offer eye-widening pace, mated to a chassis that allows you to exploit it.

Did you know? The Turbo S E-Hybrid is the first plug-in model to head a Porsche model range - delivering 680hp via its V8 engine and electric motor.

The Panamera is very much a Porsche take on the luxury saloon concept, bucking convention in the marketplace by focusing on the driver rather than those sat in the back seats. Porsche describes it as a sports car and, in fairness, there’s credence to that claim. The Panamera is fast in any form, and quite tremendously so in its highest performance versions. It is capable of using its prodigious pace too, thanks to a very accomplished chassis, the Panamera belying its size and weight and delivering astounding agility. The Panamera may not be able to offer quite the comfort and accommodation of class rivals like the BMW 7 Series and Mercedes-Benz S-Class, but, really, it doesn’t need to. Its breadth of ability is genuinely astounding: it can run flat out across continents at indecent pace, thrill on an alpine route, and park outside the smartest hotels among all the other glittering super, luxury and sports cars with impunity. The interior is beautifully finished, even if there’s only seating for four and the boot isn’t that spacious, though Porsche has gone some way to addressing that with its Sport Turismo model, which adds an estate variant to the Panamera line.

It is not unfair to say that, for all the previous Panamera’s ability and driver appeal, its looks took a lot of loving. The new Panamera has changed that, and while Porsche’s design philosophy is nothing if not predictably evolutionary, a stretch in proportions has allowed the 911-singature curves that define Porsche’s style to sit a lot more comfortably with this generation of the Panamera. Handsome and elegant, there’ll inevitably be a few doubters, but for most the Panamera is good-looking and desirable. The wider rear, with its sculpted four-point LED highlighted lights help, as does the Porsche badge across the strip that joins them, while the rear wing on the hatchback boot rises automatically at speed - the operation of the larger wing on the flagship Turbo and Turbo S E-Hybrid is a mechanical, aero origami ballet that we could watch all day long. Executive models gain 150mm in length, all of that between the wheels for a more accommodating cabin, though if you miss that, Porsche spotters take heart, as there’s an additional trim piece at the front of the door’s scallop that’s only on the longer Panameras.

Other visual differentiators as you spend more include larger alloy wheels and, on higher performance models like the Turbo, a more aggressive looking front bumper with larger cooling inlets, as well as different rear bumpers with more obvious aerodynamic accoutrements. The plug-in models get some hybrid badging and ‘acid’ green detailing like the brake callipers. The Sport Turismo, launched in 2017, is a useful and stunning looking estate to rival the Mercedes-Benz CLS Shooting Brake.

If you’re after the luxury of space then you’ll be better served elsewhere. The Panamera is not uncomfortable, and even the standard wheelbase models accommodate four adults with relative ease; it’s just not got the sort of vast, open space you’ll find in the back of an S-Class. That’s deliberate though, as the Panamera is designed to be the most sporting model in its class, and it feels it inside. The long wheelbase adds a little bit of useful legroom, Porsche addressing the limited headroom of the old Panamera by cleverly shaping the roof lining at the rear to offer more space, despite its more rakish external lines. Obviously the Sport Turismo benefits with its longer roofline extending in estate form over the boot, helping the cabin feel lighter and airier in the back.

The fit and finish are exemplary; the wide centre console reaches through the car’s length; the back seats are divided by a stowage area; while the Sport Turismo adds a fifth ‘seat’ in the middle of the rear. There’s haptic response buttons littered around the automatic gear selector, and the driver is faced with a pair of seven-inch screens in front of them, though the Panamera retains Porsche’s signature large analogue rev-counter prominently placed between them. In the centre of the dash there’s a huge screen for all the info and entertainment functions, which is a combination of touch-screen and button operated.

The Panamera’s focus isn’t practicality, but its 495-litre boot doesn’t trail its luxury class rivals by too much, and it’s accessed by a large hatchback rather than the saloon norm. Unlike most of its competition, the Panamera has split folding rear seats. Drop those and there’s a useful 1,263 litres of space on offer. If you want more practicality than that there’s the Sport Turismo estate, which both makes getting in and out of the rear easier thanks to its higher roof line and a luggage compartment that gains an additional 50 litres of storage. The hybrid models lose 95 litres of boot capacity due to their powertrains, however.

It’s taken a while for Porsche to catch up with its info and entertainment offering, but it’s done so with some real enthusiasm. The centre dash is dominated by a huge high-resolution display, Porsche going so far as to requiring you to use it to shift the air vents direction. While that might impress your mates once, afterwards it’s actually needlessly complicated, answering a question nobody reasonably asked. Included as standard are Porsche Communication Management with an online navigation model, Connect Plus, which incorporates Apple CarPlay, two USB rear sockets, Remote Vehicle Status, Carfinder, and WIFI internet access. There’s a 10-speaker audio system with DAB, cruise control, and Park Assist as well. Spend some more and you can add rear seat entertainment with dedicated screens, Bose surround sound, or Burmester high-end 3D surround sound.

At the core of the Panamera’s appeal is the fact it’s a Porsche, so the expectation is that it’ll perform like a sports car, despite its size and weight. You won’t be disappointed, either, as every Panamera is fast and agile, the highest performance models having the firepower and dynamism to take the fight to the very best super saloons. The entry-level model uses a 3.0-litre turbocharged V6 petrol engine, producing 330hp for a 0-62mph time of 6.3 seconds. Choose its Panamera 4 relation, which adds four-wheel drive, and that 0-62mph time drops to 6.1 seconds. The entry-level Panamera is the only rear-wheel-drive offering, Porsche’s engineers dictating that four-wheel drive is added to any Panamera with more than 400hp. The 4S increases the output of that V6 to 440hp for a 4.4-second 0-62mph time, the 4 E-Hybrid adding 22hp more thanks to its combined 2.9-litre turbo V6 and plug-in electric hybrid drive; it's not quite as brisk to 62mph as that 4S, but has the ability to cruise at up to 86mph (for up to 31 miles - though certainly not at the same time) on battery power alone.

Above that, the 4S Diesel makes a very convincing argument, its 440hp twin-turbo V8 diesel absolutely mighty, bringing any-gear (all Panameras are eight-speed PDK automatics) flexibility, while managing to sound fantastic while it catapults you forward with pace that's fearsome enough to have you wondering if you could go any quicker. You can, obviously, as the Turbo features a 550hp twin-turbo V8, a 3.8-second 0-62mph time, and 190mph top speed. Even that is bettered by the Turbo S E-Hybrid, which adds some 'spark' to the V8 Turbo’s performance for a scarcely believable 680hp and 3.4-second 0-62mph time, the top speed creeping up by 3mph, too. Porsche is typically conservative when quoting performance figures, preferring to do so in real-world conditions for repeatability, so all will be faster, while optioning Sport Chrono, which adds launch control, typically drops the 0-62mph time by around 0.2 seconds where it’s not standard equipment.

All Panameras come with Porsche Active Suspension Management, the adaptive dampers giving a choice of settings, though the Hybrids and Turbo models come with multi-chamber air springs in place of the standard steel springs, for more composure. The myriad of standard and additional options to allow the Panamera range to use their swelling power outputs is extensive, including not just that air suspension, but rear-wheel steering, torque vectoring and PDCC (an active roll-control system), and PCCB (Porsche’s carbon ceramic brakes) among others. However specified, it’s a car of unusual performance, masking its bulk and width with agility that’s remarkable; there are few cars with such a complete breadth of ability, living up to that sports car billing, yet being able to do so while still credibly competing in the luxury class.

The driver and front passenger get full-sized airbags, thorax airbags, and knee bags, and there are side curtain airbags running the length of the cabin. ISOFIX child seat mounts are on the outside rear seats and all models come with advanced traction and electronic stability control systems. The Panamera hasn’t been independently crash tested, but it should do well when it is. There’s plenty of availability of assistance systems optionally, including Adaptive Cruise Control, Porsche InnoDrive, Lane Change Assist and Lane Keeping Assist with Traffic Sign Recognition, LED headlights, High performance PCCB brake, and Night View.

Black or white are the standard, no-cost choices, while the metallic range encompasses 10 hues, with four ‘special’ colours in addition to that. Most are fairly restrained, as you might anticipate, but Porsche Exclusive will paint your Panamera any colour you wish, for a price.

All Panameras come with leather upholstery throughout, alloy wheels, and a decent level of connectivity and technology as mentioned earlier as standard. There’s still a lot of equipment on the options list, meaning you’ll easily spend 10-20 percent of the list price again if you’re not careful. That’s not unusual in this class, though.

Running costs will vary, obviously, depending on the model you pick. The plug-in hybrids make sense, with the 4 E-Hybrid emitting just 56g/km, while the Turbo S E-Hybrid is about the cheekiest, fastest way to dodge tax possible thanks to its 66g/km output. Real world they’ll both struggle to achieve their 113mpg and 97.4mpg official economy figures, but if you’re city-bound you’ve got a credible EV-only range for zero emissions. The Turbo will be cripplingly expensive to run, but then if you can afford to buy at this level, the costs associated with running these cars are incidental.

Huge intervals, with two years or 20,000 miles for minor servicing.

The Panamera is a luxury car, with a Porsche badge, so a double whammy on price. It’s not cheap, but then consider it’s potentially a sports car and a luxury saloon in one and you can convince yourself it’s a bargain. 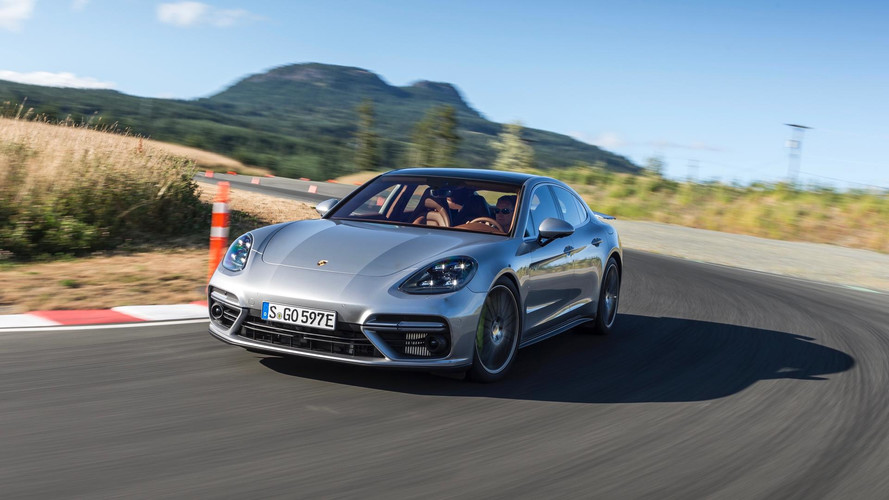