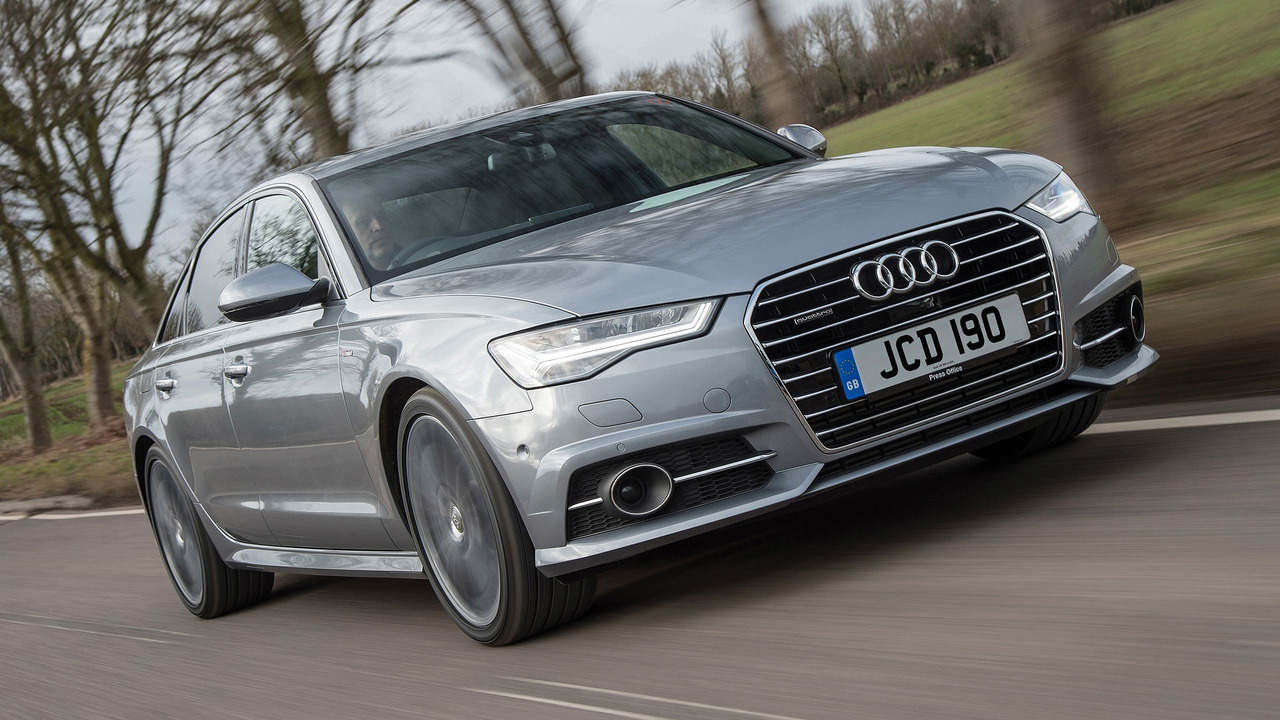 In the winter of its life - Does it go out with a bang or a fizzle?

Now in the final shadow of its life as one of the leading executive saloons, the Audi A6 has to tough it out with a whole host of newer contenders, not least the latest and pretty wonderful BMW 5 Series. This version of the A6 will be replaced in 2018, so until then it has to compete in a class where pretty much everything is fresher – Jaguar XF, Mercedes E-Class and many others. Yet it’s not the walkover of the Audi that you might have expected. Key aspects still stand out, plus, because it is nearing the end of the cycle, Audi has been throwing money and equipment at the A6 to maintain the appeal.

There’s something that – still – makes the A6 stand out from the crowd. The lines are pleasing in their minimalism, giving the Audi a classy yet unexaggerated appeal. The regular engines and transmissions do the job well, there’s a masses of passenger and luggage space, and then there’s the icing on the cake: the interior remains one of the very best, both in appearance and the way it all works. Acquire a new A6 through one of many heavily underwritten deals and this Audi can seem like something of a bargain.

So has car design moved on since this Audi A6 was launched in 2011? Obviously it has, yet to our eyes the A6 is still a good-looking car, in either saloon or Avant (estate) form. There is a simplicity and neatness to the lines, and the restyled light clusters front and rear that came with the mid-life facelift, that are sharp and distinctive, and rather better balanced than on many rivals.

Like all cars in the executive class, there’s an image thing going on here. Quite possibly you fall headlong for what Audi stands for, but maybe it’s the reverse, and you hate that persona. The massive front grille, which at one time looked so over the top in its physical presence, now seem quite normal. So familiar in fact, that when you see another Audi heading towards you, it’s hard to tell whether you are looking at another A6, or an A3, A4 or A5.  Blame it on the requirement for a “family look”.

The A6 undoubtedly looks more purposeful as you move up the range, with the bahnstorming RS6 Avant the equal of any BMW M5 or Mercedes-AMG E-Class. But on a more everyday level the S line and Black Editions offer a modicum of extra pizzazz for little extra cost.

It doesn't take the latest car design to guarantee space and comfort. The A6 has interior breadth and length that make you realise that this is a seriously more spacious place to travel than the Audi A4 – more business class than premium economy. Shoulder room in the front is great, and Audi’s intelligent interior design, where the dashboard seems pushed well away from the front occupants, increases the airiness.

It’s the dashboard area where Audi still manages to outclass pretty well all of the competition. The instrument panel is a work of art, carried over from the expensive Audi A8, with three-dimensional dials that no modern liquid crystal display can equal. Take a look inside the latest BMW 5 Series to compare. The switches all turn with a finely engineered click - you can sense that someone has spent days getting this feel just right. The paddles shifts behind the steering wheel might not get used often, but when you want to they shift the gears with an almost imperceptible movements of your fingers. It’s all simply nice.

The same goes for the central controls, from the central screen that powers forward and upwards out of the front of the fascia, to the easy to use heating and ventilation controls. If there is much plastic here Audi has done a brilliant job of disguising it, though if chrome isn’t your thing, you might as well head towards a BMW right now.

Buy a new A6 now and you’ll get kit that cost thousands as optional extras when the car was first launched. Latest cars get full electric front seats with memory, providing the degree of adjustment that will suit the tallest and widest, to the tiniest of drivers. The handbrake is electric and it sets itself when you switch the engine off, then releases as you drive away. There’s a hill hold feature, which is helpful in cars with manual transmission.

Legroom in the rear is generous, although the payback of that swooping roofline is back seats set a bit lower than is ideal for good thigh support. All round, the leather seats are nicely shaped and with well-judged padding, initially seem soft but with underlying firm support.

There’s a four-zone climate control system as standard, which means everyone should be comfortable. It works quietly and efficiently. But not everything is good. It would be very helpful if the nearside exterior mirror dipped itself for parking, for example – still the preserve of higher spec models.

The luggage space in the saloon is deep, wide and usefully square shaped so you can make the most of the available volume. Split folding rear seat cushions are now standard, which makes for a long, almost flat length through to the front seats. The Avant has full estate car capabilities, although its heavily sloping tailgate means it will be difficult to get big pieces of furniture inside. The boot lid opens via a switch on the driver’s door or the key fob. Under the luggage area is a space-saver spare – you’re unlikely to find one of these on the next iteration of the A6.

This is the area that a car designed over seven years ago is going to suffer. Let’s look at the positives first. There’s satellite navigation standard across the range, although unless you upgrade you are faced with a basic system with none of the size and detail of the upscale versions. But after a while you’ll find it works just as well. LED headlights are standard on S line and above, giving remarkable, clear white light.

Streaming music from a phone works well, and there’s a spare SD card slot on the dashboard, so you can load it up with 32gb of music from your computer for £10 and have dozens of albums instantly at hand. Sound quality on even the basic system is good, with a sub-woofer and some real clarity to the higher notes. A pity, then, that the DAB radio is so basic it doesn’t give you any information about what’s playing.

There’s a Parking Pack, which will slot the A6 in an available space, an Entertainment Pack that adds TV and screens in the rear, and various other packs that offer a bigger dashboard screen with Google Earth capability. iPod connectivity comes as standard.

If you want the full sound system, there a Bang & Olufsen Advanced Sound System for over £6,000, though the cheaper Bose surround sound comes as standard on the Black Edition.

The popular choice is the 2.0-litre TDI engine, recently upgraded to 190hp TDI Ultra specification. That’s a healthy power output for a 2.0-litre turbo diesel and although this is the basic offering, the performance is decidedly pleasing.

Part of the reason is the strong torque, with the result that even at low revs the A6 pulls away well and gets you up to cruising speed quickly. It’s remarkably quiet too, enhancing the feeling of quality you’ve already got from the interior. The nicest option is the seven-speed S Tronic automatic transmission, though there’s also a six-speed manual.

The base chassis doesn’t give the ride comfort you might hope for, with arguably the best model being the SE, which has the least sporty suspension settings. You can specify this suspension on the S line and Black edition for no cost. Or pay extra to get a more sophisticated adjustable suspension.

This comes along with the more power 3.0 V6 diesel, 3.0 BiTDI V6 and V8 petrol S6 models. The V6 diesel is very pleasant, though its extra performance over the latest 2.0 TDI is not that great. The S6 is so markedly faster that it qualifies for separate consideration completely.

Quattro four-wheel-drive is offered across the range and standard on the faster models. It’s a worthwhile option, for the front wheels can spin away at road junctions even on the least powerful front-wheel-drive A6.

Euro NCAP tested the A6 saloon in 2011 and awarded it a five-star safety rating. It scored highly across all areas, with 91% for adult occupant protection and 83% for child protection. The safety assist score was 86%, but the pedestrian safety rating a mere 41%.

But it’s in this area that the A6 falls behind more modern competition, even cars that are much cheaper new. There are few of the latest features, like lane change assist, autonomous emergency braking or radar assisted cruise control. You do get ESC stability control and ISOFIX child seat mountings. Light and rain sensors, an anti-theft alarm and full seatbelt monitoring are also included.

No fewer than 13 colour choices are offered on the Audi A6 saloon, but only two of them, Ibis White and Brilliant Black, are no-cost options.

The Audi A6 saloon is offered in SE Executive, S line, Black Edition, S6 and RS6 guises. In Britain, the S line is the popular variant, costing around £2,750 more than the SE Executive. The Black Edition is a typical highly specified variant introduced at the tail end of a model life. It’s a couple of thousand pounds more than the S line but adds big 20-inch alloys, privacy glass and Bose surround sound system.

S6 brings high levels of luxury and equipment, though you still get some good sports seats in the S line models. There is also the A6 Allroad, a jacked up four-wheel-drive quattro version of A6 Avant with a (touch) more off-road potential.

The Audi A6 saloon is a long car, almost 5 metres in length. Audi fits front and rear parking sensors as standard, a good job.

We’ll concentrate here on the diesel models, because the only petrol engines have massive V8 engines and economy doesn’t enter the picture. But for completeness, the S6 and RS 6 will supposedly average around 30mpg, with CO2 214g/km and higher for the S6, 223g/km for the RS6.

In contrast the diesels can be remarkably economical for such large cars. The 2.0TDI ultra saloon, with S tronic transmission, has a claimed figure of 67.3mpg. A manual gearbox drops this to 64.2mpg, and the bigger wheels of the Black edition knock off a couple more mpg. Quattro four wheel wheel drive is available only with the automatic gearbox and knock as much as 10mpg off the economy. Which is pretty much in line with what you can expect from the 3.0-litre V6 diesels – 55mpg. A nice touch is the free-wheel mode which you can instigate under one of the somewhat hidden dashboard settings.

The biggest regular expense may be topping up the emissions-reducing AdBlue additive tank on diesels. The rate of consumption is dependent on driving style; Audi warns it can require filling up between services.

Variable service intervals will help extend visits to the dealer for most A6 users. Drivers who cover mainly motorway miles can stretch them to as much as 19,000 miles or two years. More intensive urban users are recommended to have annual checks, though, with 9000-mile intervals.

Prices for the Audi A6 saloon are competitive with rivals though there’s the age of the car to factor in here. The A6 should be available at lower prices, and indeed it is, though you may find it hard to push your Audi dealer into the right level of savings. But brokers have some heavily discounted deals, especially if you are looking for a PCP or PCH.