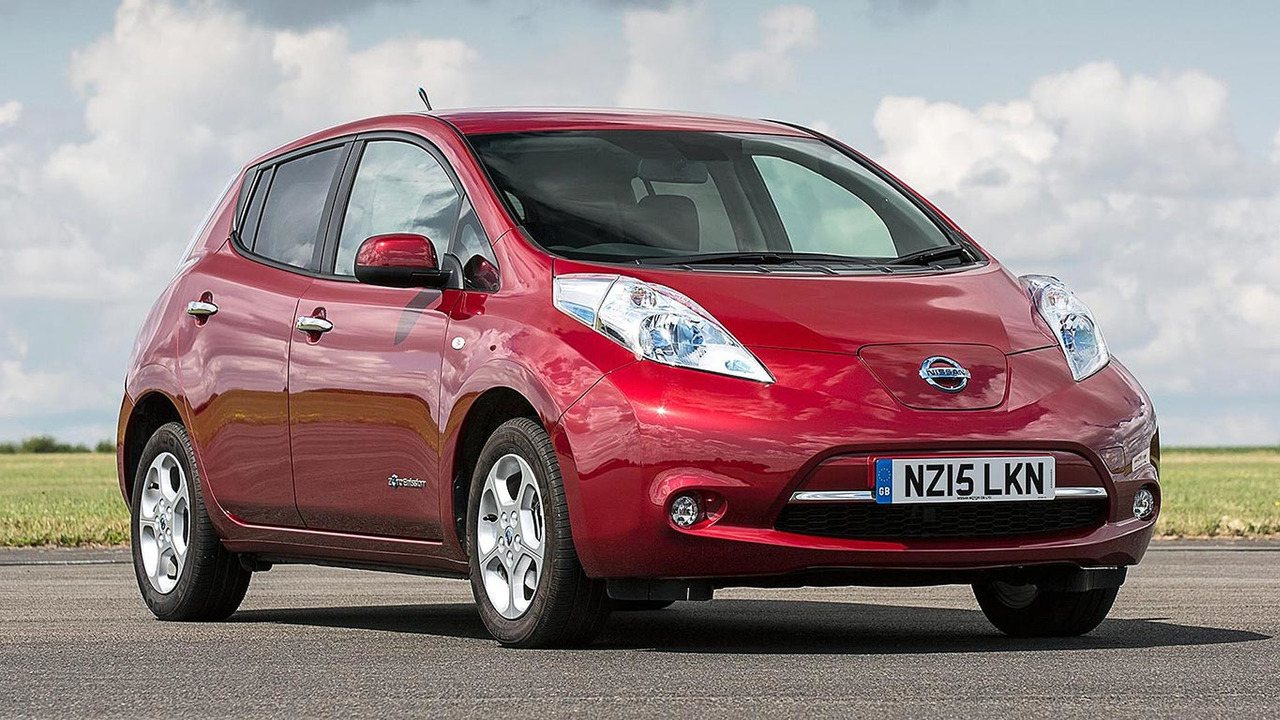 Before the Nissan Leaf, electrically-powered cars were little more than niche curiosities. The Volkswagen Golf-sized ‘Leading Environmentally-friendly Affordable Family car’ brought electric motoring to the masses when it was launched in 2010. This five-door hatchback now lays claim to being the world’s best-selling battery electric car.

Did you know? Despite its Japanese origins, the Leaf is built in the UK. The car and its batteries have been produced at Nissan’s Sunderland plant since 2013.

The Nissan Leaf has been phenomenally successful since its launch in 2010. At the end of 2016, global sales had topped 250,000 units – and it’s easy to see why. Simple to use, practical and with a usefully long electric range, the Leaf is an eminently capable electric car. Equally at home in urban areas as well as the open road, numerous updates have kept it a strong choice in this sector. And with two battery options and four trim levels available, there’s a Leaf to suit most needs.

The Nissan Leaf is the first purpose-built electric car from a major manufacturer. It was launched in 2010 and looked quite different in appearance to other family hatchbacks – while still acknowledging the standard five-door, sloping tail template.

Its overall appearance may be less distinctive in 2017, but it still looks different enough to stand out. From some angles it can appear ungainly, thanks to details such as the bug-eyed headlamps, while the lack of a front grille is perhaps the most obvious pointer to it being all-electric. Blue accents also highlight the car’s appetite for electricity.

Overall, the Nissan Leaf is more conventional in style than something like a BMW i3. But conventional seems to be the way Leaf drivers like it, as its status as the world’s best-selling battery electric vehicle confirms.

Like its exterior, the Nissan Leaf’s interior is more conventional than its powertrain might suggest. A gloss-black panel forms the centre console and houses a seven-inch colour touchscreen. Ahead of the driver, there are no conventional dials: a digital display ‘combimeter’ displays the all-important power and range information.

The only notable nod to the car’s powertrain is the centre armrest on which the quirky, ball-shaped gear selector sits. The cabin suffers from being a little dingy, as the door panels, headlining and pillars are unrelenting in their darkness. Quality is lower than a Volkswagen e-Golf, for example, but then that is reflected in the Leaf’s lower price.

The five-door-only Leaf is a practical five-seater. Legroom is more than adequate, and minimal intrusion from the ‘transmission’ tunnel benefits rear passengers. Up front, the seats are comfortable and offer a wide range of adjustment.

The Nissan Leaf has a practical, square-shaped 370-litre boot, although this drops to 355 litres when the optional Bose audio system is fitted, as the subwoofer is mounted across the back of the rear seats. The cables also take up space, being mounted in rucksack-type bags, and there is a lip to lift things over when loading up. All Leafs have 60:40 split rear seats for adding practicality.

Obviously, specific electric vehicle tech is included on the Leaf. This includes charging port illumination with a remote charging port opener, regenerative braking, a 3.3kw on-board charger and a port for 50kw DC charging at public rapid-charge stations. The car comes with both a three-pin/10A EVSE charging cable, plus a Mode 3 Type 2, 32-amp, seven-pin ‘Mennekes’ cable for fast charging.

Move up to Tekna trim and heated door mirrors, LED headlamps and a seven-speaker Bose audio system are added to the list. Options include a solar-cell rear spoiler and a 6.6kw on-board charger to allow 32-amp home and public charging.

The Nissan Connect EV touchscreen telematics system is standard on Acenta and Tekna models, enabling remote charging, eco-routing and pre-setting of the air conditioning. Available driving range and the locations of nearby charging stations are also shown. A Nissan Connect smartphone and computer app also lets you pre-heat or defrost the car, check the charge level remotely and monitor charging costs.

Just one electric motor powers the Nissan Leaf range, rated at 80kw or an equivalent 109hp. As with all electric cars, the Leaf’s 187lb ft of torque is available instantly. It surges forward with that familiar electric whine, reaching 62mph from rest in 11.5 seconds. Top speed is 89mph.

A pair of modes allow you to adjust the driving range. The default setting is Normal, while an Eco mode limits the output of the motor and air conditioning, while increasing the regenerative braking to achieve the best possible range. Performance suffers noticeably in Eco, though, the car feeling a little strangled.

Selected models also feature a ‘B’ mode on the gear selector that increases the regenerative braking still further, feeding power back into the battery when you brake or decelerate. In an electric car, you use the brakes much less than in a conventionally-fuelled rival, and as soon as you lift off the accelerator, the car slows down instantly – saving precious energy.

You’ll need to change the way you drive in the Leaf (or any electric car), but the adjustment to a more economical driving style is worth it. Range ‘gain’ and monitoring can become fun, as the distance you see between charges can increase, especially in warmer weather when the battery performs at its best.

On the move, the Leaf is refined and very quiet, even more so than most other cars thanks to its lack of a conventional engine. Wind noise is kept to a minimum. The ride is smooth and comfortable, but it can get caught out over larger bumps. The Leaf feels like a conventional hatchback to drive, which is good. Its steering is well-weighted – ideal for urban streets – while it feels secure and predictable in corners.

When it was tested in 2012, the Nissan Leaf scored a maximum five stars from Euro NCAP. Every version of the Nissan Leaf has a wealth of safety equipment, including ABS with electronic brake-force distribution and brake assist, as well as a full complement of driver, passenger, side and curtain airbags.

There is also an alarm, electronic stability control, an engine immobiliser, rear child locks and Isofix child-seat fixings, plus a special sound for pedestrians to signify when the car is near (being an electric car, there is no engine noise).

LED headlamps also contribute to the Leaf’s visibility, while the ‘Around View’ 360-degree monitoring system features four wide-angle cameras that display your surroundings from the front, side, rear and above. It’s brilliantly useful when parking.

Eight paint colours are available on the Nissan Leaf, with only Solid Red as standard. Metallic paint is a £575 option and you’ll pay extra for Blade Silver, Bronze, Gun Metallic, Magnetic Red, and Pearl Black. Storm White pearlescent incurs an extra charge of £745, while Arctic White solid paint is £250.

If you want to personalise your Leaf, mirror caps can be had in red, black, white, grey, purple, orange, carbon-look and chrome from £165. For more individuality, a £299 Design Pack consists of chrome or coloured mirror caps, as well as chrome door sills.

Entry-level Visia cars can only be had with the smaller 24kwh battery option. Building on the standard kit-list, Visia models come with four speakers, 16-inch steel wheels and black woven bio-fabric trim. A larger 6.6kw on-board charger is an option.

The Black Edition, a new 30kwh version of the Leaf, sits between Acenta and Tekna models. Based on the Acenta, and despite what its name suggests, the Black Edition is offered in Arctic White or Pearl Black finishes. Equipment includes 16-inch black alloy wheels, a black rear spoiler and mirror caps, blue-trimmed floor mats, LED headlamps, rear privacy glass and the ‘Around View’ 360-degree monitoring system. Available until August 2017, the first 1,000 Leaf Black Edition customers get an in-car wi-fi hotspot.

The Nissan Leaf is no larger than most family-sized hatchbacks, so it should fit in your garage just fine.

As they are electrically-powered, all Nissan Leafs have CO2 emissions of 0g/km, meaning that they are free of Vehicle Excise Duty (road tax) costs both now and when new groupings come into force on 1 April 2017. This is the same for all zero-emission cars. The two battery options on the Nissan Leaf offer official ranges of 124 miles (24kwh) and 155 miles (30kwh), although expect these figures to drop by around 30 miles in ‘real-world’ conditions.

Like an internal combustion car, the Nissan Leaf’s range depends on how carefully you drive it. Only when it requires refilling, it’s not petrol or diesel that is put in, but electricity. Which means the cost to charge a Leaf at home varies depending on individual energy companies, and the particular tariff you’ve chosen.

A 32-amp wallbox is recommended as it facilitates faster charging, but as the car comes with a three-pin cable, every property should be able to charge it. A wallbox costs from £279 with the Government’s Office of Low Emission Vehicles’ discount, bring ‘refuelling’ costs down to as little as £1.05 per charge. Nissan quotes an annual home ‘refuelling’ cost of £260.

You can recharge the Nissan Leaf in public places where there are charge points, but with no standardised pricing structure, some are free while others incur a fee to use. Similarly, some networks require membership, which can incur an annual charge. Running costs for the Nissan Leaf vary between 2p and 5p per mile – again, dependant on where it is charged and the battery’s range.

Charging time for the Leaf varies depending on which method you use. Find a rapid charger on the public networks and the car will reach up to 80 per cent in around 30 minutes. Charging overnight at home using a 32-amp wallbox can take between seven and nine-and-a-half hours. With the on-board 6.6kw charger installed, though, this drops to between four to five-and-a-half hours, depending on battery capacity. Charging with a three-pin plug cable takes 12-15 hours.

Since it was launched in 2010, the Nissan Leaf has enjoyed a good reputation for reliability. In 2015, a report found that of the 35,000 Leafs sold in Europe, only three had suffered a complete battery failure. That’s 0.01 per cent, compared to an average ‘immobilisation’ figure of 0.0255 per cent for conventional cars.

The Leaf’s lithium-ion battery warranty protects against capacity loss – less than 9 bars out of 12, as shown on the car’s capacity gauge – for a period of five years or 60,000 miles for 24kwh cars, or eight years/100,000 miles for 30kwh models.

A range of extra-cost service plans and warranties are also available, and Nissan promises to provide EV roadside assistance for free every time the Leaf is serviced at an approved Nissan dealership. The Leaf can be rapid-charged at participating Nissan dealers for free, and a petrol or diesel car is also available, free of charge, for up to 14 days during the first three years of ownership.

As the Nissan Leaf is an electric car that emits zero carbon dioxide (CO2), it qualifies for the Government’s Plug-in Car Grant (PiCG). This currently reduces the cost of zero-emission cars with a minimum electric range of at least 70 miles by £4,500. For example, the Leaf Visia 24kwh’s ‘on the road’ price is £26,180, but once the PiCG has been applied, this is reduced to £21,680. For clarity, we quote prices AFTER the PiCG here.

All these prices are based on owning the battery outright with the car, but Nissan also offers ‘Flex’ versions of the Leaf, which are exactly the same as the standard car and its trim levels, but differ in how the car is paid for. This leasing option reduces the overall cost of the car by £5,000, but also incurs an additional charge for the battery, as it remains the property of Nissan. A typical 36-month plan starts at £70 per month for a limited 7,500 miles per annum, rising to £93 for a 12,000-mile plan.