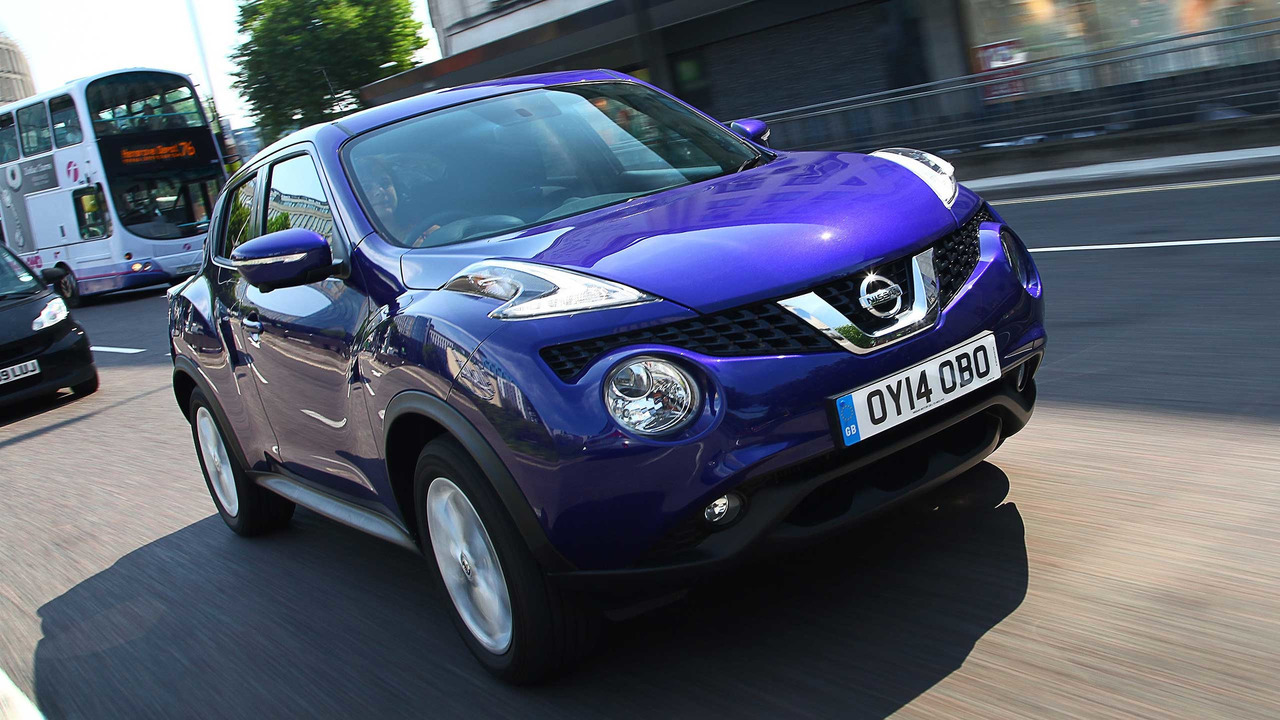 A crossover and proud of it.

The Nissan Juke intentionally doesn’t look quite like any other small car on the road. This was another sector-defining car from Nissan when new, which continues to sell really well even well into its lifecycle. Being built in Britain adds further homegrown kudos to the car that’s inspired umpteed imitators.

Did you know? The Nissan Juke is not only built in Britain, it was also engineered here - and it’s British-designed too, at the firm’s Paddington studio.

The Nissan Juke, like the larger Qashqai before it, started a trend. Defined as a crossover, it helped introduce regular hatchback buyers to the pleasures of an SUV-like high seating position and tough stance on the road. Sales figures since launch, and an ever-growing roster of rivals, suggest the Juke hit the spot. It’s not in its first flush of youth so some flaws are evident, but it’s still a tempting alternative for Ford Fiesta buyers who want something cooler-looking - indeed, style remains its defining trait. It’s no wonder the Juke is no stranger to the UK top 10 best sellers list.

The Nissan Juke remains a unique-looking machine, even several years after launch. It has bulging wheelarches, split headlights that combine big round lamps with units that look like a crocodile’s eyes peering over water, a squat rear and, generally, lots going on wherever you look. It’s striking in the extreme and can be made even more standout by choosing a vivid body colour such as bold yellow or red. Despite being such a strong seller, the Juke still turns heads. Not bad for a first launched back in 2010.

The mark of a successful design is one that looks good in all trim levels: the Juke succeeds here, because even the basic versions look little less standout than the range-topping Nismo models. Design purists may bristle at the sheer freneticism of the design, but it seems car buyers have no such qualms, and are still picking the Juke over more conventional, less striking-looking models. Who said the Brits were reserved?

The bold look of the Juke continues inside. The standout is the painted-look (it’s actually coloured plastic) centre console, which houses the gearlever and cupholders. This has been formed to mimic a motorcycle fuel tank, and remains a talking point even years after the Juke’s launch. Twin-binnacle dials with a freestanding hood are also cool, as are the central controls which are shaped into a single semi-floating panel. Those in the front will love the bucket-style seats as well.

Thing is, it’s also starting to show its age. Some of the details are a bit clunky by modern car standards, lacking the sophistication of newer models. Some of the plastics are rather downmarket and cheaply-finished, and some of the displays lack the sharpness and clarity you expect from contemporary cars. But the Juke also has a bigger flaw...

In terms of practicality, the Juke is very much style over substance. This is not so bad in the front where, save for some appalling visibility blindspots, the driving position is generally acceptable and space broadly ample (although the lack of steering wheel reach adjustment is unforgivable).

It gets worse in the rear. OK, it’s a compact crossover, but it still really should offer more space than it does. The cabin is gloomy too, because of the small windows and thick rear pillars (the fiddly doorhandles are concealed here), an effect made worse if you pick a version with dark rear glass. Superminis are light and airy: the kids may be in for a surprise if you switch to a Juke instead.

The Nissan Juke used to have an appallingly small boot. Since its mid-life facelift, it has improved, but it’s still far from commodious. It’s significantly worse if you choose the 4WD Nismo version too (because of the rear-drive system and its standard space-saver spare: all other models have a puncture repair kit), although its height off the ground and a flat sill means it is at least easy to load. Split-fold seats are standard as well.

The Juke doesn’t fare too badly for technology, considering its age, although you have to choose the right models if you want the best tech. Stick, for example, with the standard car, and all you get in terms of connectivity is a basic FM stereo, an Aux socket and… that’s about it. You have to move up to Acenta trim to get Bluetooth phone connectivity and a USB port.

Things get better with the N-Connecta. As its name suggests, this comes as standard with the NissanConnect touchscreen infotainment system, which includes a 5.8in touchscreen and DAB radio. NissanConnect comprises sat nav, integration with some of your smartphone apps and audio streaming via Bluetooth. It’s not Apple CarPlay or Android Auto compliant, but will hook into your device’s music library more comprehensively than a simple USB hookup.

Interestingly, you can only get the NissanConnect system on N-Connecta and above; it’s not an option on lesser Visia and Acenta trims. This means that if you want a Juke with contemporary tech and connectivity, you need to spend around £18,000 at the very minimum.

The Juke drives competently, but you can tell it’s a model designed back in 2010. It rides OK in town, provided you avoid big wheel options - its extra height gives more space for decent suspension travel, which does a decent job of soaking up broken British roads. A semi-sporty setup helps keep the body under control at speed too.

Handling is on the soft and rather lifeless side, though. Feedback through the controls is scant and the Juke doesn’t have the crispness of a more modern car. It’s chuckable, but you won’t draw enormous satisfaction from doing so - and while the racy Nismo models have higher reserves, they’re also harsher and more frenetic.

Engine-wise, the base 1.6-litre petrol engine is a bit athematic. You’re much better off going for the 1.2-litre DiG-T 115 turbo engine: it may be smaller than the 1.6, but it has significantly more pulling power delivered at half the revs of the 1.6, so is far nicer to drive in everyday conditions. You can get a 1.6 turbo with up to 218hp, but it’s too much for the Juke and won’t give you a huge amount of satisfaction.

There’s a diesel too: the 1.5-litre dCi 110 familiar from other models in the Renault group. It’s sounding a bit clattery these days, but performs well enough in the Juke. Trouble is, claimed economy apart, it doesn’t do much the more refined 1.2 DiG-T doesn’t do - so we’d stick with petrol.

Our advice is to stick with a manual gearbox Juke, too. The Xtronic gearbox that’s offered on some models is a CVT-type gearbox, so will feel like it has a permanently slipping clutch on the road. There’s also an all-wheel drive version, called ALL-MODE, but you can only get this on either the 190hp 1.6-litre turbo or the Nismo.

The Juke is looking a bit light on safety features these days. It does have a five-star Euro NCAP safety score, but this dates back to 2011, and standards were not as strict then as they are now. For example, the Juke was praised for having ESC stability control fitted as standard - but that’s now a requirement for all new cars sold; and you can’t get contemporary features such as autonomous emergency braking in the Juke.

Real-world safety still benefits from the high seating position that affords better forwards visibility, and it’s unlikely the Juke’s strong occupant protection figures will be much less relevant today than they were when new. Rear visibility is more of an issue, which can impact on low-speed safety: Nissan has a fix here though, with its clever 360-degree ‘around view’ parking camera system.

The base Juke is the Visia, which the image-conscious will be pleased to learn comes with standard LED daytime running lights. It also has air conditioning, 16-inch alloys, all-round electric windows and remote locking.

Visia is otherwise pretty meagre, though. Most buyers easily justify the trade-up to Acenta, which gets them bigger 17-inch alloys, Bluetooth, rear privacy glass, steering wheel audio controls, cruise control and climate control: the dashboard looks much more comprehensive by having the digital climate control panel.

N-Connecta is the most desirable trim. It has DAB and the NissanConnect infotainment system, plus a colour reversing camera, auto headlights and wipers, keyless go and, just to make the interior darker still, a black rooflining. Spruce it back up with the standard Nissan Design Studio interior pack - pick either a black, red, white or yellow centre console, gearknob, door trim panels, air vent rings, with coloured trim stitching to match.

At 4135mm long, the Juke is a little longer than the sub-four metre supermini norm. It’s also naturally taller at 1565mm, but width is still kept under control despite the flared wheelarches.

The Juke isn’t as fuel-efficient as more modern cars. The base petrol engine averages a middling 47mpg and even the downsized 1.2-litre turbo can’t crack the 50mpg mark. Diesels are better, though, averaging up to 70.6mpg and emitting 104g/km. The Nismo is a sub-40mpg model though, which doesn’t look great when you consider a more powerful Golf GTI can average nearly 50mpg.

No Juke comes with engine stop-start, although they do all feature a gearchange indicator, in the most token nod towards real-world fuel efficiency.

Nissans are generally reliable and the Juke is no exception. Its mechanicals are well proven and it’s been in production for long enough to ensure any issues have long since been ironed out. Owner satisfaction surveys generally bear this out, with no major issues to report.

Don’t be misled by the headline prices. You can get a Nissan Juke for around £14,500, which doesn’t look bad compared to a mid-spec Ford Fiesta, but to get the Juke you’ll really want to live with, you need to spend thousands more. The cheapest 1.2 DiG-T model, for example, is over £16,000 and the N-Connecta start at almost £18,000. The cheapest diesel is almost £16,500 and the cheapest diesel with a decent amount of equipment is also £18k.

Prices for the Nismo models look extremely ambitious. The manual model is £23k and the all-wheel drive autois £25,000. No wonder they are a rare sight.