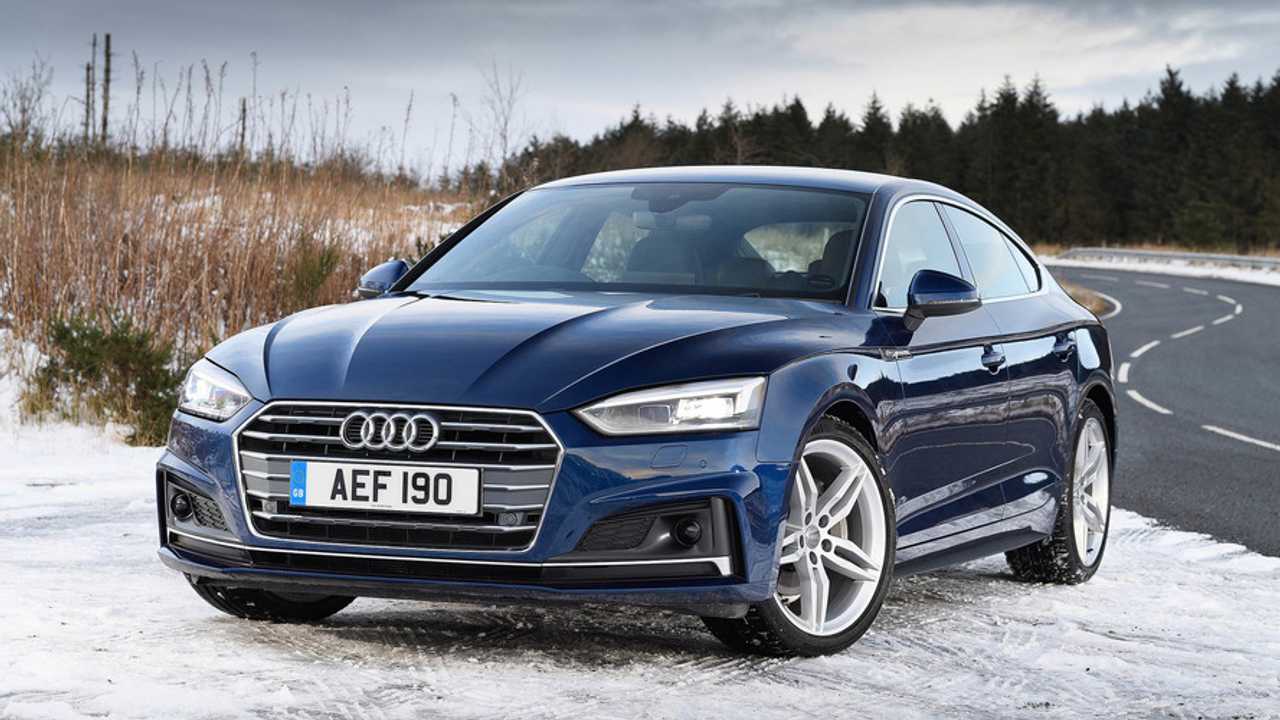 Building on an already stylish and successful predecessor.

Audi hit upon a winning formula with the A5 Sportback. It offers coupe-like looks, but also the practicality of four passenger doors and a roomy hatchback boot. This opened up the coupe market to a much broader range of people, and helped popularise the stylish A5 range as a result. It’s no wonder so many rivals have since copied the layout…

Did you know? The Audi A5 Sportback costs exactly the same as the A5 coupe. Buyers thus have a straight choice between two doors or four.

The second-generation Audi A5 Sportback was new for 2017. It builds upon the stylish looks of its predecessor and aims to be even sleeker and better-integrated. The rear doors flow more neatly into the coupe-like roofline, making it even more appealing to those who want stylish space – the sort of practicality-constrained people who might want an A5 Coupe yet would otherwise buy an Audi A4 saloon if the Sportback wasn’t offered. Beautiful inside and with a broad range of abilities, it’s not the most exciting car to drive, but thriving sales suggest people don’t seem to mind.

The latest Audi A5 Sportback is smoother and classier than ever. Building upon the elegance of the original, Audi has added clean yet complex surfacing featuring beguiling curves and muscles, particularly around the rear haunches. It works well with the smooth coupe fastback rear, into which Audi has even more neatly integrated the rear doors: it’s more like a two-door coupe than ever.

The technological precision of Audi’s design will delight purists. It has a premium, expertly crafted look that’s enhanced by flawless paint quality and some extremely neat attention to detail – particularly on the sporty S line models. The one criticism is that it initially looks rather similar to its predecessor, although spend time with the model and its subtle evolution becomes more clear.

The Audi A5 Sportback shares an interior with the Audi A4, which is good news: it’s an exceptional cabin. Built to an extremely high standard, it puts Audi at the top of the class for quality, by a clear margin. Just as with the outside, the attention to detail is superb, with even the heater controls having a precision-crafted feel and high-tech look.

Dials are clear, the infotainment is intuitive and it becomes even more impressive when you pick the Audi Virtual Cockpit digital instrument setup; more on that later. The only unusual part for the driver is a seating position that feels more saloon-like than authentically coupe-like. You sit too high and feel like you’re towing over the dashboard a bit more than you’d expect: comfortable as they are, the seats don’t lower down as much as they should.

This is a surprisingly spacious car inside. With a four-door coupe, you expect a few compromises, particularly in the rear. But apart from being a little tricky for tall people to get in and out of, due to the sweeping roofline, the A5 Sportback fares surprisingly well for rear seat space. There’s not much less room in there than an A4 saloon, making it a realistic alternative to the four-door model for those seeking a bit more space. The rear seat accommodates three people, unlike the two-seat rear setup of the A5 Coupe.

The hatchback rear automatically makes it more practical than an A4 saloon. The 480-litre space is not far shy of a Ford Mondeo’s mammoth boot, and a 40/20/40 split fold rear seat is standard on all models. Audi fits an electronic tailgate as standard too: you can open it using a button on the remote, close it by pressing a button within the tailgate, or both open and close it by operating a switch on the driver’s door.

For technology and connectivity, Audi is once again a front-runner. Every model is fitted with Audi’s MMI Radio Plus system with a 7in colour screen mounted high up on the dash. Apple CarPlay and Android Auto smartphone connectivity is standard, meaning you can control your smartphone using the MMI dial or even via standard voice control (this is operated bia a button on the steering wheel). Other standard tech features include Bluetooth interface, Two USB sockets, cruise control with speed limiter, auto lights and wipers plus an emergency call system called Audi Connect Safety and Service: a 10-year contract is standard with every new model.

If you move up from base SE to Sport and above, MMI Navigation is included as standard. It has 3D mapping and dynamic route guidance that helps avoid traffic jams. A three-month trial of Audi Connect Infotainment Services is also thrown in - this adds 4G internet access, Google Earth and Google Street View mapping, in-car Google and Twitter access plus umpteen other connected car features - certainly enough to make subscribing once the trial period is up worth considering...

If you’re choosing a Sportback coupe for a combination of svelte looks and sporty handling, you should perhaps look to something like a BMW 4 Series Gran Coupe instead. The Audi is extremely competent and capable, but it doesn’t have the sporty feedback enthusiast drivers might like. Eager drivers would prefer the base car to be rear-wheel drive rather than front-wheel drive as well; higher-spec models come with quattro all-wheel drive.

The engine range is broadly in line with other Audi family models: TDI turbodiesel engines are heavily represented. The range opens with a 190hp 2.0-litre TDI, which you can take either in regular or lower-CO2 ultra guise (the chief difference is ultra low rolling resistance tyres on ultra versions, which limits the size of alloy wheels you can pick; you also get lower, stiffer suspension). Have this either with six-speed manual or seven-speed S tronic transmission, and front- or four-wheel drive.

All A5 Sportback drive in a similar way. WIth plenty of confidence and refinement but not much driver interaction. The steering is accurate and consistent, but you don’t get the feedback you do in a BMW, and handling is grippy and confident but not really much fun. It’s a car that instead rides very well (so long as you avoid big wheels) and, with optional adaptive dampers, displays superb body control over undulating roads - it’s a car made for covering long distances with little effort.

The A5 Sportback itself hasn’t been tested by Euro NCAP, but because it’s so closely related to the A4 saloon, the safety body allows the same five-star rating to apply. This means the A5 Sportback boasts an excellent 89 percent score for adult occupant protection and 87 percent for child protection, while a pop-up bonnet when struck by pedestrians helps it score 75 percent for pedestrian safety.

Safety assist systems are included on all models too. Audi’s Pre-sense City tech uses a camera to detect impending collisions and warn the driver. If they don’t respond, and speeds are below around 50 mph, the car will emergency-brake to either mitigate or avoid the crash entirely. There’s also a system that, once a collision does occur, auto-initiates full braking to try and avoid further collisions. Because when you’re in a crash, there’s a risk you may be too distracted to brake at full power...

A full range of 17 colours is available on the A5 Sportback, and not all of them are silver or grey, either. Free choice is restricted to two solid colours, either Ibis white or Brilliant black. Then it’s £645 for a choice of metallics: Glacier white, Floret silver, Cuvee silver, Monsoon grey, Manhattan grey, Mythos black, Gotland green, Argus brown, Scuba blue, Moonlight blue, Tango red, Matador red, Daytona grey, Navarra blue or Misano red. Phew.

Some colours are restricted to certain trims. You can only get Navarra blue or Misano red on the S5, for example. Daytona grey is restricted to S line and S5. And Audi won’t let you have colours such as Argus brown or Matador red on an S5. Sorry, fans of fast brown cars.

The one key omission on an SE is sat nav. It’s standard from Sport trim, along with leather sports seats, silver dash inlays, Audi Connect connectivity and an alternative design of 17-inch alloy wheel. You also get ambient lighting and ultra-bright LED interior illumination within the Sport model.

S line models are sportier-looking. They have larger 18-inch alloys, LED headlights, S line bodykit and, inside, sports seats with leather and Alcantara S line upholstery. Sport suspension is also offered, although you can have regular suspension as a no-cost option if comfort is more important. S5 models go further still, with 19-inch wheels, widescreen 8.3in MMI Navigation Plus, and premium trim throughout including Nappa leather upholstery.

Compared to the A5 Coupe, the A5 Sportback is longer overall, by 60mm. That’s because it has a longer wheelbase, which is how it’s able to boast more rear seat space than the Coupe. It’s 15mm taller than the coupe as well, and an insignificant couple of millimetres narrower.

The S5 is a little longer and a tiny bit lower than the regular Sportback, but it’s exactly the same width. No classic Ur-Quattro-style flared wheelarch extensions here, sadly.

It’s good news across the board when it comes to running costs and economy. For starters, the A5 Sportback boasts good retained values, which helps keep leasing and PCP costs down, and mitigates overall monetary losses if you’re spending your own cash.

The really good news is fuel economy. You can get an A5 Sportback that returns as much as 68.9 mpg on the combined cycle, and emits as little as 106 g/km CO2. That’s for the 2.0 TDI ultra models, although there is a price to be paid - their tiny 40-litre fuel tanks limit range somewhat. All diesel models also use AdBlue NOx-reducing additives, which may need replenishing in between services.

The big positive with the A5 Sportback is the fact Audi’s price-matched it with the A5 Coupe. You don’t have to pay extra to get four doors instead of two - and that’s despite the Sportback coming with a handy electric tailgate over the Coupe. Audi has kept the jump up from SE to Sport down to £1900, which is impressive given the extra connectivity and smarter sports seats of the Sport, and moving up to S line costs even less - just a £1650 premium. It’s easy to see why so many are tempted.

The A5 Sportback costs around £3000 more than a comparable A4 saloon, which may put it out of the reach of some company car drivers. Its ample equipment levels do mean you don’t need to add on lots of extras in order to bring it up to standard - even if the sprawling A5 Sportback price list has been designed to provide page after page of temptation.