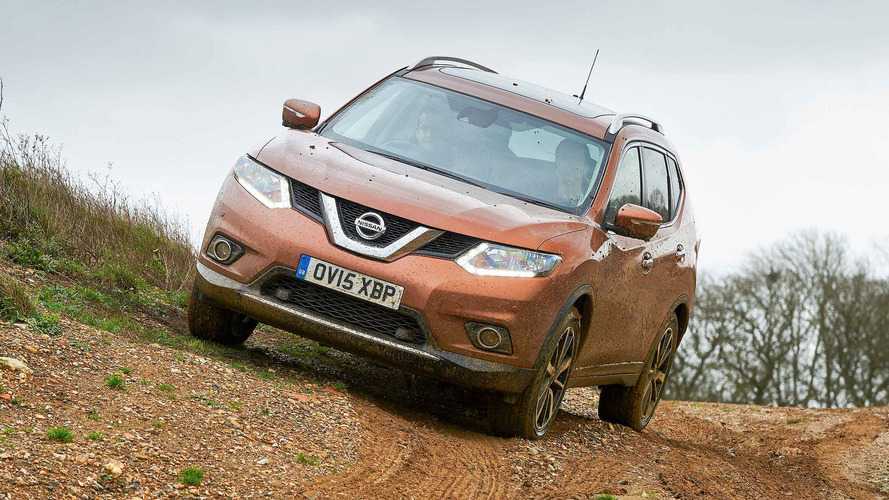 Living in the shadow of the Skoda Kodiaq and Peugeot 5008.

The current Nissan X-Trail was born out of the reorganisation Nissan undertook in the wake of the Qashqai’s unprecedented success. A failed experiment with a seven-seat Qashqai (called Qashqai+) was dumped in favour of leaving the X-Trail as the sole seven-seater in the range, focused on maximum interior space and engine efficiency in the modern Nissan fashion. It’s also offered as a five-seater for more boot space, and it faces stiff competition from the Skoda Kodiaq and Peugeot 5008.

Did you know? Although it has SUV styling, most X-Trails sold in the UK are only front-wheel drive for higher fuel economy

The Nissan X-Trail’s main attributes are space and comfort, of which is has plenty. Big, well-padded seats and a good ride quality take care of everyday comfort, while the square body design makes sure there’s plenty of elbow room for everyone. Its problems are a lack of driving engagement, a lacklustre interior design and the fact that two out of the three engines leave a lot to be desired for outright performance. It’s a workhorse designed to make family life easier and it does so, but a Skoda Kodiaq or Peugeot 5008 offer better engines and interior finish for much the same price.

The X-Trail’s latest look is based on the Qashqai’s styling, but in this scaled-up size, it doesn’t seem to work as successfully. It loses some of the sharpness that suits the Qashqai so well, and ultimately looks quite bland, especially in white. The flat faces of the wheelarches look at odds with their curves, and the effect of twin shoulder lines is clever but doesn’t do the car any favours from the front three-quarter angle.

Up front, the detailed LED headlight clusters on range-topping models add some much-needed garnish to a grille design that already looks dated. At the back, the flat tailgate is much better for the addition of a spoiler at the top, and the kinked C-pillar is a stylish touch. The larger, 19in wheels are essential, though, to balance the car’s proportions.

Headroom shouldn’t be an issue in any seat, but the marketing photography often makes the rear seat area look more spacious than it really is by moving the front seats forward. In truth, there is loads of space anyway because the seat bases are quite long, reducing the need for lots of empty space between them and the front seatbacks; it’s just that the latter gets the impression of spaciousness across better. Adult middle-row passengers should have no complaints.

The front seats in particular are chunky and well-padded, with plenty of adjustment to allow the ideal driving position. Reach and rake adjustment at the wheel also adds to the flexibility.

Nissan’s designers have penned a dashboard and console that is practical, well laid-out and intuitive, but it lacks any sort of design flair other than silver plastic air vent surrounds. The shape and overall look is very ordinary, but its supporters would say that it does the job without unnecessary frills. At least the gear lever is positioned relatively high for a more comfortable shift action.

The powered tailgate doesn’t feature as standard until the N-Vision trim grade in the middle of the range, but the boot within is spacious enough for most people. A basic capacity of 550 litres is surprisingly left behind by the Skoda Octavia hatchback (580 litres) and Volkswagen Golf Estate (605 litres), but a high roof and squared-off rear end mean the X-Trail is more practical than the numbers suggest.

A standard ‘luggage board’ system allows the boot floor to be disassembled and rebuilt in 18 different ways to separate items and/or stop them rolling around. It’s a superb feature in principle but you often forget to use it until after your bags are inside.

In four-wheel drive guise the X-Trail can easily tackle light-off-roading and farmland work, with a two-tonne towing capacity for the manual 4x4 diesels bettering that of the automatics and the front-wheel drive versions, with the exception of the cheapest manual diesel, which matches the 4x4s.

The range starts off without navigation but has an electronic handbrake, a basic colour 5in screen and cruise control, plus air conditioning and a well-equipped stereo that has a CD player, a USB port and Bluetooth, but only four speakers. It feels a little low-rent on the technology front but covers the basics.

In the meat of the range and upwards the X-Trail has a fantastic spread of standard kit. The main screen is upgraded to the NissanConnect 7in touch-screen unit that brings DAB radio with it, although this system isn't offered with Apple CarPlay or Android Auto and it's got some quite fiddly, small icons on it that make it harder to use than equivalent systems in the Skoda Kodiaq or Peugeot 5008. Plus, you get nav as standard lower down the range in those two rivals. There’s also a powered tailgate, automatic headlights and dual-zone climate control. Front and rear parking sensors are also standard.

The real highlights are the Around View Monitor, which gives a 360-degree bird’s eye view of the car and any obstacles around it, and stunningly effective bi-LED headlights that cut through the night with a natural colour of light to ease eye strain. Around View Monitor is so effective you can blank every window off and still manoeuvre the car safely around at low speed. It’s accurate, too.

There are two diesel engines and a single petrol, added to the range some time after the car was launched. The power and torque figures look adequate on paper, but the 128bhp diesel and 160bhp petrol are just too feeble to do the X-Trail justice, and that’s before adding a car full of passengers and luggage.

That leaves two choices: either over-work the two cheaper engines, or plump for the more powerful 2.0-litre diesel, which is better. It has more torque and a lot more oomph continuing into the upper reaches of the rev range, letting it pull the car, loaded or otherwise, much more effectively. Even so, it’s still not fast, and all three engines are similarly devoid of character. In this category, the X-Trail feels more like white goods than a desirable car. To add to that, the CVT automatic gearbox is a long way off the standard set by the dual-clutch gearbox in the Skoda Kodiaq.

Handling isn’t brilliant, either. To give it credit, the X-Trail does show off a lot of grip and doesn’t roll as much as a car of this size might, but the steering offers little feedback and the chassis is inert, robbing the experience of any flavour.

An electronic handbrake and a speed limiter join complex Vehicle Dynamic Control stability control that takes the X-Trail’s size into account when intervening. On the two more basic trim levels the Smart Vision Pack is optional, but at least it’s offered. It consists of Traffic Sign Recognition, Lane Departure Warning and Forward Emergency Braking. You'll get Forward Emergency Braking as standard on every model on key rivals, though.

Active Engine Brake, Active Trace Control and Active Ride Control all work actively to stabilise the car in various situations, while in the cabin there are six airbags. No driver's knee airbag, though - another standard feature on some rivals.

Further up the range, the Smart Vision Pack becomes standard along with automatic headlights, the excellent Around View Monitor and more, but it’s not until top-spec Tekna that safety systems like Blind Spot Warning and Moving Object Detection are included.

Euro NCAP rates the X-Trail highly, awarding it five stars. It should be noted, though, that despite good scores across the board, its 86% for adult occupant safety is a little way behind the very safest cars.

The one solid paint choice as standard is Chilli Pepper, a bold red that doesn’t really need to be changed. Storm White and Universal Silver, pearlescent and metallic respectively, only make the car look blander, but the beautiful dark green Titanium Olive metallic and Gun Metallic are much better. Ebisu Black and Copper Blaze metallics are also good, but Haptic Blue metallic doesn’t really suit the car.

Inside, Tekna models have a choice of perforated leather colours; either standard black or optional cream.

A familiar range of Nissan trim grades awaits buyers, starting with Visia and stepping up to Acenta. Both ride on the smaller, 17in wheels and miss out on the best infotainment system, but at least Acenta has front and rear parking sensors, automatic windscreen wipers and dual-zone air-con.

N-Connecta is the upper-mid-range grade of the four, bringing loads more technology and desirable extras like 19in alloys, the Smart Vision Pack and the Around View Monitor. It gets the full NissanConnect infotainment setup and sat-nav, making it the target for many buyers.

Crowning the X-Trail is Tekna trim. That’s where leather upholstery arrives with front seat heating and electrical adjustment, LED headlights and lots more. Tekna makes up a large proportion of the X-Trails sold in the UK.

The X-Trail isn’t as big as its boxy appearance would have you believe. It’s about the same size as a mid-size family car, being more than 200mm shorter than a Ford Mondeo and slightly narrower, too. It’s hard to imagine size causing the X-Trail or its driver any problems on the road other than visibility, with isn’t good out of the back.

On 17in wheels the 128bhp diesel officially records 57.6mpg, but in the real world it has to work so hard that it tends to average somewhere in the early 40s. It’s the same story with the weedy petrol, but an average of 35mpg would be a good result. The larger diesel gets closest to its official figures because it’s not so stressed, and owners can expect about 40mpg.

Insurance is reasonably priced for the X-Trail, particularly as a five-seater. It tends to be bought and owned by people with no interest in taking risks. Adding two extra seats does increase the likelihood of personal injury claims, though, so the seven-seater cars can be a little more expensive to cover with some insurers.

Nissan can’t claim to build cars that are as reliable as some other Japanese brands. The X-Trail doesn’t feature in the 2016 Driver Power survey, but the current Qashqai is stone-dead last for reliability by a not inconsiderable distance. Given that the Qashqai and X-Trail share parts, to a degree, it doesn’t bode well.

Since the best X-Trails are further up the trim ladder, the] Visia and Acenta (neither of which get sat-nav) seem superfluous. Visia is available with the lesser diesel or, for almost £2000 more, the petrol, which isn’t worth it. Oddly, in other trims the petrol is the cheaper of the two, making the difference between a Visia dCi 130 and an Acenta dCi 130 a whopping £3k.

Acenta has the full range of engines and can also be ordered as a CVT automatic with either of the two diesel engines, including both two- and four-wheel drive with the more powerful one.

N-Connecta matches the Acenta engine range, but doesn’t get started until almost £28k, and the seven-seat layout costs a further £1k, meaning that the Nissan X-Trail is rather more expensive than it first appears if you want one with sat-nav. It runs up to around £34k for an automatic, higher-powered, four-wheel drive diesel. These are competitive prices rather than bargains.

For the full luxury order, Tekna starts at just under £30k for the petrol and £31k for the cheapest diesel. Go all out and the X-Trail can set you back getting on for £36k, which is harder to justify.