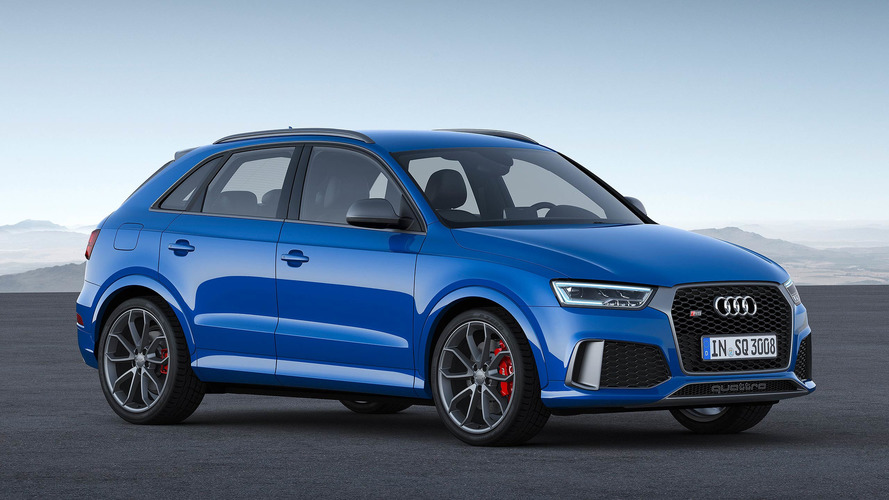 The Audi Q3 is a popular small SUV from the German premium brand, that goes head-to-head with the Range Rover Evoque in the battle for buyers’ hearts. It’s been around a few years now, and is showing its age in a few areas, but it remains a desirable upmarket SUV that can still make others think you’ve gone up in the world.

Did you know? The oh-so-Germanic Audi Q3 is actually built by Volkswagen Group brand partner Seat, at its factory in Barcelona.

Audi sells a lot of Q3 and, even six years after launch, it’s not hard to see why. It remains a stylish, upmarket machine packing plenty of the kudos from the larger Q5 and Q7: some still find it hard to tell one apart from the other. It’s been around a few years now and is starting to fall off the pace in some areas, but it remains competitive enough in others to still warrant a place on your consideration list. Choose engine and spec wisely, and you’ve a machine that will mature rather than age badly.

The Audi Q3 sports Audi’s ‘SUV’ appearance, just as its four-doors all follow a similar ‘saloon’ look. There’s a large single frame grille at the front, chunky wheelarches, a rounded rear and a wraparound tailgate carrying big horizontal light units. It’s easy to mistake the Q3 for the old-shape Q5 at first glance, which pleases buyers of the more affordable Q3 no end, and its mid-life facelift saw it get a sharper grille and headlights reminiscent of the new-shape Q7.

It’s a familiar-looking model by now, but one that still carries an air of status. It looks expensive, particularly on the move with Audi’s distinctive LED running lights glowing, and some bold colours work well with its crisply-creased panel sculptures. What it does lack is some of the clout a Range Rover Evoque still carries, but competing with that car is a formidable task for any small SUV. Importantly for Audi, the Q3 can still square up to the newer BMW X1. It still packs a punch.

The interior design of the Q3 shows its age more than the exterior. Even before you take in the dash design, it feels a bit unusual. The driver seems perched, pedals mounted a bit too close and at an odd angle, the steering wheel is also angled, all giving the feeling of tottering over the dashboard somewhat. You do get used to it but it’s not as laid back as the seating position in an X1 or Evoque. There is, however, ample space there for front-seat occupants, and the seats both have ample adjustment and four-way electric lumbar support even on the base Sport. All Q3s get sports seats too, which are supportive and comfortable.

The dashboard is, in the Audi style, impeccably well built. It’s starting to look a bit dated now though, with the contemporary details seen in newer Audis conspicuous by their absence here. Both the stereo head unit and climate control system have far too many buttons, for example, and the infotainment screen looks on the small side. Instruments are more A1 than Q5 as well.

In the rear, the Q3 still offers decent space. There’s not an abundance of room, but it bears scrutiny alongside a regular family hatchback, and will prove fine for two teenagers. Three people is more of a squeeze, though. Those in the rear have their own ventilation outlets and can charge devices through a rear cabin 12v power socket. Be careful of the panoramic glass roof, though: it can rob some headroom.

Stats show the boot is 420 litres with the seats up, which is OK but not significantly larger than cars such as an Audi A3. It is, however, an extremely well-planned space, with flat sides and square dimensions. There’s no load lip, so you can slide things in easily, and Audi helps further here by fitting a stainless steel strike panel across the boot sill, to facilitate hauling in heavy loads.

Fold the seats and the boot extends to 1325 litres. That’s a little up on a normal family hatch, as the Q3’s extra cabin height comes into its own here. All Q3 get split-fold rear seats and there’s a ski hatch hiding behind the rear seat armrest, should you be travelling four-up and need to jam in, say, a set of skis (or more likely something awkward from the DIY store).

All Audi Q3 have a 6.5in colour screen mounted atop the dash, into which is hooked an SD card-based sat nav system. It’s a bit of an aged system, coming only with 2D graphics, but Audi has upgraded it to take seven-digit postcodes and European mapping is preloaded. It has Bluetooth connectivity for mobile phones and the Audi Music Interface will allow you to control music on your Apple iPhone or iPod: Apple CarPlay is unavailable, though, and Audi sends its apologies to Android users, who are not so well served.

Infotainment is another area the Q3 is showing its age a little; even the supplementary 3.5in display between the dials looks previous generation; it will only mirror the most basic of sat nav instructions, for example. You can upgrade a little, but only to a slightly larger 7in sat nav system using faster-processing hard disc navigation. Mapping is, however, 3D, and can be controlled using the Audi MMI system (albeit from a dash controller rather than the more convenient console dial of other Audis).

Coming as part of the optional Technology Pack, hard disc sat nav also includes a subscription to Audi Connect, whose many features include allowing you to access Google and Twitter within the car. Once again, however, the data connection is 3G, rather than the modern and speedy 4G default - and there’s no wifi hotspot for occupants’ devices. We’d perhaps save the £1000 cost.

The Q3 doesn’t only look sleek and sophisticated, it drives with urbane prowess too. Stick with regular models on normal 17-inch wheels and the ride quality is impressive. It shows an SUV-like ability to deal with bigger craters and potholes, while also remaining controlled and comfortable at speed. Where things start to degenerate here is with S line models, which have 18-inch wheels: they also have no-cost-option S line Sport suspension, stiffened and lowered by 20mm. We’d think carefully about this: we’d also avoid entirely the Black Edition which has 19-inch wheels and standard S line Sport suspension.

Like most Audis, the Q3 has viceless handling. It’s grippy, doesn’t roll about or lose its cool, and is further enhanced on quattro models which use their traction-enhancing four-wheel drive to tailor the handling as well. The Q3 isn’t much fun to drive, though. A BMW X1 is sharper and crisper, so feels more sporting. Audi no longer sells the RS Q3, an unlikely performance car; unlike other Q3, this was surprisingly entertaining.

The Q3 has an impeccable range of engines. The entry-level 1.4 TFSI is a gem: it has cylinder on demand technology, so switches to two-cylinder mode during gentle running to save fuel, but you’d never know it. This 150hp motor is probably smoother than the 180hp 2.0-litre TFSI; if you don’t need quattro, we’d stick with the smaller engine.

Diesel choice is a 2.0-litre TDI in either 150hp or 184hp guise. The 150hp is front-wheel drive or quattro, the 184hp is quattro only: both offer a choice of six-speed manual or seven-speed S tronic. The diesel is as good here as in other Audis, and users should have no complaints about its power deliver, flexible nature and cruising refinement.

Back in 2011, the Q3 scored a five-star Euro NCAP safety score, with an excellent 84% for adult occupant protection and 85% for child protection. This test was a long time ago, and Euro NCAP has raised its standards since then. It’s unlikely, for example, the Q3 would score a five-star rating given its mediocre 52% rating for pedestrian protection, for example.

Safety assist features are also rather scant. It has ESP and secondary-collision brake assist, but doesn’t have any form of autonomous emergency braking, nor a driver monitor system or lane-keeping assist (this is, however, optional - if you’re prepared to fork out for the various necessary option packs). Audi also offers hill-hold assist and hill descent control as options; the former should really be standard and it would be nice if the latter were too, if only to pay token lip service to its off-road pretensions.

S line Edition has a more striking bodykit, complete with S line grille, different front and rear bumpers, rear diffuser and a smattering of S line badges. The wheels are bigger 18-inch rims and, as mentioned, you can lower it 20mm. LED headlights are standard, as is a power tailgate, and the seats are part-leather with S line logos embossed in. It packs plenty of showroom appeal the S Line Edition.

As more modern SUVs have grown, the Q3 is looking a little on the small side these days. It’s under 4.4 metres long and 1831mm wide which, with height of 1608mm, perhaps makes it seem a bit top-heavy. It is, however, more than two metres wide when you factor in door mirrors. Remember this if your garage is tight: you might want to trade up to S Line Edition trim, for standard electric-fold door mirrors.

Don’t default to diesel. The Q3 2.0 TDI 150 costs around £2000 more than the 1.4 TFSI 150, and officially averages 62.8mpg. The petrol engine, however, still returns 51.4mpg, and might offer additional gains in real-world driving thanks to its cylinder deactivation tech. CO2 is close, too: 117g/km for the diesel, 127g/km for the petrol. We’d think carefully.

Choosing S Line Edition means picking bigger wheels, which imposes a fuel economy penalty - a 1.4 TFSI S line averages 49.6mpg, almost 2mpg less. It drops further when you pick Black Edition, because its wheels are larger still. There is a knock-on effect on CO2 - for company drivers, it will raise the Benefit In Kind band by 1%, maybe even 2% on the fringes. How much does big-wheel style matter to you?

The Q3 is derived from the Volkswagen PQ35 platform, used by umpteen older models including older Golfs and the previous-generation Audi A3. It’s a well-proven setup that had any faults ironed out long ago, and the Barcelona Seat factory builds it to a very high standard - Germanic, dare we say. The Q3 is thus pretty reliable, particularly if you keep things simple with a Sport-trim TFSI variant.

The Q3 is looking excellent value for money these days, if you’re sensible. The entry-level 1.4 TFSI Sport costs just over £27,000, which is very competitive when compared to a Range Rover Evoque, particularly when you consider the standard spec includes sat nav and xenon headlights. The 2.0 TDI Sport is pricier, but still decent value at around £28,500.

It’s a bit of a jump up to S Line Edition trim, with the 1.4 TFSI costing just under £30,000. Add on a diesel engine, quattro driveline and amn S tronic gearbox, and prices quickly rocket: a Black Edition 2.0 TDI 184 quattro S tronic is a hefty £37,500. Such is the value Audi packs into the base Q3 Sport these days, and mindful it will be replaced sooner rather than later, we’d show restraint on the configurator.