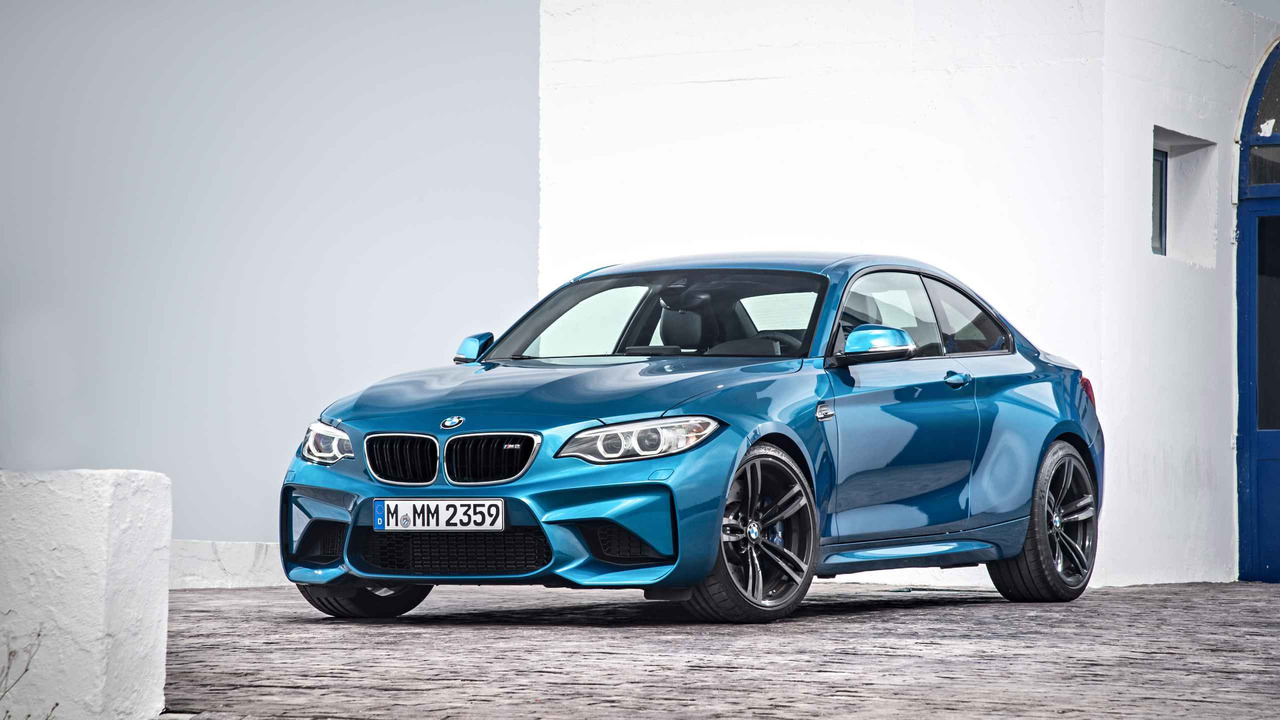 Could this be the new M icon?

The BMW M2 is both the ultimate iteration of the 2 Series Coupe lineage and, by extension, the flagship of BMW’s compact cars family – and also the entry point to full-on, BMW M ownership, coming from the same stable as the M3/M4, M5/M6, and X5 M/X6 M. In a phenomenally easy-to-understand line-up, the M2 is sold only as a rear-wheel-drive coupe in a single specification level, the only real drivetrain choice to make being whether you have a six-speed manual or seven-speed M dual-clutch automatic transmission (M DCT). Rivals are varied but, predictably, include plenty of German sports cars, such as the Audi TT RS and Porsche 718 Cayman S.

Did you know? The predecessor to this car was called the 1 Series M Coupe, to prevent any potential confusion with the BMW M1 supercar of the 1970s.

For years and years the BMW M3 has been the company’s everyday performance champion, the semi-affordable speed king coupe that can nevertheless be used on a regular basis with little hardship. It’s why it has proved so enduringly popular. But, now it has morphed into the M4, it feels too heavy and cumbersome to be the real icon of the range. Lucky, then, that BMW has the M2 to fall back upon – because this thing is absolutely majestic.

With its pugnacious stance and single twin-scroll turbo-toting engine, performance is blindingly quick and thoroughly enjoyable, without being terrifyingly unruly if the weather takes a turn for the worse. BMW’s promotional materials show the M2 alongside its predecessor, the 1 Series M Coupe, and one of the company’s iconic creations, the original M3 of the 1980s, clearly demonstrating in how high a regard the M2 should be held. It’s a breath-taking performance car and, as an added bonus, it’s more practical than many of its rivals to boot. There’s no doubt about it: the M2 is the best M car BMW makes right now and, moreover, it could be one of the very finest it has ever made.

The BMW 2 Series Coupe is not exactly a pretty, lithe two-door machine and, for some people, wide wheel arches, gaping air intakes, huge wheels (19 inches in diameter), and a rear end bristling with exhausts are all going to be visually too much. But we don’t think BMW’s stylists could have done the M2 any better than they have, even if they kept trying for the next 100 years. It’s fantastic to behold, the colossally distended rear bodywork being a particular highlight. And yet, there’s no carbon roof, nor massive roof spoiler, nor choice of gaudy paintjobs to make it OTT; it’s therefore different enough that you could never mistake it for a 220d M Sport or even the potent M240i, yet restrained enough aesthetically to allow it to be parked up in high-class locations. We adore it.

Again, this might seem a generous rating for a dashboard that lacks for anything in terms of a noteworthy design flourish, but this is a BMW – that means it’s of high quality within, it’s ergonomically on the button in terms of switchgear layout and so on, and it has iDrive, which remains the best automotive infotainment controller bar none, even in an age of touchscreen this, gesture control that, and voice recognition whatever. The M2 comes as standard with supportive sport front seats trimmed with Dakota black leather, with contrast blue stitching teaming up with an M three-spoke multifunction steering wheel and carbon fibre dash trim too. It also has grey-faced instrument cluster dials, which are redolent of some past masters from the BMW M catalogue. So it feels suitably sporty and special within, and we’ve not even got onto practicality yet...

For a car of this type, it’s far more usable than it has any right, or need, to be. It’s a genuine four-seater within, rather than a 2+2 masquerading as a four-seater. Accessing the rear seats isn’t too difficult, as the BMW has large doors and front seats that tilt smartly and quickly out of the way. The steering column and the front seats are fully adjustable, meaning a fabulous driving position is easily attained, but those chairs move manually as standard and they don’t feature lumbar support either; electric adjustment and the lumbar support are optional extras.

Still, as part of its standard-fit Interior Comfort Package, it has helpful features like extended storage and classy extended lighting, and there’s a 390-litre boot from the off – a far bigger cargo area than on many a competitor. Folding rear seats, called Through-Load, are an option, though.

Ah, now we come onto the really good stuff. If you’re into your BMW history, you’ll know some of the most exalted cars in the Bavarian company’s past are the taut, midsized coupes that offer 300-360hp, low weight, and pure rear-wheel-drive handling characteristics. The M2 deserves to take its rightful place alongside such greats, because it is blindingly good.

It works as a refined BMW, of course. You can cruise up and down motorways in it, where you should see a genuine 40-to-the-gallon if you play it reasonably safe with the throttle for most of the time, and you’ll be amazed at how its fixed-rate springs and dampers soak up the worst of road surface imperfections. It’s also quiet, free from drivetrain vibrations, and hugely torquey – 343lb ft as standard, 369lb ft on a time-limited overboost phase – meaning that, even if you avoid the M DCT gearbox, the M2 is flexible enough not to need constant downshifting when it’s snarled up in the surge-and-then-slow traffic characteristics of modern British motorways.

Yet you don’t buy an M car for mundane commuting purposes. And it’s on quieter, twisting roads where the BMW comes alive. The steering is wonderful, full of feel, rapid to respond to inputs, and beautifully, consistently weighted. Powerful M-specific brakes, denoted by the blue callipers, haul the car in time and again with no drama, thanks to perfect pedal progression and instant bite. The M DCT is a fine transmission and we wouldn’t blame you for picking it, but really, try and stick with the six-speed manual – fewer and fewer drivers’ cars these days offer a ‘stick-shift’, and it’s a typically brilliant BMW gearbox with a pleasing, short throw.

All this, plus one of the all-time great six-cylinder motors to have come out of Munich (you will very quickly forget this 370hp unit uses forced induction) means the M2 is almighty quick in all conditions. You can stoke it along at half-pace and it will feel rapid. Go to seven- or eight-tenths and it just offers clean, composed speed across all manner of ground, accompanied by all the right sensations clearly informing you it’s the rear axle doing the driving. Get it on track and it will oversteer at will all day, with smoke pluming off its tyres in a wanton display of hooliganism. It should satisfy all drivers. It will definitely put a smile on your face when you’re behind the wheel. It is glittering, and brilliant, and intoxicating, all in equal measure. It makes an M4 looks ponderous and daft, too.

There's no official Euro NCAP rating for the M2, but it shares a lot with the 1 Series, which picked up the full five stars, so the M2 is a safe product. Multiple airbags, ISOFIX fittings, and electronic traction and stability systems are fitted as standard, as are rear parking sensors, auto lights and wipers, and a headlight wash function. Optional extras for very reasonable costs include Driving Assistant Package (City Collision Mitigation, Forward Collision Warning, Lane Departure Warning, and Preventive Pedestrian Protection), a reversing camera, speed-limit information display, and Adaptive Headlights with High-Beam Assistant.

There are only four colours for the BMW M2, and three of them are monochrome. None of them cost any additional money, so it doesn’t matter whether you go for the one solid, non-metallic paint – Alpine White – or the three metal-flake finishes of Black Sapphire, Long Beach Blue, or Mineral Grey. Much of the early promotional imagery showed the car in the blue, which is a signature look, but we can highly recommend the Mineral Grey as a stealthy, classy alternative.

There is only one; simply pick whether you want it with a manual gearbox or the seven-speed M DCT twin-clutch auto. All cars come with, on top of what has already been mentioned, dual-zone climate control, Xenon headlights, cruise control with a brake function, High-Gloss Shadowline exterior trim, and Anthracite headlining.

Compact overall, the M2 is narrower across the beam than its flared arches might have you think – it measures 1,854mm wide without door mirrors.

We’re using the same refrain here, but for a car like this, 33.2mpg quoted and 199g/km CO2 for the manual are not bad figures at all. Step up to the M DCT and the stats improve to 35.8mpg and 185g/km, although insurance in group 42 and Benefit-in-Kind of 34-36 per cent are both high. Also, the M2 was originally slated to have a limited production run, but it has been so successful for sales that BMW isn’t restricting its numbers; so while residuals should nevertheless be strong, as an investment piece the M2 might not make as much sense in the short- to mid-term as some other rivals or rarer M products.

BMW has a good reputation for reliability and the M2 is built with top-spec equipment and running gear, so it should be a reliable car. BMW offers a three-year, unlimited-mileage warranty that is extendable for annual periods for fixed fees, while the car’s on-board service indicator tells you when it requires maintenance. Service Inclusive packages bundle up three years or 36,000 miles’ worth of workshop costs for a one-off fee of around a grand; useful on a high-performance motor like this.

We would have given the car full marks here, for much the same reasons we’ve been outlining above – for this sort of genuinely brilliant, all-round performance, the M2 is an absolute bargain at £45,000. Furthermore, you could quite easily go into a BMW dealership and tick the box for a manual model, with no further cost options, and end up with a car that’s still well-specified for the cash. So why the mark off? The main problem comes in the form of the M240i – it’s only 30hp down for power, a few tenths behind for 0-62mph, has exactly the same torque as the M2… and it’s as near as dammit £10,000 cheaper.