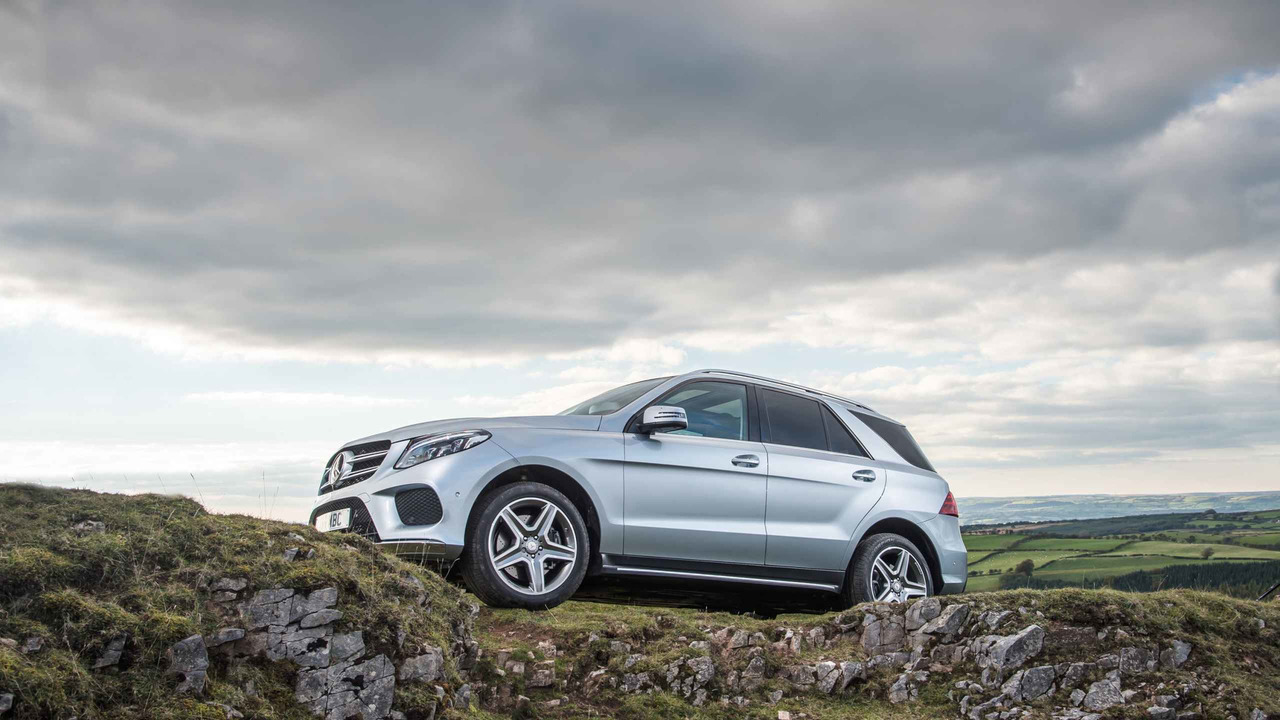 Impressively classy, but lagging behind the competition on some key fronts

The Mercedes GLE is one of the German company’s most luxurious products; a large five-seat SUV that comes with an array of powerful drivetrain options – these include petrol and diesel power, and also a plug-in hybrid electric vehicle (PHEV). All GLEs have automatic transmissions and 4Matic all-wheel drive is standard across the board. Most GLEs will be used exclusively on tarmac, but there is an Off-Road Package for the diesels that gives the Mercedes genuine mud-plugging ability. The GLE competes in a tough class full of impressive cars, like the Audi Q7, Volvo XC90, and Land Rover Discovery.

Did you know? This is the artist formerly known as the ML, the new GLE nameplate coming into effect in 2015, during the midlife facelift.

The GLE is a middling option in the premium SUV class - desirable but ultimately not as good as some rivals, including the Audi Q7 and Volvo XC90, which both offer seven seats and better emissions. The GLE is a tech-laden, safety-conscious machine that focuses on comfort ahead of dynamic acuity, despite the presence of not one but two AMG models in the range. There’s plenty still to recommend about this SUV – but the inability to have seven seats, even as a cost option, could put some potential buyers off the big Merc.

The lineage back to the 1997 ML is nowhere more evident than in the GLE’s most distinguishing feature: the forward-raked C-pillar ahead of the boot. This will be a divisive characteristic for many, and while it’s all well and good paying tribute to your brand heritage, sometimes it’s worth striking out on a new design path – that C-pillar seems to date the GLE, which otherwise is an elegantly inoffensive vehicle. It’s not as sleek to behold as the smaller Mercedes GLC, but then it’s also not as gargantuan as the GLS. Like many Benzes, the GLE looks particularly good in AMG Line or even full-on AMG specification, with alloy wheels of 20- or 21 inches filling the arches convincingly.

Mercedes tidied up the cabin in the transition from ML to GLE in 2015, which saw a neater integration of the dashboard’s eight-inch colour display screen. The Benz off-roader might lack the swish TFT instrument clusters of rivals, but everything feels solidly constructed and hewn from quality materials. All models get at least Artico man-made leather – which is decent enough – with heated seats in the front, while the two most opulent models have Nappa leather with heated seats front and rear. Furthermore, there’s an acre of room for five people on board.

While the steering column manually moves for reach and rake, all GLEs have electrically adjustable seats with lumbar support. You can add a memory function with electric column as an option on the AMG Line and AMG 43 cars, but that feature is standard on the Designo Line and AMG 63 S variants. Stowage areas are plentiful and capacious on the GLE, while the doors swing wide to make access easy.

The boot is generous on the GLE, holding 690 litres with all seats in place and a colossal 2,010 litres with the 60:40 split rear backrests folded down – all models get the Easy-Pack powered tailgate and a wide boot aperture with a low loading lip. A shame, then, that the GLE 500 e PHEV has a bizarre, trapezoidal ‘mountain’ effect to its smaller 480- to 1,800-litre boot floor, caused by the battery pack lurking beneath. And, of course, you don't get the 40/20/40 split seats of plenty of rivals, nor the collapsible sixth and seventh seats in the boot. So while the GLE is a roomy SUV, it is far from the most practical in its class.

As one of Mercedes’ plusher models, the GLE gets certain items as standard equipment that would be optional extras elsewhere in the fleet, in order to make it feel worth the considerable outlay. The full Comand Online infotainment, with hard-disk drive-based 3D satnav mapping, is thrown in, while all cars also benefit from Bluetooth, DAB, Mercedes Me connectivity services, and smartphone integration with Apple CarPlay support, among more. The AMG 43 and AMG 63 models also feature a fantastic 830-watt, 14-speaker Harman Kardon surround sound system as standard. It's just a shame that this system - while fully specced as standard - is not the easiest to use, being almost too generous with control methods. In the end, the voice control is too hit-and-miss, and the touch-sensitive pad too fiddly, so you end up resorting to the conventional rotary dial. Even then, at times it's hard to figure out where some obvious menu settings are hidden.

There’s a particular emphasis on comfort in the GLE family, a fact that crystallises when you note that Airmatic air suspension is standard on all cars bar the Night Edition – and even then, the Dynamic Package adds it, along with 21-inch AMG alloys, for less than two grand. The Active Curve System, which has anti-roll bars that lean the GLE into bends to prevent wallow and lurch during cornering, is an option on all cars bar the AMG 63 S, where it’s standard fit.

The GLE isn’t particularly bad in the handling stakes, but it won’t ever match up to the likes of the Range Rover Sport, Porsche Cayenne, or even the ageing BMW X5 for driver thrills. The steering is too remote and the chassis too inert for it to ever really entertain. Even the thunderous AMG 63 S can’t overcome the elderly underpinnings of the GLE, instead resorting to offering more in terms of straight-line pace and acoustic drama.

Still, the comfort levels are very good, as is the GLE’s general refinement. And the drivetrains suit it to a tee. The only slight disappointment is the four-cylinder, twin-turbo 2.1 diesel in the 250 d. It’s powerful enough, with 204hp and 369lb ft, to move 2,165kg of Mercedes SUV from 0-62mph in 8.6 seconds and on to a top speed of 130mph, but this engine is being superseded by a quieter, smoother 2.0-litre diesel elsewhere in the Mercedes line-up, and it shows its age.

All models are four-wheel drive, while the diesels and the AMG 43 send their power to all corners via a super-slick nine-speed auto. The 500 e has the old '7G-Tronic' seven-speed auto, while the 63 S has its own AMG Speedshift Multi-Clutch Technology 7G-Tronic unit.

The Off-Road Package for the diesels brings in a number of useful items (including, but not limited to, a 100 percent locking centre differential, underbody protection, Airmatic suspension, an additional ‘Off-Road+’ mode in the Dynamic Select system, and a low-range gearbox) that really do make the Mercedes incredibly capable over rough terrain. This option also improves the GLE’s 500mm wading depth to up to 600mm.

The GLE is a good tow car. Go for the 350 d that we'd recommend, anyway, and you can pull up to 3500kg - the same as a Land Rover Discovery will manage.

The Mercedes GLE has a five-star Euro NCAP rating, garnered in 2012 as an ML, and it’s easy to see why. All the items you’d expect to be standard equipment are there, such as Active Brake Assist, an Active Bonnet, Adaptive Brake with Hold function and Hill-Start Assist, six airbags, Attention Assist, twin ISOFIX mounting points in the rear, Pre-Safe anticipatory safety, and a tyre-pressure monitoring system.

But then it adds other impressive factory-fit items across the board, such as Crosswind Assist (which uses targeted braking to stop the car veering in heavy gusts of wind), Traffic Sign Assist, and Four-wheel Electronic Traction System (4ETS). All models also come with the LED Intelligent Light System for the headlights with Adaptive High-beam Assist Plus.

The only safety option is the Driving Assistance Plus Package, comprising Active Blind Spot Assist, Active Brake Assistant with cross-traffic function, Active Lane Keeping Assist, Distronic radar cruise control with Steering Pilot, and Pre-Safe Plus. The only disappointment is that the Merc doesn't get a driver's knee airbag.

The 250 d, 350 d and 500 e are only available in Night Edition trim, which includes a hefty kit list groaning under the weight of 20-inch alloy wheels, active LED headlights, heated leather sports seats, active park assist, and keyless entry and go. The only options you're likely to want are the panoramic glass sunroof and that adaptive air suspension. The AMG 43 and 63 S have their own comprehensive specification that includes the air suspensions and - on the 63 S - even the sunroof.

Despite the lack of seven seats, this is still a huge SUV. It measures 1,935mm at its widest, excluding the door mirrors.

Although the powerful V6 GLE 500 e looks to have deeply impressive numbers, as modern SUV PHEVs go it’s some way behind the BMW X5 xDrive40e or Volvo XC90 T8 Twin-Engine. Such performance is nice for driving, but not so beneficial for taxation purposes – in theory, the 500 e can do 76.4mpg with 74g/km, although in reality it’ll be a long way off either of these numbers; it also only has an EV range of 18.5 miles. Benefit-in-Kind (BIK) is rated at 17 percent, which is good for a luxury SUV, but fair to middling for a PHEV.

None of the other GLEs can return anything beyond 48mpg and the 63 S, with 23.9mpg, is particularly profligate. BIK for the rest of the range is essentially the highest 37 percent, except on the 250 d (33 percent), while insurance groups are between 41 and 50. An Audi Q7, BMW X5 or Volvo XC90 will be more efficient and are likely to hold their value better, too.

The engines used in the GLE are reliable enough and Mercedes has long since come out of its late 20th-century build quality slump. The three-year, unlimited-mileage warranty is offered and there are servicing plans with low monthly costs too. The 500 e has a separate six-year, 62,000-mile warranty on the battery pack, electric motor, and its power electronics.

As a large Mercedes SUV, affordable is not the first word you’d apply to the GLE. It’s pricier than the Volvo XC90 and Audi Q7 ranges, although it has a wider choice of engines than either of those rivals. The thing is, only three models (all diesels) are sub-£60k, while the Mercedes-AMG GLE 63 S is as near as makes no difference £100,000. Watch out for Designo Line trim – desirable it may be, in terms of the luxuries it affords, but it’s a serious price hike over an AMG Line model with the same engine; we’re talking in the order of £9,300.