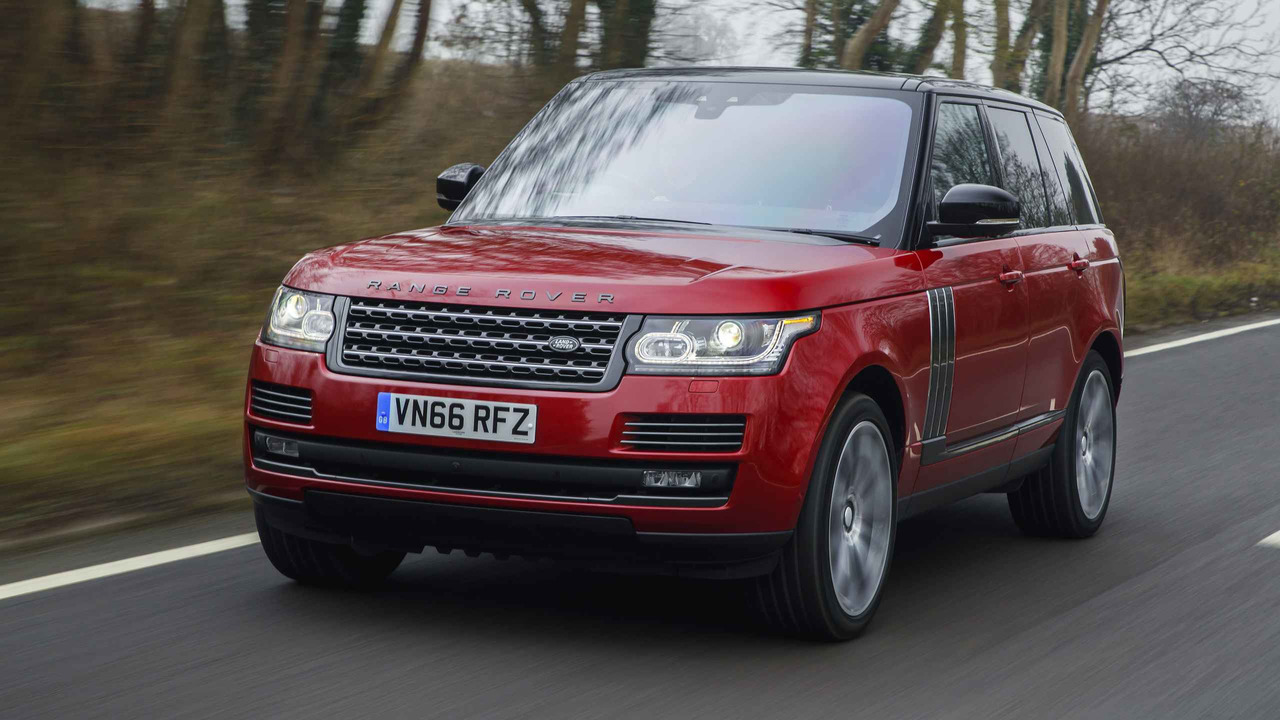 The one and only

Ever since the original was launched in 1970, the Range Rover has been evolving. First it was a comfortable Land Rover that could be cleaned and polished for Sunday best. Then it became a fashion icon, then a premium family wagon, and eventually a full-on luxury car. The current full-size Range Rover has to deal with internal competition from the likes of the Range Rover Sport, and super-luxury alternatives such as the Bentley Bentayga, but it still has the image, the styling, the luxury, and the astonishing off-road ability, to beat them all.

Did you know? Original Range Rover prototypes were disguised by badging them as ‘Velar’ – a name revived for a new Range Rover model in 2017.

If all the Range Rover had was its image and its name, it would still be hard to beat. It’s difficult to conceive of a more broadly desirable car, a car that can cross mountains and ford rivers just as capably as the ancient Defender to which it is distantly related, yet has the kind of refinement, comfort and quality to place it alongside luxury cars such as the Mercedes S-Class. It’s big, heavy, thirsty, and certainly not cheap, but it is also a true icon of modern motoring.

By all rights, the appeal of the Range Rover should be wearing off by now. After all, we are getting on for half-a-century since the original was launched, and the world has changed into one where we are worried for our environment and concerned over air pollution. Yet it is all but impossible to see a Range Rover passing by and not feel pangs of desire. Gerry McGovern’s redesign perhaps lacks the simple handsomeness of Geoff Upex’s 2002 predecessor, but it’s still a deeply handsome. appealing car by any standards. If we have one problem with it, it’s that the gills on the side of the front wings are simply there for decoration, not for function, which should surely be anathema to any vehicle wearing the Land Rover badge.

As for the brand image, it’s all but unbeatable. We profess, as a society, to detest the ‘Chelsea Tractor’, but given the money and the opportunity, more and more of us are buying one, a trend that has vastly inflated Range Rover sales in the past few years.

As with almost any current Land Rover product, the interior has the capacity to disappoint. It really does look a bit under-designed inside at times, and even with the big touchscreen and the all-digital instruments, there is a sense that rivals offer more visual delight for your money, especially the (admittedly much more expensive) Bentley Bentayga. That said, break out the cheque book and have a deep dive into the options list, and there are leather, wood, and aluminium options that can lift the design somewhat. At least there is never any doubt over comfort and refinement. There are only a precious few cars that have superior seats, or better suppression of unwanted noises, than a Range Rover.

Land Rover quotes a massive 909 litres for the boot volume of a Range Rover, and 2,030 litres (2,345 litres for the long wheelbase model) if you fold the back seats flat. Even in standard-wheelbase form, there is stretching room for tall passengers in the back seat, although the Range Rover does lose out to some rivals, and indeed the Range Rover Sport, by not offering a seven-seat option. Of course, you can choose to have fewer seats by going for the optional Executive rear seat package, which reduces the rear bench to a two-seater, with a huge console between for storage, infotainment, and more. That’s best experienced in long wheelbase form (which has an extra 186mm of rear legroom), but while it’s certainly luxurious, it’s hard to count it as practical.

The classic split-tailgate is retained, and now it’s power-operated and can be opened by waggling your foot under the rear bumper. The lower half of the tailgate is also a seat, and makes for just about the most prestigious picnic perch you can find. The air suspension also means that you can raise or lower the car to make it easier to get in and out, or to load bulky items into the boot. Really though, the practicality of a standard five-seat Range Rover is limited mostly by how mucky you’re prepared to allow it to become. Never forget that the 1970 original was designed to carry a sheep in the boot…

The Range Rover comes packed with tech, as befits the flagship of the whole Land Rover family. All models come with a 12-inch TFT digital instrument screen, and you can have a head-up display with that. The InControl Touch Pro system, which uses the newer ten-inch touchscreen, includes a 380-watt Meridian sound system, Wi-Fi hotspot, route-planning that allows you to send instructions to the satnav from your home devices, DAB radio and digital TV, dual-view screen that allows the driver and passenger to view two different things at once, voice recognition, vehicle access and engine start via a smartphone app, vehicle tracker, a satnav system that can advise you if you need to use public transport, live parking and traffic information, a ‘commute mode’ that learns your regular routes and can offer re-routing advice around delays even when you don’t have a destination programmed in, and much more. We’ve come a long way from vinyl seats and hose-down interiors.

That the Range Rover is big, heavy, and doesn’t really like much to be rushed should probably be taken as given. If you want a large SUV with more involving handling, then Land Rover will happily sell you a more agile Range Rover Sport. It’s not that the big Range Rover doesn’t drive well (it does, after all, have the same Adaptive Dynamics and Dynamic Response systems that the Sport has, and they work to minimise body roll and maximise handling); it’s more that its priority is being effortless. That, it does very well indeed. Through a series of corners, the Range Rover will corner relatively flat for something this big, and with surprisingly responsive steering and a general lack of understeer. You always have the sense, though, that it would much rather be on a main road or a motorway, happily covering big miles as you sit back and let the car take the strain. That’s the Range Rover’s raison d'être.

The ride quality is mostly excellent, although the Range Rover does suffer somewhat from the apparently universal issue for air suspension that allows small, sharp intrusions through, and that’s amplified on models with bigger wheels.

The only Range Rover to avoid is the SVAutobiography model, which has been stiffened and lowered to make it more agile, but that ruins the ride, which is sort of missing the point as to what a Range Rover is supposed to be.

Thanks to mostly being made of aluminium, the Range Rover’s kerb weight is relatively trim, so the standard 258hp SDV6 turbodiesel engine is really all you need – it’ll do 0-62mph in 7.4 seconds. You could upgrade to the super-smooth 339hp V8 4.4-litre diesel, but the V6 does the job just as well, in reality. The V6 diesel hybrid has fallen behind the curve a bit, compared to cars such as the Audi Q7 e-tron plugin hybrid, so there’s not much point. Petrol engines are strictly for those with a seat on the OPEC board, but the 510hp supercharged V8 model will crack the 0-62mph run in a mere 5.1 seconds, and the 550hp SVAutobiography isn’t actually any quicker, further undermining its case. The 3.0-litre supercharged V6 is rather caught in the middle, but it’s very smooth and has reasonable performance if you don’t like diesel, but don’t fancy a V8.

The Range Rover was tested in 2012 by Euro NCAP and received a five-star safety rating, with a 91 percent adult occupant score, 84 percent for child occupant, 63 percent for pedestrian protection, and 86 percent for safety assist.

It almost goes without saying that if you buy your Range Rover with a bottomless cheque book, there is almost no limit to what can be done in terms of specs, and Land Rover has its Special Vehicle Operations team on hand for requests that can’t be taken care of on the standard production line. The sky and your bank balance really are the limit here.

The Range Rover is massive, and even more so if you go for the long wheelbase model. Only those with broad, (preferably gravel) driveways and reserved parking spaces need apply.

The 3.0-litre SDV6 engine makes the most of the 300-odd-kg drop in weight compared to the old Range Rover, and can return 40.4mpg officially (the first full-size Range Rover to break the 40mpg barrier) and emits 182g/km of CO2. The Hybrid manages 45.6mpg and a creditable 164g/km, but it’s very much more expensive than the standard diesel.

The 4.4-litre V8 diesel returns 33.6mpg and 219g/km, figures that would have seemed close to miraculous not so long ago.

Then we get to the petrol models. The 3.0-litre supercharged V6 manages an only slightly disgraceful 26.4mpg and 248g/km, but the 510hp V8 petrol slurps petrol at a gallon every 22.1 miles, and emits 299g/km. The 550hp version’s figures are exactly the same.

The Range Rover has been recalled for faulty lights, fire risk, brake issues, detaching wheel nuts, seatbelts, unsecured doors, engines cutting out, and airbag problems. Land Rover has a traditionally poor image when it comes to reliability, but it has been making significant improvements of late. All Range Rovers come with a three-year, unlimited mileage warranty, which can be extended to ten years and 100,000 miles as an option.

If you consider the Bentley Bentayga as a rival, then the Range Rover is an absolute bargain. If not, then it’s hugely expensive. A basic 3.0 SDV6 Vogue can be had for just over £76,000, but if you want some ritzier options, the price starts to climb precipitously. The cheapest 4.4 V8 diesel is just over £83,000, while the most affordable hybrid model (in Vogue SE trim) is £94,000-odd. You can get a supercharged V6 petrol Vogue SE for around £83,000 though.