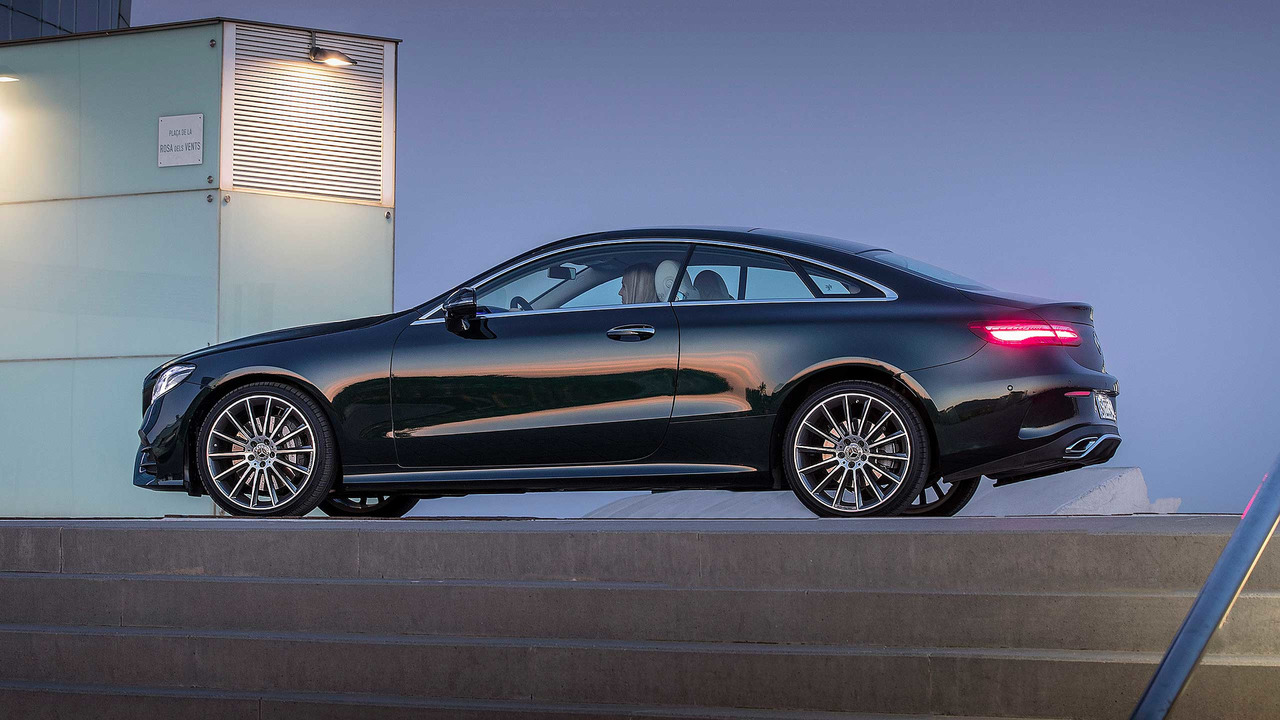 A unique coupe with unique appeal.

The new Mercedes-Benz E-Class variants are arriving apace, with the E-Class Coupe the fourth different style to launch since the saloon appeared at the start of 2016. The ‘coupe’ description is being added to all manner of different cars these days, with the SUV/coupe stretching the definition from its two-door origins.

However, this latest version is a coupe in the true sense of the word, with two doors, a driver-focused interior and a pair of rear seats for those occasional moments when you can’t avoid taking a couple of extra passengers. It’s not overrun with rivals, but the usual premium manufacturers are all there with alternatives should you wish – the Audi A5 or A7 and BMW 4 Series and 6 Series are all models you might want to consider, although none quite hit the same price/size bracket as the new E-Class Coupe.

But does it stand apart from its rivals, or fall into an unnecessary niche…? We headed to Spain in order to find out.

Far be it for us to tell you that you must find the E-Class Coupe attractive, but Mercedes has certainly put a lot of thought and effort into taking a lot of the good bits from the saloon/estate version, but adding some sleek and smooth lines that help the coupe stand out as a clearly defined model on its own terms.

Several of the styling touches are shared with the coupes that sit either side of the E-Class in the range – the C-Class and S-Class. The most notable elements come at the rear, where the slim tail lights and small, integrated spoiler lip on the boot provide a visual marker that this is not the sensible saloon version.

The side profile is made distinct, too, by the lack of pillars between the front door and the rear window, which gives a vast and uninhibited expanse of glass over the side of the car.

Inside, there is a real sense of familiarity if you have been in Mercedes’ other recent models, but with a few bespoke touches that mark this car apart – the turbine-shaped air vents being the most notable. This sense of familiarity is a fantastic thing when you consider that the E-Class is sharing elements with the sumptuous S-Class. As you’d expect, there is a whole host of different options when it comes to trims and cabin colours. There are two new wood options offered for this car, but if aluminium, brushed metal or soft-touch leather are your thing then you won’t be disappointed either.

The level of technology you can have on board is stunning, too, although unsurprisingly the huge, widescreen infotainment and dashboard screens are a cost option. The standard 8.4inch screen is by no means basic, though, and every car comes with a head-up display that projects information about speed, navigation and even the self-driving systems into your line of sight.

Because the new E-Class Coupe now sits on the latest Mercedes underpinnings, it is significantly larger than the car that preceded it, having grown by up to 143mm in length, and 74mm in width. This translates to a notable increase in space in the cabin, particularly in the rear. Getting into the back seats of a two-door car will always require a certain degree of flexibility, but once you are in you enjoy a fantastic amount of space, even for adults.

There is a really generous amount of legroom – as much as 74mm more than the last E-Class Coupe – and a decent amount of headroom, despite the swooping lines of the car’s styling. The lack of pillar between front and rear windows helps eradicate any lingering possibilities of claustrophobia, and the optional Warmth Comfort package even offers heated rear seats to maintain the feeling of luxury that is so obvious in the front part of the cabin.

The engine range in the E-Class Coupe is relatively simple with just one diesel (the E 220d) and two petrols (the E 300 and E 400) on offer for now, although another diesel will be added to the list by the end of 2017. The E 220d is the one that Mercedes reckons will prove most popular in the UK, with about 60-70% of buyers expected to stay faithful to diesel.

It’s an engine that suits the cruising nature of the E-Class Coupe well – it is not blisteringly quick (0-62mph takes 7.4 seconds) but it never feels like it struggles to overtake. Any slight grumbling from the engine when you go for a quick pass is gone when you settle down to a cruise. The nine-speed automatic gearbox maintains the serene atmosphere, as it is particularly quick to shift between its many ratios, and is smooth while doing so.

The E300 petrol is the closest in price to the diesel, but is marginally less serene on the road, as it needs a little bit more urgency to get up to speed, so is slightly noisier under acceleration. The sports exhaust is one reason for that, making an appealing noise in many ways, but it does intrude on the peaceful nature of the cabin in a way that doesn’t really fit the nature of the car.

As well as picking your engine, you can also choose between two different suspension options, with a steel- or an air-based option offered, both adjustable. The choice is made easier by the fact that both do a fantastic job of soaking up bumps when in the most comfortable mode, despite the fact that the coupe sites 15mm lower than the saloon.

As expected, the E-Class Coupe comes with the very latest self-driving technology, and this pushes the boundaries that bit further than every other Mercedes before it.

A £1695 Driving Assistance package is one of several optional packs offered, and allows the car to use radar to track the vehicle in front and ‘locks’ onto it, maintaining a safe distance, and is capable of doing so at speeds of up to 130mph. It is also able to offer steering assistance at speeds of up to 80mph and can increase or decrease the car’s speed in response to signs, even temporary ones on motorway gantries.

As the law still requires the driver to remain in control of the vehicle, a warning will pop up in the head-up display if you let go of the wheel, but it is clear from the way in which the coupe is capable of sticking in its lane, keeping a safe speed and reacting to speed limit changes, that this is a car that is more than ready if and when legislation changes.

With all this self-driving ability, the larger dimensions and the smooth ride, it’s clear that the E-Class Coupe is a car that is very much aimed at the sort of driver that wants to cover long distances comfortably and stylishly, rather than the one that wants to get thrills from flying around tight corners.

It’s hard to find objective fault with the E-Class Coupe. It has a stunning interior, plenty of space for four adults, and enough room in the boot for a decent amount of luggage for long-distance touring trips. It might not be an emotive experience, but it really comes into its own on high speed, long-distance drives. Compared with similarly sized rivals such as the Audi A7 and BMW 6 Series, it is competitively priced, but doesn’t lack in either quality or space.