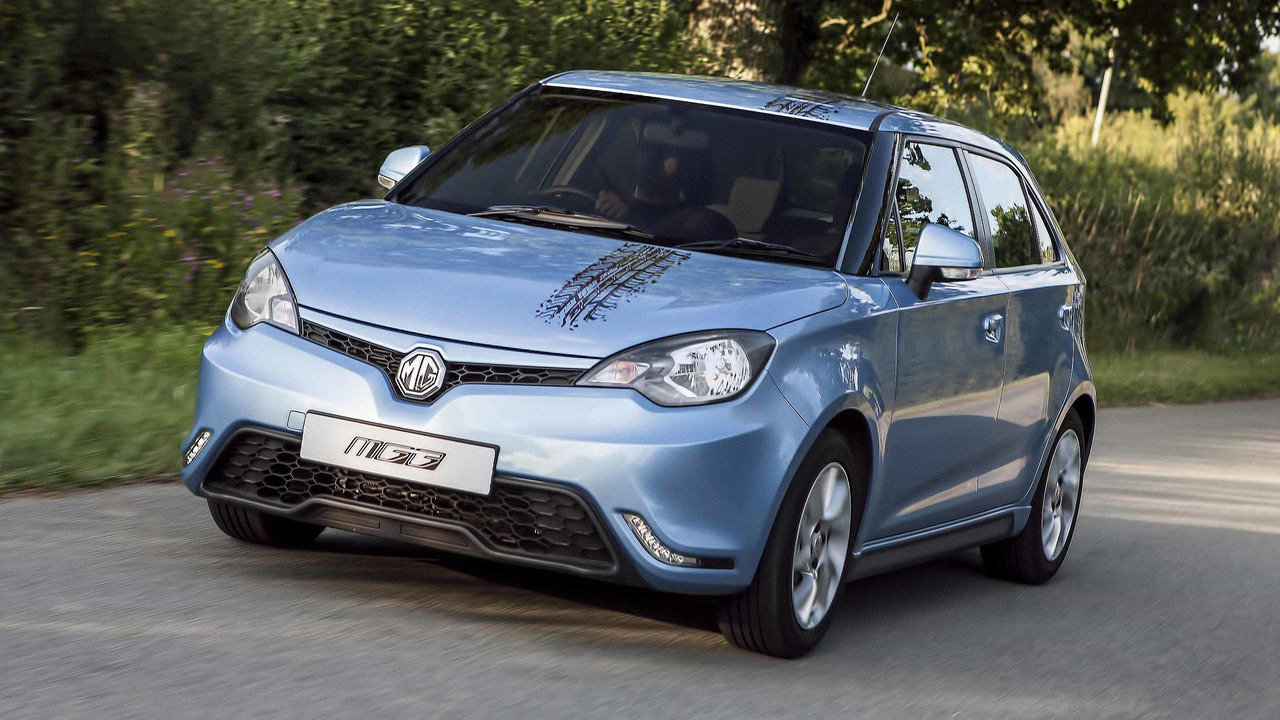 The rebirth of the MG brand.

The MG 3 is a modern-looking and stylish supermini designed and built since Rover’s Chinese takeover. It has also been by far its best-selling car since the company’s rebirth as MG Motor around a decade ago, helped along by personalisable graphics and colour options. The MG 3 is an old-fashioned supermini under the skin, with a noisy 1.5-litre petrol engine and a simple but entertaining chassis. Materials quality can’t match its rivals, but it’s much cheaper than most to make up for it.

Did you know? The first MG 3 was actually just a rebadged Rover Streetwise, sold only in the Chinese market.

As a cost-effective, fun-to-drive and well-equipped small car, the MG 3 does a sterling job, and its many clouds come with silver linings. For example, it lacks any form of sat-nav integration but cuts that corner with options for brackets to hold your smartphone.

The engine and chassis may be from a bygone period, but refinements have brought them up to an acceptable standard. In fact, the 3 is more fun to drive up a country road than many of its more expensive rivals. Materials and general build quality are comparatively suspect, of course, but it’s a very well specified car for the money.

The MG 3 is a good looking small car. The silhouette is bang-on, being a bit cheeky and toyish but sporty and poised. The front is a little bland around the upper grille, but the slightly flared skirts at the side of the lower grille give it poise and stance, making the front look hunkered to the ground and ready for the drive ahead. It’s the kid from out of town who nobody really knows anything about but appears on the scene sporting a well-worn but perfectly-fitted leather jacket and ripped jeans.

There are plenty of customisation options, too, with graphics that are in some cases confined to the roof, and in other cases that run down the bonnet, A-pillars and more. It’s part of MG’s drive to take on the MINI hatchback at its own game. MG won’t win, of course, but it’s got to do something.

Chinese ideas of interior quality aren’t the match for European ones yet, and it shows in the hard plastics and crude finishes that feel at least a generation out of touch. The storage bay lid on the dashboard feels flimsy and fragile, but it’s also the point at which one of MG’s special brackets can be connected up to hold a smartphone. The attachment point has a USB port and a 3.5mm socket to give you options, but most people will surely use the USB port to let their device charge.

Red contrast stitching on the cloth seats is an impressive little detail. Few other car makers even offer it as an option, let alone make it standard at such an affordable price point. The steering wheel is leather on all models and there’s a useful breadth of adjustment in the front seats, including for under-thigh support.

The seat backs aren’t especially supportive, but they’re good enough for most short and medium journeys. There’s a little side bolstering for cornering support and the cloth is in itself quite pleasant to look at. The control dials on the centre console are thin, cheap plastic, which is largely to be expected for the price.

Under the passenger seat is an increasingly rare sight: a pull-out drawer for keeping items well hidden. The bin at the top of the dashboard is useful for storage, too, except when a phone bracket is installed there. Elsewhere in the cabin, the front door pockets are a good size but access to them is restricted by the door trim armrests. The rear door pockets are smaller and even harder to get into if you’ve lost something small down at the bottom.

A 285-litre boot is competitive for the class but a long way behind the likes of the Skoda Fabia, which has 330 litres. It’s a simple affair with no hooks or nets. The 60:40 split rear seats don’t fold flat and nor do the bases of the backs meet flushly with the boot floor, but 1262 litres of seats-down space is impressive for a supermini.

Although the MG is missing the main component of most small cars these days, a touchscreen media interface, the much cheaper solution it substitutes in instead is actually quite effective. Add the appropriate bracket for your smartphone and mount it on top of the dashboard for instant, legal access to Google Maps navigation, Internet radio, streaming services and more, but try not to let it distract you.

Entry-level models don’t get much integrated technology, going only as far as a CD player with USB and AUX inputs, plus four electric windows, it doesn’t have air conditioning and you can’t actually install any of the smartphone brackets. One step up the range adds precious air-con, an extra two speakers to take the total to six, DAB radio, proper smartphone integration and remote central locking. On top of that there are electric mirrors and Bluetooth connectivity, compatible for media playback and hands-free calling.

The tech highlights come on the range-topping car in the shape of cruise control, rear parking sensors and automation for the headlights and windscreen wipers. And remember, even the range-topper is cheap...

Most superminis these days are moving to downsized, turbocharged engines but MG simply doesn’t have the development budget for that unless the engine comes from its parent company. Instead it uses a traditional, normally-aspirated 1.5-litre petrol that likes to be revved. It’s a decent enough engine once it gets past 3000rpm, with a useful amount of power at the top of the rev range. It just draws a blank at low revs, which can be frustrating.

A 10.4-second 0-60mph sprint, not directly comparable with the 0-62mph times that most manufacturers quote, is very competitive for the class and means the car feels peppy and responsive when the revs are up. What it lacks is the turbocharged torque of engines like the Ford Fiesta’s 1.0 EcoBoost or the Vauxhall Corsa’s 1.0i Turbo, which both deliver better in-gear acceleration. It also lacks the refinement expected in modern cars, particularly when you rev it in the manner it needs to be.

MG has found an unexpectedly good formula for the chassis, though, and even with a slightly over-firm ride quality the excellent body control and direct, relatively feelsome steering give you a much greater sense of involvement along winding roads than a lot of superminis can manage.

Interestingly, the little MG has an automatic brake ‘wiping’ feature when the windscreen wipers are activated that now and again lightly brushes the brake pads on the discs to clear excess water. Some cars costing five or six times the price have a similar thing. It should eliminate the chances of the brakes under-performing in wet weather.

It has the required tyre pressure monitoring system, six airbags and stability control. The latter incorporates brake-force distribution and Emergency Brake Assist, which together help ensure safer, faster stops in all weathers.

Hill-Hold Control is standard and there are two ISOFIX child seat mounting points in the rear. Parents of babies should be aware that on the basic 3Time model there’s no facility to turn the passenger side airbag off, so it’s not appropriate for carrying rear-facing car seats.

There are no active safety features of any kind, though. Euro NCAP also gave the 3 a disappointing three-star rating when it tested the 2014 model. While some of the specs are impressive, overall safety is thus more mediocre.

There are seven funkily-named single-tone colour options and three extra two-tone choices. The free ones are Whiter Than White, Newton Black and Hello Yellow, and for £495 there is Ruby Red, blue-grey Smokey Blues, Silver Fox and Orange Marmalade. The two-tone cars come with a black roof and either Ruby Red or Hello Yellow, and a white roof is yours only with Ruby Red. The two-tone paints are, interestingly, the same price as the single-colour upgrades.

There are four trim levels, although the two in the middle closely overlap. The range starts with 3Time, which is best avoided for its lack of key features like DAB radio, air conditioning and remote central locking.

Upwards are 3Form and 3Form Sport, the latter of which is differentiated by 16in alloy wheels against the former’s 14in steels, and the Sport also wears trendier side sills that give a sportier look.

At the top, 3Style throws everything into the ring with cruise control, parking sensors and automatic headlights and wipers among its unique equipment. It also gets special dual-finish alloy wheels.

MG has produced a compact car that won’t struggle at any point on UK roads. At just over four metres long it’s an easy fit for the average roadside space, and a narrow body makes light work of garages and driveways, leaving plenty of room to open the doors without endangering the car next door.

Although the car has no particularly advanced engine technology and is far from the lightest supermini you can buy, it manages well enough for fuel economy. An official fuel economy of 51.5 mpg is hard to achieve simply because the engine needs to be worked hard to make good progress. An average in the 40s is easily achievable with care, though.

Depreciation is on the MG3’s side, potentially saving thousands in running costs over a few years. Because it’s so cheap to begin with, it can’t lose all that much value and ends up being worth a similar amount after a typical three-year finance agreement as its rivals.

Insurance is another tick in the MG’s favour. All four models sit in insurance group 4E, which is fabulously low for the class and should mean affordable insurance, especially for young drivers.

In a car as simple as this there’s only so much that can go wrong, and only so expensive it can be. That’s good news for drivers who want something stylish on a budget, but MG’s quality control processes can’t be imagined as the equal of larger, more mainstream brands, so niggly faults are not unlikely.

Optional paints are priced at £495, including the two-tones. Roof graphics are £280, even when they extend down the A- or C-pillars or bonnet, but buyers beware that these are dealer-fit options and will attract an extra charge on top of the retail price when they are added. Alloy wheel upgrades can be as much as £760 but a number of finishes are available, while the ‘Lux’ synthetic leather upholstery pack is a very reasonable £500.