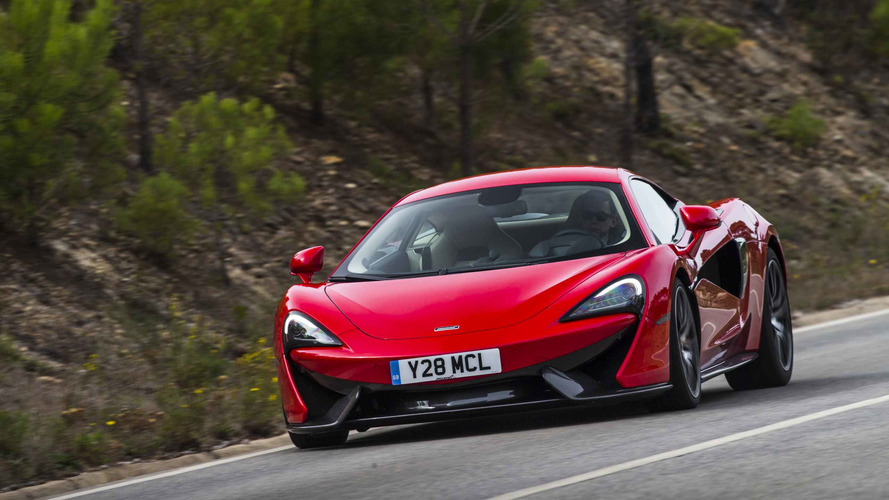 On the fringes of the supercar market.

The McLaren 570S is the Woking firm’s sports car choice, as part of its Sports Series, which sits below the Super Series. You could be excused for thinking the 570S is a supercar; after all, it’s mid-engined, carbon fibre constructed and has 570hp and a top speed in excess of 200mph. Such is the pace of development though we’ve reached the point where performance that might once have been considered 'super', or even 'hype'r, is now a few rungs down the ladder. That’s incredible, and brilliant if you’re in the market for something to rival Porsche’s ubiquitous 911 Turbo S, Audi’s R8 V10 Plus, or Honda’s NSX, and while the McLaren, or its rivals, could never be described as cheap, if you consider that the performance on offer was once for a the rarefied elite, it actually looks like something of a bargain. The McLaren 570S is a very compelling option in the sports car sphere.

Did you know? Two seat choices exist for the 570S, Regular for slimmer-hipped owners, or Touring for those not unfamiliar with another kind of Big Mac.

A very McLaren interpretation of a sports car, the 570S introduced us to the company’s Sports Series. Slotting in under the 650S, it might be billed as an underling, but its specification doesn’t read suggest as much, and its performance is epic by any measure. There’s the same carbon fibre monocoque structure of the Sports Series models (and P1), a ‘down tuned’, but still 570hp version of the company's twin-turbocharged 3.8-litre V8, mated to McLaren’s seven-speed dual-clutch automatic transmission. What is missing is some of the Super Series models more trick elements, so the suspension is conventional here - though with adaptive damping - and there are no active aerodynamics. You’ll not miss them; indeed, the 570S is such a good car we’d struggle to recommend spending more on the model above it. An incredible car, that’s more than a measure for all its intended rivals, and capable of worrying a lot of supercars costing lots more above it.

The 570S is something of a McLaren greatest hits in its looks, which, given the infancy of the automotive division, is understandable, and, indeed, desirable. The rear is very P1 hypercar in its appearance, the LED rear lights following the shape of the black rear bodywork (or carbon fibre if you spend more). There’s a lot of contrast in its design, whether it’s the side sills, the front splitter, or the scallops that cut through those doors and into the rear wings. They feed cooling air into a mid-mounted engine. Visually, the 570S might look a bit more compact than the 650S, but the actual differences are slight, and more down to the 570S’s design. To some it’s a touch busy around the rear, over its engine, though McLaren will happily sell you the 570GT instead, which addresses that with a graceful hatchback and ‘luggage space’ over the engine. A technical looking car, clearly defined by its function to make use of the air that flows around, over and under it, the 570S looks pretty sensational, which only adds to its sizeable desirability.

Just getting in the 570S is pure theatre, the doors opening up and forwards, while the carbon fibre tub that they provide access to has been revised with lower and narrower sills to ease getting in. There are two seat options, either a Regular width one, or Touring for more generously proportioned owners. Those standard seats hold you tightly and, despite their obvious and necessary bolstering, are comfortable. The 570S’s cabin is unlike all its rivals' and there’s a clear functionality to it, which is neat rather than stark; McLaren is all about efficiency as it adds up to ease of use and greater performance.

The instruments ahead are clear, the TFT digital screen allowing conventional looking dials to be supplemented by a more track-focused display with a huge rev counter, borrowed from the P1 hypercar. It’s all very detailed inside, and where others might have justifiably resorted to parts bin borrowing, McLaren is resolute in doing things its own way - the bespoke indicator and light stalks feel and look very elegant indeed, for example. The view out is notable, as McLaren keeps the windscreen scuttle low to aid visibility, to good effect. It’s comfortable too, thanks to decent refinement and a ride quality that’s supple and forgiving for a car with such sporting focus. Naturally, that refinement can be altered, the engine upping in tempo in its more extreme driving modes, likewise the firmness of the suspension, but for all its incredible ability the 570S is a car you could conceivably use every day.

There are just two seats, but there are some concessions to practicality in comparison to McLaren’s other models. There’s some more oddment stowage around the cabin and behind the seats, while there’s a luggage compartment under the bonnet. It’ll take 150 litres, so think squashy overnight bags rather than wheeled suitcases and you’ll not go far wrong.

The crux of McLaren’s technology is centred on not what you can connect to it, but how it drives. That’s not entirely at the expense of connectivity, though, and McLaren covers all that with Bluetooth telephony, satnav, audio streaming, WIFI tethering, and DAB radio all accessed via McLaren’s own IRIS touch-screen mounted in portrait (as opposed to the more common landscape) format in the centre console.

There are supplementary buttons underneath that touchscreen to ease certain functions, but such is McLaren’s insistence on its way being the best, it’s not always that intuitive to use, needing a fair bit of patience to familiarise yourself with it. The standard audio system is impressive enough with a four-speaker system, but optionally there’s a rather impressive 1,280W 12-channel 12-speaker surround sound system developed in collaboration with Bowers & Wilkins, and it's likely most buyers will automatically tick the option box for it. If you’re track-bound in the 570S then it can be optioned with McLaren’s track telemetry system with GPS maps, while an additional option adds three cameras into the mix to record the front and rear views.

This car is fast, wickedly so; the 570S’s power comes from a revised version of McLaren’s 3.8-litre twin-turbo V8 engine. It might not be naturally aspirated, but its immediacy of response doesn’t betray its forced induction, and the 570hp it develops at 7,400rpm is backed with 443lb.ft of torque, which gives any-gear, any-rev flexibility. Wring it out and you can forget the sports car brief, as it’s pure supercar, reaching 62mph from rest in 3.2 seconds, though more telling is the fact it’ll reach double that in 9.5 seconds on its way to its eventual 204mph top speed. It’s actually quicker to 62mph than its iconic F1 relation’s 3.6-second time, while it’ll also beat its mighty granddaddy’s standing quarter mile. However you decipher it that’s little short of incredible, as this is not a crazy, limited run hypercar.

That ample performance is complemented by a chassis of extraordinary breadth and ability. You could forgive the 570S some compromises regarding ride comfort, but the suspension manages a rare mix of control and real composure, achieved without McLaren resorting to the hydraulic, linked and active anti-roll system of its Super Series cars - the 570S comes with conventional roll bars. There are adaptive dampers, which offer Normal, Sport, and Track modes, though default should be Normal, as Sport adds some unwanted busyness to the ride on anything short of glass-smooth tarmac. No more evident is McLaren’s dedication to the driving experience than the retention of a hydraulic steering system, where the norm today is an electrically powered system for the economy gains; McLaren is unconvinced that the feel such systems deliver is suitable for a sports car.

It’s right, and the 570S’s steering defines it; the way the 570S’s nose reacts to inputs at the beautifully weighted steering wheel is never anything less than faithful, predictable and quick, it positive and rich in feel without being busy or intrusive. That turn in is aided by brake steer, which gently adds braking force on the inside wheels to help the car turn into a corner. It’s backed up by a chassis that delivers lots grip and readable limits so the shift from grip to slip is benign enough to allow you to exploit it, while the ESC stability and traction systems are tuned to allow you to do so with the reassurance that it’s there to help you out if needed, but otherwise leave you to it. As a car that connects, it’s right up there among the very best.

Driver, passenger front, and side airbags, a sophisticated stability and traction control system, sensational brakes, and that super strong carbon fibre tub around you all combine to make this a safe sports car. There’s none of the anticipatory collision detection or driver fatigue monitoring equipment of some cars, but that’s rare in the sports and supercar classes.

White, blue or silver are listed as Standard colours on the McLaren configurator (don’t look for it, as you’ll lose hours), with 16 further colours that McLaren lists as either Special or Elite. That’s only half the story, as there’s near limitless opportunity for exterior trim packs, a contrasting roof colour, and MSO (McLaren Special Operations) can go even further and paint it any colour you like, and make bespoke changes inside, too.

There’s one standard specification, to which you can add any number of options for personalisation. We’d go with some carbon on the outside and the Track Pack, which not only adds a slightly raised rear spoiler, but brings the lightest specification to allow the 570S its maximum performance. We’d be tempted to pick the nose lift option, too, to keep that expensive front splitter from scraping driveways or sleeping policemen.

Given it has performance that was once the preserve of its F1 relation, the running costs are irrelevant. Sure, it’s not going to be a cheap ownership proposition, but neither are any of its rivals. Official fuel economy is 26.4mpg, though the reality is more likely to be high teens if you’re sensible, and a lot less if you’re not. You’ll be having too much fun to care…

The list price might only be a starting point, but even with an expensive excursion into the options list the McLaren 570S looks like reasonable value against not just its direct rivals, but cars costing much more. It’s good enough that, until the 720S comes (replacing the 650S), it’s all the McLaren ‘sports car’ you could ever want, or need.