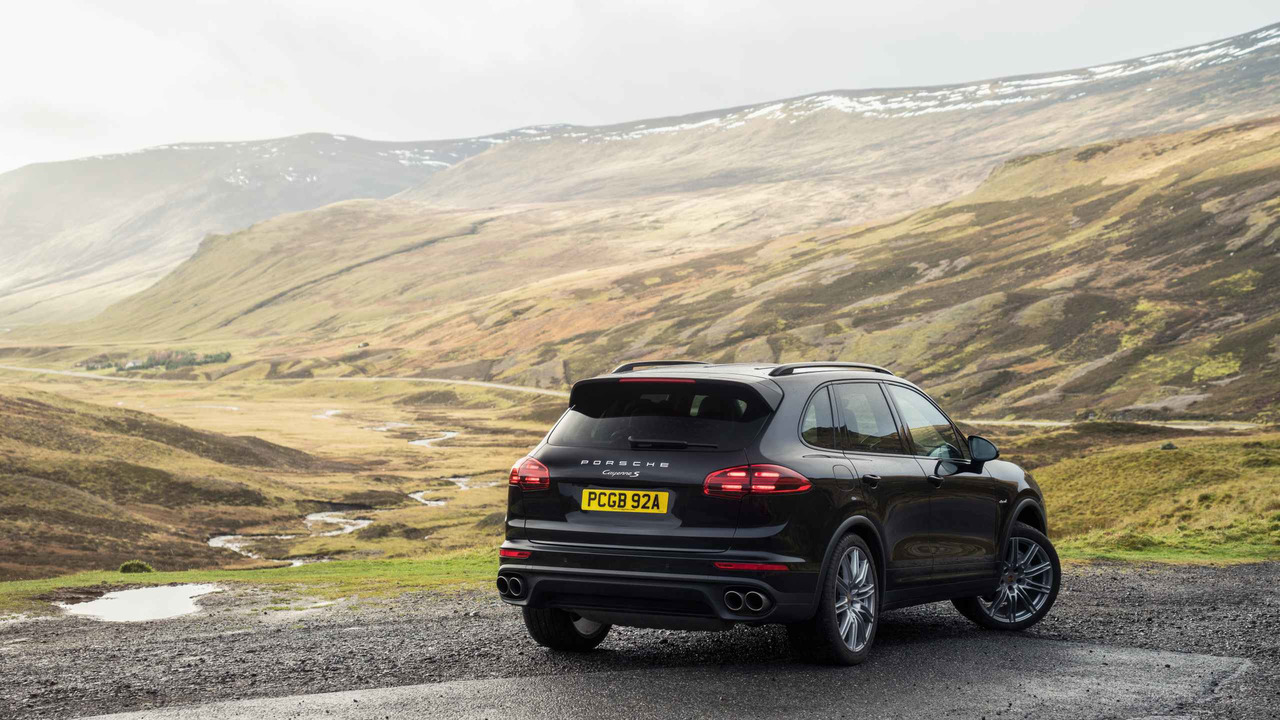 The SUV with a true Porsche heart.

The Porsche Cayenne was the German sports car company’s first controversial foray into the world of SUVs, appearing on the scene to much opprobrium in 2003. Sharing parts with its distant stablemates, the Volkswagen Touareg and the Audi Q7, the Cayenne nevertheless is a true Porsche at heart, placing its emphasis firmly on driving pleasure ahead of other factors. To that end, this second-generation model – launched in 2011 – does not come with the seven-seat option that most other SUVs in this class do, nor does the Porsche have a particularly big repertoire of off-road equipment. All Cayennes use eight-speed automatics and all-wheel drive, with a choice of petrol, diesel, or hybrid power. Performance ranges from the decently quick to the blisteringly rapid, although fuel economy is not the greatest in class.

Did you know? The design lead for the first Cayenne was Brit, Steve Murkett, with help from ‘Butzi’ Porsche – company founder Ferdinand’s grandson.

The Porsche Cayenne, now approaching the end of its second generation, is often credited with being the model that saved the company – although we’d say the Boxster started the ball rolling, and the Cayenne merely capitalised on that momentum. Nevertheless, the Cayenne has been a crucial car for the company, vindicating Porsche’s contentious decision to launch into the SUV arena in the first place – so much so that the Cayenne has since been joined by a smaller sibling, the Macan. The Cayenne is a superb machine with a genuinely sporty chassis and a range of powerful, impressive drivetrains, while the cabin is of high quality too. However, it’s expensive and the goliath cost options list can fast relieve you of a lot of money, while the biggest deciding factor for any buyer considering it will be: can I live with those looks? If the answer to that is yes, there’s no reason to avoid this excellent Porsche SUV.

Beauty is in the eye of the beholder, of course, but there can surely be few people who would assert that the Cayenne is an attractive looking machine. Like so many car companies these days, Porsche likes to have a corporate look and, in its case, that is shaped primarily by the 911 sports car. This is all well and good when marginally shrinking the formula for the Cayman, but trying to stretch the 911’s styling cues onto the frame of an enormous SUV like the Cayenne is a far less successful enterprise. The shocking appearance of the 2003 original has slowly been distilled into something slightly more appealing today, but it remains Porsche’s least likeable design.

A quick, handy Porsche Spotter’s Guide tip for you: the company colours its brake callipers for various models according to their stopping power. Black callipers are found on the Diesel, the S models with just combustion-engine power get grey items, the S E-Hybrid has lurid Acid Green housings, the GTS and Turbo sport red callipers, and the Turbo S comes with bright yellow items – this denotes the standard-fit Porsche Ceramic Composite Brake (PCCB) set-up, which is an expensive option on all other models.

It’s much easier on the eye inside, as the Cayenne features further idiosyncratic Porsche design, such as a sloping transmission tunnel, a lovely three-spoke steering wheel that is mercifully free of a mass of buttons, and a three-dial instrument cluster with the rev counter placed centrally. Apart from the second-gen Panamera, Porsche hasn’t as yet fully embraced the touchscreen era, so there’s a lot of switchgear on the transmission tunnel – but, typically Teutonic, it’s all laid out simply and intelligently, so using it is no hardship.

Porsche has always used high-quality materials for its cabins and the SUV is no exception, with all versions getting at least part-leather seats (full leather is reserved for the GTS and upwards) to make the interior feel plush. Sports seats come into play on the GTS, while the Turbo and Turbo S get Adaptive Sports seats with 18-way electrical adjustment.

The big black mark against the Cayenne is that there is no seven-seat configuration available. The Porsche is not the only big SUV to fall into this trap – the Mercedes GLE is another – but most rivals do offer seven seats as at least an option, while the likes of the Audi Q7 and Volvo XC90 are seven-seaters as standard.

Otherwise, the Cayenne is actually quite a practical machine. All models get 40:20:40 split folding rear seats, an automated tailgate, and eight-way electrically adjustable seats. The steering column can be altered manually for reach and rake, with electrical adjustment a cost option. There’s plenty of useful storage in the cabin and the boot is big, although it depends on the model you’ve picked: the S E-Hybrid holds 580 litres with all seats in place, or 1,690 litres with them all folded away, meaning it has the smallest cargo bay; and the Cayenne S has the biggest load area, with 670- or 1,780 litres.

There’s enough available to make the Porsche one of the most connected cars on the market, but fitting it all will cost you dearly. And why DAB radio – which is now almost standard-fit across the automotive world, including on city cars costing around £10,000 – is a cost option on every Cayenne is a total mystery.

As standard, the SUV gets Porsche Communication Management (PCM) with navigation, Bluetooth, and voice control. Options include the Connect Plus pack (includes Wi-Fi preparation, Apple CarPlay, and Google Earth and StreetView for the mapping, among more), rear-seat entertainment bundles, and a TV function.

A 14-speaker, 665-watt Bose surround sound system is available on all models, except for the Turbo and Turbo S where it is standard fit, while a mighty 16-speaker, 1,000-watt-plus Burmester set-up is an alternative.

There are no finer driving SUVs available elsewhere that could dynamically eclipse the Cayenne. Some competitors get close, but in truth the nearest you’ll get to the Cayenne’s handling abilities will be behind the wheel of its sister SUV, the Macan. The bigger Porsche 4x4 has epic body control, superb steering, and mighty strong brakes (especially with PCCB), that make it feel precisely like the sports-car-on-stilts the company has always wanted it to be.

The pay-off is that it’s not the most refined car in the world, the bigger 20- and 21-inch wheel options bringing plenty of tyre roar at speeds, but you’ll be having so much fun while driving the Cayenne that it won’t really matter. And if you opt for air suspension, the ride is a little more comfortable than on the standard steel springs.

No Cayenne is slow, with a range of six- and eight-cylinder forced induction engines providing plenty of punch. Even the most ‘lowly’ motor, the 3.0-litre turbocharged V6 in the Diesel model, has 262hp and 428lb ft of torque, enough for a best 0-62mph time of 7.2 seconds with a top speed of 137mph. The next engine up is the 4.2-litre biturbo V8 in the S Diesel, which has 385hp and the most torque of any Cayenne – a gigantic 627lb ft. That means 0-62mph in 5.3 seconds and a 156mph top speed.

All the petrol versions have at least 420hp, giving an idea of their searing pace, but the highlight is the deranged Turbo S flagship – with 570hp and 590lb ft – which has supercar-rivalling stats: 0-62mph in 4.1 seconds and a 176mph maximum speed. Perhaps more tellingly, its 50-75mph ‘overtaking’ acceleration is a frightening 2.7 seconds.

No Euro NCAP test of the Cayenne has ever been conducted, although it would likely score highly, as standard equipment includes six airbags, two ISOFIX fittings, Porsche Hill Control, front and rear parking sensors, a tyre-pressure monitoring system, and post-collision braking.

Options include another pair of airbags in the rear, a fire extinguisher, speed limit indicator, adaptive cruise control, Lane Change Assist, Lane Departure Warning, and a choice of a reversing camera or 360-degree monitors. With the exception of adaptive cruise, all of these are three-figure cost options.

The Turbo and Turbo S models get metallic paint as standard, but they’re optional on all the rest of the Cayennes. Choose from Rhodium Silver, Moonlight Blue, Carrara White, Jet Black, Mahogany, Palladium, Sapphire Blue, or Meteor Grey. Two solid colours, known as simple White and Black, are the no-cost options elsewhere, and the Turbo/Turbo S cars can be finished in these flat coats if desired. At the other end of the scale, two special metallic paints – Carmine Red and Purpurite Metallic – are more again.

Porsche doesn’t do trim levels, as such, instead letting the engine fitted determine the level of standard equipment. Thus, the range runs (according to list prices) Diesel, S, S E-Hybrid, S Diesel, GTS, Turbo, and then Turbo S. We would urge caution about going tick box-mad with the extensive and costly options list, because the basic specification is not that bad. All cars will have at least 18-inch wheels, cruise control, bi-Xenon headlights, four-point LED daytime running lamps, and dual-zone climate control.

The Cayenne is long and wide, although without taking the mirrors into account it’s 1,939mm across, but it is marginally lower than similar machines from rivals.

Although Porsche fits every Cayenne with auto start-stop and a coasting function to save fuel when off the throttle at speed, the fuel economy of the range isn’t anything spectacular. Of the pure diesel and petrol models, only the Diesel gets beyond 40mpg for its official economy, with emissions of 173g/km. All of the rest emit more than 200g/km, making them punitive on taxes, while the Turbo S will return less than 25mpg combined at the absolute best. Obviously, those looking for the lowest Benefit-in-Kind/VED taxation should go for the S E-Hybrid, which delivers as much as 85.6mpg with just 75g/km CO2. All Cayennes are in groups 40-50 for insurance, making them pricey to cover.

Servicing intervals are reasonably lengthy at 20,000 miles, but the cost of them is steep, so have a look at the fixed-price maintenance packages Porsche offers. There’s no indication the Cayenne should be unreliable, but, for peace of mind, the manufacturer warranty runs for three years and unlimited miles, and it can be extended annually after that for a cost.

OK, so the Cayenne does come with some desirable toys as standard and the base £53,000 starting price isn’t wholly unreasonable, but that options list can soon take the Porsche’s printed prices from semi-affordable levels into the realm of the very expensive. Also, we feel there’s a lot of connectivity and safety equipment that ought to be standard fit on some higher models. The Turbo S is a good barometer of how comparatively expensive the Porsche Cayenne is – with its 570hp V8, no one will complain about its punch… but a near-£120,000 starting ticket compares unfavourably with its performance contemporaries, the BMW X6 M, Mercedes-AMG GLE 63 S, and Range Rover Sport SVR, all of which start at less than £100,000.