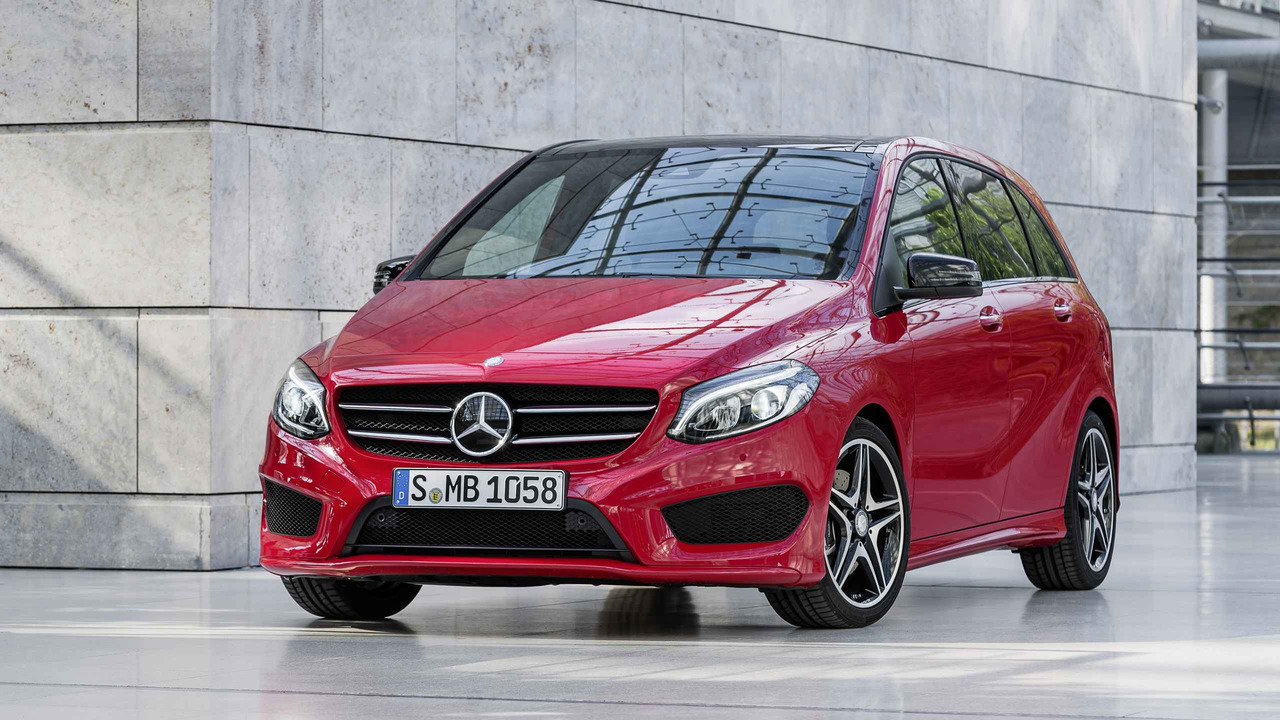 Simple and straightforward transportation, but more prestigious than its rivals.

When Mercedes decided to make the current A-Class more like a conventional hatchback, it meant that the company could leave the B-Class alone to fulfil a function as the taller, more pragmatic MPV of its compact car range. The B-Class has much in common with the A-Class, such as a range of four-cylinder, turbocharged engines, the option of front- or all-wheel 4Matic drive, and a choice between two gearboxes – however, there are no performance variants for the B-Class, as with the A-Class, although there is a clever Electric Drive model (known as the B 250 e), which provides fully zero-emissions running.

Did you know? The B-Class Electric Drive has a ‘half-sandwich’ floor, which is used to house the lithium-ion battery pack to preserve interior space.

The Mercedes B-Class is not one of the company’s most exciting products, but then – as an MPV – it’s not meant to be. What it does is offer simple, straightforward transportation to young families who want something a bit more prestigious than a Renault Scenic or Ford C-Max, and it provides more space and practicality on-board than the A-Class with which it shares so much. Watch out for a poor ride on models with bigger alloys and firmer suspension, and don’t go expecting any dynamic fireworks from it, and you’ll find it’s a perfectly acceptable compact MPV. But there are cleverer, cheaper, and more likeable rivals in this segment, which we’d advocate you’d look at first and foremost. Not even the excellent B 250 e Electric Drive model is enough to make the Mercedes class-leading.

There’s only so much you can do with an MPV’s two-box shape and Mercedes’ designers have at least had a go at making the B-Class look halfway interesting, the main flourish being that extravagant, tick-shaped swage line that starts off at the bottom of the front doors and then slices up towards the rear light clusters. It also has the corporate ‘face’ of Mercedes-Benz and perfectly neat rear-end styling, but as it’s taller and narrower than an A-Class hatch, pretty the B-Class is not. You can add a body kit in the AMG Line specification and there’s even the option of a Night Package (including black exterior detailing, privacy glass, and dark AMG 18-inch alloys) to beef up the aesthetics, but at the end of the day you’ll still be left with a slightly uncomfortable-looking minivan. A Citroen C4 Picasso or Renault Scenic would be a far more visually pleasing vehicle to have parked on your driveway.

Sharing architecture with the A-Class, CLA, and GLA, there’s a high-quality feel to the B-Class’ cabin, thanks to good fit and finish, and an attractive layout. There’s obviously more headroom in the taller B-Class and it also comes with rear seats that can be slid forward to maximise boot space, leading to a useful 666 litres of stowage with five seats still in place. It’s ergonomically idiosyncratic within, especially if you pick the automatic models with column-mounted shifter, but familiarity soon turns operating the layout into second nature.

So, you can have 666 litres of boot space with all seats in place, but if the rear-seat passengers want some comfort, then you’re looking at 488 litres, rising to a huge 1,547 litres with the 60:40 split rear seats folded away. The Electric Drive model is odd – it has slightly different dimensions to the regular B-Class and a raised sandwich floor at the rear to house the battery pack, which results in a larger ‘standard’ boot at 501 litres, but a smaller ultimate cargo volume of 1,456 litres.

The steering column and the front seats are all manually adjustable across the board, while the slightly elevated driving position compared to an A-Class, coupled with excellent visibility out of the car, means the B-Class is a cinch to drive in urban traffic.

There’s a good level of in-car tech and connectivity, and some choice options for reasonable prices, on the B-Class. A six-speaker sound system with MP3 compatibility, Bluetooth, two USB sockets, an SD card slot, Mercedes Me connectivity software, and Apple CarPlay are standard fit, while the SE has a seven-inch touchscreen and all the other cars (Electric Drive variants included) have an eight-inch item. Satnav isn’t standard on any B-Class but the preparation for Garmin Map Pilot is included on all examples, making it a cheap upgrade, while the more advanced Comand Online infotainment pack has hard-disk drive mapping. More annoyingly, DAB is also a cost extra in the B-Class range, although the option of a Harman Kardon Logic 7, 5.1 DTS surround sound system is welcome – it has 12 speakers on the regular B-Class cars, and 11 on the electric model.

The B-Class is a sedate steer, possessing the same sort of competent but safe chassis as the A-Class, yet without the added benefit of a smoother ride. Indeed, the B-Class can be a bit unrefined and uncomfortable on the bigger alloys and the lower suspension of the AMG Line variants – so stick to the lower grades, where it will provide fuss-free (if also fun-free) motoring.

It has a more limited engine range than the A-Class, doing away with some models at the top and bottom of the hatchback line-up to stand with three diesels and two petrol options. The 1.5-litre turbodiesel in the B 180 d delivers 109hp, 0-62mph in 11.9 seconds, and a top speed of 118mph; that’s leisurely stuff.

Far better to step up to the old 2.1-litre four-cylinder diesel, which offers either 136hp in the B 200 d or 177hp in the B 220 d, the latter being the only B-Class that can be equipped with 4Matic all-wheel drive. All variants of the 2.1 diesel trim the 0-62mph time down to well below 10 seconds, with top speeds beyond 130mph, and that means they’re much more driveable in day-to-day conditions, with only a minimal effect on economy and emissions.

For the petrol B-Class models, there’s just a solitary 1.6-litre four-cylinder turbocharged engine split into two power grades: it has 122hp as the B 180; or 156hp as the B 200. These are fine motors and they provide sprightly performance.

All engines come with a six-speed manual gearbox as standard, with a seven-speed automatic as an option – the B 220 d, though, only comes with the auto.

The exception to the dull B-Class rule is the Electric Drive, or the B 250 e, as it is badged. This uses a 179hp and 251lb ft electric motor driving the front wheels through a single-speed reduction gear. The top speed is limited to 100mph, but it’ll do 0-62mph in 7.9 seconds and it’s a really good machine to be behind the wheel of; even better, it has a higher standard of refinement and ride comfort than the regular B-Class cars. It’s just a shame it has a limited range between charges, otherwise it would unquestionably be the model to have.

With a Euro NCAP five-star rating, the B-Class is a safe car for families. It has a lengthy standard roster of items, including seven airbags, Active Brake Assist, the Attention Assist driver fatigue monitor, two ISOFIX seat mountings in the rear, Brake Assist with Hold function and Hill-Start Assist, and a tyre-pressure monitoring system. Options include Lane Tracking and Driving Assistance Packages; the former has Blind-Spot Assist and Lane-Keeping Assist, while the latter adds these two items, as well as Distronic radar cruise control and Mercedes’ Pre-Safe anticipatory safety system.

The regular B-Class specifications run SE, Sport, and AMG Line. The B 250 e is only available in Sport or Electric Art.

AMG Line is really all about the looks, with the exterior body styling, 18-inch AMG-design alloys, and interior detailing including carbon fibre-look trim, stainless steel sports pedals, and Artico and Dinamica (like Alcantara) seats. It also gets the suspension lowered by 20mm at the front and 15mm at the rear. All cars can be had in all three trims, bar the B 220 d, which is only available in Sport or AMG Line.

The Electric Drive Sport has a different design of 17-inch alloys, finished in Himalaya Grey, as well as a chrome beltline trim running around the car. The Electric Art has 18-inch matt black alloys, door mirrors finished in South Seas Blue (a former A- and B-Class body colour that is now discontinued), and ambient interior lighting.

The B-Class is a little longer and taller than the A-Class on which it is based, although – with or without its mirrors (1,786mm regular cars, 1,812mm B 250 e) – it’s also slightly narrower.

For the regular line-up, economy is broadly on a par with the comparable A-Class models, despite the B-Class being taller and heavier. Expect anything between 49.6mpg from the manual B 200 up to almost 71mpg with either example of the B 180 d or the B 200 d 7G-DCT. However, the B-Class is in slightly higher insurance groups of 15-24 and it also doesn’t have the best residual values, a fact exacerbated by its higher purchase prices in the first place.

The B 250 e is a law unto itself and it proves very economical to run, courtesy of the fact it is a pure EV. It will sit in the lowest Benefit-in-Kind bracket of nine per cent and is exempt from road tax in perpetuity, even under the revised VED laws of 2017. The B 250 e has a claimed range of 124 miles, with battery usage in the order of 16.6kWh/62.5 miles. There’s an Energy Assist package, which includes the Range Plus feature, that gives the Electric Drive B-Class an additional 18 miles of range before it needs a charge; it’ll take anything between nine and twenty-one hours to fully charge it from a 230V/13A domestic socket, or between three and four-and-a-half hours on a rapid 400V/16A wallbox.

The A-Class is not a faultless car and so the B-Class could throw up a few issues for owners. Like any Mercedes, it comes with a three-year, unlimited-mileage warranty and the Assyst in-car service indicator, which sets the service schedule according to how the car is driven. Various service and maintenance inclusive packs can be bought to keep the running costs to a minimum, with fixed monthly fees – the Electric Drive is a little bit less money per month under this scheme than a regular B-Class.