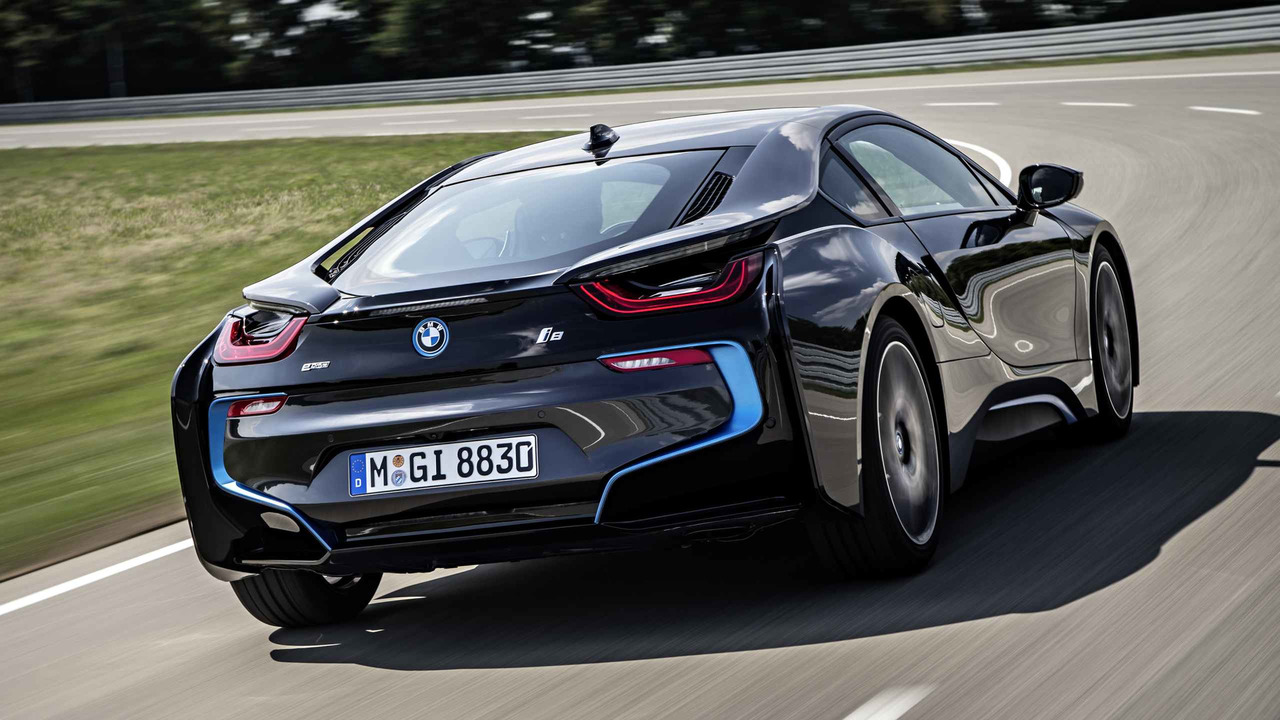 What would you say about a 1.5 litre engine supercar?

The BMW i8 represents a new way of thinking for the German company. Here is a high-performance, mid-engined supercar… that’s powered by a 1.5-litre, three-cylinder engine, and which costs more than £100,000, thanks to the liberal use of carbon in its construction. What makes the i8 perform so well, and also what makes it so intriguing, is that it is a plug-in hybrid part-electric vehicle, capable of running in zero-emissions mode for extended periods. That also makes it somewhat unique in the automotive world, as there are not any true, direct rivals for this other-worldly BMW. The all-wheel-drive i8 comes as one model alone, offering buyers the choice of selecting from a few interior colour schemes, a handful of body paints, and a few optional extras.

Did you know? While the production version came to market in 2014, the i8 can trace its roots back to the Vision Efficient Dynamics concept car of 2009.

This is the future of performance car motoring. Sure, if you get hyper-picky, the BMW i8 isn’t flawless; it is hopelessly impractical thanks to one of its defining features, the butterfly doors, and for a car with a 1.5-litre, three-cylinder engine closely related to that in the MINI Cooper, its asking price might seem utterly exorbitant. And yes, the highly attractive on-paper economy figures are unrealistic for owners who like to regularly use said combustion engine.

But just look at it. This is a slice of science fiction made real, a scintillating machine that manages to back up its traffic-stopping looks with a chassis of rare talent. The i8 is therefore not only massively ahead of its time, it’s also a message of hope for the future – hope for petrolheads, who worry that automated cars, downsizing, and plug-in hybrids will eradicate any pleasure remaining in the act of driving. For those reasons, the BMW i8 is fully deserving of the top critical marks we can give it.

If a supercar’s remit is to draw a huge crowd of admirers every time it rolls to a stop, the BMW i8 has this game completely sewn up. There is nothing else like it on Earth. So many of its details, designed to flow air more seamlessly around its form in order to further save fuel, are unheard of on other cars – witness the Air Curtains on the front bumper, or the brilliant Rear Aero Decks that sweep around from the roof and merge into the boot lid. And then, as if that wasn’t enough, when you open the doors they hinge upwards and away, further adding to the out-of-this-world mystique of the i8. Conventionally pretty, the BMW is not; but as an utterly stunning piece of car design? It’s beyond reproach.

The i8’s dashboard can’t quite live up to the theatre of the exterior, but it’s still beautifully styled and markedly different to the norm. BMW gives its i-cars a different design of steering wheel with a domed centre boss and then two 8.8-inch digital displays make it feel further like an anachronistic recluse from the film Minority Report. Like any BMW, the i8’s cabin is wonderfully screwed together and ergonomically sound, while the near-flawless iDrive infotainment control makes itself wholly welcome here.

Keeping the sci-fi motif going, BMW offers five ‘interior worlds’ for you to choose from. The basic choice is Neso, but cost options include Carpo Dark, Carpo Light, Carpo Carum Grey, and Halo – all of which clothe the leather seats and upper/lower portions of the dash in varying contrast colours. All of them also look superb.

This is where the i8 loses marks. The car has a carbon-fibre passenger cell, design to keep the weight down. However, it introduces massive sills to proceedings, so while those impressive dihedral doors open up a long way, ingress and egress is still an inelegant affair, even for those who are of a slighter constitution. Then there are the rear ‘seats’, which are laughable. Even children wouldn’t want to be in them for long, so don’t expect this BMW to make the purely-two-seat Audi R8 look foolish. The i8 also has a minuscule boot capacity of 154 litres, although you can at least use the rear seats as additional storage space. Comfort Access keyless entry is an option, although heated and electrically adjustable front seats are standard fit. The driving position is excellent and visibility out is largely very good, if a little compromised to the rear.

It’s a futuristic car, so it needs to be highly connected. For its purchase price, the BMW i8 comes with a lot of equipment fitted as standard that would be optional on a Porsche 911, so expect satnav, a 20GB hard-disk drive, DAB radio, enhanced Bluetooth with USB and Voice Control, a BMW Advanced Loudspeaker sound system, a digital cockpit, the Head-Up Display (HUD), and the iConnectedDrive suite of BMW Apps, BMW Emergency Call, Online Services, BMW TeleServices, Concierge Service, Remote Services, and Real-Time Traffic Information. Only Online Entertainment and a Harman Kardon audio set-up are options.

The BMW i8 isn’t absolutely perfect dynamically, as cars like the Audi R8 and Porsche 911 will provide a more involving drive. But for a massively advanced, plug-in hybrid that’s a first-time effort for a company more traditionally used to punting out sporty, internal combustion vehicles, the i8 is remarkable. It’s far better to drive than you might imagine, if you’re only looking at its small engine’s published stats and the car’s skinny, eco-friendly tyres.

At the front of the i8 is the electric motor, rated at 131hp and 184lb ft, and driving the leading axle via a two-speed reduction gear transmission. Mounted in the middle is the 1.5-litre, turbocharged three-cylinder petrol engine, delivering a further 231hp and 236lb ft through a six-speed automatic gearbox to the back wheels. The combined system output maximums quoted are 362hp and 421lb ft, but the really clever bit is that there is no physical drive link between the two axles – the BMW is four-wheel drive by dint of its sophisticated on-board electronics.

This means the i8 can actually be front-, rear- or all-wheel drive, depending on what mode it is running in, but the salient point is this: when it links the two power sources together, it’s tremendously fast. Acceleration builds quickly and smoothly, the BMW’s brain in a flash working out which motors you need according to the weight of your right foot. What’s so stupefying about all these hyper-intelligent underpinnings is that they work completely seamlessly and unobtrusively in day-to-day driving.

OK, so the three-cylinder’s engine note is artificially augmented in Sport mode, which annoys purists, but the noise this hybrid makes is fantastic. And so is the ride/handling balance. The i8 never feels as limber as a mid-engined non-hybrid, but it’s still one of the company’s finest chassis, with loads of grip, minimal body roll, and impressive controls in the form of the brakes (lacking any hint that there's regeneration at play) and steering. Yet, thanks to standard-fit Variable Damper Control and its singular focus on aerodynamics, the car is very quiet and comfortable on a motorway cruise or ambling about town, making it a supreme all-rounder of considerable talent.

Again, the i8 is stocked to the hilt. Six airbags, ESC, ISOFIX seats, and a tyre-pressure monitoring system are all big ticks, before we come onto a kit list that includes the Driving Assistant package (including Surround View cameras, Speed Limit Display, High-Beam Assistant with Adaptive LED Headlights, and an autonomous braking function, among more), the aforementioned HUD, parking sensors front and rear, and automatic lights and wipers. The only options are an external sound for when the car is in eDrive mode – to prevent pedestrians claiming they never heard the i8 coming – and a set of super-cool Laserlights for the front of the BMW; these are headlights that project much further into the dark than even LEDs, although they do cost more than £5,000 to fit. The i8 comes with a mobility temporary tyre inflation kit only, rather than a space-saver spare wheel or run-flat tyres, as a final note.

In the regular palette, entirely made up of metallic colours, there are just three choices. Sophisto Grey is the only no-cost finish, while Ionic Silver adds more than £400 to the bill and Crystal White is a four-figure option. Of these, the grey and the white can have either Frozen Grey or signature BMW i Blue highlights; the silver only comes with the blue accents.

However, in the middle of 2016 BMW added the Individual colours to the mix. This basically means you can select from pretty much anything in the company’s range of paints, although BMW will try to steer you towards six eye-catching finishes: Frozen Black, Frozen Grey (both matte-effect), Solar Orange, Speed Yellow, Java Green, and Twilight Purple Pearl. These can also be teamed to black alloys for the most impactful look, although every one of these finishes is really expensive.

There is just one and, as we keep saying, the i8 is comprehensively specified from the factory, as befitting its thoroughly prestige status – and that price tag. Standard items not already listed include the fancy BMW Display Key, cruise control with braking function, dual-zone climate control, electrically folding and heated door mirrors, a leather instrument panel, three-mode Drive Performance Control, and 20-inch alloys. Options beyond those we’ve specified elsewhere really only amount to different wheel designs, black brake callipers with an ‘i’ Blue highlight, similarly blue seatbelts, Anthracite headlining, and a leather engine cover.

The BMW i8 is low and reasonably long, but its width is key. It is fatter at the rear axle than the front, so watch for that, and even without mirrors it’s 1,942mm across; with them folded out, it’s more than 2.2 metres wide.

Beyond the extraordinary looks, the main reason you’d buy the i8 is for its equally extraordinary on-paper eco-stats. We can have a huge debate about how the NEDC fuel consumption test wildly skews the economy figures for plug-in hybrids, meaning the 134.5mpg figure is almost wholly unattainable – but the i8 should still give you back 40-50mpg even when driven reasonably quickly, which we think is incredible stuff for a car as fast and flashy as this.

Furthermore, the i8 can run for 22 miles on electric power alone, so if you have a short commute and you can charge it regularly, you might just get into three figures for fuel economy, and maybe closer to the manufacturer’s official number. Also, its 49g/km CO2 output means it is cheaper in year one for VED than any diesel hatchback, while its Benefit-in-Kind company car tax is in the lowest possible nine per cent bracket. No hiding the insurance group 50 rating, though.

The i8 is too new to call on reliability, although its turbocharged petrol engine shouldn’t cause any issues. While the main bulk of the car is covered by a three-year, unlimited mileage warranty, its lithium-ion battery pack has eight-year, 100,000-mile cover for additional peace of mind. Like any BMW, the i8 employs Condition-Based Servicing, to tell its owner when it needs to go into a garage for attention. An all-inclusive maintenance pack for the first five years of ownership is well worth looking into.

The BMW i8’s six-figure asking price makes it one of the company’s most expensive cars in, for want of a much better word, ‘basic’ format – but then look at the cutting-edge technology you’re getting for that. This car blends head-turning looks, a fully specified interior, the chassis and power of a sports car, diesel-like running costs, and the desirability of a rare BMW into one highly likeable package. An Audi R8 is more money without any toys added; a Porsche 911 in equivalent specification is broadly the same price – but far less interesting overall, compared to the i8.