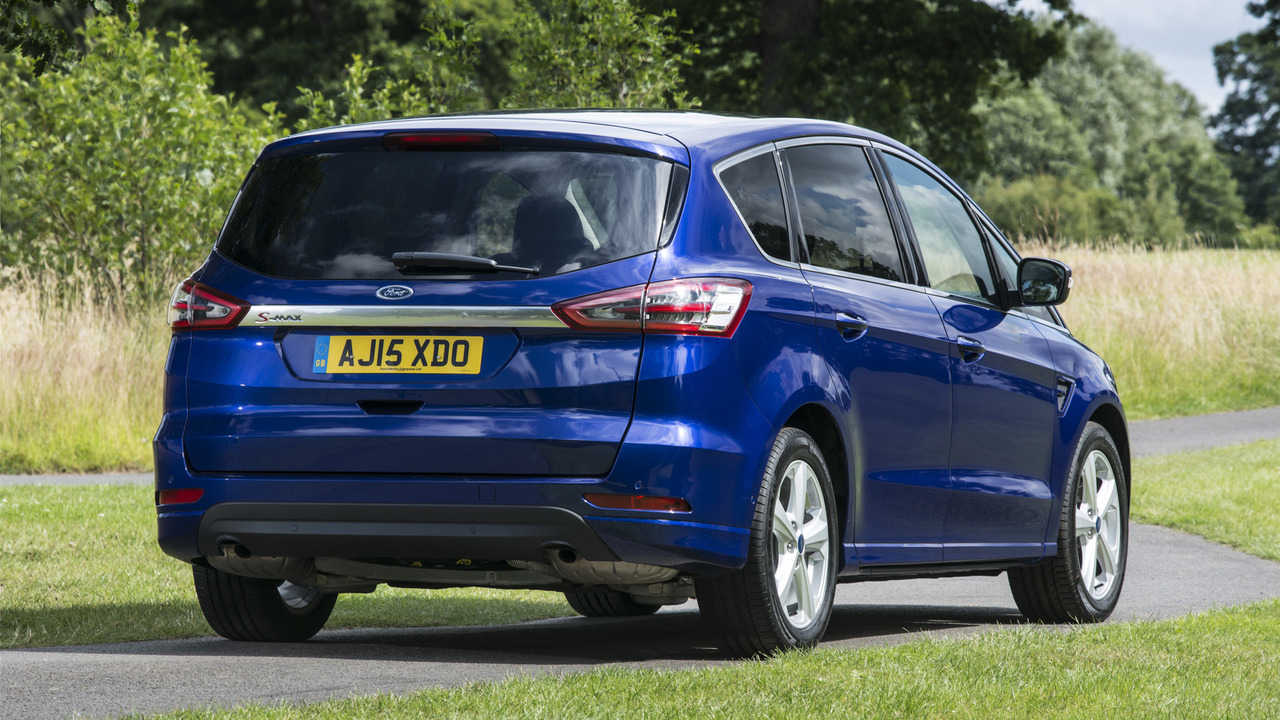 It’s not uncommon for a manufacturer to offer more than one seven-seat MPV, and Ford is one of those brands. The Galaxy is its largest and most spacious model, but the S-Max has a reputation for being better to drive – so much so, it's even able to lure across Audi and BMW drivers. It’s still a spacious car, though, targeted squarely at families.

Did you know? The S-Max is only sold in Europe, as the US market sees it as far too small by its own standards.

Ford’s MPVs have a good reputation as low-compromise family cars, at least from the driver’s point of view. This second-generation S-Max hasn’t really moved the game on, though, and rivals have caught up, all-but eliminating its old advantages from behind the wheel. On the other hand, it’s still a comfortable and reasonably dynamic MPV with massive space for five people, or plenty of room for seven without too much luggage.

As the notoriously dull MPV sector goes, the S-Max is one of the lookers. Dealing with a class of one-volume shapes rarely ends up with anything distinctive or alluring, but the S-Max makes a decent fist of not seeming quite so boring as the rest. In an office full of limp grey suits, the S-Max is a smart blue pinstripe.

It’s a conventional mid-size MPV design with ordinary, front-hinged doors all round, a high roof and a simple, one-line silhouette. It has the familiar Ford family grille and hawkish headlights backed up by front fog lamps and a shapely bonnet. A strong waist-level crease gives some shape to the door panels, but it needs big wheels to make the best of the look.

There is too much empty plastic space inside the S-Max to make it any kind of design classic, and the plastics aren’t universally great quality. The main contact points feel high-quality and robust, but run your hands around over the centre console and dashboard and it’s not all so good.

At least the design is clean and simple. All models have a large, central colour screen into which many of the functions have been moved. It leaves the centre console to the likes of the audio on/off button, volume dial, temperature and airflow adjustment, heated windscreen buttons and air conditioning on/off.

The S-Max rides really well, especially on smaller wheels. It has a floaty feel that should keep all three rows of passengers happy, and although there’s a little shudder when the car hits a bad expansion joint or pothole, it’s generally well composed. The front and middle seats are better, but the rear, more space-restricted chairs aren’t as cramped as in some MPVs.

The ability to carry seven people isn’t necessarily what people buy the S-Max for. Yes, it’s a handy ace up parents’ sleeves when they need it, but just as important for the average two-child family is the much-increased boot size the S-Max benefits from when the third row of seats is collapsed.

It’s good to see that the rear seats fold completely flat, and the middle row gets almost flat as well, turning the S-Max into a really handy van. There’s at least as much extra load space in both two- and five-seat modes as in almost any estate car or comparable SUV. Only the Skoda Kodiaq offers slightly more space in all seating layouts.

Keyless entry and start is standard, and on all models can be upgraded with a powered hands-free tailgate. Zetec models do without things like cruise control and acoustic front side windows, which are standard on higher models, but don’t fare too badly. They come with front and rear parking sensors, a Quickclear heated windscreen and dual-zone climate control with vents in the rear passenger area. DAB radio is standard on all models, too, and Ford has maintained a CD player.

Higher up the range are automatic headlights and windscreen wipers, a larger colour display and options for much more equipment that isn’t available on the Zetec. Heated seats are standard on Titanium Sport, with Vignale cars having the option of heated, cooled and massaging front seats.

Ford’s Sync 3 is standard on all models, giving a class-leading level of voice control over most of the key systems like media, navigation (standard on Titanium upwards) and climate control. As well as DAB radio, there is AM/FM and Bluetooth connectivity, but no USB port. A higher-powered Sony stereo with more speakers is available as an option .

Once the defining feature of the S-Max, compared to its latest rivals the Ford fails to stand out. The first generation was a clear cut above the rest from the driver’s seat, but this one is little better and has been caught – and passed, in one or two cases – by rivals. There’s nothing wrong with it, of course; it still has accurate steering for the class and grips well, with supple suspension helping it to hold a line around bumpy corners. But it’s no longer noticeably better than most of its competitors.

Of the available engines, there is still a halo model in the shape of the 240hp Ecoboost petrol automatic, but it feels less appropriate now than it once did. The bigger-selling diesels are a better bet, with the 150hp version the minimum to look at if you regularly tow or carry a full car, while the 180hp version has more torque and makes lighter work of heavy loads. All-wheel drive is available with these two engines, if needed.

An interesting option, only offered with the Sony stereo, is the Front Wide-View Camera, which uses cameras placed on the front and front sides of the bumper to create a picture of the space you’re pulling out into. It allows you to see approaching traffic, including cyclists, even when a car or truck is blocking your direct line of sight.

As for active safety systems, traffic-sign recognition is standard, along with Ford MyKey, which allows the master key holder to set maximum top speeds and stereo volumes for slave key holders. However, since young, inexperienced or otherwise untrustworthy people aren’t likely to want to drive a seven-seat MPV in the first place, let alone be able to acquire insurance on one, it seems a bit pointless unless for playing practical jokes on your spouse.

Active safety systems disappointingly relegated to the options list include Pre-Collision Assist, Lane-Keeping Alert and Lane-Keeping Aid, Intelligent Speed Assist (which automatically sets the car’s speed limiter to the limit posted on the last sign) and a rear-view camera. It’s a poor show given the size and price of the car; many cheaper, smaller models make at least some of these features standard.

As with other Ford models, there are three grades of paint. The one Standard grade choice is Blazer Blue, a flat, dark blue that looks good on the S-Max, so it’s not necessarily worth upgrading. Metallic and pearlescent options fall into categories called Premium and Exclusive. Vignale models get a Premium colour as standard: the dark grey Magnetic.

Also in the Premium shop window are Frozen White, Moondust Silver, Shadow Black and Deep Impact Blue, while the two Exclusive shades are the lovely Ruby Red and Guard, which is a dark green that doesn’t really suit this sort of car.

There are four trim levels, or rather three plus one, as Ford would like to consider the Vignale model as a semi-separate entity. S-Max is not a bad place to start or even to stay at, with the key comfort bases covered and gadgets like parking sensors thrown in as standard.

Titanium is handy for its navigation system, which could be priceless to many owners. It gets a digital instrument cluster and swaps the option of a 120hp diesel for a 180hp one (to accompany the 150hp one). It’s also smarter to look at, with silver trim around the windows and upgraded headlight clusters.

For Titanium Sport and Vignale, only the most powerful engines are available. They both get 18-inch wheels as standard and make the most of the S-Max’s looks. The Vignale, though, adds subtle extra bodywork trim and uses extremely high-quality materials inside, most notably the leather seats. It alone gets adaptive, cornering LED headlights, and more of the safety equipment is standard.

It may not be Ford’s biggest MPV, but the S-Max is still a big chunk of car. It feels noticeably wider from behind the wheel when compared to most five-seat cars, but compares directly to the feel of larger SUVs. It’s not quite as long as a typical large executive car, so length is generally less of an issue in daily use, and very few car parks have height restrictions severe enough to affect it.

Fuel economy, at least on paper, isn’t at all bad for a car of this size. Official mpg figures ranging up to the mid-50s look impressive, but the real world throws up a different end-result. The S-Max needs to be piloted very carefully indeed to have any hope of topping 50mpg, except on a steady motorway cruise – with an average of around 40mpg typical. It can be higher, but with frequent school runs and traffic jams it can also be lower.

Depreciation is not the S-Max’s friend. It loses by far the greater part of its value in the first three years, despite being better in this regard than the old one. Buyers should be aware that the S-Max is a car to keep for the longer-term in order to get the best value out of it.

Since personal injury claims are one of the most expensive bills that car insurers have to pay, seven-seat MPVs are a higher risk than similarly-sized five-seat estates. The S-Max isn’t a car that’s likely to be driven hard or fast, but insurers work in mysterious ways.

Ford’s reliability record is poor, with the Fiesta, Kuga and Mondeo all listed as below-average in the 2016 Auto Express Driver Power survey. The S-Max didn’t gain enough responses from owners to have been included in the 150-car sample, but the outlook is bleak, especially for higher models with more electrical systems and greater complexity.

The S-Max looks unreasonably expensive next to the exceptionally good-value Vauxhall Zafira Tourer, but holds its own against the likes of the SEAT Alhambra and BMW 2 Series Gran Tourer. That said, the former is more spacious and the latter better to drive.