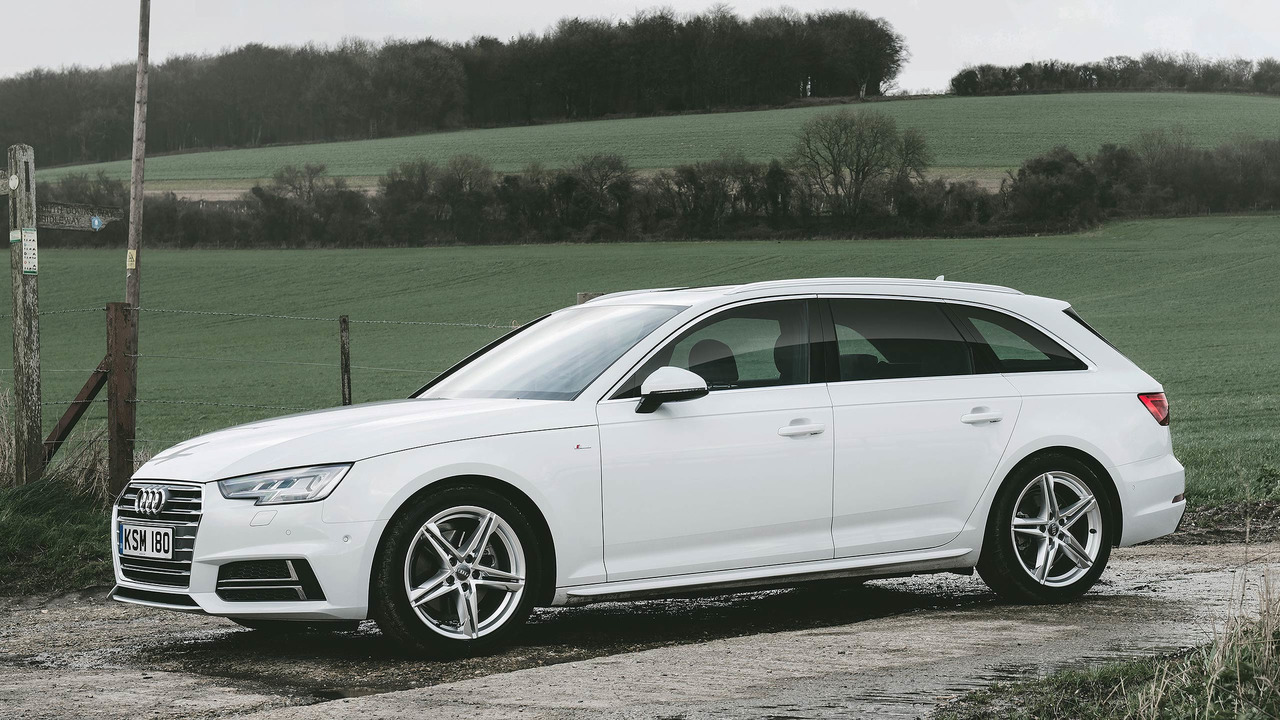 An estate with genuine good looks and a luxurious feel.

Premium estates are popular and more practical alternatives to their saloon brethren. The Audi A4 Avant is one of the best of the breed. Elegantly styled, it has an exceptional interior and cut-above road manners that make it feel like a genuinely upmarket car. It’s commendably practical as well, and the Allroad version makes for a convincing soft-roader for those who are decidedly anti-SUV.

Did you know? The first Audi A4 Avant didn’t go on sale until 1996, several years after the launch of the original Audi 80-replacing A4 saloon.

Mid-size premium estates solve the practical problems of junior executive saloons in a stylish manner that, for many, is more appealing than the four-door alternative. The Audi A4 Avant competes with the BMW 3 Series Touring and Mercedes-Benz C-Class estate, and is perhaps the most convincing junior exec wagon on sale. It’s a little more competitive and well-rounded alongside its contemporaries than the A4 saloon, while also proving more distinctive to look at. When combined with the established strengths of the latest A4 range, it makes for a competitive package that’s generally hard to fault.

Think the Audi A4 saloon is a little bit too derivative? Enter the A4 Avant, which, thanks to its more characterful rear-end design, cuts more of a dash on the road and better shows off the new A4’s tight, precision-built look.

The rake of the rear screen, combined with the elegant downward sweep of the side windows, makes the A4 Avant look that bit racier and more fastback-like than your regular boxy estate. Even the standard cars have a bit of kudos from Audi’s famed fast estates, something the wide rear lights and large roof spoiler further enhance.

The rest of it is as per the A4 saloon, defined by the sharp side feature line that cleverly blends into the bonnet shut line, and those clean and carefully crafted body sides that exude solidity. All models get LED daytime running lights, but the car looks best with the full LED lamps of S Line models. WIth their extended bodykits and larger alloys, this trim represents peak Audi A4 Avant design.

No two ways about it, the latest Audi A4 Avant has an exceptionally well-crafted interior that’s both great to look at and a delight to use. Quality is class-leading – yes, better even than the Mercedes-Benz C-Class, which is surprisingly rattly in places – and the amount of careful detail that’s gone into the cabin makes the 3 Series Touring look substandard by comparison.

Highlights include the crisp, free-standing infotainment screen in the centre of the dashboard, Audi’s watch-like touch-sensitive heater controls and a set of instruments that even in their most basic form are like those from a luxury car. You can have an enhanced display between them, which can show sat nav mapping, or go for the full showcase of Audi’s electronic TFT Virtual Cockpit.

The A4 Avant is a comfortable car. All models get heated leather seats for starters, enhanced further by moving to one-up Sport trim with its better-bolstered and more adjustable sports seats. The driving position itself has a broad range of adjustment and those in the back will be a bit better off because there’s 18mm more headroom than in the saloon.

Audi leads the way for boot capacity – despite that svelte fastback rear window. Seats up, there’s 505 litres of boot space (compared to 480 litres for the saloon), which extends to a pretty commanding 1,510 litres. The load sill height is also lower than in the saloon, making it easier to slide items in and out. The load bay is a useful one-metre wide, and there are lashing points built into the floor.

An electric tailgate is standard, as is a rather clever electric load cover that auto-retracts when the boot is opened so you can load items more easily – before sliding back as you close the boot to keep your things from prying eyes.

Audi’s mantra is ‘progress through technology’ and the A4 Avant lives up to this, even in its most basic guise. All models come with a seven-inch MMI colour infotainment display, compete with Audi Smartphone Interface that handles both Apple CarPlay and Android Auto. Bluetooth is included too, as is DAB radio and two USB charging sockets – so you can use your smartphone via MMI and still plug another device in.

Front and rear parking sensors are standard, as is keyless go that lets you chuck the key in the centre console and start the car with a button instead. Note, this isn’t keyless entry, though: you still need to use the remote fob to lock and unlock. The only omission on the standard SE is sat nav, which comes with Sport trim. The regular eight-speaker stereo is also upgraded to a 10-speaker Audi Sound system. S4 models, meanwhile, get an enhanced infotainment system with MMI Navigation Plus and 8.3-inch colour screen. A fancy ‘handwriting-reading’ MMI Touch control panel is standard, too.

The A4 Avant is a very refined and grown-up car to drive, with a focus on ride comfort that shows how much Audi has developed in this area in recent years. With a supple, well-cushioned and quiet suspension, the A4 Avant is appreciably smoother than a BMW 3 Series, and perhaps even gets the nod over the slightly tauter Mercedes-Benz C-Class - particularly models that steer clear of big wheels and sport suspension.

The best A4 Avants are those with the optional adaptive dampers, which Audi calls Adaptive Comfort. Choose from comfort, sport or auto modes, or an individual setting that lets you tailor the firmness of the suspension, weight of the steering and response of the accelerator. This suspension will also cope better with the varying loads estates sometimes carry. It offers exemplary body control over most surfaces, even challenging ones at speed.

Handling is less thrilling than a BMW, but this is less of an issue with the Avant as it doesn’t quite have the ‘everyday sport’ focus of the saloon. Besides, it’s grippy, stable and viceless, with positive steering and a relative lack of body-roll helping keep things tidy. Quattro models have four-wheel drive for all-weather traction, although front-wheel-drive versions will still cope better than a rear-drive Mercedes or BMW in the snow.

The engine range includes a surprisingly capable 1.4-litre TFSI petrol, a sportier 2.0-litre TFSI and the vibrant but otherwise slightly soulless V6 turbo in the S4 Avant. Most buyers pick diesel. The 2.0-litre TDI is a known entity, and nicely refined on the move once you drive through a little bit of clatter under acceleration. But the pick of the diesels, if you can afford it, is the swift and exceedingly classy 3.0-litre V6 TDI. There’s not even a fuel economy penalty to pay – it’s worth the extra spend over the four-cylinder 2.0-litre if you’re able.

All Audi A4 Avants have a five-star Euro NCAP safety score, and all come with Audi Pre-Sense autonomous emergency braking. This will automatically slam the brakes on and do its best to avoid a frontal accident entirely at speeds of up to 50mph. At the very least, the system will mitigate the impact of the crash if you do hit something.

Pedestrians are kept safe by a pop-up bonnet, while those inside have six airbags, Isofix and a seatbelt monitoring system. An optional Driver Assistance pack includes extended adaptive cruise control, traffic-sign recognition and lane-keeping assist. It also has a collision-avoidance assistant, which feeds inputs into the steering to help you steer away from an impact.

You can, however, only pick Daytona Grey on S Line or S4 models, and Navarra Blue and Misano Red are restricted to the S4. All models will soon be offered with even pricier Audi Exclusive paint, whereby you can pay to pick any colour you want.

The base A4 Avant SE includes everything you’d want as standard, apart from sat nav and leather seats. It has xenon headlights, MMI with smartphone connectivity, Bluetooth, alloy wheels, posh three-zone climate control (so those in the rear can set their own temperature as well), a power tailgate, auto lights and wipers, plus cruise control with a speed limiter.

The A4 Avant has the same wheelbase as the A4 saloon, and is thus very similar inside. Indeed, it’s actually 1mm shorter than the saloon. Width is the same, at 1,842 mm, and overall height is up slightly, to 1434 mm. The S4 is a bit longer, because of its sportier body styling.

Audi offers some very efficient engines with the A4 Avant. The 1.4 TFSI will do more than 51 mpg combined, and the 2.0 TFSI isn’t far behind on 48.7 mpg in its most efficient form. But do note, choosing larger wheels will officially lower the fuel economy and raise the CO2 emissions. Choosing Quattro four-wheel drive also gives a 6mpg hit.

The latest A4 looks to be a reliable machine, particularly as it’s not affected by the ongoing diesel engine recall for VW Group 2.0-litre TDI motors (unlike its predecessor). You can choose from either variable or fixed-interval servicing. Because of the miles they cover, most A4 Avant drivers will be on variable-interval setups.

An Audi A4 Avant costs around £1,500 more than a saloon, for which you get more space, an electric tailgate and an electric load bay cover. Sport trim costs around £2,000 more than SE and is a useful upgrade given its standard sat nav, while S Line trim isn’t too great a jump over Sport. If you’re looking at higher-end 2.0-litre TDI engines, also be sure to check out the V6. It might not cost quite as much extra as you may think...