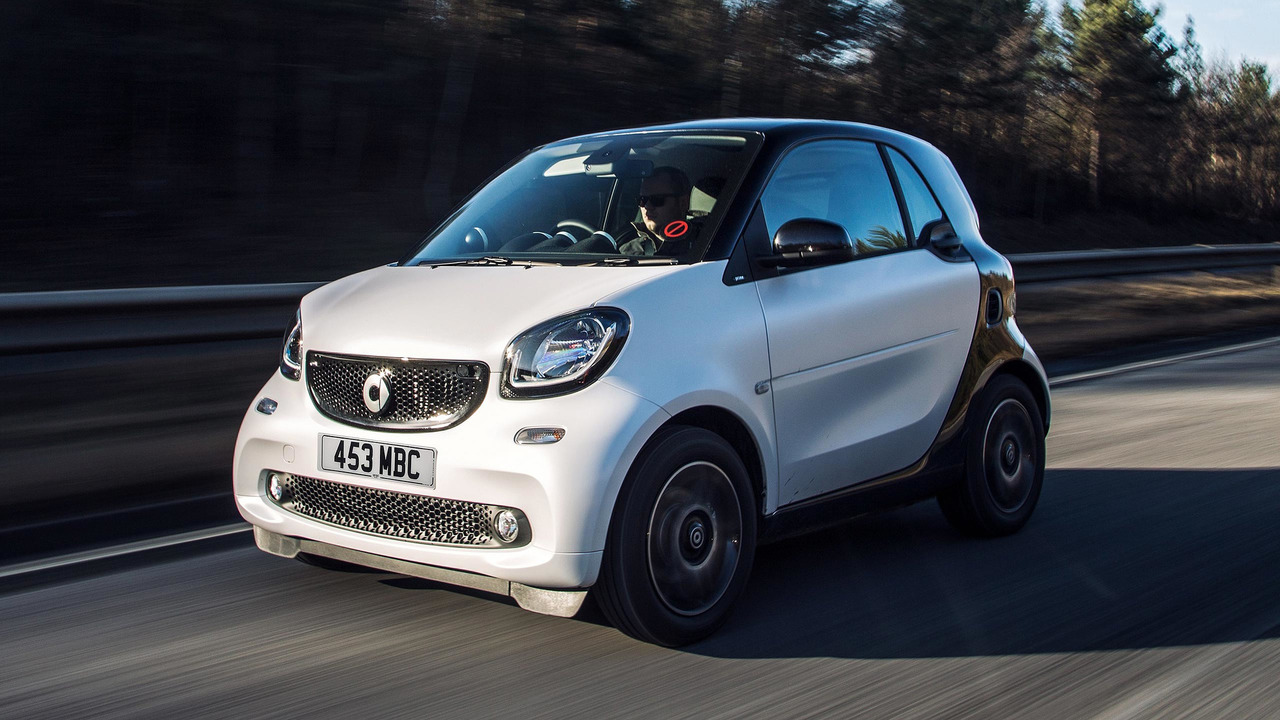 One of the most popular city cars in the European market.

Smart’s smallest city car has found itself incredibly popular in congested cities like Rome and Paris, but the UK has its fair share of fans, too. It’s the shortest car currently on sale, with the tightest turning circle, giving it the ability to parallel-park into spaces that no other car could even dream of. It’s also a cutely-styled, distinctive two-seater with good levels of technology and a surprisingly strong safety cell.

Did you know? The ForTwo has the tightest turning circle of any mass-produced car on sale in the UK, at 6.95 metres. Most modern main roads are over seven metres wide...

The ForTwo is a car that fulfils a very specific brief very well. It may only have two seats, but its boot is bigger than any of its larger rivals, and its ability to slot into roadside spaces that no other car could manage is uncanny. For nipping around town, doing the shopping run or just finding a parking space before everyone else, there’s nothing better. But it rides poorly compared to rivals, and interior quality doesn’t match the price tag.

You either like the snub-nosed ForTwo or you don’t. It’s short and tall, giving it a boxy, toylike look that proves good for headroom but bad for style. Smart has done well with it, though, managing to extract a certain Germanic cheekiness, especially in two-tone colour options. It’s like a cartoonish insect scrabbling around on tiny wheels, gobbling up lunch with its stretched mouth.

To maximise interior space for the size of the car, the ends are near-flat, with the wheels pushed out to the corners. Most of the boot is hidden behind the usually-contrasting paint of the safety cell, with the seats visible towards the rear ends of the doors, so it almost seems impossible to fit any sort of boot in at all, but such is the cleverness of the design.

It’s not as cute as a Fiat 500, though, and despite its advantages when it comes to parking, it’s hard to think about that when you’re looking at cars in a showroom. The ForTwo Cabrio soft-top version redresses the balance a little, but it’s not cheap. Neither is the regular car for that matter.

Drivers who really don’t need rear seats shouldn’t dismiss the ForTwo out of hand, assuming there’s no space inside. The vast majority of the car’s size is passenger area, and sitting there in either of the two seats you’d struggle to believe that you were in a car so small. The view backwards never loses its surprise, though, and being able to simply reach out and touch the rear windscreen is a uniquely amusing charm.

The seats themselves aren’t very supportive, built more as temporary perches for short and medium journeys than as luxury chairs. Their flat base and back surfaces are eventually found wanting, and they offer very little in the way of lateral support for cornering, either. Given that the seat height is higher than you’d think, that can mean an uncomfortable yawing across the seat around roundabouts.

Fitting a boot of 260 litres behind the seats is no mean feat, especially given that the engine is beneath the boot floor. That figure is measured to the roof, and there’s no bulkhead between the luggage and the passengers to stop items falling onto people under braking, so it’s not really as useful in practice as the technically slightly smaller boots in the likes of the Volkswagen Up and Suzuki Celerio. It does have luggage lashing hooks, though, which is useful. For longer items, the passenger seat folds flat.

One feature no rival can match is the turning circle, which is better even than that of a London taxi. Having the engine at the back frees up loads of space beneath the bonnet not just for the fluid tanks, but for the front wheels to turn into. That lets them turn far more than any competitor car; they actually turn the same amount as in the longer ForFour and the Renault Twingo which shares the ForFour's lengthened platform, but the ForTwo's shorter wheelbase means a tighter turn for the same amount of angle at the front wheels and the ability to perform near-impossible parking manoeuvres. As city cars go, they don’t come more useful on congested streets than this.

It’s easy to believe that the ForTwo, as small as it is, must have no equipment to speak of as standard, but the truth is far from that. It has basics like electric windows, remote central locking and a multi-function trip computer, but it also goes as far as climate control, cruise control, a USB port and AUX jack combination, Bluetooth wireless connectivity and steering wheel-mounted audio controls. Oddly, there’s no rev counter.

Upgrade to higher models and Smart makes available technology like a UV-ray shielding panoramic sunroof, the missing rev counter, heated seats, an optional twin-clutch automatic gearbox and much more. The Premium option pack, which is available across all the trim grades, adds gadgets like rear parking sensors, which are as useless as it gets given how short the car is.

More usefully, the pack adds height adjustment for the wheel and driver’s seat, and a seven-inch capacitive touch-screen through which the interface can deploy Android-compatible Mirrorlink software to allow access to certain apps via the main screen. It also comes with navigation, complete with live traffic information for the first three years. At most, though, the feeble stereo is limited to two mid-range woofers and two tweeters.

Of the two engines, the larger, non-turbocharged one feels more responsive initially, but it leaves a lot to be desired for outright speed. It’s wheezy when stretched, and it has to be worked hard so often that it just feels out of its depth unless it’s confined to traffic-snarled city streets.

The smaller, turbocharged unit has much more mid-range torque to offset its wooly, delayed responses. It’s still far from fast but it’s much more usable than the cheaper engine. It’s at its best through 3-4000rpm, where it produces the most meaningful shove without getting breathless. Previous Smarts have had rather surge-prone, jerky sequential or automatic gearboxes with no clutch pedal and no manual alternative, but this latest generation can be had as a normal manual.

This is not a wide car, but having wheels at the very corners does make it feel slightly bigger than it is. Even so, it doesn’t handle with any real panache and the lack of seat bolstering means a driver is fighting to stay in his or her seat long before the grip runs out. The short wheelbase means a quick corner turn-in, but it also makes the Smart inherently less stable through bumpy sections than a longer car.

Key to the Smart’s construction is what it calls its ‘Tridion’ safety cell; a simple cage that forms the passenger area. Actually, nearly every car has a 'safety cell', but picking it out in a different colour was Smart's way, when the original Smart was launched in 1998, of advertising that a tiny car can still be a strong car. Anyway, it is indeed very strong, with various crash tests involving smashing the ForTwo into immovable objects (or much larger Mercedes-Benz saloons) at high speed showing how little the structure bends. The inescapable other side to that coin is that the zones fore and aft of the passenger cabin need to absorb much more force, and there simply isn’t enough car there to form an effective crumple zone.

Euro NCAP rates the ForTwo as a four out of five, and it gets very average scores in every category when compared to most other city cars. It does have Brake Assist, which applies full braking power if it thinks the driver is panic-braking for a hazard, and crosswind assist (it nudges the appropriate brake to correct the direction if the Smart is blown about), which is occasionally intrusive but undeniably useful for a car of this height with such a short wheelbase and the bulk of its weight on the rear wheels.

Available as options on higher-spec cars, there are automatic windscreen wipers and headlights, and a rear-view camera to help overcome the obvious blind spots towards the car’s rear three-quarters.

There are two separate charts for the ForTwo’s colour options. The first is for the body panels and the second covers the painted Tridion cell. For no extra cost buyers can choose black, red or white body panels, all in a flat finish. Black-Yellow, which is actually just metallic yellow, is one of the £295 options here, alongside Cool Silver metallic, Hazel Brown metallic, Lava Orange metallic, Midnight Blue metallic and two matt choices: Moon White and Titania Grey, both of which cost £395.

Starting with Passion trim, alloy wheels are standard in a plain, 15in guise. There’s leather trim for the steering wheel and gear knob. Something Smart refers to as a ‘soft-look’ roof joins either black and grey or black and orange fabric seats. The dashboard and door panel inserts are trimmed with either black or orange cloth.

It’s deeply impressive to see the likes of cruise control, climate control and a full suite of connectivity options on a car of this size as standard, but then the ForTwo isn’t exactly cheap.

Prime Sport goes up an inch for its alloy wheel size, adopting an aggressive multi-Y-spoke design and 20mm wider, 205-section rear tyres. It sits on 10mm lower suspension and sports a chrome-plated exhaust trim piece. Finally, Brabus Sport goes up to 17in wheels at the back, adds a host of Brabus aesthetic upgrades and a mock rear diffuser. Brabus is a German tuning company with official Smart approval.

The ForTwo is the smallest mass-produced car you can buy in the UK today. Just 2.7 metres long, it occupies much less road space than a normal car and can fit into much smaller spaces, but owners should be aware that it’s illegal to park it perpendicular to the kerb where roadside bays are marked, as it overhangs the bay. It’s also illegal to do the same at night even without marked bays, because oncoming traffic can’t see its reflectors.

Driven with care, either engine should be capable of breaking into the 60s for miles per gallon. A kerb weight of just 880kg for the turbocharged version helps with that, as well as an engine stop-start system and a transmission geared for urban efficiency. On faster roads the five ratios aren’t enough to keep engine revs down, so fuel economy suffers.

Insurance isn’t cheap, both because replacement parts can be expensive and because there’s a risk of a write-off if the Tridion cell is damaged. Tyres and consumables are reasonably priced, though, apart from the more expensive rears on the Brabus model.

Smart’s parent company, Mercedes, isn’t outstanding for reliability as a whole, which doesn’t necessarily bode well for the ForTwo. Electrical glitches are the main bugbear. The Smart is simpler, though, and has a fixed service that is carried out every year, priced between a typical minor and major service for a rival car.

Smart won’t win any fans with its pricing structure. The cheapest manual Passion model is about as expensive as a range-topping Skoda Citigo, and while it has one or two features that the Skoda doesn’t, the reverse is also true. Such as, well, rear seats.

Brabus models only come with the more powerful engine and start at £14,055. Adding the twin-clutch transmission costs £995. The Premium and Premium Plus packs are yours for £845 and £1345 respectively, with the latter containing all the benefits of the former while adding some extras.