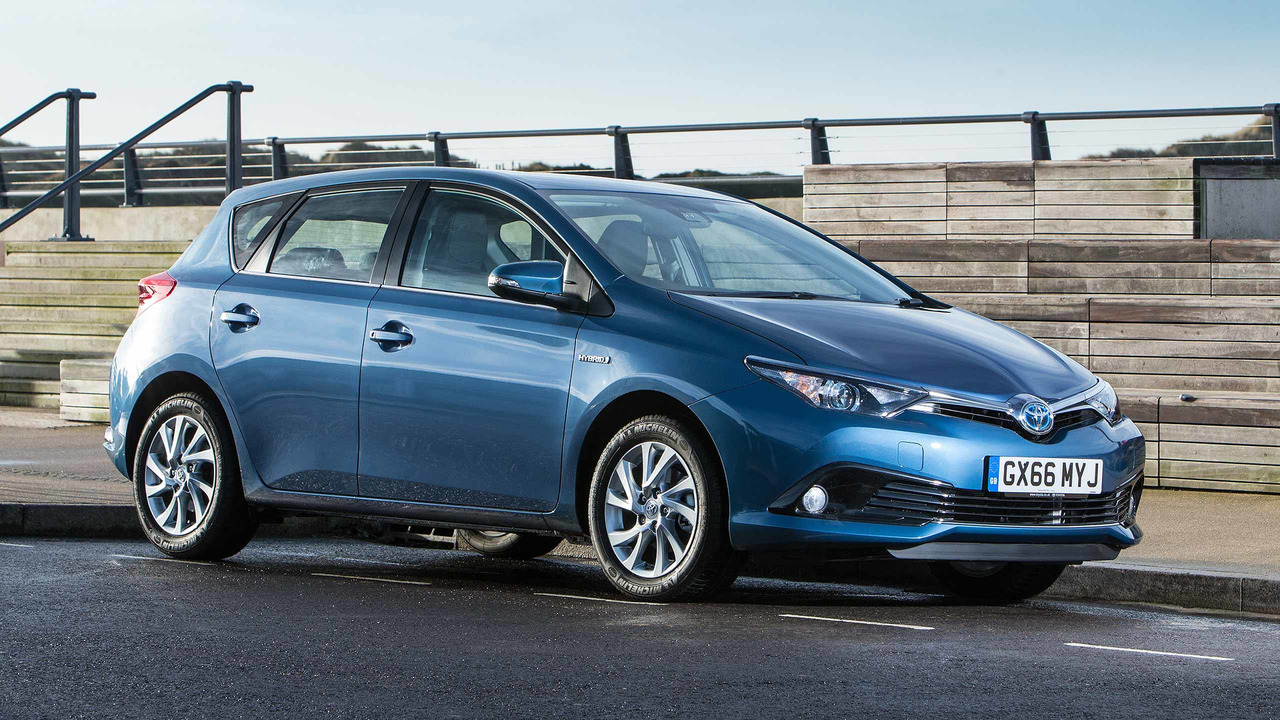 When you want a pretty Prius, the Auris comes into its own.

Toyota is known for its hybrid technology and good reliability, and arguably the most recalled petrol-electric car in the Japanese company’s line-up is the Prius. However, while Toyota’s hybrid trailblazer can be divisive when it comes to looks, the Auris puts all that technology into a more conservative-looking series of family friendly five-door hatchbacks and estates.

Did you know? The Auris is British-built at Toyota’s factory in Burnaston, near Derby, and the car is the best-selling hybrid model in Europe.

A choice of two petrol and two diesel engines, a petrol-electric hybrid, two body styles, as well as five trim levels mean there should be an Auris to suit most tastes. Conservative in both looks and driving style, Toyota’s family hatchback and estate enjoy a fuss-free demeanour and go about their business with minimum effort. If efficiency, practicality and reliability are among the strengths you prioritise, the Auris is a very sensible choice.

One of the most offensive criticisms you could level at the exterior of the Toyota Auris is that it has been designed to be the least offensive to prospective buyers. While there are lots of creases and sharp lines, it could still be mistaken for selected Japanese and South Korean rivals.

But inoffensive is probably the way most Auris drivers like it. And the Corolla buyers before them: Toyota’s recent family hatch offerings have rarely been exciting to look at. A 2015 refresh brought a sharper front end, and while the Touring Sports estate’s extra carrying capacity has been well-integrated, there are better-looking family estate cars on the market.

A comfortable and nice place to be are comments which rightly describe the interior of the Auris. But there are pockets of style, too. The main instrument dials are deep set in ‘tubes’ similar to selected Volkswagen products, and a mix of both softer-grained plastics and leather touch points ramp up the feelings of quality. Height adjustment for the driver’s seat is standard on all models, and, with the tilt and reach-adjustable steering wheel, there should be a driving position to suit most.

A seven-inch colour touchscreen is standard on all models bar the entry-level Active, and presents the infotainment in a clear, high resolution fashion even if the graphics on Toyota’s standard system appear dated. All versions get a 4.2-inch multifunction TFT display ahead of the driver, which is colour on all models bar the 1.33 VVT-i Active hatchback and Touring Sports.

Being available in five-door hatchback and estate body styles immediately aids the Toyota Auris’ practicality, and both versions offer a more luggage space with the rear seats in place than most rivals. All models have a 60:40 split rear seat which also reclines. The Touring Sports models not only offer additional carrying capacity over the hatchback, but also a two-way tonneau cover to keep valuables out of sight as well as a partition net.

Even more usefully, Touring Sports variants are also fitted with Toyota’s ‘Easy Flat’ system, which allows the rear seats to be folded at the touch of a button. That makes it even easier to access the truly cavernous 1,658 litres of luggage space.

A decent level of specification is standard across the Auris range, but you’ll need to forego the entry-level Active cars if you want items such as cruise control, DAB, and – with the exception of the hybrid – a colour TFT display between the dials. Air conditioning, electric front windows, LED daytime running and rear lights, and steering wheel-mounted audio controls are standard, though.

Move up to Icon, and a seven-inch colour touchscreen with Toyota’s ‘Touch 2’ infotainment system becomes part of the specification, along with Bluetooth and USB connectivity, an extra pair of speakers, as well as a rear view camera. Business Edition cars build on this with the ‘Touch 2 with Go’ system which includes satellite navigation, three years of map updates, as well as access to Google Local Search.

The Auris focuses on a relaxing driving style, rather than an especially dynamic one. Recent upgrades to the steering and suspension have made the car more enjoyable to drive, but if its dynamics you’re after, the Ford Focus and Volkswagen Golf are still much better bets. The chassis has been tuned for comfort, and it’s here the Auris is better, being refined on the move and soaking up road imperfections well.

All hybrid versions of the Auris use a continuously variable transmission (CVT) and, as with most cars with CVT, a noisy and rather unpleasant drone is obvious under hard acceleration which spoils its impressive refinement. The regenerative brakes of the hybrid feed otherwise wasted kinetic energy back in the battery, too, as well as gently slowing the car when driving downhill.

A five-star Euro NCAP rating and a 92 per cent adult occupant safety score was impressive enough when the current Toyota Auris was tested back in 2013, but the Japanese family hatch now has even more weapons in its safety arsenal.

Every model has a high level of standard active and passive safety features, while all cars in the Auris range with the exception of entry-level versions have the Toyota Safety Sense package as standard. A £450 option on Active models, it includes autonomous emergency braking, lane departure, pre-crash, and road sign warning systems.

In keeping with its sombre image, the Auris colour palette is a largely muted affair. Eleven colours are available in total: two pearlescent finishes – Pearl White and the new-for-2017 Tokyo Red, also the most vibrant Auris shade – seven metallics and two solid colours, Pure White and Lunar Shadow, a dark blue. Of the metallic finishes, three of them are shades of grey or black, while Platinum Bronze and Tyrol Silver offer something a little lighter.

The Auris range spans five trim levels, and mirrors other models in Toyota’s line-up. Active models kick off the Auris family and offer petrol and hybrid petrol versions – there is no diesel at this price point. A good level of kit is standard, but you do miss out on features such as rear electric windows, and automatic headlamps and wipers.

Icon cars add visual fripperies such as 16-inch alloy wheels and front fog lamps, while inside there’s a leather-trimmed steering wheel, seven-inch touchscreen with Toyota’s ‘Touch 2’ multimedia system with the addition of DAB radio. Business Edition is, as its name suggests, aimed at fleet users, with cruise control, heated seats, and satellite navigation as standard for added usefulness.

Design trim turns the Auris into a bit of a looker, with 17-inch machined-face alloy wheels as standard, along with rear privacy glass. Inside, alcantara sports seats lift the cabin, while an optional ‘Skyview’ panoramic roof and chrome add even more visual impact. As expected from a range-topping model, the Excel is the most luxuriously-equipped Auris with dual-zone automatic air conditioning, front and rear parking sensors, satellite navigation and voice recognition-enabled multimedia system as well as Intelligent Park Assist all as standard.

The Auris is fairly standard when it comes to family hatchback dimensions, but it is a little longer – and narrower – than a Volkswagen Golf. It’s a similar story for the Touring Sports versions, too, 28mm longer than its venerable German rival.

The hybrid versions of the Auris are the ones to go for if you want reduced tax costs thanks to the lower emissions, which beat even those of the diesel variants. Automatic models also emit less CO2 than their manual counterparts, and when it comes to road tax, the whole Auris range sits between bands A and D.

The 1.4 D-4D diesel is the most economical on paper at 80.7mpg, but this is only available in Business Edition specification. Otherwise, go for the petrol-electric hybrid, which is only a couple of miles per gallon less efficient, although depending on use, you may find it difficult to match Toyota’s official economy figures. It’s also worth noting that the regenerative braking system of the hybrid models also lowers maintenance costs by reducing wear on the brakes themselves.

With lots of safety equipment as standard, insurance costs for the Auris are commendable, and start in group 8E, rising to 15E for the 1.2-litre turbocharged model.

Every Toyota Auris comes with a 5-year/100,000-mile warranty, while fixed price service plans and genuine part repairs mean there are no variable cost traps for the unwary. Toyota’s family hatchback also bears out the company’s famous reputation for reliability, with no major faults reported.

From £19,995, the Auris Icon is the version to buy if you want value. Offering a decent level of visual and practical equipment over the entry-level Active, the Icon comes in petrol, diesel, and hybrid flavours. The cheapest and lowest-powered Icon model is £3,500 less expensive.

Hybrid models generally cost around £2,400 more than their 1.2-litre turbocharged petrol counterparts spec-for-spec, but offer lower tax costs thanks to their lower emissions. They also afford 4 to 7 per cent lower Benefit in Kind rates, too. While the hybrid models are CVT-only, automatic versions of the 1.2-litre petrol cars add £1,000 to the price in all instances.