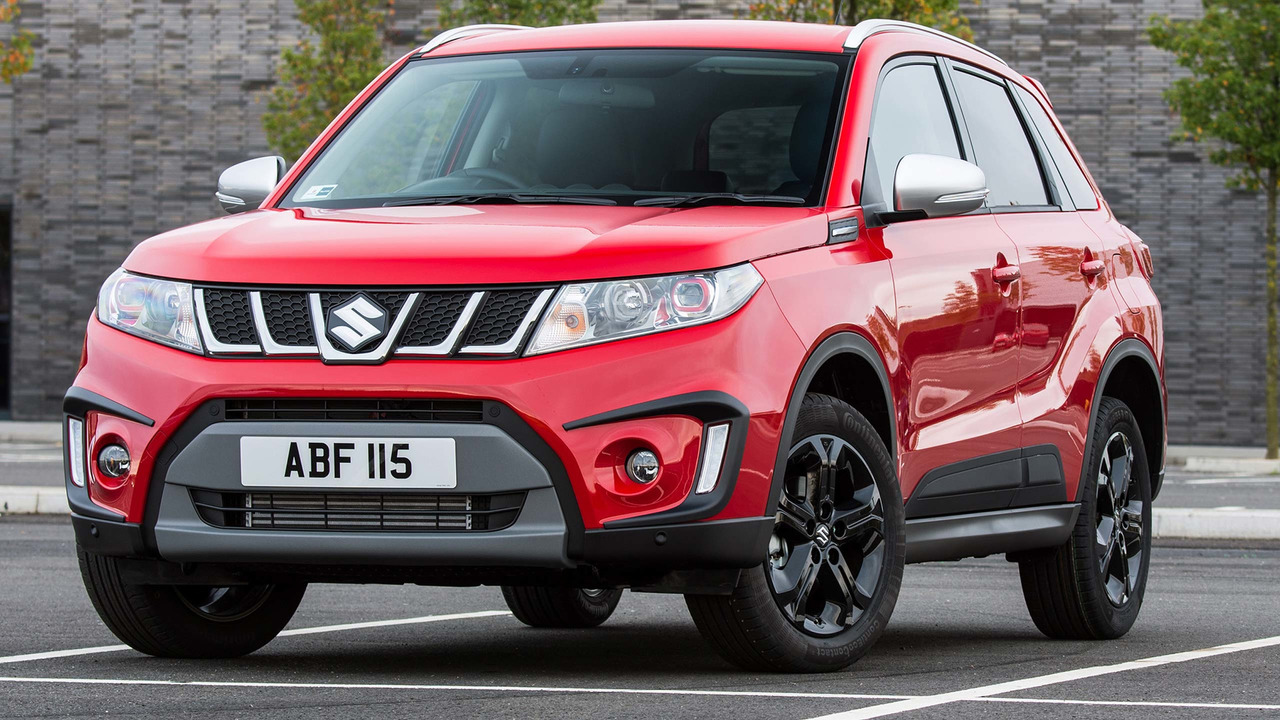 The Suzuki Vitara has a long history, but it has been reinvented for an age where extensive off-road ability simply isn’t needed anymore. As such, the Vitara is now biased much more towards on-road manners and family-friendly space. It follows a familiar high-riding but compact design ethos, but adds a certain unique charm that some competitors are lacking. A simple range makes it easy to choose the right model, but all present unusually good value for money.

Did you know? In North America, the first of the four Vitara generations was known as the Sidekick, which also had a long-wheelbase version.

There are many praiseworthy on-paper qualities you can highlight, but the Vitara has an important extra feature: it’s extremely likeable. From its immediately comfortable driving position and positive gear change action to its impressive engine flexibility and good ride quality, it simply gets on with the job with a smile on its face. It’s a very competent car, yes, but it’s also a pleasure to live with.

There’s something stoic and sensible about the Vitara’s lines. It’s upright, makes no pretence of sportiness and comes across as an handiman who’s not afraid to get his hands dirty rather than as a precious SUV supermodel. The upper grille is bold, with almost-straight lines kicking up at the point they meet the headlights. It’s complemented by the lower grille, which also uses straight lines to good effect.

The rising waist line that kicks up over the rear wheel arches is less effective. It’s too low at the front and can make the car look top-heavy at times.

SZ5 models also have pale blue detailing in their headlights, denoting the LED technology and acting as a subtle extra design cue. The Vitara S takes the same theme but switches the blue for a cherry red, which looks just as good. It’s such a simple feature and looks so smart that it’s a wonder more companies don’t do it.

Aside from a general lack of lumbar support, the seats are very fit for purpose. The front seat back side bolsters give ample support, while the bases are less firm than German rivals but generally firmer than those from the French.

The driving position has a good amount of adjustment in it, including for reach in the steering column. The seat bases are short enough to accommodate drivers with shorter-than-average thighs, but this does compromise under-leg support for taller people. Nonetheless, the first impressions of sitting in the main seat are very good, with a good ratio between the seat height, pedal positions, steering wheel and gear lever.

Ride quality is a tale of two halves, with a generally fine outcome. In general driving it’s stable, balanced and comfortable, only falling down on sharper bumps and broken surfaces, where vibrations and thumps can come through harshly via the seat and steering wheel. In fairness, though, you need so spend a lot more to see much improvement in any potential rival.

The height of the cabin allows for higher seats, which creates the impression of more legroom without having to add length. But the Vitara is still a compact car whether it looks it or not, and the boot is a tiny bit smaller than, for example, a SEAT Leon’s or a Nissan Qashqai’s.

The rear seats don’t fold flat, but the official figures for boot space are deceiving, as they only account for loads up to the window line. Over 1100 litres are available to the roof, which is a more standard measurement to take.

Four-wheel drive is an option on both petrol and diesel powertrains. It’s a torque-on-demand system that sends power to the rear wheels when the fronts lose grip, and while the traction control system actually reduces its effectiveness, it’s a useful addition for towing trailers across fields and the like. It can be locked into an active mode, and there is also an electronic centre differential lock that can help the car pull itself through trickier off-road patches.

Suzuki has spared little expense in the connectivity department. Basic models have media playback options for CDs, MP3 players, AM, FM and DAB radio plus Bluetooth connectivity, although the audio quality at the other end of the line is often average at best when making a hands-free call.

Climate control, cruise control and LED daytime running lights are all features of the cheapest model. The middle of the three main grades adds sat-nav via the large screen on the centre console. The screen is a neat design with bright colours and clear graphics, and to the side of it there are capacitive touch-buttons to access certain menus and modes.

The most powerful engine, a 1.4-litre turbo, is only available for now in the standalone Vitara S model, but with 162lb ft of torque and four-wheel drive it gets away from the line smartly. Pushing the car onwards with impressive in-gear acceleration and a characterful sound, it’s the most fun engine, but there’s a different appeal in the non-tubocharged 1.6 petrol.

It’s as sweet as a nut. The smooth and free-revving unit enjoys being worked hard and rewards with good acceleration right up to motorway speeds, but it’s also smooth and, when handled the right way, surprisingly efficient. It’s more responsive than the 1.4 BoosterJet and is crisper in general use around town.

Arguably the diesel is the best all-rounder and offers plenty of overtaking punch. Borrowed from Fiat, it’s not a quiet engine and isn’t particularly well soundproofed in the Vitara, but it offers a great overall package that seems to boost the overall sense of competence and worthiness of the whole car. The problem is its price; it’s much more expensive than the 1.6 petrol.

Like most manufacturers, Suzuki has standardised the bulk of its safety technology right across the range. Anti-lock brakes, stability control, traction control and hill-hold control are all among the simpler systems installed on all Vitaras, although on four-wheel drive models the traction control is too eager to cut in when the drivetrain would do a better job of managing forward motion if left to its own devices.

Impressively, as well as six airbags at the front and sides, there is a driver’s knee airbag. It’s a feature many cars that cost much more than the Vitara lack, and overall Euro NCAP has rewarded Suzuki for its efforts with a five-star rating.

Hill descent control is an option on the SZ-T and SZ5 models, but it’s a niche feature for a car like this. It’s tough to imagine how it would be regularly useful enough to be worth adding. Only SZ5 models come with hazard warning lights that automatically flash after an emergency stop, and the same model also comes with all-speed Radar Brake Support, which warns of potential collisions but is a little too eager to sound its horribly piercing alarm.

There are two sub-ranges for colours; one for single-tone cars and another for two-tone. The single-tone options are a bit disappointing overall, and the stunning Atlantis Turquoise Pearl Metallic, which looks fabulous in the flesh, can’t do enough on its own to offset the unimaginative white, black, silver and grey alternatives. Galactic Grey is the next best of the five.

The two-tone choices are better. All five come with a Black Pearl metallic roof, and only Atlantis Turquoise and Galactic Grey, the two best single-tone metallic colours, are carried over. Alongside them are flat Bright Red, metallic Horizon Orange and the unflattering Savannah Ivory, also a metallic. It’s too drab in anything but bright, glowing sunshine.

As well as the three core models of SZ4, SZ-T and SZ5, there is the special edition Vitara Kuro and the sportier, high-spec Vitara S. The SZ4 is already comfortable thanks to climate control, cruise control and a suite of connectivity options, but SZ-T is more desirable thanks to the additions of sat-nav, a neat colour touchscreen, a reversing camera and larger alloy wheels.

Upgrading to SZ5 involves a big price jump but it’s worth it for the superb LED projector headlights, panoramic sunroof and automation for the headlights and windscreen wipers. Its door mirrors also fold electrically and the cruise control is upgraded to an adaptive system.

The Kuro is based on SZ-T spec but has a heavily black design theme, with special black alloy wheels, a black spoiler, black body trim and a carbon effect clock in the dashboard. The body is painted either white or black, only. At the top of the range the Vitara S takes SZ5 spec but gets a unique upper grille and a different interior. The suede seats, leather steering wheel and leather gear lever trim all have contrasting red stitching, while there are cherry red surrounds for the air vents and dials.

As a compact SUV, the Vitara is a manageable 4175mm long, making it potentially easier to parallel-park than some hatchbacks. Width of 1775mm isn’t too excessive, either. Height of 1610mm reflects its tall on-road stance, but is still low enough to get under most city height restrictions.

The Vitara offers some pleasant surprises when it comes to fuel economy. The light-feeling 1.6 petrol can easily return over 55mpg on a motorway run in real-world conditions, and its overall average, even without trying too hard to be careful, tends to hover around the 40mpg mark. With care that rises to 45mpg.

On paper the 1.4 BoosterJet engine does slightly better, but not in practice. The torque feels so good to use that you tend to accelerate harder all the time without really realising it, lowering your overall efficiency.

The clear running costs champion is the diesel, which, driven at 60-65mph along the motorway can deliver some excellent figures Around town the difference is much smaller, and in truth the real urban fuel economy is only a few miles per gallon better than the petrol.

Suzuki doesn’t boast about its reliability very often, but it usually places quite highly in relevant surveys. This generation platform has had one or two issues with electronic calibrations of certain systems, though, including one relating to a jerk from the automatic gearbox as it shifts from second to first gear. The suspension dampers are also known to leak on some cars, but they should be replaced under warranty.

Suzuki is offering brilliant value for money in the Vitara, with caveats. The SZ4 costs just £14,999 and comes with the 1.6-litre petrol engine only, while the SZ-T looks like a bargain at £16,749, again for the petrol. Even the SZ5, which asks a further £2500 and starts at £19,249 is tempting when you take into account the sort of kit it brings with it as standard. For year-round driving in all weathers the LED headlights are worth spending extra for.

The caveats are as follows. The diesel engine costs £1500 more on the SZ-T with front-wheel drive, and £3300 more in SZ5 trim, because it only comes with AllGrip four-wheel drive. Add the dual-clutch automatic gearbox as well and the increase is £4650. The diesel looks like really poor value unless you’re likely to spend 20,000 miles per year on the motorway.