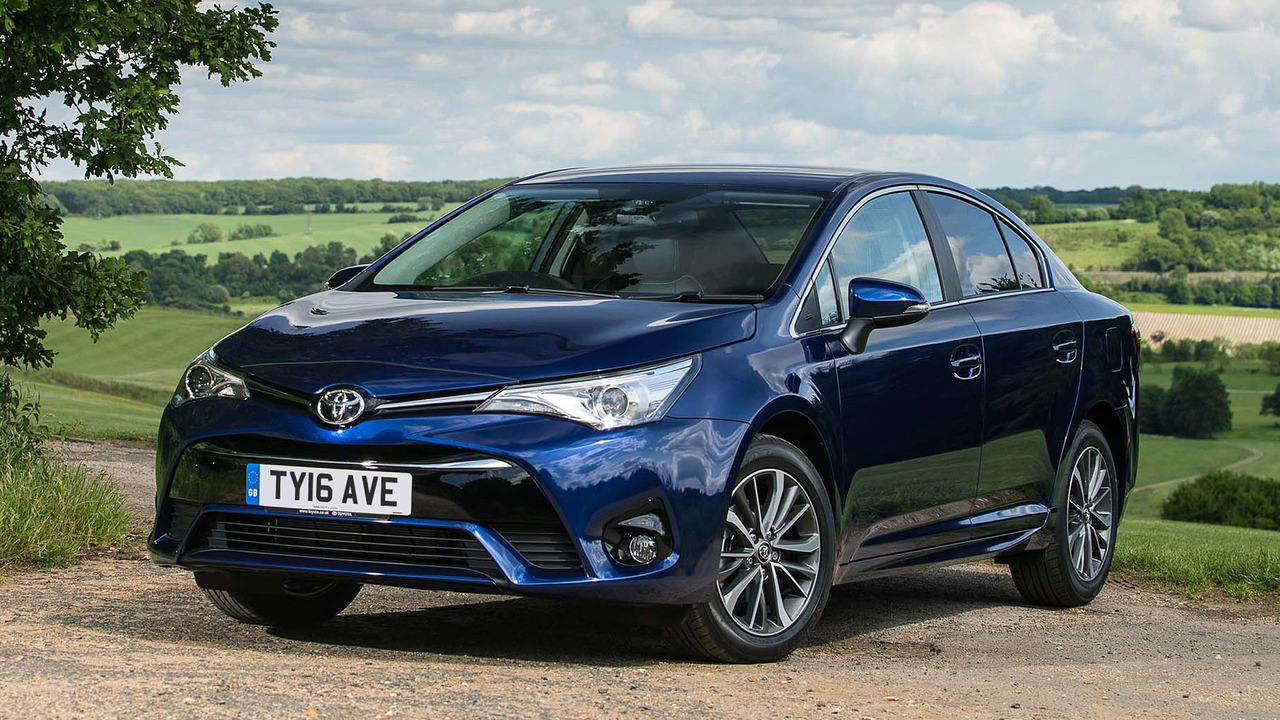 Although sales are slipping in the UK for cars of this size and type, the Toyota Avensis is one of the most worthy on the market for those drivers looking for the essentials. It’s not designed to appeal to the heart as much as it is to the head, with lots of space for luggage and passengers, ample useful technology and intelligent technology. It’s built to offer fuss-free everyday transport for families and business users.

Did you know? Reliable used Avensis models often appear in the classifieds with well over 200,000 miles on the clock.

The Avensis is built to do a job rather than act as a driveway ornament, despite Toyota’s striking styling (that doesn’t necessarily suit the car especially well). By focusing on high-quality seats, suspension and infotainment technology, the company has built a superb place to spend extended periods of time. Families will love the spacious cabin, drivers will appreciate the smooth engines and the comfortable ride is good for everyone.

It’s ageing, lacks a premium badge, can’t compete with German brands for desirability and little details such as the interior door handles are inexplicably poor quality versus the rest of the car, but the Avensis is an excellent and somewhat underrated everyday companion.

The danger of having such a striking, angular, distinctive brand styling theme is that such an extreme look won’t suit every car in the range. Imagine Aston Martin building a supermini of its own, with the famously good-looking sports car styling and that grille, but on 15in wheels with a hatchback boot. It just wouldn’t work.

Toyota’s Yaris and Aygo look great with their sharp, dynamic lines, but the effect isn’t ideal for the Avensis. It’s a taller, more sensible car that tends to look narrower than it is, and smoother, fuller, more rounded styling would suit it better. At the time, the 2003-2014 models were called boring and too conservative, but today they look OK while the current model seems a bit confused over its own identity. It feels as though the quiet guy from IT has suddenly appeared wearing a classic ninja outfit and bandana.

Higher trim grades come with LED headlights, which add an upmarket detail to the looks, and the larger alloy wheel options on certain versions also help to give a little more overall cohesion. The entry-level car with its steel wheels and plastic wheel trims is one to avoid if style is important, and the Touring Sports estate is arguably the better-looking body style.

Toyota has clearly spent a big chunk of the budget on the suspension, which is unusually supple at low speeds, managing speed bumps and manhole covers with grace, particularly on wheels no larger than the 17in fitment. The 18in ones may look great on Design and Excel models, but they do introduce an element of harshness to some potholes. On smaller wheels the Avensis is incredibly comfortable.

The seats deserve thanks, as well. They are shaped for good back and thigh support, and padded to be all-day comfortable. Some versions have more adjustment than others, but every Avensis has a strong standard level of comfort.

The interior is on the plan side, but it has a certain classiness at the same time. There is an elegance to its simplicity and logic. It’s not likely to win any cutting-edge design awards, but nor is anyone likely to be confused or frustrated by it. The one disappointment in the cabin is the door handles, which are made from a plastic that creaks cheaply and even twists slightly as you grip it to open the door. It’s a bizarre oversight.

Naturally, the saloon is less practical than the Touring Sports estate, but even so, its boot is long and wide; more than big enough for short family trips away without buggies or big prams. The estate is better suited to families with young children, with its large tailgate opening upwards to reveal a broad aperture through which larger accessories or even the occasional large household appliance will drop into without breaking a sweat. Neither has as much boot space as a Skoda Octavia, but they have enough.

Cupholders that can swallow broad cups and bottles, plastics that can take a reasonable beating before scratching badly and one-touch electric windows all round are other standard practicality boosts for the Avensis. There’s no transmission tunnel, either, making life much better for the middle rear passenger.

The range of technology on the Avensis is impressive, even in the mid-range. It’s not the quantity, necessarily, but the intelligence involved at the selection stage. Everything on the Avensis is a genuinely useful feature that drivers really will use. Every car has at least six speakers, AM and FM radio, a USB port and AUX jack, plus air conditioning, an auto-dimming rear-view mirror, cruise control, one-touch electric windows, audio controls on the steering wheel and much more.

Step up just one trim grade from entry level and you’re greeted with an eight-inch infotainment display with Toyota’s Touch 2 software and satellite navigation. Not only that, it also has DAB radio, WiFi connectivity, dual-zone climate control, a reversing camera and power-adjustable lumbar support for the driver.

It’s a list of luxuries that doesn’t change much until the very top trim grade, which has 10 speakers, voice recognition, electrically-adjustable front seats with memory function and heating. Half-leather seats are introduced in the middle of the range, upgrading to full leather at the top.

The Avensis is not built for speed or dynamics. In fairness, Toyota’s latest upgrades to the stiffness of the bodyshell and the quality of the damping make the car stable and composed through turns, even on rough surfaces. It’s just not exciting in the least while it’s doing it. The steering is accurate and it does have a little more feedback than previous models made do with, but it’s not as incisive as a BMW 3 Series’.

Of the three engines, the lower-powered 1.6-litre diesel is underpowered for a car like this. It has more torque than the 1.8-litre petrol, but the latter’s smoothness and more linear responses make up for it. It’s the best choice for a life of predominantly short journeys. The 2.0-litre diesel, borrowed, like the 1.6, from BMW, is easily best all-rounder. It’s most at home on the motorway and has good, strong pull through the gears, picking up cleanly from impressively low revs. It’s far from fast, but few drivers will really need more.

Right from the cheapest model, safety has been made a prime concern. Admirably, the Pre-Collision System is standard even on the base car, using a camera and laser to detect and alert to possible collisions, hitting the brakes if the driver doesn’t. On a simpler but equally welcome note, a temporary spare wheel is standard.

In the middle and high parts of the range there’s a mighty complement of active technologies keeping the car out of trouble. As well as the range-wide ABS, Brake Assist, Hill-Start Assist and advanced stability control, there are brighter LED headlights, cornering lights, Lane Departure Alert and Road Sign Assist to help identify speed limits.

Unsurprisingly for a car that has two trim levels featuring the word ‘business’, the range of colours is muted, sober and professional. Pure White, the free option, does the styling no favours at all, more or less forcing buyers to upgrade. Tyrol Silver is one of seven metallic shades covering Aspen Grey, Decuma Grey, Eclipse Black, Platinum Bronze, Deep Titanium and Orion Blue. Toyota really knows how to apply paint, though, and the darker colours look spectacular in direct sunlight. Deep Titanium has a dual metallic fleck that looks brilliant.

On top of the metallics there are two pearlescent shades. Pearl White is best avoided on this car, but Tokyo Red works well with the Avensis’ larger wheel options.

There are five trim levels, starting with Active. It looks cheap because it rides on steel wheels, but it has plenty of useful standard equipment. It barely makes up any of the sales volume in the UK, though, because the styling doesn’t fit what buyers of this kind of car want.

Much better is Business Edition, which adds a huge amount of technology, plus 17in wheels to improve the look. It feels a lot more like a premium product than the Active thanks to the Toyota Touch 2 interface with navigation.

Excel is the range-topper, with full leather seats and lots of luxury. The front seats are heated and electrically adjustable, it gets 18in alloy wheels like the Design model and it has adaptive front LED headlights that turn with you as you negotiate corners, giving you greater visibility down the road. Every trim level is well-stocked, but from Business Edition upwards the Avensis stands out.

The Avensis is about par for length, perhaps a little narrower than average, and the estate doesn’t add much to the overall length. The towing weight seems a bit on the light side, though: be warned, caravanners.

On a steady motorway journey the diesel Avensis can break the 60mpg barrier, potentially doing so even including getting to and from the M-road itself. It needs to be driven with care and plenty of forward planning to get the best results, but they are possible. The smaller 1.6-litre diesel does no better because it needs to work harder to keep the same pace.

The petrol engine is smooth; one of the most refined petrol engines on sale today. What it lacks in torque it makes up for in surprising efficiency, clocking up a 40mpg average easily. On longer trips it can get beyond 50mpg. The Avensis is almost never driven by boy racers but its insurance prices are nevertheless hiked because it does suffer from being a popular car with sales reps, who are more prone to driving fast and not necessarily paying enough attention.

Toyota’s reliability is always very good, mixing it with sister company Lexus and Honda for the outright global best in that regard. No car model is completely free of faults but the Avensis has a good record compared to rival cars, with many of the best looked-after examples passing 250,000 miles in the hands of dedicated and loving owners.

To move to Business Edition Plus involves an extra £1800, while the cheapest Excel is £25,705. These prices are all for saloons, and choosing the more practical Touring Sports estate attracts an uncommonly hefty £1805 premium.