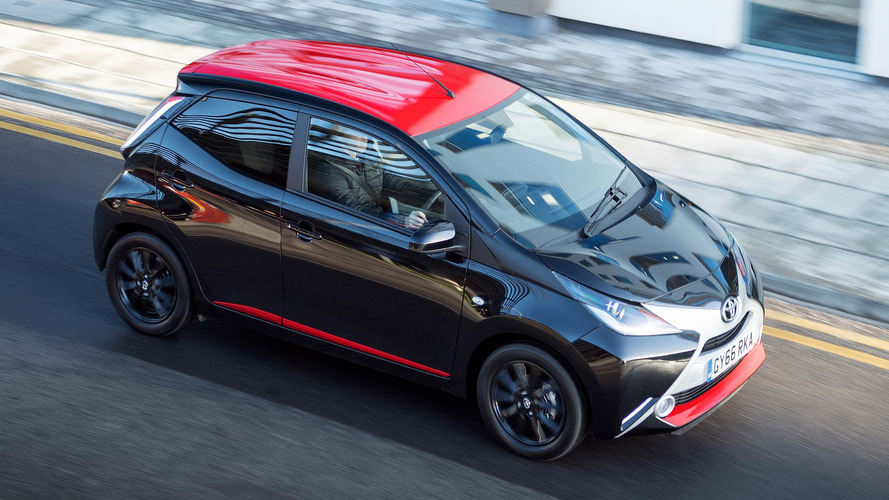 Unique looking, but up against stiff opposition.

The Aygo is Toyota’s smallest car since the demise of the iQ. It’s part of a platform-sharing arrangement with Peugeot and Citroen, so uses many of the same parts under the skin, but it doesn’t hold back in the styling department. Designed for urban and suburban life, the Aygo is a fun-looking and easy to drive city car with its eyes on tech-savvy younger drivers.

Did you know? The Aygo’s x-themed trim names are inspired by the contrasting X shape running from corner to corner at the front.

The Aygo is distinctive to look at, but as easy-going and cheerful as it is, there are more refined and higher-quality city cars out there for less money. Its strengths are in its unique looks, well-judged interior styling and depth of technology, and even if its engine is fairly ordinary, it comes across as a well-rounded and likeable thing with good ride quality and individuality.

Toyota has opted for a bold design; something with more youthful energy and uniqueness than a lot of its competitors - some of which choose cuteness while others go for a more grown-up look. The Aygo is that friend who’s always up for a laugh, always playing little jokes on people and never seeming to run out of energy.

Buyers can choose to make the frontal ‘X’ stand out more or less, depending on the spec and paint colour they prefer, while the X itself is black on some versions and satin grey on others. Continuing the lines all the way to the front windows is a really neat and stylish touch that also helps to make the mirrors more of a feature than an afterthought.

The rear doors on five-door versions are almost like half-doors, though; they’re that small. Squashed all the way to the back of the car they don’t do the overall design any favours.

Although the Aygo shares its interior design with its C1 and 108 sister cars, Toyota’s interpretation on the lower models is better. Satin-finish dashboard and centre console trim meshes more harmoniously with the cheap plastics on the dashboard top and doors, as well as with the central switchgear for the heating and air movement.

But in the middle of the range and upwards, the interior ambience is supplemented by a climate control panel instead of traditional dials, and with orange digits that match the backlight of the simple LCD display in the instrument cluster, the key display zones begin to look a lot more cohesive.

According to model specification, the interior trim accessories can vary in colour. The shiny finishes are rarely particularly classy, and they pick up fingerprint marks far too easily, but the overall impression is the best of the Peugeot, Citroen and Toyota triplets.

The seats are typical city car seats; flat-based, flat-backed and neutral, neither too soft nor too hard. They aren’t comfortable over longer distances but the Aygo is likely to spend most of its life in town, anyway. The ride is great, though, with extremely well-judged damping that can’t quite counteract the tiny wheels that fall into every hole, but that does give the Aygo a surprisingly mature, composed ride for its size.

If practicality is important, then this isn’t the right car, with a small boot even for the class and only four seats. Most of its rivals only have four, too, but for the Aygo’s price there are cars available from the class up, with more passenger space, an extra seat and better luggage room.

Its turning circle is good, if not quite as good as some urbanites might hope or need it to be. Overall it’s a practical enough choice for simple city driving and doesn’t have any major let-downs. It’s just that there are better-packaged, more spacious options.

The basic Aygo’s kit list makes grim reading. There’s a USB port, remote central locking and electric front windows, but that’s about it. The stereo has no CD player and there’s no air conditioning. Better models get the latter, along with electric mirrors, Bluetooth, DAB radio and the option to add the the excellent 7in touch-screen that also comes with a reversing camera.

Mid-range models come next with identical kit lists but different colour combinations. The infotainment screen and reversing camera are among the highlights, and it’s here that climate control and automatic headlights arrive. Sat-nav is an option.

Elsewhere in the range are different colour versions of more or less the same spec quota, masquerading under a different name. Different options come into play, though, like an electric ‘funroof’. Don’t be fooled by the special edition X-cite’s flashy looks. It’s a special edition based on x-play, with a strong yellow and black theme throughout, but it actually has less tech than the x-press and x-style.

Finally, x-clusiv has more thrown at it, including keyless entry and start, automatic headlights and front fog lamps. Disappointingly, though, sat-nav is only optional.

There is only one engine option for the Aygo, whereas its French compatriots get two. The 1.0-litre three-cylinder petrol unit is Toyota-designed and suits the car well, although it doesn’t have as much mid-range muscle as the noisier 1.2 you can order in the 108 and C1. It’s one of the smoother three-cylinder city car engines on the market and lacks some of the aural character of the Volkswagen Group one, but it’s a refined thing on a smooth road.

It’s far from fast, but it’s competitive for the class. It likes to be revved, and in fact it needs to be to build speed quickly, but stray onto the motorway and owners will quickly find that the Aygo simply doesn’t have the pace to pull out into gaps and make overtakes safely in the same way as larger, more powerful cars.

It’s light; as light as 840kg in its most basic trim and only 910kg at its heaviest. That allows it to dart around town really well, zipping away from a standstill and bounding up to 40mph with real eagerness. It turns well, too, with a wheel at each corner giving it something of the cliched go-kart feel without being stiff or unforgiving. Although it gets bouncy on rough roads, it handles pretty well for the class.

Optional on all models except the basic x is a much-reduced form of the Toyota Safety Sense suite. For the Aygo it includes Pre-Collision System, which uses laser sensors and a camera to detect obstructions ahead before hitting the brakes if it needs to, and Lane Departure Alert.

There are a whole load of colour and styling options and it’s not always simple to get your head around. The x-cite has its own shade called Yellow Fizz that no other model gets, while the x-clusiv is the only model to have access to Cyan Splash metallic. All models except the yellow-only x-cite and the basic x can be ordered in Bold Black. The generic shades that all standard grades come in are White Flash, Red Pop, Electro Grey, Silver Splash and Deep Blue Buzz.

The fun colours are Yellow Fizz and Cyan Splash, but for a lower cost the x-press cars, in either metallic white or dark grey, both with a black front-x, a red roof and red detailing, are also an option.

A trim grade simply called x starts the range off, with a couple of the basics covered and a matt black front-x but overall coming up with a fairly disappointing package. It doesn’t even work as a cheap and cheerful option, because there are cheaper and more cheerful city cars out there.

X-play is the bread and butter of the range, saving costs by maintaining steel wheels, but adding the essential air conditioning, Bluetooth and DAB radio, with a leather-covered steering wheel lifting the interior a little. The front-x is gloss black, unless the body is black, in which case it’s silver.

X-cite is based on x-play but adds far more visual punch in its model-specific Yellow Fizz paint, black contrasting roof, black wheels and black details. Yellow details appear inside, and it does look pretty brilliant. X-clusiv is the range-topper but it doesn’t quite have as much equipment as standard as you’d expect for its not inconsiderable price, leaving the range on something of an anticlimax.

The Aygo is a small car built to be as easy to park as possible. Some of its rivals add rear parking sensors but in truth a car this size shouldn’t and doesn’t need them. Compact dimensions like this make car parks and drive-thru lanes a doddle.

With only one engine to talk about, the news is universally good by default. An official average of close to 70mpg for the manual, and only a shade worse for the automated manual, is an achievable target on a long cruise. Drivers who know how to extract the best fuel economy from an engine and have the patience to stick at it will average over 60mpg in everyday driving, although that will drop to more like 50mpg with a lot of urban scratching.

It’s quite hard to force the Aygo to be seriously inefficient, even if you’re driving it like you stole it. Around town it’s borderline impossible to average less than 40mpg, and if you do, it’s either down to poor driving style or excessive time spent stationary with the engine running.

Servicing and parts will be chips-cheap. Brakes, tyres and windscreen wipers are all small, and cost next to nothing if sourced through an independent garage. Toyota dealers will always charge over the odds but offer the luxury of a Toyota-headed invoice to go with the service.

There isn’t a lot to go wrong with the Aygo because it doesn’t have much complex technology in the first place. It was graded inside the top quarter of the 150 cars in the 2016 Driver Power survey for reliability, which is encouraging.

The Aygo’s pricing structure is ambitious, to say the least. It’s one of the more expensive city cars, priced to compete directly with the Renault Twingo, Smart ForFour and Fiat 500, which are all more desirable cars. Its pricing is way above the Skoda Citigo and SEAT Mii, which are arguably the best all-rounders in the segment, are better equipped at the top of the range and are around £2000 less expensive.

The cheapest Aygo is £9135 at retail value, which is far in excess of the equivalent figures for a number of very good entry-level rivals, and the lack of sat-nav is another blow to the Aygo’s value for money. It’s an affordable car, but is inescapably worse value than many of the other small cars out there.