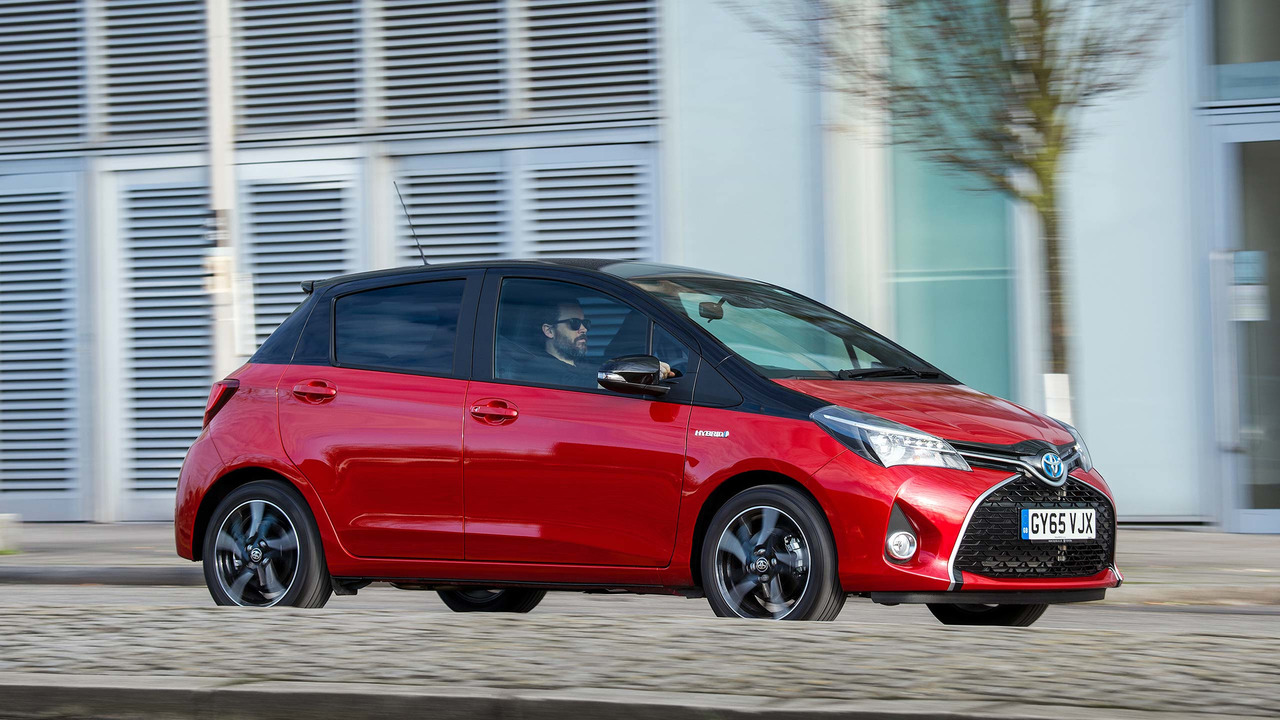 A supermini with something of a USP.

As Toyota’s most popular small car, the Yaris supermini has a big weight on its shoulders. It delivers what Toyota buyers want, though, including a hybrid drivetrain option, which is adapted from the Prius and shrunk down for the Yaris’ smaller shell. The hybrid models aren’t cheap, but the technology gives the Yaris a unique selling point and an advantage in town over just about anything else in the class, boosting efficiency as well as desirability.

Did you know? The Yaris Hybrid never needs to be plugged in, generating its own electricity intelligently as and when it needs to

The Yaris is a car of two halves; a regular three- and five-door hatch with smooth petrol and diesel engines but which leaves drivers a bit cold, and the very popular Hybrid Synergy Drive model that delivers something different, something highly advanced and something much more enjoyable from several perspectives. In hybrid guise it becomes a much more upmarket, distinctive and memorable car that stands out, so it’s no wonder it’s so popular.

While Toyota was, a couple of years ago, forced to give the Yaris an early and major update to try to keep up with higher-quality superminis that were emerging all the time, the budget went on the interior rather than the design. That means the look is still safe and unchallenging, with a pretty but largely plain face but a dowdy dress sense that falls behind many of its rivals for raw visual appeal. It’s like a good-looking teenager who hasn’t discovered ASOS yet.

Small wheels are a blight on the Yaris throughout the range. The maximum size, 16in, still looks quite small beneath the Yaris’ frame and, from a younger buyer’s perspective, versions with 15in wheels look a little too much like old people’s shopping cars. To be fair, since that’s partly the audience Toyota is going for with the Yaris, it shouldn’t be surprising. In that respect, the Yaris is right on the money.

The huge lower grille is quite daring, though, and looks good edged with a silver strip. The headlights are sharp at the corners and overall the face delivers about 90 per cent of the good design on the whole car.

Small wheels and taller tyres certainly sacrifice style, but they present another, very shiny side to the coin: comfort. With the benefit of more give from the tyres, the Yaris rides with a natural, easy-going smoothness that encourages relaxation. In some superminis that target higher showroom appeal with big wheels, you can find yourself maintaining a tense state of body and mind behind the wheel, subconsciously bracing against the next impact and the increased vibration, but the Yaris does a fine job of isolating the most troublesome of the road’s imperfections.

The seats themselves are fine, if not outstanding in any way. They are certainly much softer than those in Volkswagen Group rivals like the Skoda Fabia, and for short distances they are welcoming. Anti-whiplash headrests protrude forwards in a way that can bother people who wear their hair in a bun at the back, but in practice the Yaris proves comfortable even over longer distances, with excessive wind and road noise the slight issues on the motorway.

Hybrid models regularly cut to electric power only in town, eliminating even the tiny vibrations caused by the 1.5-litre petrol engine under the bonnet. It instantly transforms the Yaris into one of the most comfortable, quiet and relaxing mainstream superminis out there.

The Yaris is tall for a supermini, standing over the Ford Fiesta and Vauxhall Corsa by a few centimetres, but that guarantees good headroom for all passengers. Its boot is some way smaller than those of the class leaders, like the Hyundai i20 and the class-leading Honda Jazz, but it does allocate more space for rear legroom and has larger rear doors than some.

It’s easy to park, and the cars with smaller wheels have a tighter turning circle. Hybrid models aren’t approved for towing but the petrol and diesel cars are. Only the lowest two trim grades are sold as three-door cars, with the rest fixed at five doors by default.

Buy a petrol or diesel Yaris at the bottom of the range and the kit list doesn’t stretch far. Electric front windows and mirrors, remote central locking, a USB port and CD player are about the extent of it. But the wider Yaris model has a huge amount of tech available, even if some of it is optional.

Plainly, though, the biggest technological draw the Yaris has in its favour is the hybrid drivetrain. A closed system, it constantly balances the available electric power from the small battery with input from the petrol engine, cutting the engine out where it can, and providing reasonably lengthy stints through the urban sprawl without using the engine at all. Maximising hybrid usage becomes a game; it organically promotes more efficient driving as you challenge yourself to make the best use of the system to save fuel.

No Yaris is fast, and none are exactly dynamically sparkling, either. The car is quite heavy even as a basic petrol, which helps to improve the ride stability but hurts the acceleration, braking and cornering performance. Top speeds of only a little over 100mph give the game away.

Slow steering, tuned for easy manoeuvres in car parks, has no feel at all and doesn’t respond well to being asked to chase the fast-moving car in front along a winding road. The whole process of going fast feels quite alien to the Yaris, despite the big improvements to the body’s stiffness that were made at its last update.

The diesel model is the fastest Yaris with the best in-gear acceleration performance, but the Hybrid responds faster to throttle inputs and has instant electric torque on hand to advance the pace if needed. A cheaper option than both is the reliable 1.33-litre petrol, but it lacks any meaningful performance and is only really suited to slower roads.

The Yaris has brilliant availability of active safety systems as part of the Toyota Safety Sense suite, but annoyingly they aren’t actually standard at any trim level. Autonomous emergency braking, Lane Departure Alert and Automatic High Beam are the active systems available, with the emergency braking the most important. If you take your eyes off the road just as the car in front brakes, the car will warn you and then hit the brakes if you don’t.

Low-speed safety is taken care of by parking sensors at both ends and a reversing camera, but only the latter is standard from Icon grade upwards. Hill-start Assist Control is standard on all Yaris Hybrids but not available on the rest, and you can count on stability control, tyre pressure warnings and seatbelt reminders for all seats. Seven airbags is class-leading, though.

Euro NCAP rated the previous Yaris as a five-star car with great scores for adult occupant protection and safety assists, in particular. The current car ought to be even better but it has not been tested.

Yaris Design models come with three optional two-tone colour schemes, each with a black roof but with either Tokyo Red, Glacier Pearl White or Platinum Bronze bodies. Their interior aesthetics and upholstery vary according to the exterior colour.

The standard single-tone colours span the sensible and the more exciting. The standard Chilli Red is fine but flat white, the other free option, looks cheap on the Yaris. The optional pearlescent Glacier Pearl White is little better. Tyrol Silver metallic and Sintra Blue metallic are also best avoided as they emphasise the overly conservative styling, but Platinum Bronze metallic, Decuma Grey metallic and Eclipse Black metallic are much better.

On the brighter side there is the deep, lustrous Tokyo Red pearlescent, Island Blue metallic and Orange Edition, which, as the name implies, is for the special Orange Edition model only.

Active starts the range off with a fairly dismal equipment list, but it’s the most efficient trim grade because of its lighter, smaller steel wheels so there’s a hybrid option for those who want maximum efficiency and the ability to escape the London Congestion Charge.

Icon models stick to 15in wheels but this time they’re alloy. Unlike the Active grade it can be ordered as a 1.33 automatic petrol and adds the Toyota Touch 2 infotainment interface, air conditioning, cruise control and better headlights, while Icon Hybrids get dual-zone climate control and push-button start.

Design gets partial LED lighting tech, larger alloy wheels and some styling additions, but isn’t all that different to Icon. All two-tone options are Design models, though, which makes them the best to look at. The Orange Edition is also based on Icon spec, but with larger alloys, a panoramic sunroof and unmissable orange paint it’s a stand-out special edition.

Excel is offered as a hybrid five-door only. It’s built for people who want the very best Yaris, but with that in mind it’s annoying to see sat-nav, parking sensors and the active safety equipment all optional. The hybrid technology under the skin is expensive, though, and costs have been cut elsewhere. A Honda Jazz is far better equipped for the same money, but lacks electrification.

It’s a small car with a good turning circle and better-than-average outward visibility, so it feels slightly smaller than it really is. It’s easy to keep it on the straight and narrow even on tiny country lanes, where its slim body is a help, and its compact dimensions all round make tight car parks less of a chore.

While the Yaris offers an efficient 1.4-litre diesel that’s the best option for getting maximum motorway miles per gallon, hybrid is the way to go for the lowest running costs because it saves so much fuel around town. Cutting the engine and using solely electric propulsion as often as possible means vastly improved urban fuel economy over absolutely any conventional supermini. It’s possible to score over 90mpg around town if the driver knows what he or she is doing.

The other reason that the extra expense of the Hybrid might be worth it is that, on 15in wheels, it just hits the threshold for escaping the London Congestion Charge. This and the Prius are the only non-plug-in cars to do so. For anyone whose daily commute takes them to the city centre, the Yaris Hybrid can save them a small fortune over the course of a year. The smaller wheels are a no-cost option on the Excel model, combining maximum equipment with minimum running costs.

The Yaris is a simple car and not much goes wrong. It’s within the top 25 per cent for reliability in the 2016 Driver Power survey, which suggests it should be fuss-free, but it actually places below a lot of other superminis like the Mazda 2, MG3, Skoda Fabia, Kia Rio and Suzuki Swift, among others. Hybrid models require extra maintenance so will be more expensive to service.

Pricing is competitive for the non-hybrid models but, diesel option aside, it’s hard to see any factors that mark it out above the competition, apart from the certain sensible and reliable image that comes with the Toyota badge. Dealers are generally less willing to discount the prices than they are at other brands, though, so the Yaris can end up looking expensive.

The hybrids are definitely pricey, with the entry-level model retailing for £15,815 and the alloy wheel-shod Icon set at £17,015. Add another £500 to that for Design, and for the Excel Hybrid it’s £18,315. The Orange Edition is yours in petrol or diesel only.

The difference between diesel and hybrid is between £415 and £645, with the diesel the cheaper. The hybrid drivetrain is much the more enjoyable, though, so it’s worth the extra.