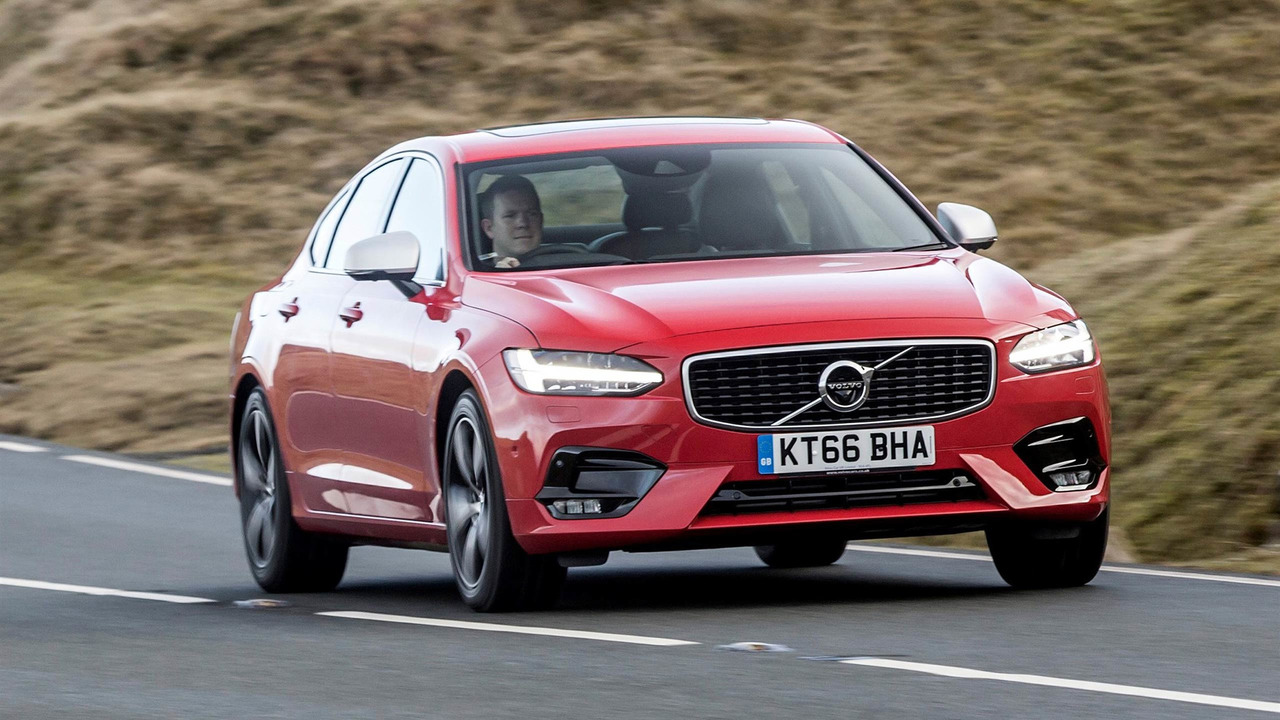 The Volvo S90 at last gives the Swedish firm a competitive model in the executive car segment. It’s now a strong alternative to the all-conquering German big three for those who don’t want a Jaguar or a Lexus. Safety is a particular standout, and Volvo’s new downsized range of engines means good on-paper fuel economy is assured.

Did you know? Volvo has dropped six-cylinder engines, meaning the S90 is an executive car you can only get with a four-cylinder motor.

The Volvo S90 marks a real return to form for the Swedish brand. The previous car was dated and off the pace. This new one, which draws so heavily from the Volvo XC90 SUV platform, is a huge leap on, with neat and well-formed styling, a roomy and smartly-finished interior plus a sophisticated chassis that drives with real assurance. Engines are economical too, although some executive users will miss the purr of a six-cylinder. Volvo will hope its advanced T8 plug-in hybrid alternative does enough to compensate.

Base Momentum trim lacks some of the glitzy styling features of the popular Inscription trim, which some prefer and others think makes it look a bit plain. Either way, the S90 is a refreshing alternative to the Germanic norm in this sector, sitting with the Jaguar XF in offering something new without going to the extremes of Lexus’ rather divisive GS.

Within the S90 is a delightfully comfortable cabin that’s warm, simple, clean and very Swedish. Again, it’s a nice alternative to the stark German norm, with some terrific details such as the knurled engine start-stop knob and sheer variety of trim options. Plastics are decent quality too, perhaps not quite as lavish as the latest BMW 5 Series but certainly a big step on from before.

The S90 is a very roomy car, as you’d hope given its ample exterior dimensions. A high seating position feels commanding and there’s a good view over the flat, expansive bonnet. Seats are, typically for a Volvo, broad and extremely comfortable, and cranking up the seat heating gives a great sense of well-being in winter.

Further back, the rear is amply spacious too. There’s lots of legroom and it’s a wide cabin, while the seats themselves are supportive and good for long-distance business trips. Rear electric windows are standard, as are air vents in the B-pillars. Optionally available is rear seat heating, while Inscription and R-Design models get illuminated front and rear door pockets for a luxury touch. Laminated side glass is an expensive option but cuts noise levels while improving security.

The S90’s four-door saloon boot is a class-average 500 litres. For context, that’s much bigger than popular cars such as the Volkswagen Golf, and a 60/40 split rear seatback helps extend it further: total load length with the seatbacks down is almost two metres.

Onboard technology is where the latest Volvo S90 has a real showroom standout over rivals - thanks to its clever centre portrait-format touchscreen. This 9-inch display is a bit like that in a Tesla, and masterminds most of the car’s functions via table-style pinch and swipe interactions. Built-in sat nav with European mapping is standard, and Volvo throws in lifetime map updates as well as live traffic information.

That’s not all. The Sensus Connect infotainment system connects to no end of web apps - Volvo is proud to offer in-car Spotify and Skype applications - and you can even connect directly with a dealer using it. The only thing it’s really missing is Apple CarPlay, which Volvo bizarrely insists on charging £300 extra for. When it’s standard on a Kia Rio, it really should be standard here (and costs Volvo a point in the category points). At least Bluetooth is included for free, for smartphone connectivity.

Move up to Inscription or R-Design trim and Volvo includes a 12.3-inch Active TFT driver’s instrument display, which is fully configurable and can display mapping behind the steering wheel. Optional on all models is the Volvo On Call system with smartphone app, giving you a range of emergency breakdown call functions, plus stolen vehicle tracking and remote door unlocking. Again, though, it’s odd that this is optional, when many rivals include it for free.

Safe, secure, stable. Volvos have always been ever so, but the latest S90 brings that approach right up to date. It’s no driver’s car, not like a BMW 5 Series or Jaguar XF, but delivers laid-back, easygoing motoring that takes everything in its stride without getting ruffled or shaken off course.

Steering is effortless and accurate, if not exactly packed with feel, and the suspension has enough integrity to not get upset by challenging roads. Saying that, perhaps the most surprising aspect is a ride quality that even in regular cars is occasionally firm in town, and is downright stiff in the R-Design - perhaps too much so for UK roads. We really wouldn’t go bigger than 18-inch wheels: we dread to think what the S90 is like running on optional 21-inch wheels. The ride is quiet, though, adding long-distance reassurance.

A worthwhile option is Volvo’s Active Four-C Chassis, which has all-round adaptive dampers and rear electronic air suspension. This broadens the car’s abilities and adds self-levelling to the rear end.

There’s just a limited engine range offered with the S90 at the moment; the plug-in hybrid turbo petrol T8 arrives later in the year. For now, it’s a 2.0-litre four-cylinder turbodiesel in two states of tune, 190hp D4 or 235hp D5 PowerPulse, both paired with a standard eight-speed automatic. The latter’s ‘PowerPulse’ system is Volvo’s clever anti-lag turbo system, that blasts compressed air into the engine so it responds more quickly to the accelerator. It’s very effective - and currently includes all-wheel drive (the D4 is front-wheel drive).

Both engines cruise reasonably quietly but become gruff when revved hard - this is when you’ll miss the lack of a six-cylinder engine option. Most of the time, though, it shouldn't be an issue, particularly if you go for the more powerful and relaxed D5 PowerPulse: its 0-62mph time of 6.7 seconds is representative of how surprisingly eager it feels.

All Volvos are safe cars. The firm built its reputation on this. The S90 is no exception. Needless to say, it’s scored a five-star Euro NCAP safety rating, awarded 95% for adult occupant protection and 93% for safety assist, despite the 2017 standards it was assessed to being the toughest ever set by the safety body.

Volvo has actually upped the standard safety kit on 2017 S90s, including an enhanced City Safety system that detects pedestrians, cyclists and even large animals: it comprises a front collision alert warning plus full auto braking if the driver doesn’t respond. There’s also a road edge detection system that senses if you’re about to run off the road and tries to auto-steer you back on: if a collision is unavoidable, it primes the car for an impending crash by, for example, tightening the seatbelts.

Other safety features standard to all S90s include a road sign information display, speed limiter, all-seats belt reminder system and an active bonnet. Optional safety kit includes a blind spot information system which includes cross traffic alert and a rear collision mitigation system (again priming safety systems if it detects someone’s about to drive into you), and a head-up display that shows sat nav, speed and road sign information in the windscreen.

Choose from 15 colours on the S90, with two solid colours, Passion red (only for R-Design) and Ice white, coming for free: solid Black Stone is £400. Nine metallics are £700 each, and comprise Magic blue, Savile grey, Twilight bronze, Bright silver, Osmium grey, Onyx black, Luminous sand, Mussel blue and Maple Brown. Premium metallic is £1000 and lets you pick from three - Electric silver, Crystal white or Bursting blue the latter only available on the R-Design.

Volvo keeps things simple for trim lines: there are just three. Momentum is the base one, then it’s Inscription and R-Design. Volvo actually expects R-Design to sell best in the UK, by a small degree (despite its firm ride…), but it’s broadly split evenly across them.

Even a base Momentum is a really well-equipped car. LED headlights, dual-zone climate control, heated leather seats, sat nav and adaptive cruise control are all standard. So too is Volvo’s Pilot Assist system, which effectively offers autonomous driving at speeds of up to 80 mph (this is an improvement from early launch S90s, where the speed was capped at 30 mph). So long as you have one hand resting gently on the steering wheel, the S90 will drive itself…

R-Design, meanwhile, has Leather/Nubuck contoured sports seats, cushion extensions for the front seats, an alternative five-spoke 18-inch alloy wheel, black headlining and a lowered sports chassis. If you must, you can pay £2,500 to have 21-inch alloys on the R-Design, but we really wouldn’t.

The Volvo S90 is almost five metres long and pretty wide with it. If you want a big executive car with status, choose the S90 - it’s almost as large as some luxury cars...

Four-cylinder engines mean decent fuel economy, particularly for the best-selling D4. Combined economy of 64.2mpg is very impressive for such a large car, with CO2 emissions of 116g/km looking more like figures from a supermini than a five-metre luxury saloon. The D5 PowerPulse, partly due to the drag of its all-wheel drive system, is a bit less glittering but still averages 58.9mpg (and emits 127g/km CO2). Given its extra performance, this might be a price worth paying.

Because the S90 is so efficient, Volvo has fitted relatively small fuel tanks to it: 55 litres on the D4, 60 litres on the D5 PowerPulse. This might limit the range a little if you like to drive your executive car with enthusiasm. Needless to say, Euro 6 emissions means a particulate filter is fitted as standard: neither S90 requires AdBlue additives.

Volvo’s latest SPA architecture is, so far, proving reliable. It’s already used in the XC90 and has been developed to be scalable without issue. Certainly, some of the gripes that afflicted older Volvos have hopefully been ironed out; using relatively simple four-cylinder engines rather than more complex multi-cylinder motors should help here.

Pricing is simple for the S90 at the moment, as there are just six models offered - three trims, with two engines in each. The base Momentum D4 looks a bargain at £32,955, given its terrific standard equipment levels. It’s a £7k jump up to a D5 PowerPulse AWD, at £39,955: that’s the price you pay for extra engine tech and an all-wheel drive chassis.

R-Design and Inscription cost the same, meaning buyers can pick between sporty looks and luxury. A D4 version costs £35,455 and the D5 PowerPulse AWD costs £42,455. For this reason, Volvo is expecting the D4 R-Design to prove very popular in style-obsessed Britain...