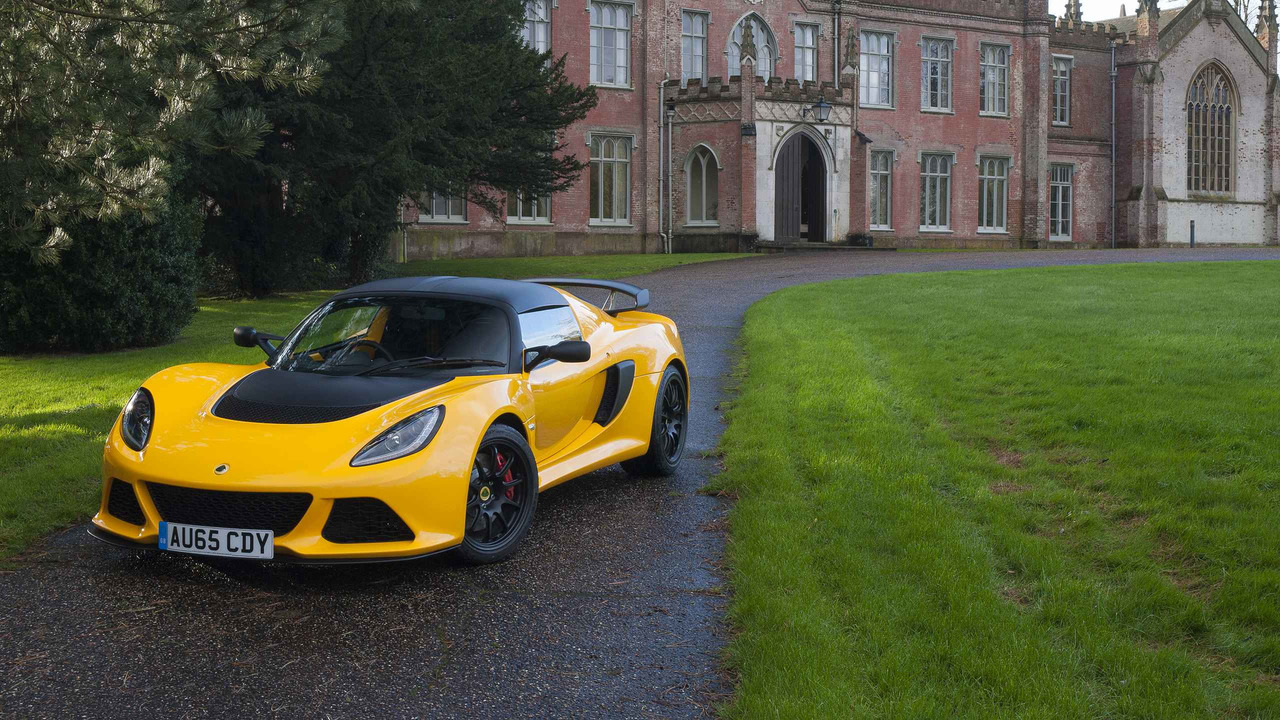 Doing the opposite and putting on weight.

The Exige might have diverted somewhat from Lotus founder Colin Chapman’s ‘add lightness’ mantra, but the bigger, weightier sports car comes with a corresponding increase in V6 supercharged punch to counter any mass it’s gained. The key Lotus attributes remain, too, sensation being high up the list of priorities, not just raw speed, but the weighting, precision, and feel on offer from the steering and brakes, and the way it manages to ride with comfort despite its clear focus. The Exige is a spectacularly impressive and able sports car then, though with that comes some obvious compromises. It’s cramped inside, visibility out is limited, and there’s nowhere to carry anything. But then you don’t buy a car like this with practicalities in mind; the Exige, in either Sport 350 or Sport 380 forms, is a wonderful, engaging drivers' car, which will keep up with those costing many multiples more, which is part of the joy of it.

Did you know? Are you a Lotus and Bay City Rollers fan? You can option the Exige Sport with tartan seats. Bye Bye Baby indeed.

The Exige might be bigger and heavier than the car that originally introduced the name, but the increase in size and weight has been offset by a significant increase in power. As the cars the Exige’s performance competes with get increasingly complex, and expensive, Lotus’ retained focus on purity and simplicity remains absolutely central to its appeal. If you value engagement then the Exige is right up there among the very best sports and supercars, so this is a genuine rival to cars like Porsche’s 911 GT3, at around half the price. Sure, there are some ‘compromises’ that come as result of this: the interior is pared back, the materials a bit sketchy in places, and getting in and out requires more than a degree of flexibility. Find the right road though and you’ll simply not give a damn. That has always been the Lotus way, and the Exige is brilliant, and it keeps getting better and better with time.

The Exige’s growth is a product of necessity, as Lotus’ fitment of a supercharged V6 engine necessitated a stretch in the wheelbase, so it took the opportunity to increase the front and rear tracks at the same time. It’s not as pent-up, dinky, and so obviously related to its Elise relation as a result, which is arguably a good thing; especially at the price Lotus asks for it now.

Lower and lither, every panel bar the doors is new over the old car, while the upright, aerodynamic Kamm tail is reminiscent of its predecessor and vintage race cars. There’s a large rear wing and jutting front splitter too, helping contribute to the Exige’s high speed stability. The Exige is an extrovert, uncompromising sports car in its style with wheelarches filled by 17-inch wheels up front and 18-inch rims at the rear on both the Sport 350 and Sport 380 models; the more powerful car is distinguished by additional aero vanes situated ahead of the front wheels.

Even by the standards of focused sports cars the Exige takes the idea of pared-back to the maximum, regardless of the leather covering many surfaces inside. That minimal approach is not entirely at the expense of comfort, though, as while the interior is undoubtedly stark by current standards, the body-hugging sports seats hold you in all the right places, that embracing grasp not just to the benefit of connection to the car itself, but comfort, too. The suspension also has Lotus’ incredible ability of delivering the sort of taut control you want and need in a car like this, but allied to ride comfort that’s able to smooth out all but the roughest of roads. There’s a fair bit of wind, road, and engine noise, and don’t, whatever you do, drop any loose change behind the seats, or you’ll be hearing it rattling around the bare aluminium cabin forever. The offset pedals are a bit of a pain on longer trips, too, though fine if you’re just taking it out for the hell of it - as you’ll feel inclined to.

Getting in remains something of a contortionist’s trick, though you soon get the knack of clambering over the wide sill. In fairness the sill’s height has been dropped since the car was first launched, but kudos to you if you ever achieve entry or exit with anything approaching grace. There is a boot, but it’s behind the engine, so it gets hot - so forget party rings from Iceland. You don’t buy an Exige with practicality in mind, then. Do option the hilarious ‘cupholder’ if you want a laugh at the S&M style hammock-like appendage it adds to the dashboard, though we’d never recommend putting any bottles in it, and certainly not a mokkachocalatte, or whatever your scalding hot drink of preference is.

How to say this politely? Look elsewhere if you want new-fangled connectivity, smartphone integration and the likes. And, really, given Lotus’ unapologetic focus on the driver you shouldn’t really want, or need any of the distractions that draw your attention from the sheer thrill of driving this car. There’s a stereo, but we’re talking one that fits in an old DIN slot, which tells you everything you need to know. By current standards it’s technologically parked, but then that’s not necessarily a bad thing, switch your phone off, bung it in that 'drinks' holder, snigger, and forget modern life for a while.

Forget the technology and connectivity; this is where the meat is with the Lotus, and the reason you’re here. First up, power comes from a 3.5-litre supercharged V6 engine delivering either 350hp or 380hp. Heavier it might be, but that’s relative, as the Exige 350 is just 1,125kg, while the 380 is lighter at 1,110kg. That’s enough to enable the 350 to reach 62mph in a claimed four seconds dead from a standstill, the extra 30hp of the 380 shaving three tenths off that. Top speed is an academic 170mph and it’s not the initial acceleration that’s the defining characteristic, but the in-gear performance. Get that supercharged V6 above 4,500rpm and it produces peak torque, and it’ll tear up to its limiter with real conviction.

The gearchange mechanism might look good with its exposed workings underneath, but it’s the weakest link in a driving package that’s otherwise all about precision and feel. Shifting the six-speed gearbox takes patience and skill, the lever's movement across the gate lacking the finely honed accuracy that the rest of the controls exhibit; even so, it’s not so bad as to have us recommending you specify the optional automatic. The engine’s response is never lacking, though it’s at its most immediate with over 3,000rpm on the rev-counter, where it fills the cabin with a raucous sound that’s entirely in keeping with its track focus.

The steering is an absolute joy, the wheel just brimming with feel, it squirming around in your hands and letting you know exactly what’s going on at the front axle. Informative rather than busy, its weighting is spot on, Lotus perfecting on the off-centre response and rack ratio to very good effect. With all that information to hand the Exige’s performance is so exploitable, the chassis forgiving, the standard selectable ESP system allowing a choice of Drive, Sport and Race modes, working with the ABS, Traction Control, and Vehicle Dynamic Control increasing the thresholds of the systems to allow more control to the driver. However you use it, be it on road or track, it’s a car that’s absolutely overflowing with sensation, which is absolutely key to its appeal. We’d save the sizeable jump in price the 380 commands over the 350 and opt for the ‘slower’ car.

Lotus covers the basics by modern safety standards, and that shouldn’t put you off. There are driver and passenger airbags, ABS, and sophisticated traction and stability control systems, just none of the anticipatory, driver monitoring, and autonomous electronics that are creeping into even mainstream cars these days. The Exige’s extruded aluminium structure is very strong, the brakes are superb, and its agility should help you avoid an accident in the first place.

In typical Lotus style the paint colours are, by and large, simply described. No Dusky Dawn here, just Solid Red, Solid Yellow, Metallic White, Metallic Blue, and so on, with the obvious exception of Racing Green - this is a British car, after all. Lotus can paint it any colour you desire, though, assuming you’re prepared to pay for it.

The two-model line-up (if you ignore the track-only Race 380) comprises of the Sport 350 and the Sport 380, the key difference being the output, which is their name, in hp. The 380 gains some carbon fibre trim to help shed some weight and there’s a slightly different aero package, too. Elsewhere, you’ll really need to bend the ear of your Lotus dealer as to what different packs you should option, though we’d go with the Track Pack, add air conditioning, and a stereo, as well as full carpets and tartan trim, though we’d forgive you if you chose leather over the Scottish cloth.

The Exige is wider and wilder than before, but still tight inside…

Buying a car such as the Exige is an indulgence, so you’ll not be overly concerned with how much it costs, and be happy in the knowledge that similar performance (and arguably less thrills) usually cost a lot more to buy and run. Fuel economy is decent enough given the power output, with the 350 having an official combined economy figure of 28mpg, and CO2 of 235g/km. Insuring it shouldn’t be too expensive via a specialist broker, especially as it’s more than likely to be garaged and for occasional use only.

Service items like tyres, brakes, and the likes won’t be cheap, but the Lotus is a paragon of simplicity in comparison to many similar performance rivals, and the Toyota unit powering it should be bombproof regarding reliability.

While the Exige’s purchase price might initially look like a bargain it comes relatively basically specified as standard. You need to pay for air conditioning, a stereo, and more besides. Even then it’s worth it though, as the Exige delivers more than enough thrills to justify a few excursions into the options list for some essentials.