The return to a modern classic

Honda’s Civic Type R came back with a bang several years into the model cycle, as a product developed in tandem with the Japanese firm’s Formula One comeback. The turbocharging technology developed for motorsport has been honed for use on the road in both this and the NSX hybrid supercar. This Type R is worlds apart from its predecessors, but at the same time it still feels familiar.

Did you know? The current Civic Type R has more than double the torque of the 2007 model, and at less than half the engine speed.

This is a car that demands commitment and, when the planets align, rewards the driver at least as much as anything else in the class. It’s fast, furious and easy to enjoy at any speed. However, the engine lacks a little character, the +R mode is far too hard for the road and the styling is a little conspicuous, to say the least. There can be no doubting Honda’s engineering achievements, though, and for anyone who likes to mix their weekend driving with the occasional track day, it’s sublime. 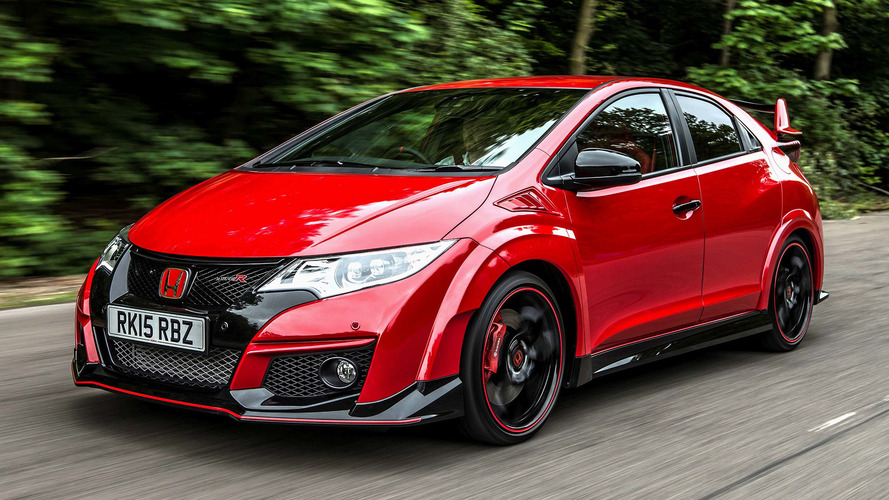 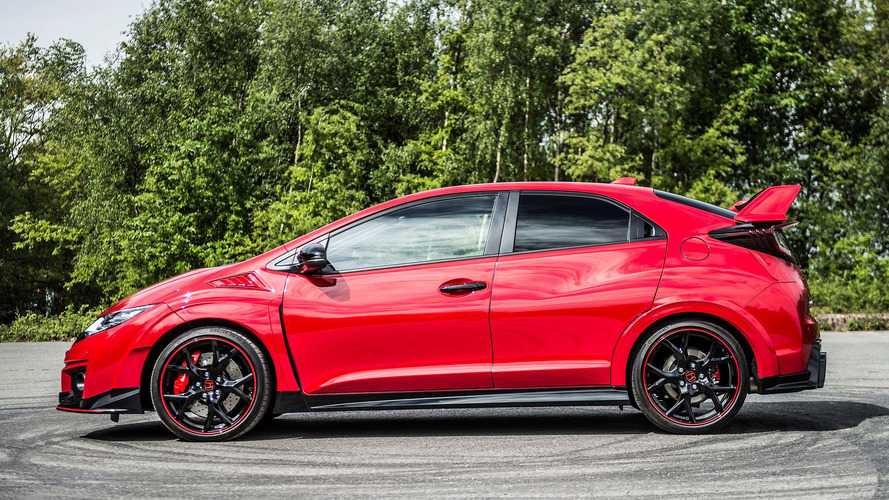 Honda hasn’t held back with the bodywork. Huge, square-edged wheelarch extensions are a Marmite feature, the tyres are about as low-profile as it’s possible to conceive and the huge rear spoiler gives a truly motorsport-derived look. It’s impossible to mistake this for a common-or-garden Civic – or anything else, for that matter.

While the body isn’t as flowing and curvaceous as the Ford Focus RS, or as obviously Euro-centric as the Volkswagen Golf GTI Clubsport, it’s wonderfully aggressive. For buyers who really gel with this styling, every time they set eyes on it they’ll be glad they bought it.

Impressive 19in alloy wheels have thin spokes to make the most of the theatre behind. Huge, drilled front brake discs are gripped by chunky Brembo calipers that are exactly the same as the rear ones on the NSX supercar.

The rear doors are partly disguised by moving the handles into the black-trimmed corner above the rear edge of the door itself. At a glance, it could look like a strangely-proportioned three-door. It’s an odd combination of regular, practical hatchback and bolt-on body parts from hell, like a sort of four-wheeled Terminator. 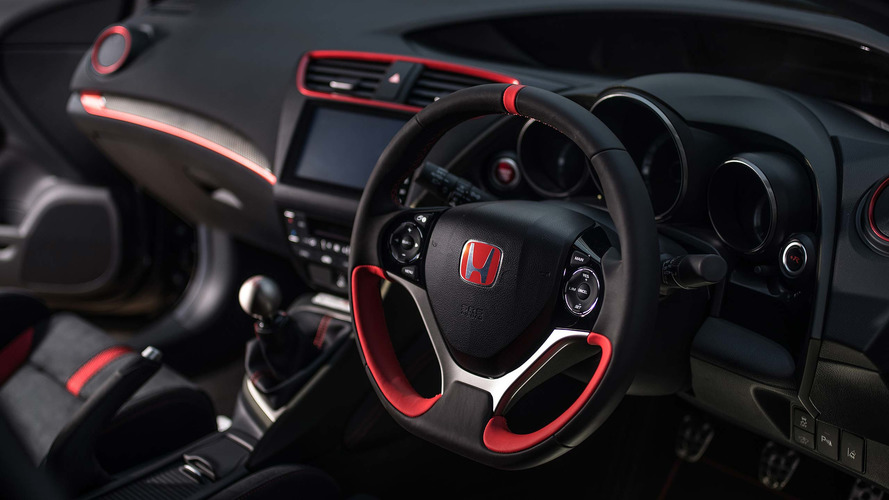 The interior will feel like home to anyone who has owned any post-2001 Civic Type R. The supportive bucket seats, a Type R tradition, are deeper and more aggressive than ever, and the red and black trim remains. The red steering wheel inserts of the Red Pack are the only slightly tacky part of the interior decor.

The seats aren’t as hard to exit as you might think by looking at them. The gap between the seat back and base side bolsters is enough to slot your leg into while turning in the seat on the way out. It does mean that the fabric at that point will wear through faster, and will eventually tear – but not for tens of thousands of miles. Or maybe even six-figure mileage, depending on how it’s used.

Honda has designed a clean and simple control layout, enhanced by the standard media screen with supplementary buttons beneath. The climate control is kept separate, making it easier to use than the equivalent digital setup in the Peugeot 308 GTI. A nice touch is the spherical metal gear knob with a red transmission map, just like in previous Type Rs.

Comfort here is never going to be on a par with the ordinary Civic hatchback, and so it proves. The standard suspension setup is well damped given how short the actual suspension travel is, but ultimately it does thump into grids and manhole covers with force. The hardcore +R mode is so stiff that it should be avoided at all costs on the road.

The 498 litres behind the rear seats make a mockery of most other hatchbacks, whether hot or not. Honda’s clever packaging has accessed 155 litres more than a Golf R hatchback, for example. On the other hand, the Type R doesn’t have the standard Civic’s flip-up ‘Magic Seats’ in the back, and it can only seat two rear passengers.

Another negative from a practicality standpoint is the huge rear spoiler, which blocks visibility and, all too often, renders the rear-view mirror useless. Urban drivers might want to add some form of alloy wheel protection, too, because kerbs are kryptonite for the neatly-forged 19in alloys. 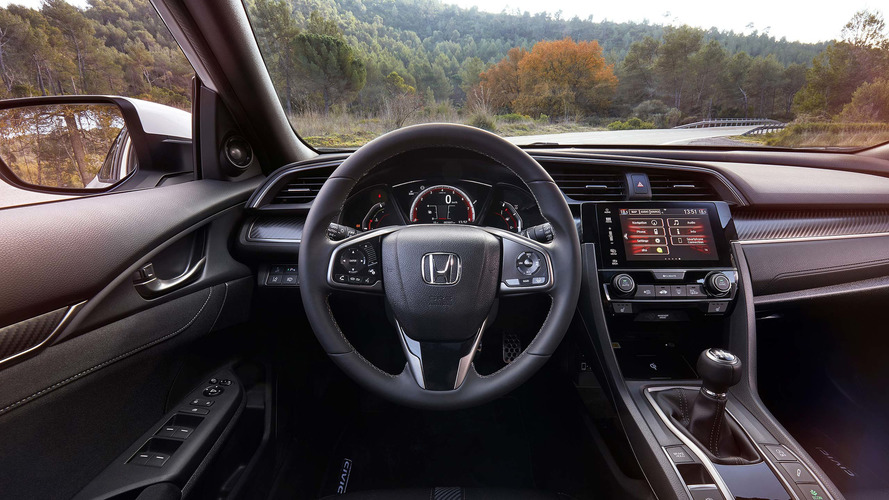 There’s a lot to shout about on the technology front. Honda hasn’t held back, equipping the standard Type R with adaptive dampers, keyless entry and start, climate control and a rear parking camera.

The highlight for most people will probably be the infotainment unit, which has a seven-inch touchscreen. The driver and front passenger can access AM, FM and DAB radio, internet radio, various compatible apps from their smartphones and hook a device up via Bluetooth for making/receiving calls or playing music wirelessly. There are two USB ports for connecting and charging phones and MP3 players, too. Controls on the steering wheel allow media navigation and more.

Sat-nav operates via the same screen, but isn’t standard until GT level. The software is sourced from Garmin, so works intuitively and reliably, even if the graphics aren’t the most sophisticated. Also added on GT spec are an extra two speakers and a higher-output amplifier.

It’s impressive to see LED headlights as standard. They cast a more natural colour of light than either xenon or halogen equivalents, reducing eye strain at night. The LEDs themselves are cheap, but the necessary reflector designs are not. It’s still not typical to see them standardised at the £30,000 mark, but it’s getting more common. 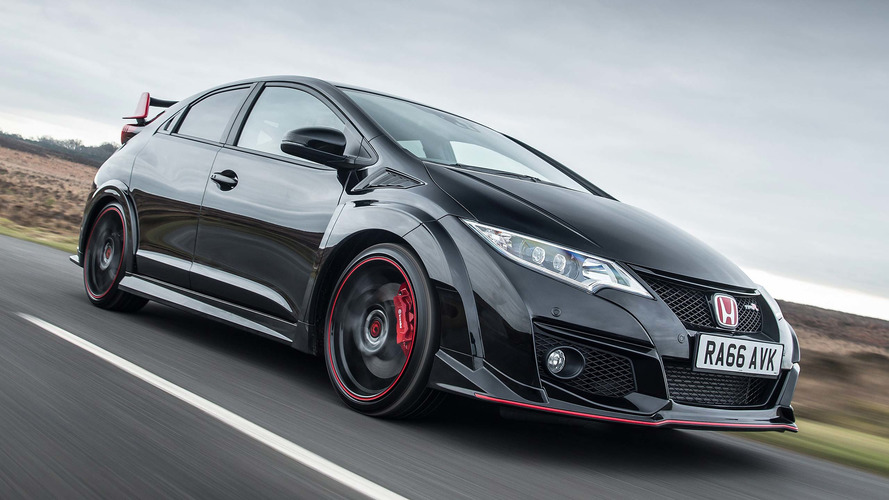 After the switch to turbo power, the Civic Type R has developed a very different character to its ancestors. It relies far less on revs, producing peak torque from 2,500-4,500rpm and hitting peak power at just 6,500rpm, some 1,500rpm lower than before. The gearing has been lengthened to compensate, but even so, this car is far, far quicker than any production Civic before it.

The turbo lag and loud, hissing theatrics from the wastegate are addictive. Pushing your foot down and waiting for that surge of performance, along with the turbocharger’s whooshing boost, never gets old. What does disappoint is the actual engine noise, which, beneath Honda’s attempts to disguise it, is characterless, monotonous and droning.

A mechanical limited-slip differential can’t stop the torque steer that mirrors behaviour from previous Type Rs, but it does find incredible front-end grip through corners. Entering turns a gear higher than you would have in the older cars, the traction, stability and relentless speed gains are mighty.

Its handling is stable and flat, the sense of which is boosted massively by figure-hugging seats that don’t allow your body to roll about with lateral g-force. It stays on a line well, and even when you apply full power with the wheel turned, the way it wrestles with physics is never overly intimidating – just nicely so. 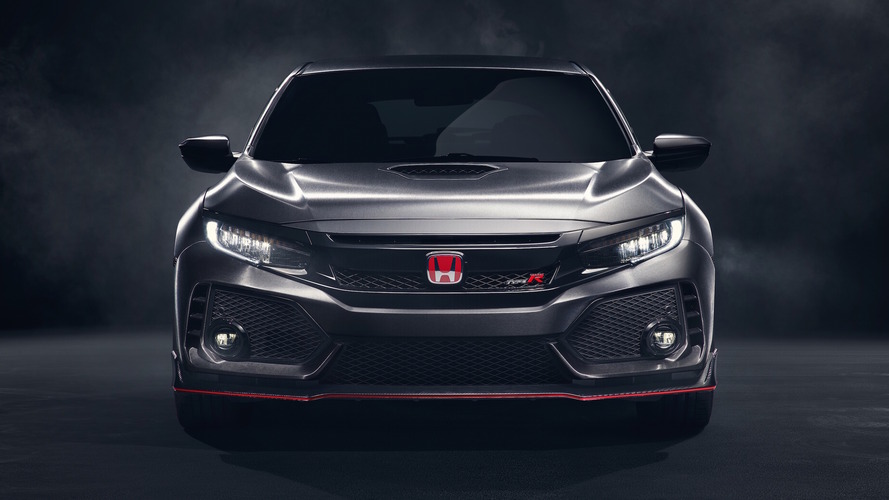 On a more conventional front, there are airbags to the front, side and along the so-called curtain, at the edges of the headlining. A fairly typical spread of semi-active safety gadgets like electronic brake-force distribution, ABS, hill-start assist and stability control is boosted by standard-fit City-Brake Active to help prevent clumsy low-speed dings. 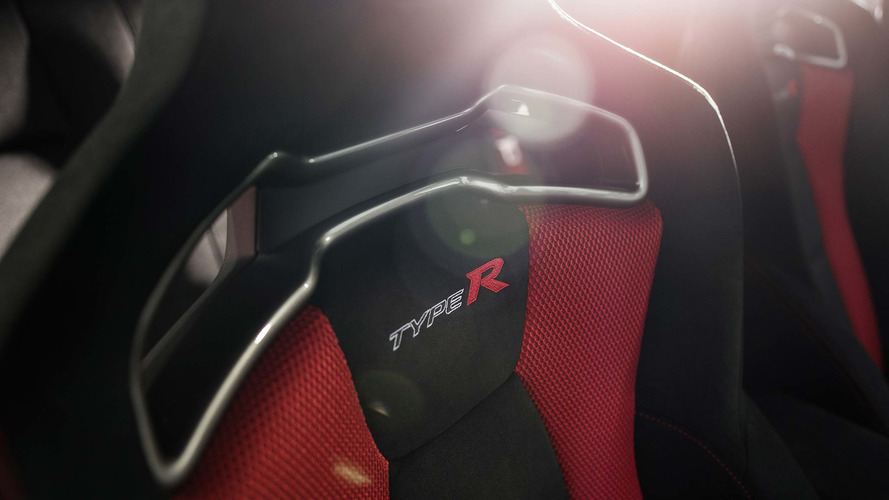 Milano Red and Championship White (the same white that has graced notable other fast Hondas, such as the run-out special edition S2000), are the two flat colour options. The upgrades include Crystal Black pearl, Polished Metal metallic and Brilliant Sporty Blue metallic, which could well be a literal translation from the Japanese.

Red is the iconic Civic Type R colour these days, but the car’s aggressive, machine-like exterior arguably best suits Polished Metal, which adds to the sense of purpose and contrasts nicely with the red and black interior. In truth there isn’t a bad colour for the Type R, and all five shades look great on it.

The Type R only needs a simple range. Just two model variants are offered; the standard car and the Type R GT.

Both models can be specified with various option packs inside and out, adding either red or carbon-fibre trim accessories. The carbon rear spoiler is gorgeous, for example, and there are plenty of individual aesthetic options available to spice up the car’s look even further.

With standard cars getting cruise control, a reversing camera, climate control and the seven-inch infotainment screen, there’s little cause to upgrade to the GT unless you really want navigation. The extra safety equipment of GT cars is welcome, though, as are the automatic headlights and wipers, front and rear parking sensors and power-folding door mirrors.

The Civic is quite tall for the class, and it looks it. But even with bulkier, longer bumpers it’s still not an unwieldy car. Less than 4.4 metres in length is nothing to write home about, but it is a little wider than the class average, taking into account the mirrors. Most owners won’t be bothered about its ability to tow, but technically it can do the job. 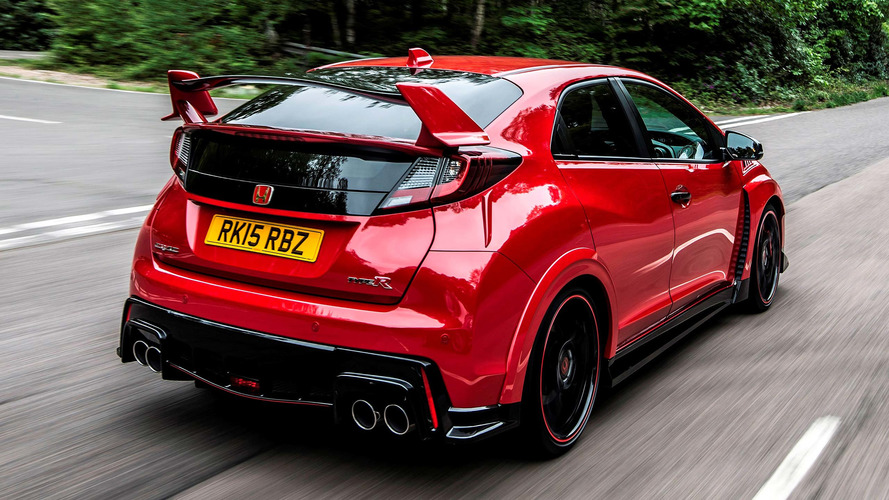 According to the official tests, the Type R is capable of averaging 38.7mpg, but in the real world the only way to reach it is to sit at 60mph on the motorway for long enough. The Type R is built for performance rather than efficiency. As soon as the turbo starts to work, the fuel economy drops.

A realistic estimate over the course of a whole tank is in the mid-20s for a careful but chiefly urban driver, or 30mpg with a mix of faster roads. Only motorway sloggers will see more than 35mpg.

Insurance for a car like this is naturally high, but the last few sold before the new model arrives could be a relative bargain in terms of road tax. The April 2017 rule changes mean cars ordered new will cost £140 per year after the first year, instead of £210.

The Civic Type R is far from the simplest or least stressed car on the road, but thankfully Honda seems to have over-engineered its mechanicals to the point of class-leading reliability. Very few owners have complained of faults. Servicing for such a powerful, potent car is always going to be a little more expensive than average, though. 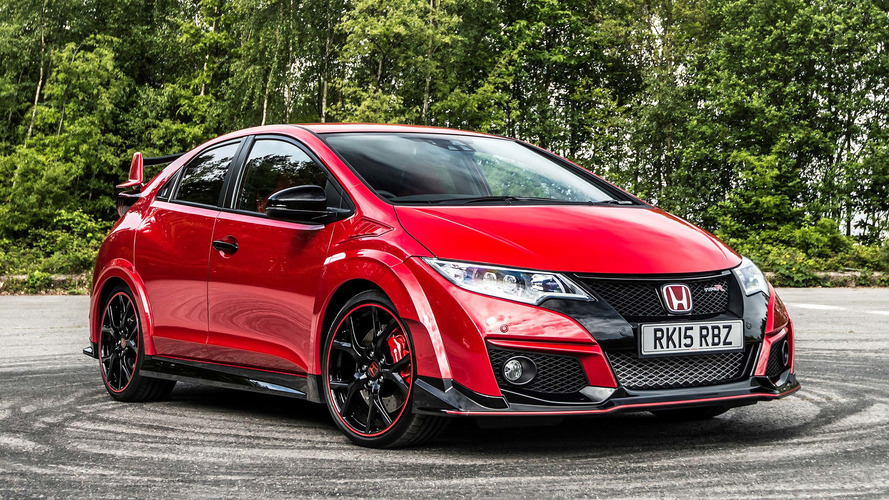 For a product that feels as well engineered, lively and capable as this, that’s particularly good value. It needs to be, though, because few other classes of car have quite so many genuinely brilliant options available.