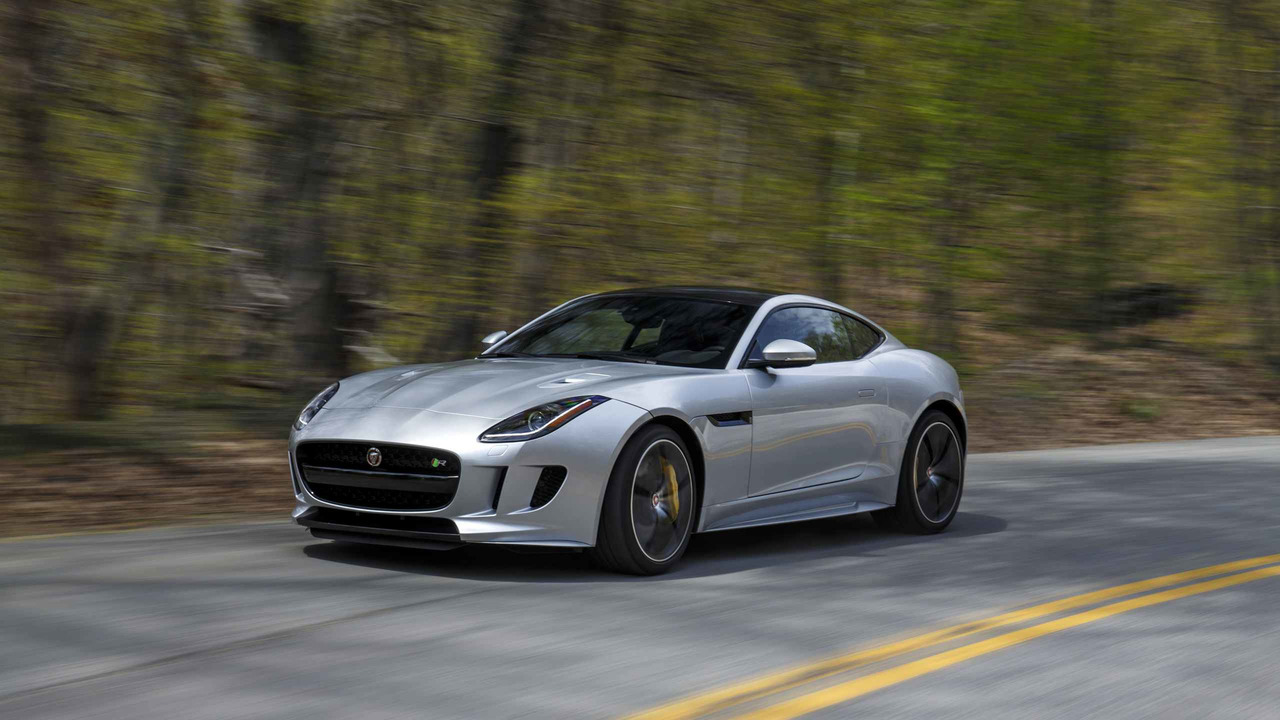 The Jaguar F-Type is the British marque’s flagship, a simply gorgeous sports car that evokes one of the most iconic vehicles of all time – the E-Type. Available in Convertible or Coupe guises, the F-Type spans many different levels of performance; the V6 models could be considered a rival to the likes of the Porsche Cayman, while at the other end of the scale the thunderous SVR is an alternative to a supercar like an Audi R8… and the wildly different prices of the range’s extremes reflect the Jag’s variety. The F-Type comes with powerful supercharged petrol engines only, a choice of rear- or four-wheel drive, and a manual or automatic gearbox.

Did you know? The Jaguar F-Type first launched as an open-top (called the Roadster) in 2013, with the Coupe following in 2014.

Although exterior looks are a subjective matter, it should be abundantly clear to anyone and everyone what the Jaguar F-Type’s main appeal is: its sensational, beautiful appearance. There can’t be many motors, if any, on sale today that are better-looking than this sports car. Luckily, it’s not ‘all show and no go’, as the F-Type has an excellent chassis, a classy interior, powerful engines, and plenty of luxury equipment. It’s a bit too heavy for something with only two seats, the boot on the Convertible is utterly laughable, and the low-speed ride can get fidgety on bigger wheels, but overriding all these flaws is the fact the Jaguar can transform each and every drive into a special occasion.

The F-Type is glorious enough to behold as a Convertible, but it’s simply stunning as a Coupe. There will be purists who say it can never match the ethereal beauty of the E-Type that it so clearly mimics, but we reckon the F-Type is rightfully up there in the pantheon of all-time great car designs. It doesn’t matter whether you choose a base V6 with its centre-exit exhausts and 18-inch wheels, or a storming R toting quad exhaust pipes and 20-inch rims – the F-Type is an exquisite machine. In fact, the only model that might not meet all tastes is the range-topping SVR, which has fixed body addenda, including a carbon-fibre boot-mounted spoiler, which somewhat clutters the Jag’s elegant lines.

Jaguar has made two rounds of revisions to the F-Type in its life so far, but the looks were unaltered until 2017, when the double-apertures in the front bumper were replaced with a single, larger opening on all cars. LED headlights were also added on higher-spec models. Jaguar has dropped the ‘S’ badging that used to identify the 380hp V6 over and above the 340hp model, so look at the brake callipers: they’re silver for 340hp, and black for 380hp.

It’s beautifully made within and the large diagonal grab-handle on the passenger side of the centre console only serves to reinforce the driver-focused feel of the cabin. For a bit of Jaguar cabin theatre, the central air vents rise out of the dash when the climate control is operating.

The 2017 updates brought in new magnesium alloy seats that are thinner-backed and lighter than the old chairs by 8kg a piece, allowing for more longitudinal movement and thus more legroom; V6 models have Sport items, the V8 cars (and the limited production 400 Sport) get their own, model-branded Performance seats that are more sculpted and supportive.

Additionally, the V6 cars have an instrument cluster with a five-inch central TFT display and a speedo that reads to 190mph; the dial on the V8s goes up to 210mph.

This is where the Jaguar lags behind rivals. While it is accepted that no dedicated sports car is ever massively practical, the F-Type remains relatively compromised. Nowhere more so than the Convertible’s boot; it’s a feeble 207 litres and it’s a shallow, unusual shape as well – meaning the soft-top has no grand touring capability, as even one average-sized suitcase won’t fit in the boot. Incredibly, like the Coupe (408 litres of boot space), there’s an entrapment release lever in the compartment… in case someone, presumably only a Borrower, gets trapped in the boot.

Furthermore, even as a Coupe the Jaguar is a strict two-seater, when some rivals are 2+2s or four-seaters, and there aren’t many storage cubbies to play with. However, the steering column is electrically adjustable on all models and so are the seats, so the driving position can be thoroughly fine-tuned.

Every F-Type model comes with a wealth of kit that would most likely be a cost option on a Porsche, putting the Jaguar’s price into perspective. Expect Navigation Pro displayed on an eight-inch Touch Pro screen in the dashboard, Bluetooth, DAB, InConnect Apps, USB connectivity, and a beefy 380-watt Meridian sound system with 10 speakers and a 10-channel amp. The only option is the Meridian 7.1 Surround Sound upgrade: 12 speakers, a 13-channel amp, and 770 watts of pure sonic power.

Don’t let anyone tell you the 3.0-litre 340hp F-Type is slow; it’s just slightly less mind-numbingly fast than the other models. Anything that can do 0-62mph in, at most, 5.5 seconds and go on to more than 160mph flat out is more than quick enough for most people’s needs. It also sounds good, thanks to an Active Sports Exhaust that opens valves in the pipes to make it louder at higher revs; the 340hp is the only F-Type on which this isn’t manually switchable, though.

With an additional 40hp and 7lb ft, for 339lb ft in total, the 380hp V6 makes a good case for buyers not bothering with the V8s. It makes a tremendous noise and will do 0-62mph in less than five seconds as an auto, with a top speed of 171mph. This engine is the only one found in the 400 Sport, where power is hiked again to 400hp.

The F-Type R used to be the performance flagship, because 550hp and 502lb ft equate to ‘ridiculously quick’: 0-62mph in 4.1 seconds and a top speed limited to 186mph. But then the SVR arrived, the 5.0-litre V8 enhanced to 575hp for 0-62mph in 3.7 seconds – and, in coupe format, it’s the first Jaguar since the XJ220 supercar to be capable of hitting 200mph. The F-Type’s V8 powerplant sounds rudely, cataclysmically naughty, and blesses the R and SVR with huge appeal.

On the V6 models, a six-speed manual gearbox is offered, but it doesn’t do a huge amount for the driving experience and it brings penalties in terms of performance, economy, and emissions; also, the eight-speed automatic is a peach of a transmission. The V6 cars are rear-wheel drive as standard, but there’s the option of all-wheel drive on the 380hp model, while both the R and the SVR are AWD only – this was a 2017 development, as the R used to come with rear-wheel drive too. AWD, where available, is always paired with the automatic transmission.

In terms of the driving experience the Jaguar is blindingly good, but ultimately hampered by its kerb weight. The lightest car clocks in at a portly 1,567kg and the heftiest – the R Convertible – weighs a colossal 1,745kg. That robs the Jaguar of the outright handling finesse of the Porsche models that it goes up against, but it’s still bloody good fun, nonetheless. The steering is excellent, while the body control is very impressive, without ruining the high-speed ride in the process; sadly, the F-Type can be a bit unrefined at town speeds as a result. The Convertible doesn’t lose a huge amount of dynamic involvement for its open roof, but it’s less structurally rigid than the Coupe and so if you’re a keener driver, go for the tin-top.

Another strong department for the Jaguar, although it lacks some of the driver assist systems – like radar cruise and a driver alertness monitor – that you might expect to at least be options on such a prestige car. Standard equipment includes ABS with Electronic Brake-force Distribution and Emergency Brake Assist, a tyre-pressure monitoring system, Pedestrian Contact Sensing, Torque Vectoring, ESC, and multiple airbags (four in the Convertible, six in the Coupe).

All cars get rear parking sensors, but front sensors are only found on the SVR, while options include a reversing camera, Blind Spot Monitor, Reverse Traffic Detection, Closing Vehicle Sensing, and an automatic parallel parking feature. From the 380hp V6 upwards, the F-Type models get a limited-slip differential to aid the car’s road-holding abilities.

The 400 Sport and the SVR are exceptions. The former only comes in three colours, which are Santorini, Yulong, and Indus (all no-cost), while the latter comes in six paints: the same three as the 400 Sport, plus Caldera, Corris, and Ultra. Again, none of these paints incur any extra cost on the SVR.

Only the 340hp V6 can be found in the basic, unnamed specification, which includes 18-inch wheels, leather seats, climate control, cruise control, and push-button start. The R-Dynamic models get ever-so-slightly sportier styling with gloss-black detailing, larger alloys (19s on the 340hp, 20s on the 380hp), some interior trinkets, and – only on the 380hp – larger brakes and Adaptive Dynamics.

The 400 Sport is being made for the 2017 model year alone and, aside from its power gain, it is primarily a styling exercise, with dark satin grey exterior features, yellow 400 Sport script on the brake callipers, yellow stitching on the leather inside, 400 Sport-branded Performance seats, and aluminium gearshift paddles.

Moving up to the R and it has much more obvious exterior styling changes, as well as bigger brakes again with red callipers, keyless entry, and a Configurable Dynamics mode. The SVR has 20-inch forged alloys, plus SVR-branded interior items and a heated steering wheel.

It might only be a two-seater, but the F-Type isn’t tiny, as it’s long and wide – without including the mirrors, it measures 1,923mm across.

It will be dear to run the Jaguar F-Type; as only the 340hp automatic V6 emits less than 200g/km, both road duty and Benefit-in-Kind company car tax are steep; all models bar the 340hp auto are in the highest 37 per cent BIK bracket. No F-Type can return more than 34mpg and the V8s manage as little as 25mpg, while both the manual gearbox and the optional AWD on the 380hp V6 are best avoided if you’re trying to limit the Jaguar’s consumption.

Reliability is hard to gauge yet, but modern Jaguars are pretty well-built and the brand is earning a strong reputation for customer satisfaction, so the F-Type should prove to be a stolid machine. Service plans are available to cover the cost of maintenance over a set period of time for a one-off fee, and as servicing costs aren’t cheap, these packages are well worth looking into.

The Jaguar F-Type is a desirable, premium sports car, so it was never going to be a bargain, but the problem is that at the lower end of its range, it’s more expensive to buy than the Porsche Cayman, while at the top of the tree it’s priced alongside genuine supercars like the Audi R8 and Honda NSX. Therefore, unlike other Jaguars, it never feels competitively priced. The cheapest car is the 340hp manual Coupe at £51,450, the most expensive the SVR Convertible at a whopping £115,485.