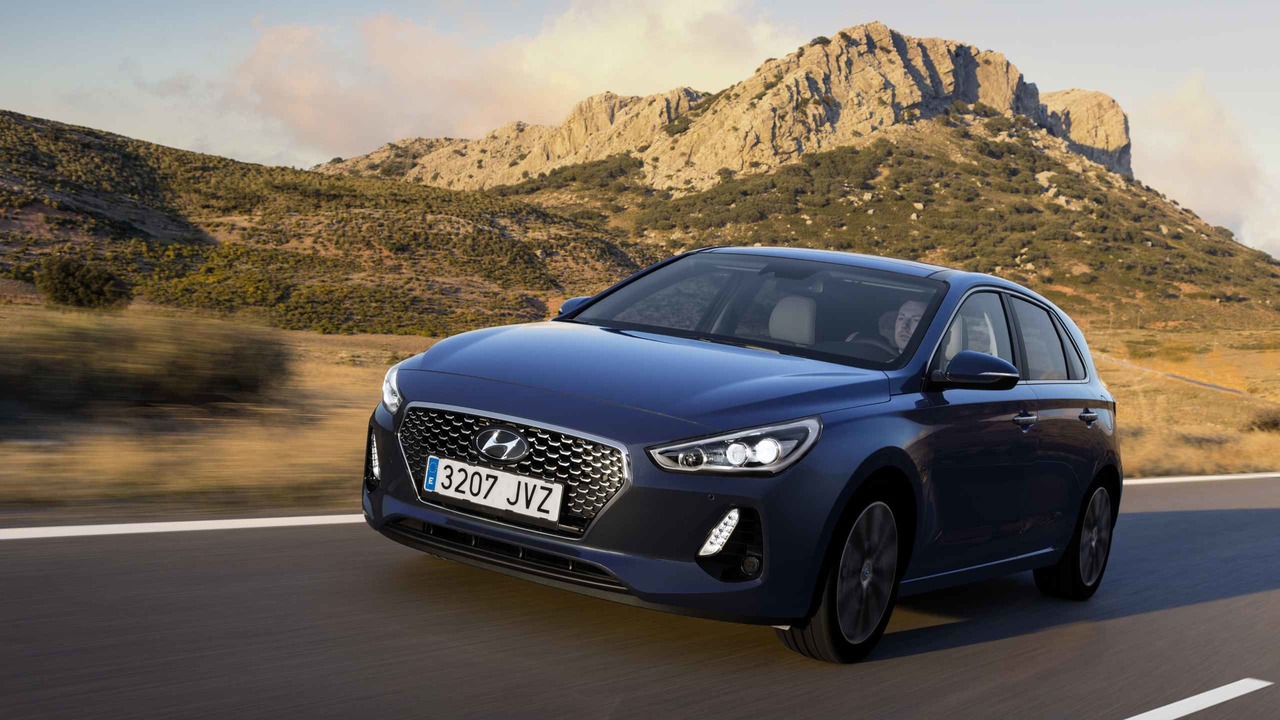 All the essentials, yet an uninteresting drive.

This is the Hyundai i30, the firm’s latest assault on the hotly-contested and crucial family hatchback market – a class inhabited by perpetual heavyweights like the Ford Focus, Vauxhall Astra, and Volkswagen Golf. The Korean company aims to muscle in among the leaders of this field, with its third-generation i30 featuring many improvements over its predecessor, such as a much classier interior, more urbane exterior looks, loads of safety equipment, and a chassis honed for European tastes. Hyundai offers the i30 in five-door and estate formats, with a choice of three engines – two petrol and one diesel, all turbocharged – driving the front wheels through either a manual or dual-clutch automatic gearbox. There are five trim grades and, on top of all of this, the i30 comes with Hyundai’s excellent five-year, unlimited-mileage warranty.

Did you know? While Hyundai is a Korean marque, the i30 was designed in Germany and all models for Europe are built in the Czech Republic.

A thoroughly polished and competent all-rounder, the Hyundai i30 is a strong contender in the C-segment. Its main strengths are its excellent refinement, a wide range of comfort and safety equipment across the board, competitive purchase prices, and of course the manufacturer’s superb warranty. What the i30 isn’t, sadly, is massively interesting to drive, let down by mediocre steering and a chassis that refuses to dole out any cornering fun. So, with the i30, less is more: stick to the sweet 1.0-litre petrol engine and therefore the lower trim grades, and it makes a fine alternative to the established major players from rival companies.

We’re not about to actively criticise the Hyundai, because it’s clear to see this third-generation car is the most European-looking example of the i30 yet built. There’s a neatness of line and compactness of shape to it that’s very pleasing, while it wears the company’s latest ‘descending’ trapezoidal grille shape – in essence, the S-shape sides of the grille’s frame are supposed to make you think of two hands gently cupping the Hyundai badge in the centre of the car’s nose. Right… There’s a range of nice colours available for the bodywork, including some bold metallic shades, and it looks like a quality piece of kit from base grade to range-topper.

The problem is, it’s a bit too neat and tidy, in an era when the exterior design of cars is becoming ever more daring and less homogenous – take, for instance, the 2017 Honda Civic, or the Mk4 Renault Megane. If all you want is quietly handsome looks from your C-segment five-door, Volkswagen, Peugeot, and Vauxhall already have that base well covered with their offerings, so the worry is that Hyundai has played it too safe this time around.

And, while Hyundai (and sister brand Kia) has long since grown out of the habit of simply copying European looks for its cars, there’s more than a suspicion that the i30 takes a little visual inspiration from some similar machines. There are elements of the Peugeot 308, Fiat Tipo, BMW 1 Series, and Volkswagen Golf to its make-up, which ultimately means it’s not a distinctive design that we’re going to rave over.

Again, it’s not exactly replete with swooping lines and fancy digital instrument clusters inside, but while it might be accused of being as safe in design as the i30’s exterior, there’s no doubting the quality and comfort of the Hyundai’s cabin. The standard of plastics used is far higher than it was in the old Mk2 i30, and the layout of everything is perfectly understandable and easy to use on the fly. The leather-wrapped multifunction steering wheel is a nice touch (standard from SE Nav upwards) and the seats are shaped well, offering good comfort levels to drivers of all sizes.

All models get seats that can be tweaked in many different directions to get the best driving position, while the steering wheel is rake-and-reach adjustable too. Rear-seat space is a little less generous in feel compared to the front, chiefly thanks to limited headroom courtesy of the car’s deceptively sweeping roofline, but the boot is pretty large by class standards, holding 395 litres with the rear seats in place and 1,301 litres with them folded away. Those backrests split 60:40 and are easy enough to drop, but they don’t lie flat when stowed, leaving a step in the middle of the load area floor as a result. The overall report card for the i30’s cabin would be positive, but if you really want something massive and family-friendly inside, a Skoda Octavia is going to be a better bet.

As Bluetooth, DAB, a USB connection, and a multifunction steering wheel with integrated audio/phone controls are all standard from the entry point of the i30 range, things get off to a good start for the Hyundai. A five-inch touchscreen, reversing camera, and rear parking sensors are fitted to the next grade up, the SE, but it’s the SE Nav that offers the most cost-effective, alluring specification, boosting the infotainment screen to eight inches and adding desirables such as satellite navigation, voice control, wireless ‘Qi’ phone charging, and Apple CarPlay and Android Auto compatibility. The only real black mark is that the Hyundai comes with a six-speaker stereo on all models, with no option to upgrade to a higher-powered audio system.

Three engines form a simple-to-understand line-up for the Hyundai. Both the petrol engines, branded T-GDi (for turbocharged gasoline direct injection), are new to the i30 family, although the 1.0-litre three-cylinder engine (120hp, 126lb ft) has been used in other vehicles within the brand before. The four-cylinder 1.4 T-GDi, though, is an all-new powerplant and it delivers 140hp, along with 179lb ft of torque.

Also employed in the i30 is a 1.6-litre CRDi diesel, with outputs of 110hp and 207lb ft. Either of the 1.4 petrol or the turbodiesel can be had with an optional seven-speed DCT (dual-clutch transmission) automatic, while a six-speed manual gearbox is standard across the board – it’s the only transmission for the 1.0 T-GDi. The 1.0 can be found at S, SE and SE Nav grades, the 1.6 CRDi manual appears at SE level and above, and then the 1.4 T-GDi (with manual or auto) and the diesel automatic option join from SE Nav upwards.

In terms of the comfort, there is little to fault with the Hyundai i30. All three motors are perfectly pleasant engines, although the diesel isn’t perhaps the finest of its type. The 1.4 T-GDi is much-lauded by Hyundai, but our favourite is actually the 1.0-litre. Despite significant on-paper performance disadvantages to the 140hp 1.4, the 1.0 doesn’t feel much slower in reality and it’s a lovely little unit, with a great soundtrack and a willingness to rev.

The Hyundai i30 continues to prove pleasant in terms of the ride quality, which is excellent, and the superb suppression of wind/tyre noise entering the cabin, which makes it a fine long-distance machine, but when it comes to handling it’s not all good news. The rear axle of the car feels utterly unwilling to get involved in any exciting cornering shenanigans and the variable-mode steering is another Hyundai system that lacks much in the way of feel or consistent weighting. Shame, as there’s a lot of front-end grip, a singular lack of understeer, and strong body control, which all suggests Hyundai’s chassis engineers were close to unlocking some significant dynamic potential, but instead just missed the target.

There’s no Euro NCAP rating for the Hyundai i30 Mk3 as yet, but we’re confident it should bag the top five-star award, given safety is clearly a key consideration throughout the range. Even the lowliest models benefit from the Lane Departure Warning System, Forward Collision Warning System, Lane Keep Assist, Autonomous Emergency Braking, Hill Start Assist Control, and a tyre-pressure monitoring set-up, plus six airbags and ISOFIX child seat fittings in the outer two rear chairs. That’s carried up to Premium level, where Blind-Spot Detection and Rear Cross-Traffic Alert are also added. With a structure that uses 53 percent advanced high-strength steel, we have no doubt the i30 will keep its occupants as safe as possible in the event of an accident.

There are two no-cost, solid colour options – Polar White and a new shade for Hyundai, which is Engine Red. Aside from this pair, another nine metallic or pearl finishes all incur additional expense and they are Stargazing Blue, Demitasse Brown, Intense Copper, Fiery Red, Platinum Silver, Micron Grey, Phantom Black, Ara Blue, and White Sand.

As with most modern Hyundai ranges, a five-strong specification line-up runs S, SE, SE Nav, Premium, and then Premium SE. As its name rather strongly suggests, SE Nav is where mapping becomes standard and Hyundai predicts it will be the biggest seller in the UK.

Even base S cars come with reasonable standard equipment, like 15-inch alloys, Bluetooth, DAB, USB, and a multifunction steering wheel. SE adds in 16-inch wheels and a five-inch touchscreen, plus rear parking sensors and a reversing camera, while SE Nav not only brings navigation, but smart features in the form of the eight-inch touchscreen, and Apple CarPlay and Android Auto compatibility.

Both Premium and Premium SE load up on the toy-count, with luxuries like leather trim, heated seats, a heated steering wheel, and a panoramic sunroof among more.

Like any good C-segment hatchback, the i30 is physically compact, despite its chunky appearance, and shouldn’t present any size problems to owners.

The i30 is not as conspicuously cheap for its sticker prices when compared to mainstream rivals as it once was, although when you factor in the technology-to-cost ratio and the five-year warranty, the value-for-money quotient of the Hyundai increases. It’s certainly less money than the equivalent Volkswagen Golf in matching specification, for instance, although its residual values are only middling for the class.

Fuel economy is decent on all i30s, ranging from anywhere between 51- and 74mpg-plus, with CO2 emissions between 99- and 125g/km. The 1.6 CRDi manual is the only car to get below 100g/km, although under the revised April 2017 VED tax laws that is no longer as useful a feature as it once was. It is still, though, the cheapest for Benefit-in-Kind, sitting in the 19 per cent bracket, so it’s the obvious choice for fleet managers. Be wary of the automatic gearbox, which not only harms acceleration on the 1.4 T-GDi and 1.6 CRDi engines, but also has a detrimental impact on economy and emissions; it’s a more significant drop on the diesel.

The third-generation Hyundai i30 only went on sale in March 2017 and so any major reliability issues have yet to present themselves, although the five-year/unlimited-mileage warranty of Hyundai is a storming deal that provides hassle-free ownership. Servicing is run on an annual basis or every 10,000 miles, whichever is sooner, and that schedule is irrespective of which fuel powers your i30’s engine. Individual prices are reasonable but Hyundai offers some attractive fixed-price service plans that cover two, three or five years’ worth of maintenance costs for a modest, one-off fee.

With prices of SE Navs from around £19,650 to £21,650, they make the most financial sense by offering the Hyundai i30 with enough comfort items fitted to make the car feel plush, without bring the extra expense of the Premium (+£1,800) or the Premium SE (+£1,300 on the Premium). The diesel model is around £1,000 more expensive than the 1.0-litre petrol and, while it might offer better on-paper returns, it’s not as pleasant an engine, so we’d stick with the turbocharged petrol option in SE Nav guise.