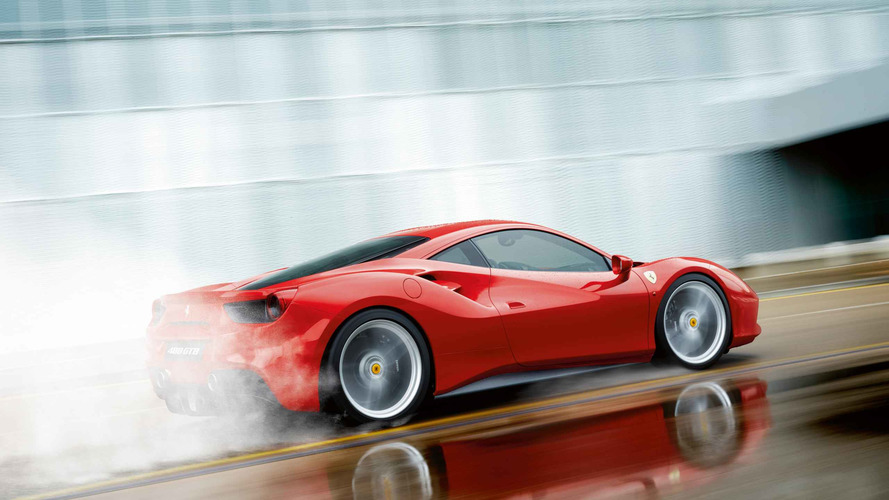 The 488 GTB is the first mid-engined V8 Ferrari since the iconic, limited edition F40 to feature turbochargers and there’s no greater demonstration of how far supercars have come since then. With its howling 3.9-litre V8 developing 670hp and a chassis that adopts all of Ferrari’s F1 know-how, the 488 GTB offers near hypercar pace, poise, and agility that has to be experienced to be believed. It’s genuinely difficult to comprehend that this is, California aside, the entry-point to the Ferrari range. The 488 GTB moves the supercar game forward, answering all those doubters who questioned whether the Italian company could build a better car than the 458 Speciale before it. Leaves us wondering just how ridiculous the performance will be when the next Speciale arrives…

Turbocharging was inevitable for Ferrari’s mid-engined 488 GTB, to help tackle the thorny subject of economy and emissions. The results are sensational though, and the reduced capacity 3.9-litre direct-injection V8 (still featuring a flat-plane crankshaft) punches harder, earlier, and over a greater spread of the rev-counter’s sweep, even if it does lose some of the heady, high-rev madness that defined the 458 before it. It’s faster everywhere as a result, significantly so and, on paper at least, the engine’s a little bit better for the environment. Ferrari has worked hard on the throttle response and it shows, as the 488’s accelerator does not betray its forced induction, while the chassis team has been just as busy to allow you to exploit all the 488’s prodigious pace. Few cars flatter the driver so ably, the 488 building on the already acclaimed talents of the 458 with Side Slip Control 2 among the electronic black magic to allow you to exit any corner at your chosen angle with smoke pouring off the rear tyres. On a track, of course. In short, it's an hilariously capable, phenomenally fast car that you have to re-calibrate your idea of speed for: the 488 might be turbocharged, but in no way has Ferrari blown it, as it’s absolutely incredible.

Given how F1 cars look these days you’d think Ferrari’s continual quest for downforce with its road cars would produce some compromises in design. Evidently not, as the 488 GTB is absolutely beautiful from any angle. It is clearly related to the 458 Italia that went before it, but distinct enough to cut its own dash outside Casino Square, Monaco, or the pit lane at a track day. Managing all the air flowing over, under and around it hasn’t hurt its looks, then, but all that wind-tunnel work allows the 488 GTB to force its Pirellis in to the tarmac with greater force than ever, as it produces over 300kg of the stuff - not quite the weight of a prancing black stallion, more like having a couple of small Shetland Ponies sat on its roof at its 205mph quoted maximum speed. The only hiccup in its design are those odd little door handles, which are a pimple rather than beauty spot on an otherwise glorious form.

As with its predecessors, there’s the ability to gaze longingly at the engine through a glass cover, the crackle finish and Ferrari writing the stuff that’ll make schoolkids giddy and their dad’s weak at the knees. Even the oil filler cap is beautiful, Ferrari’s attention to detail very much in the very best traditions of Italian design.

If the exterior is enough to take your breath away, so is the cabin. It feels special, with all the controls very clearly focused on the driver. The steering wheel is festooned with controls, much like that of a Formula 1 car. There’s none more important than the big bright red one saying 'engine start', though once you’ve pressed that, the Manettino switch allows you to dial up your preferred drive setting. Shame that Ferrari’s indicator buttons on the wheel answer a question nobody really asked. Still, less to get in the way of the huge gearshift paddles situated behind the sculpted steering wheel, which, given the way the engine devours gears, you’ll be flicking like a manic pinball machine. The suspension, despite its clear intent, rides with a composure that’s impressive, so long as you’ve got it in its softest setting.

There are a lot of seat options, Ferrari even offering them in different sizes to suit the varying widths of Ferrari’s clientele, though the sports buckets feel the most authentic, and for a shot of old school beauty the Daytona leather is just glorious. Plenty of opportunity to make it your very own, then, as Ferrari offers limitless personalisation for all the interior trim, but simple is best, not least as you’ll not want any distractions from driving it. The instruments are digital, save for the massive rev counter dominant in the middle of a pair of screens, though some of the controls for the ventilation and suchlike are a touch fiddly. Small sacrifices, we know.

Ever since the F430, Ferrari has built sports cars that at least give a nod to practicality. The 488 GTB has an accommodating cabin for two adults, while there’s a bit of cubby and oddment storage and a small shelf behind the seats on which you can stow thin luggage such as a laptop case. There’s a luggage compartment under the front bonnet, its 230-litre capacity enough to squeeze in a few nights' worth of kit and of course Ferrari offers tailored luggage sets that fit like a game of leather Tetris.

While it’s all about the driving (and the technology behind that is mesmerising), you don’t get wealthy enough to buy a 488 GTB by missing important calls or getting lost, so there’s all the connectivity and usefulness you’d expect in a modern car. Bluetooth, satnav, Apple CarPlay and more are standard, though it’s all a bit fiddly to operate thanks to the screen’s position behind the steering wheel and the interface to it. There’s a premium audio upgrade if you want it, but leave the stereo turned off and listen to that engine.

The 488 GTB is very different to the 458 Italia before it, but different in a very good way, as Ferrari demonstrates that a turbocharged future needn’t be a muted or unsatisfying one. To achieve that the engine’s controls are in a different league of complexity, the systems operating the 3.9-litre and the pair of twin-scroll turbochargers that force air into it, have been honed to the point where they’ll hoodwink you into thinking it’s naturally aspirated. There’s virtually no perceptible lag, as the response to your right foot is absolutely instant, and the speed that it brings is eye-widening. Indeed, the greater torque output from lower revs increases the speed, though Ferrari has worked to reduce the torque to create a more linear and natural feeling to the engine’s response via 'Variable Torque Management', and it works very impressively indeed.

It’ll rev all the way to 8,000rpm, which is a touch lower than the 458 did, but the increased urgency through the gears is tangible, the 488 GTB feeling more hyper than supercar in its pace. It sounds magnificent too, different admittedly, but by no means bad, as the 488 GTB’s unit still has the capacity to tickle your aural senses while it’s flinging you down the road absolutely devouring the seven ratios on its paddle-shifted transmission. That gearbox shifts with all the speed and accuracy we’ve come to expect from Ferrari, the slightest touch of the paddles resulting in another ratio up or down, keeping you busy, as it feels slightly short geared alongside the engine’s sheer enthusiasm to chase its redline. Do that and the pace is incredible, yet what’s even more staggering is how civilised and controlled 670hp and 560lb ft of torque can be.

That’s thanks not just to the engine and transmission, but the chassis it’s all fitted to. If the 458 demonstrates one thing, it’s that Ferrari is at the absolute top of its game in applying F1 technology to its road cars. The 488 GTB underlines that wasn’t a fluke, building on the 458’s foundations with even more incredible agility and balance, plus the adjustability on offer is little short of ridiculous. The damping is sublime, the ride exceptional as a result, the body and wheel control exemplary. Traction is mighty, the steering super quick and pin-sharp in its precision, the grip extraordinary. When it all gets too quick the standard carbon ceramic brakes are unerring in their stopping power. Really, you can drive it however you like, neat and tidy and it’ll cover ground with impunity, or exuberant and wanton, the 488 GTB’s limits easily breached with its prodigious output, the various electronic control systems, including F1 Trac, E-Diff, SSC2 (Side Slip Control 2) allowing you to enjoy them. Rewarding, like little else, the 488 is a truly exceptional car.

All those driver aids might be in the pursuit of maximising performance, but they should also help save you from yourself - presuming you don’t switch them all off, of course. There’s traction and stability control, ABS, tyre pressure warning, seatbelt pre-tensioners, driver and front passenger front, and side airbags. There’s none of the lane-changing/keeping, adaptive cruise control found in the latest luxury cars, but then, arguably, nor should there be…

They’re all red, right? Nope. Solid, metallic or 'historical' are the standard paint choices, covering a wide spectrum from yellows, through reds and into whites, greys, silvers, blues, black, and greens. We’d have ours in the historic Rosso Mugello thanks, which is a dark red much like Ferrari’s earliest racing cars. There’s the option of coloured callipers, different coloured wheels and, indeed, Ferrari will paint your 488 GTB any colour you like.

There’s only one, though the level of personalisation means each car is pretty much unique to the person who first specified it.

Fuel economy just isn’t an issue, and, frankly, every litre you pour into it is so, so worth it for the performance the 488 GTB extracts from it. Overall costs might not be what you think, either, as Ferrari offers an inclusive servicing package, while residuals on Ferraris are superb, meaning you can do some man (or woman) maths to justify buying one if you’re not quite in the usual disgustingly wealthy spectrum of the typical buyer.

If the figure below looks a little specific, it’s because it’s been converted from 20,000km. We doubt any do that in 12 months, so the annual check-up will come first.

You know you’re buying a Ferrari, right? So around £183,000 to buy, and easily over £200,000 if you get carried away with the options. Ridiculous as it might sound, it’s cheap, massively so when you compare it to Ferrari’s last mid-engined turbo V8 - the F40. Iconic or not, that old thing wouldn’t see which way the 488 GTB went…