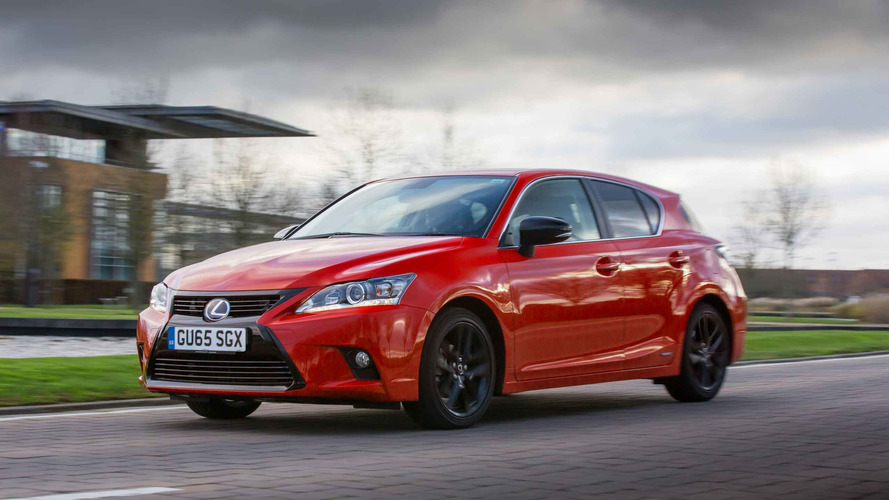 For those looking for a hatchback, with fuel economy in mind.

Lexus revels in doing things a little bit differently, so unlike all the CT 200h’s rivals in the premium compact hatchback class, you’ll not find any diesels or any high-performance versions in the CT line-up. Instead you’ll find a range powered by just one powertrain, petrol-electric hybrid set-up. It makes a lot of sense for economy-minded drivers - and business users with an eye on their tax bill - but the CT 200h in reality is something of a confused character. Lexus hasn’t quite managed to shake off the desire to give the CT 200h a sporting drive to rival its competition, so the stiff, uncomfortable ride is at odds with its otherwise refined character. Hence it's a strange mix, which could be so much better.

Did you know? All CT 200h models are road-tax free thanks to sub-100g/km emissions and hugely tax efficient if your company’s paying for it.

The Lexus CT 200h is a different take on the compact premium hatchback norm, which is no real surprise from Lexus. What would be a surprise (tax reasons aside) is if you picked this over the rather excellent competition from Audi with its A3, BMW with its 1 Series and Mercedes-Benz’s A-Class. Throw in all manner of mainstream rivals, such as the Volkswagen Golf, and it’s even less clear cut, while the CT 200h’s own Toyota Prius cousin covers the green conscience-salving and tax-dodging in an (admittedly wackier-looking) better driving, more competent package. The Lexus been around for a while now too, which, even after its mid-life refresh, means it feels a bit old hat compared to some. Its quirks define it then, but it's a shame that the mostly smooth and economical hybrid drivetrain doesn’t have a chassis mated to it that plays to its obvious strengths, instead Lexus saddling it with a harsh ride that’s hugely to its detriment.

Following the premium compact hatch norm here, by being a two-box hatchback, the CT 200h doesn’t stray too far from convention stylistically, despite its alternative powertrain. It’s been around long enough to have had a serious facelift, so the CT 200h wears the Lexus signature grille, which, if you’ve ever seen the sci-fi film Predator you might find familiar. Lexus didn’t go quite the whole hog with its restyle, so the headlights remain relatively conventional compared with Lexus’ other models. There’s very little to distinguish the base S visually from the range-topping Premier, which is great if you’re at the bottom rung of the Lexus CT 200h buying ladder, but less so if you’ve paid considerably more for the most expensive model.

Choose Sport or Sport+ trims if you want to lose some chrome on that grille and add black wheels and mirror caps, or F Sport if you want some of it back, but with different honeycomb-type grille inserts, two-tone alloy wheels, and a rear spoiler on top of the hatchback. All look pretty slab sided and a touch under-wheeled, though it’ll turn heads by virtue of its relative rarity than anything else. It looks smart enough then, but without that bold grille it’d verge on anonymity, which, given it’s tasked with attracting younger buyers to the brand, or customers from rivals' products, is a bit of an issue.

Given the relatively ordinary looks of the exterior, the interior comes as something of a welcome surprise. Lexus has always had a handle on fine cabins and the CT 200h is no exception, as the materials are all high grade, the fit and finish top notch, too. Refinement at town speeds is very good; with the hybrid powertrain defaulting to pulling away in electric mode it’ll glide around with little or no noise from the engine. Ask it for more speed and the petrol engine comes into play, fairly unobtrusively, but keep asking for more acceleration and the revs flare, which is because of the CVT automatic transmission. Keep it sedate then for the finest refinement.

The biggest issue regarding comfort is the ride quality, which is overly firm. It’s exacerbated by larger alloy wheel choices, but even specifying the smallest wheel possible does little to reduce the harshness of the ride. Given Lexus has gone as far as having an acoustic damper in the boot and special wheel arch liners to keep it quiet it’s a mystery why it has given this not-at-all-sporting hatch a stiff, uncompromising chassis.

The driving position is fine and space up front also accommodating, but that's not the case in the rear, where head- and legroom are a bit tight. In fairness, that’s a criticism that can be levelled at its direct rivals too. The boot, with its volume of 375 litres (including the underfloor stowage area) is competitive for the class; seats folded that volume increasing to 965 litres.

Being a Lexus the technology offering is fairly high with DAB and Bluetooth in all, two USB ports, and an aux-in connection. The rear seat passengers can be entertained enormously, with Lexus offering a range of DVD or iPad packages as cost options if your kids prefer watching Pixar to playing eye spy. All CT 200hs feature a dash-top mounted scree, which, in entry-level models, comes with a fairly simple rotary controller. Satnav is standard on Advance and Sport versions while all come with parking assist sensors front and rear.

Opt for the Premium Navigation and you gain a reversing camera, Online Search, and Google Street View, though it also features Lexus’ incredibly fiddly computer mouse-like controller to operate it all, which looks like a sound idea in theory, but is hopeless in reality. That Premium Nav will also generate a QR code (remember those?) when you reach your destination to scan with your phone to direct you the final leg on foot. Weird. If you like music opt for the Mark Levinson premium audio, as it’s one of the best stereos you’ll hear in a car, and almost worth buying a CT 200h for.

Jump to Running Costs and Economy, as really there’s nothing to see here. Given the CT 200h counts among its rivals the BMW 1 Series, Mercedes-Benz A-Class, and Audi A3, the way it drives is important. And it’s not good news. The engine choice is limited to one, a 1.8-litre petrol unit with Lexus Hybrid Drive. Nothing wrong with that, and, indeed, we rather celebrate Lexus committing so rigidly to its hybrid strategy. It’s relatively quiet, too, moving off in electric guise, which means good refinement around town.

There are various driving modes, including an EV one that’ll push to electric only driving whenever possible, at speeds up to 28mph. The others are Sport, Normal, and Eco; the Eco setting winds back the air conditioning and softens the engine response for maximum economy; while Sport dials up the intensity of the drivetrain and turns the eco meter display in the instruments into a more conventional rev counter. Leave it in Normal and be done with it, as Sport does nothing good, ruining engine refinement, thanks in no small part to the CVT automatic transmission making the engine hang onto revs. Those used to the slickness of German rival autos, the easy torque of their diesel engines, and the smoothness and pace of their turbocharged petrol engines will find the Lexus lacking somewhat in the engine department, not least because it’s only offered in one 136hp output.

The performance might not be scintillating then, but the tax advantages that powertrain bring are more likely to appeal to its intended audience. What’s utterly bewildering is why Lexus feels inclined to equip the CT 200h with firm-riding suspension in some misguided pursuit of sportiness. It’s worse with larger wheel sizes on the F Sport and Sport versions. There’s very little in the way of feedback, and even if there was, the hybrid system doesn’t really encourage you to push it hard. Grip levels are high though, and thanks to that suspension there’s very little body roll, but it’d be a better car with softer suspension and a more relaxed ride; as it stands, the busy, intrusive suspension is absolutely at odds with how it should drive.

Eight airbags feature inside, helping the CT 200h achieve its impressive 94 percent adult and 84 percent child protection score in its five-star achieving 2011 Euro NCAP test. The rest of the safety equipment follows the class norm, including ABS with brake assist and brake force distribution, traction control, stability control, and a tyre pressure warning system. There are ISOFIX child seat mounts in the two outer rear seats, seatbelt pretensioners up front, and whiplash reducing front headrests. For the full level of active safety kit such as Adaptive Cruise Control and Pre-crash safety radar, you’ll need to pay more, and only then with the Premier trim level.

Twelve colour choices are offered, though like most premium rivals there’s a heavy slant towards silvers, greys, and blacks, which makes the Fuji Red and Ultra Blue a nice diversion from the otherwise staid norm. There’s the opportunity to have a two-tone paint finish on Sport models by adding a black roof, though it’s not possible with all the colour choices.

Given the single powertrain, a choice of seven trim levels across a £10,000 price differential from top to bottom is surprising; the line-up runs S, SE, Advance, Luxury, Sport, F Sport, and Premier. All come with satnav, DAB radio, alloy wheels, and Bluetooth connectivity, though you’ll need Advance and above for cruise control, Luxury upwards for leather upholstery, and F Sport or Premier if you want electric adjustment on your front seats.

More tax efficient than an off-shore fund, and legal too, the CT 200h is about as easy a way to minimise your outgoings in the premium market as is possible. The S model has an official combined economy figure of 78.5mpg, reducing to 68.9mpg with the larger wheel choices of the upper grades. Emissions are 82g/km for the 15-inch wheel, 88g/km for the 16-inch wheel and 94g/km for the 17-inch wheel, so there’s more than just a comfort incentive for the smaller wheels, as you’ll save money on fuel and lessen your impact on the environment.

The CT 200h needs an annual service, though reliability is certain to be good, and Lexus always scores high in customer satisfaction surveys.

Compared to some of its rivals, the pricing reach is fairly narrow, starting at around £22,000 and rising to just short of £30,000. With standard equipment already fairly comprehensive you could avoid spending lots on options, too. 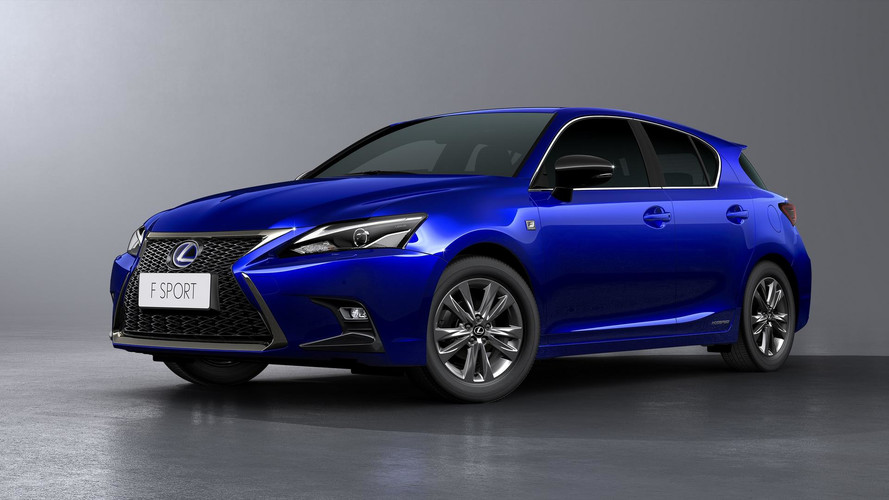