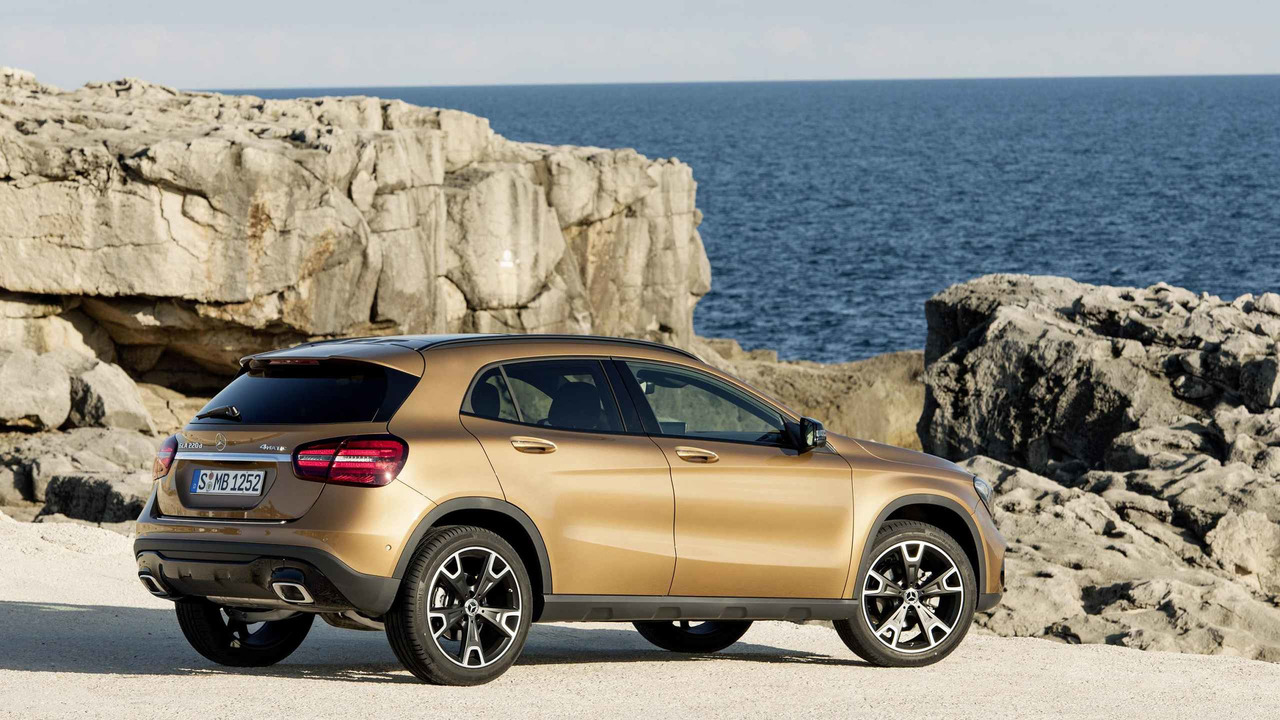 Easy to overlook, but a small SUV to consider in the somewhat competitive market.

Mercedes’ smallest of five SUVs within its fleet, the GLA is designed to take on the Audi Q3 and BMW X1. It has an awful lot in common with the regular A-Class hatchback, and indeed doesn’t look hugely different from the car on which it is based. Mercedes offers the GLA in a simple line-up: there are two diesel engines and two petrol options for the regular cars, with a range-topping AMG GLA 45 functioning as the crossover’s halo product. Drive goes to the front axle on lesser models, with the more powerful GLAs all coming with Mercedes’ 4Matic all-wheel drive as standard. Gearboxes include a six-speed manual or a seven-speed dual-clutch automatic, while specifications are familiar Mercedes and include SE, Sport, and AMG Line.

Did you know? Mercedes collaborated with Nintendo for the GLA’s launch in Japan – and thus it’s the only modern vehicle to appear in the Mario Kart games.

The Mercedes-Benz GLA isn't particularly outstanding in any one area. As a Mercedes, it has a high-quality cabin and it can be specified with plenty of top-end equipment, but to do so will cost buyers quite a lot of money on optional extras – and the GLA isn’t cheap to purchase in the first place. It’s also not a very exciting SUV crossover to drive, nor is the infotainment up to scratch next to rivals like the BMW X2, but it does have a good range of engines including some super-efficient options.

While all Mercedes SUVs are linked to their saloon counterparts by both the use of similar technology and their badging – GLC and C-Class, and so on – they do at least look sufficiently different to the regular cars. The GLA, though, appears to be almost precisely like an oversized A-Class. Glance at one on the streets a bit too quickly and it’s not immediately obvious that it’s the SUV. This, though, is not a dreadful revelation, because the A-Class is a good-looking car and thus the GLA is too. Mercedes ever-so-mildly facelifted it for the 2017 model year, with the bumpers, light clusters, and rear roof spoiler all tweaked to make the car slightly more aerodynamic.

Again, it’s very like an A-Class inside and if you’re looking for a driving position that’s lofty, the GLA is going to disappoint. It feels even more car-like from behind the wheel than it looks from the kerb, and . All models come with 'Artico' manmade leather and the 2017MY update saw new upholstery, trim panels, redesigned cluster dials, and chrome-finish instrument surrounds drafted into service.

Like any Mercedes, it’s a prestige cabin that gives the impression of being shot through with quality, even if some plastics hidden lower down the dash are not of the highest standards – and it has the unusual ergonomics that mean the auto models get a column-shift, counter-balanced by a cluster of stalks to the left of the steering wheel, which are all too easy to confuse for one another in the heat of a quick manoeuvre by those coming from different marques.

Manual adjustment of the seat height, and steering column reach and rake are available on all GLAs, so – aside from offset pedals – the driving position is good, if not as high as other SUVs. Space in the front is ample, but it’s less generous in the rear, while the boot – accessed via a range-wide powered tailgate – is a decent 481 litres. Fold the standard-fit 60:40 split rear seatbacks and that climbs to 1,235 litres, but the seats don’t lie quite flat so the longer boot floor is partially sloped. There are a lot of useful stowage areas on the Mercedes, including two boxes under the front seats, a pair of cupholders up front (and two more in a rear armrest from Sport level upwards), and a compartment underneath the boot floor.

Every Mercedes GLA benefits from a six-speaker sound system with two USB sockets, an SD card slot, at least a 5.8-inch media interface screen (it’s an 8.0-inch item on all bar the SE), and Apple CarPlay support, but DAB is only standard fit on the range-topping AMG 45. And so is Garmin Map Pilot navigation. Also, aside from a 360-degree monitor, the high-end Comand Online infotainment and a 7.1 surround sound Harman Kardon set-up, there are few connectivity options beyond the standard kit.

It looks like an A-Class, so it drives like an A-Class – and this isn’t great news. Mercedes’ most compact machines are comfortable and they make for easy day-to-day companions, but thrilling they are not. The GLA is cut from the same cloth: the grip, body roll control, steering feel, and chassis adjustability are all good, but not exceptional. You can stoke the GLA along at a decent clip and it will feel capable doing so, yet there’s little chance you’ll be smiling broadly behind the wheel.

That’s less true of the AMG model, which at least satisfies the petrolhead with its cacophonous soundtrack, but even that’s not the sharpest dynamic tool going. You’re therefore much better off playing to the Merc’s strengths of comfort and refinement, and sticking with a mid-range diesel with an automatic gearbox to get the best of it.

The problem is that Mercedes hasn’t deigned to introduce its newer 2.0-litre diesel to the GLA family with the facelift, instead sticking with the old 2.1-litre four-cylinder unit. This is fine for motive power – it makes 136hp and 221lb ft in the 200 d, or 177hp and 258lb ft in the 220 d – but it is noisy and coarse compared to the latest turbodiesels. The 200 d comes with either front-wheel drive or with 4Matic as an option, while the 220 d is 4Matic only. If you do go for all-wheel drive, you must have the 7G-DCT automatic transmission; front-wheel-drive GLAs have the six-speed manual as standard.

The diesels have low running costs, but if you don’t do thousands of miles a year you might be better off with a petrol-powered GLA. These units are turbocharged, and they’re smooth and quiet. Choose from a 1.6-litre with 156hp/184lb ft in the GLA 200, or a 2.0-litre motor in the GLA 250, which has 211hp and 258lb ft. Only the 200 can be front-wheel drive and manual.

However, if raw pace is what you really need from your crossover, the Mercedes-AMG GLA 45 is the champ. Its 2.0-litre turbocharged four-cylinder engine was uprated to a colossal 381hp and 350lb ft for 2017MY, leading to a scorching 0-62mph time of 4.4 seconds and a top speed limited to 155mph - or 168mph with the optional AMG Driver’s Package.

The Mercedes GLA was Euro NCAP-tested in 2014 and polled the top rating, with a very high score for adult occupant safety (95 percent). It achieved five stars as a result of an Active Bonnet, seven airbags, Attention Assist driver fatigue monitor, Active Brake Assist with Hold and Hill-Start Assist functions, ESP, two ISOFIX child seat fitting points in the rear, and a tyre-pressure monitoring system. It also has the Lane Tracking Package and Driver Assistance Packages of semi-autonomous technologies as cost options, but while these feature items such as blind-spot warning, Lane-Keeping Assistant, and radar cruise control, there’s none of the self-steering capability added to any of them that can be found on, for instance, the C-Class.

These run SE, Sport, and then AMG Line, with a WhiteArt Edition sitting above the regular range and below the AMG GLA 45, which also comes in the striking Yellow Night Edition.

Sports seats, though, are reserved for the AMG Line, which also gets body styling and 19-inch alloys on the outside, plus leather and Dinamica suede trim inside. Three technology bundles, called the Executive, Premium, and Premium Plus, are available and these bring at least Garmin navigation, heated front seats, and the Parking Pilot kit, plus more on the Premium packs. The SE only has access to Executive, whereas all three are offered on Sport and AMG Line cars.

Finally, the AMG model gets its own comprehensive specification, including (but not limited to) AMG High-Performance Brakes, ambient lighting, satnav, and AMG Performance heated front seats.

Additionally, any regular GLA can be had in WhiteArt Edition spec. It uses the AMG Line grade as a basis, meaning 19-inch alloys, but it also adds black, white-and-grey-striped leather upholstery, ‘Edition’-branded black floor mats, and the Premium equipment line.

The GLA might look a lot like an A-Class, but it is bigger. While the width is the same at 2,022mm with mirrors, it’s longer than the A-Class by 118mm and taller by 61mm.

Residual values are guaranteed to be good, courtesy of both the three-pointed star on the prow of the GLA and its crossover nature, while the diesels are impressively efficient; expect economy of anything from 56-67mpg, with 44-50mpg for the petrol engines and 38mpg on the GLA 45. The emissions ratings lead to Benefit-in-Kind tax of between 21 and 28 per cent for the normal range, and 31 per cent for the AMG, although its insurance is group 40 or 41 for the Yellow Night Edition. All other GLAs are between groups 19 and 30.

The Mercedes GLA has Assyst and so only goes into the garage for maintenance when the car thinks it is ready for it. Overall reliability should be OK, as Mercedes has a good reputation on this score, but the A-Class is not faultless and the GLA is likely to be similarly afflicted. A three-year, unlimited-mileage warranty should provide succour for those interested in the Mercedes SUV.

The Mercedes GLA might be priced well compared to an Audi Q3 or BMW X1, but it seems expensive in a world where the deeply likeable SEAT Ateca and Peugeot 3008 get the job done just as effectively, yet for thousands of pounds less. Entry point of the GLA range is the £25,305 SE 20 manual, while the AMG GLA 45 Yellow Night Edition is almost £52,000. Quite a few models retail at less than £30,000, but in reality, with the sort of spec and drivetrain that’s going to make the GLA feel like it’s worth the premium, the Mercedes is going to be in the ballpark of a hefty £35,000.