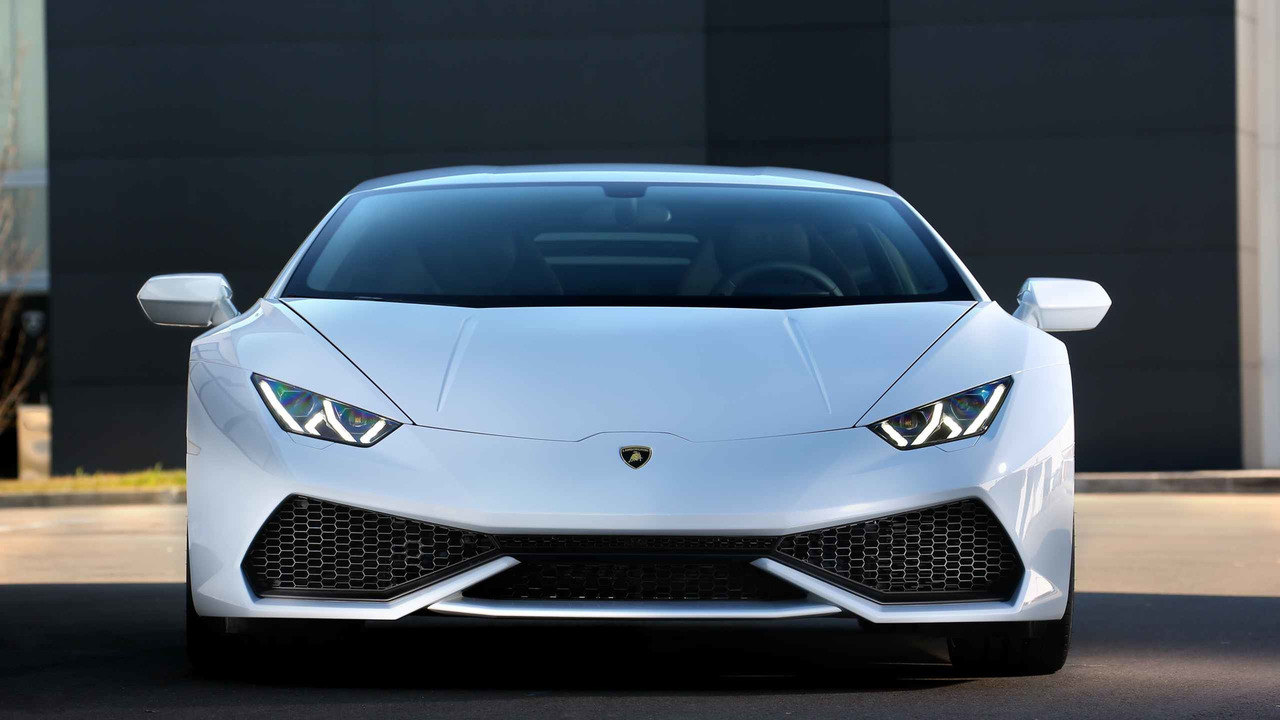 With Gallardo sized shoes to fill

The Lamborghini Huracan is the Italian firm’s replacement for its most successful model ever, the Gallardo. Unsurprisingly then, given that car’s sales figures, Lamborghini hasn’t been too radical with the Huracan, so it pretty much follows the template set by the Gallardo. Hence, a naturally aspirated V10 petrol engine, paddle-shifted seven-speed automatic transmission, and four-wheel drive are all wrapped up in a dramatic wedge-shaped body. The LP 610-4 is the result, that 610 referring to its output in hp, the 4 relating to its drive. The range also includes the LP 580-2, which, if you’re paying attention, means 580hp and a pair of driveshafts left on the stockroom shelves at Lamborghini’s factory. A thrilling small Lamborghini with a sensational engine, it’s got the fireworks to compete with its obvious Ferrari and McLaren rivals, even if it’s not quite the measure of them.

Did you know? The ‘LP’ in the Huracan’s name stands for Longitudinal Posteriore - only in Italian could the engine position description sound sexy.

The Lamborghini Huracan is an entirely predictable replacement for the Gallardo before it, and in isolation it’s a thrilling, visceral car, though one that does come with a few provisos. That it’s based on Audi’s R8 V10 isn’t a problem in itself, though some supercar snobs might take delight in pointing that out to you; no, the biggest issue for Lamborghini is the evolutionary leap that rivals have taken with their models. Against the Ferrari 488 GTB it looks a bit safe, while McLaren’s Sports Series models are able to rival its performance for less money and with more engagement, too. Even so, the Huracan remains a hugely compelling and desirable supercar. On looks alone you’ll struggle not to be writing a deposit for the Lamborghini salesperson, while that naturally aspirated 5.2-litre V10 engine remains one of the most thrilling you can currently buy. There’s a feeling that there’s a bit more to come yet from the Huracan, and that’s definitely the case, as the firm revealed the Performante version at the 2017 Geneva Motor Show. It brings active aero, more power and a sub seven-minute Nürburgring lap time.

You want to make an impact? Then buy a Lamborghini. Ever since the Miura rolled out the gate of Lamborghini’s Italian factory that’s been true, and it’s no less so with the Huracan. It looks sensational, an exotic wedge of pure supercar that’s a riot of lines, shapes and air intakes; indeed, you get the feeling that if Lamborghini could make the wheels and tyres more square-cut in their looks it would. Unlike its V12 Aventador relation it does without ‘Lamborghini doors’, though; well it has doors, and they’re on a Lamborghini, but they open conventionally, instead of upwards. That’s no criticism, as the Huracan is not so short on drama you need to wave your doors in the air. The detailing is sensational, too: the front lights, that low nose, and huge intakes are positively serpentine, its shape full of pent-up energy and absolutely dripping in supercar drama. The air intakes in the wings look like they suck up pedestrians to feed the V10 engine, while the rear is a mass of converging lines and geometrical shapes that mix to create one hell of a dramatic whole. Impact you say? You’ve got it here, and some.

It’s laughable to think you buy a supercar with comfort in mind, but today’s breed is a world apart from those that preceded them. Even the Huracan, a car coming from Lamborghini’s famously bullish stable, is something you could genuinely live with as a daily driver, so long, of course, as you’re prepared to accept a few compromises. The cabin revels in its lack of convention. Like the exterior, the interior is a mix of shapes and lines, to create a dramatic, though workable driving environment. Some find the seats a touch uncomfortable and unsupportive, but there’s the option of different seat choices, so it’s worth trying them before buying. The compromises are, similar to all its rivals, visibility, a firm ride and lots of noise from the engine and road (depending on surface) , but it’s a supercar, right, you’ll likely have a Range Rover or S-Class if you’re after long-distance comfort.

There’s luggage space, just not a lot of it, but then that’s true of all its rivals. Think small squashy bag up front. Just enough for a dirty weekend, though your passenger will have to hold their own drink for the journey, as there’s only the one cupholder. The driving position is fine, even for taller drivers.

Lamborghini is owned by Audi, which means it’s able to cherry pick from the company’s infotainment systems and make them its own. The Huracan incorporates all its tech into the central instrument binnacle in front of the driver (as per Audi’s Virtual Cockpit available on the TT). It’s controlled by a rotary dial. It’s not the most intuitive of systems, but with a bit of time it becomes familiar, if never entirely natural. That driver-centric screen does limit your passenger from doing things like setting a navigation route or changing radio stations, which may or may not be a good thing… There’s Bluetooth and audio streaming, though really the best sounds in the cockpit come from the engine itself. Nonetheless, the Huracan doesn’t feel lacking in tech, if not being at the very cutting edge of it.

A supercar should be all about the engine, and the Huracan doesn’t disappoint. In a world increasingly racing to a turbocharged future the Lamborghini’s naturally aspirated 5.2-litre V10 is a charismatic reminder that not all things new are necessarily better. It’s a phenomenal powerplant, in either 580hp form in the rear-driven LP 580-2 or higher 610hp output of the LP 610-4 four-wheel-drive car. The numbers associated with it don’t really portray the performance it’s capable of producing, as the 0-62mph time of even the four-wheel-drive car bettered by its direct rivals and even some competition in the sports car class, but when you push the accelerator to the floor and get that instant response you’ll not care one bit. It’s a glorious, intoxicating unit, its V10 configuration beautifully exotic, its appetite for revs seemingly endless. The immediacy defines it and the sound it makes when doing so is about as glorious as you’ll ever hear, too.

The transmission’s quick, as well, which is a good thing given the ferocity of that engine’s performance. If there’s a ‘but’ in the Huracan’s make-up it’s the chassis. At least it rides well, the magnetic fluid-filled dampers allowing a ride that’s not compromised despite the Huracan’s focus. Indeed, like its rivals, the Huracan allows a choice of modes via its 'Anima' switch, through Strada, Sport and Corsa: that Strada one is a touch muted; Sport gives you a bit more control, but doesn't fully leave you to it; while Corsa is a full-on attack on the senses that allows you to hustle the Huracan without too much intervention.

The Sport mode should be the one to pick, but there’s still a little bit too much electronic interference from the drive systems, so it feels unnatural, limiting rather than aiding, the electronics lacking the sort of sophisticated free-rein that the likes of Ferrari’s electronic controls offer. The Lamborghini is hugely fast, even so, but there’s always that niggle that the systems know best and are trying to save you from yourself, so the safety net is always in place, rather than waiting in the background, or aiding without hindrance. That’s true in both the four-wheel-drive-car and the LP 580-2, and it's exacerbated if you opt for the Dynamic Steering, which only increases the sense of detachment and artificiality.

If it sounds like we’re being down on the Huracan then forgive us: for many it’ll be about as exciting and engaging a car as they could possibly experience, but if you’ve sampled the best of its rivals it’s impossible to ignore the dynamic shortcomings that the Huracan presents. A mixed bag then, where the enjoyment of that epic powerplant is slightly hampered by Lamborghini’s lack of conviction to mate it to chassis that can really maximise its potential, or at least wind back the driver assistance systems to allow it to. Hopefully the Performante addresses that.

There’s the full complement of airbags inside, ABS brakes, tyre pressure monitoring, and seatbelt pretensioners, while the traction and stability controls should help keep you out of trouble. Forget the sort of anticipatory, autonomous electronic safety systems that are percolating through the premium and mainstream car classes, though, as there’s none of that here, or in any of Lamborghini’s rivals, either.

It’s a Lamborghini, so go wild with your hue; the colour palette on offer as standard is fairly extensive and certainly expressive. Unlike its near neighbours Ferrari you’ll feel no need to adhere to red, and Lamborghinis suit, no demand, that they’re painted a wild colour, and the firm will be only too happy to oblige, even if your favourite is not among its standard colour options.

The differences between the LP 580-2 and the LP 610-4 are fractional when it comes to specification, the expectation being that you’ll spend a good deal of time in the configurator to personalise it anyway. You could live with it in standard specification, but nobody will.

Given the Huracan will probably park alongside a fleet of other sports and luxury cars and SUVs in your sizeable garage you’re not likely to give a second thought to how much it’ll cost to run it. That’s just as well, as it won’t be cheap, but that’s true of any of its rivals, and hardly a surprise for a 200mph, V10-engined indulgent supercar wedge.

You’ll be on first name terms with your dealer, as it’ll need regular and expensive servicing.

The modern supercar is a curious thing, the Huracan offering the sort of ludicrous performance that would once have been in the realm of hypercars. But like that the circa £200,000 you’ll pay for it (after a relatively conservative trip down the options list) looks like a relative bargain.