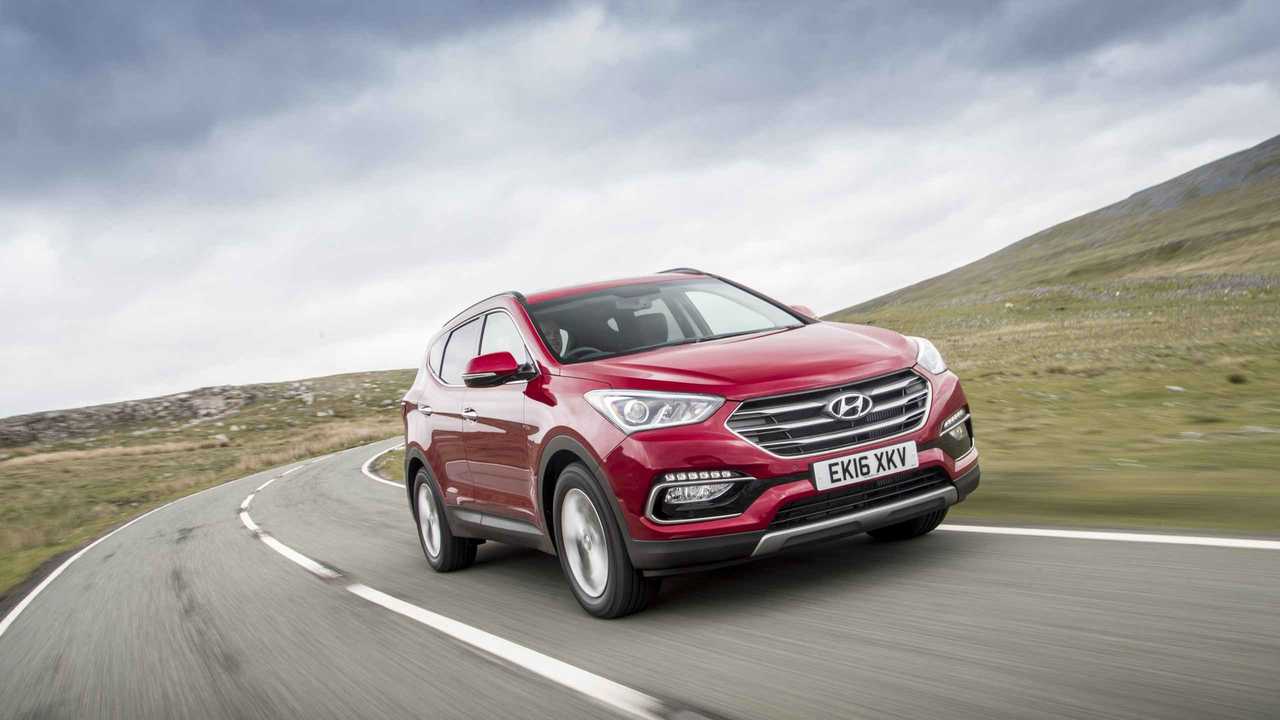 The Santa Fe is an old model despite its young looks, and it's outclassed by newer rivals.

Big, well-made, roomy and useful, the Santa Fe ticks all the expected Hyundai boxes. It operates above its station, though, by also being quite desirable in style, premium in appeal and capable even of snaffling buyers from BMW and Audi on occasion. It’s not bargain priced in the manner of Hyundais of old, though - in fact it looks remarkably expensive compared to newer rivals like the Skoda Kodiaq, Nissan X-Trail and Peugeot 5008.

Did you know? The first-generation Santa Fe was Hyundai’s best-selling global product, but it’s been overtaken since by the Tucson, Accent and i30.

It’s been around since 2012, but the Santa Fe still looks and feels like a modern, sophisticated Hyundai product. Roomy inside, it’s best sampled as a seven-seater, with a pair of occasional folding seats in the boot. The cabin can look a touch cheap and plastic, but it's durable and very well equipped as standard. For all that, the engine is noisy and inefficient compared to the engines on offer in a Skoda Kodiaq, Nissan X-Trail or Peugeot 5008, and it's surprisingly expensive on finance.

Its exterior design is probably the Santa Fe’s strongest hand, and you can clearly see its bluff, American-style influence on smaller models such as the newer Hyundai Tucson crossover. The Santa Fe was updated in late 2015 with a revised grille and lights, LED daytime running lights, and new alloy wheels. The update was pretty successful, because in spite of being quite old now, and in a highly competitive sector, it’s still a fresh-looking vehicle.

It’s also a car that transcends the brand appeal of Hyundai itself, possibly because it looks big and expensive when some of us still expect Hyundai to make only cheap, small cars. The Santa Fe has been successful in bringing new customers to Hyundai, customers who might otherwise have gone on to buy premium German products, and as such it’s responsible for much of the improvement in Hyundai’s brand image in the past few years.

For all that, the newer Skoda Kodiaq and Peugeot 5008 both far surpass it for style and image appeal.

Of course, one of the reasons that the Santa Fe was able to draw so many new customers to Hyundai was its interior, and specifically its optional seven-seat layout. When launched, there weren’t many other mainstream brands offering a mid-size seven-seat SUV, and so Hyundai was able to clear up in sales terms. That market is becoming much more crowded now, so even with the 2015 update bringing with it new instruments, and a new touchscreen and centre console design, the Santa Fe doesn't quite keep up with newer rivals such as the Skoda Kodiaq and Peugeot 5008, both of which have superior interiors in terms of perceived interior quality.

That said, the Santa Fe is no slouch – while there are some cheap fittings in there, the cabin is mostly very successful with solid overall quality and big, comfortable seats.

Space and practicality are, obviously, two of the Santa Fe’s unique selling points and for the most part it delivers well in this respect. There’s good space in the back seats, with sufficient legroom and headroom for even tall passengers to get comfortable, although there are only ISOFIX child seat anchors on the outer two seats, which does limit practicality a little.

Boot space is again good, but a little behind the best that some rivals can offer – for the five-seat version, boot volume is 585 litres with the seats up and 1,680 litres with them folded flat, while for the seven-seat version that shrinks a little to 516 litres and 1,615 litres respectively. Not bad, but there is more space in a Kodiaq or a 5008, and the closely-related Kia Sorento actually has more space than the Santa Fe – 605 litres seats up, and 1,662 litres seats folded in seven-seat form. The rear seats in the seven-seat Santa Fe are, as is so common in this class, really only for occasional use and not really suitable for adults or for kids in full-sized car seats.

All models come with an eight-inch touchscreen with satnav (with postcode recognition), DAB radio, Bluetooth, and USB connection, while you can have Apple CarPlay and Android Auto too. That’s about it though – no Wi-Fi hotspot, no connectivity services, no live news, traffic, or weather feeds. The Santa Fe’s infotainment system has the benefit of being simple and easy to use, but there’s not actually a lot on offer within in in comparison to the very latest models on the market.

Hyundai tweaked the Santa Fe’s chassis for British roads and it shows – while it’s certainly no hot hatch to drive, the Santa Fe feels well-balanced, and the ride quality, although quite firmly damped, is also good. Few passengers will ever complain about comfort levels - in fact, it's a more supple ride comfort than that of the slightly choppy Skoda Kodiaq.

The steering is a bit disappointing, though. Hyundai fits the Santa Fe with its Flex Steer system, which allows you to choose from Comfort, Normal and Sport settings, but in all three modes it’s basically a bit over-assisted, springy in its responses and totally absent of feel and feedback. That probably doesn’t matter to most customers in fairness, and they’ll be happy that the Santa Fe feels stable and surefooted on the road, helped in poor weather conditions by standard-fit four-wheel drive.

The only engine available is Hyundai’s familiar 2.2-litre turbodiesel four-cylinder unit, which is mostly fine in performance terms, but it’s a touch slow to spin up the turbo, and the optional automatic gearbox is not great, so avoid that. It's noisy by comparison to newer rivals, too.

Creamy White is the only solid paint colour, and the rest are all metallic: Sleek Silver, Mystic Beige, Mineral Blue, Titanium Silver, Ocean View, plus Red Merlot, and Phantom Black in a pearl finish. It's a much better colour selection than you get on the Kia Sorento, and helps to make this a more stylish offering in general. Black leather seats come as standard, but you can have beige leather as a no-cost option.

There are only two trim options for the Santa Fe - Premium and Premium SE - but both are very well equipped as standard.

It’s not the biggest car in its class, the Santa Fe, but chunky enough that you’ll want to take care in tight spaces.

The combination of a relatively high kerb weight, a powerful 2.2-litre diesel engine, and standard-fit four-wheel drive makes the Santa Fe noticeably more thirsty, and worse off for emissions, than its newer rivals. Taken in isolation, 46.3mpg and 161g/km of CO2 don’t look all that  bad for a big 4x4 seven-seater, but the arrival of competitors such as the Peugeot 5008 and the Skoda Kodiaq, which can easily beat 50mpg (thanks in no small part to being predominantly front-wheel drive, it must be said) is showing the Santa Fe up rather badly.

Things get worse when you look at the automatic option. That pushes fuel economy down to 42.2mpg and emissions up to 177g/km, so considering that it also acts as a drag on performance, it’s best avoided.

Here’s where the Santa Fe scores big. The current model has never had a major recall, and Hyundai’s reputation for reliability and quality is close to unmatched. Plus, it’s backed up by a five-year, unlimited-mileage warranty for all models, which includes five years' roadside recovery, a free annual vehicle health check, and a 12-year anti-perforation warranty. You can pre-pay for a fixed service plan over two, three, or five years up to 50,000 miles, as well.

Hyundai, of course, has built a reputation on – at first – offering bargain prices and – more recently – offering prices similar to other brands, but with better equipment. The Santa Fe is, unusually, an expensive option in this class. Even factoring in that standard kit, you can spec a range-topping Skoda Kodiaq SE L 4x4 DSG 2.0 TDI 190, add a panoramic sunroof and still save thousands over the Hyundai. Even more surprising, finance estimates suggest that the Hyundai will be expensive on PCP. Put down a £3000 deposit on a 36 month contract for a 7st Premium and you're looking at over £600 per month. An equivalent Skoda Kodiaq, Nissan X-Trail or Peugeot 5008 will be closer to £400 per month.  That's before you consider that those same rivals can be had for far less cash if you can live with a bit less equipment and front-wheel drive; an option that the Hyundai doesn't even cater for.