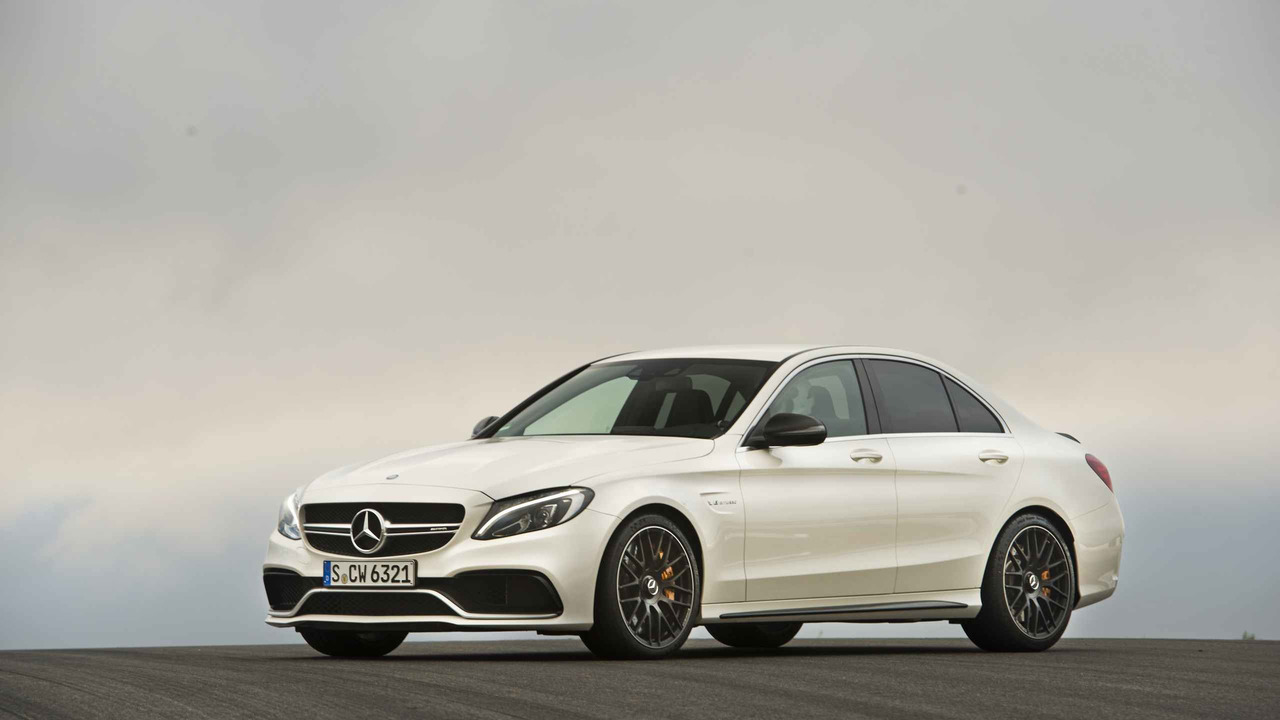 The C-Class, with an AMG twist.

The Mercedes-AMG C 63 is the company’s go-faster version of its junior executive C-Class. Powered by a tumultuous 4.0-litre V8 biturbo engine and sending drive exclusively to the rear axle via a seven-speed AMG automatic transmission, this is a seriously rapid and engaging performance car. It can be specified in all four of the C-Class’ body styles (Saloon, Estate, Coupe, and Cabriolet) and if you don’t feel the 476hp variant is quick enough, there’s a lunatic C 63 S offered that delivers a fantastic 510hp.

It’s been a long time coming, but the BMW M3 (and, by extension, the M4) has finally been deposed – and the usurper is the Mercedes-AMG C 63. The C 63 isn’t just class champion by default, the ‘best of the rest’ in the absence of a properly rounded M3/M4; it’s actually just an utterly superb supersaloon, with a phenomenally well-judged chassis, an absolutely epic soundtrack, and yet all the civility and quality you’d expect of a ‘practical’ performance vehicle. Cheap the Mercedes is not, yet this could very well be the finest all-round sports car on sale right now – it really is that good.

There is little chance anyone will mistake the Mercedes-AMG C 63 for a regular C-Class. All cars receive large alloys (18 inches on the C 63, 19s on the C 63 S), a lower body kit incorporating a gaping front air dam and quad exhaust pipes at the rear, power strakes on the bonnet, and massive, flared wheel arches. Subtle badging on the boot lid and the front wings – where it reads ‘V8 Biturbo’ – completes the look, although the Edition 1 Coupe is even harder to miss, as it wears body decals, black alloys, and the AMG Aero kit plus Night Package. The Cabriolet comes in Edition 1 guise too, although it’s a little more restrained than its hard-topped brother.

AMG-specific dials, sports seats in the C 63 (and more sculpted Performance seats in the C 63 S and Edition 1 vehicles), and an AMG-branded three-spoke multifunction steering wheel all help to make the cabin feel that little bit special compared to a regular Mercedes. And as the C-Class has a fabulous cabin anyway, the C 63 only polishes the brilliance that’s already there. All C 63s get genuine Nappa leather upholstery clothing the seats, which is a premium touch.

The Coupe and Cabriolet models are strict four-seaters, so they’re not the most practical cars. All C 63s have 40:20:40 split rear seatbacks, though, which boosts their usefulness somewhat. The C 63 Cabriolet has a smaller boot than a BMW M4 Cabrio with all seats in place, the Mercedes toting 355 litres, but because it uses a fabric hood it’s much more capacious with the roof stowed – 280 litres on the C 63, versus 200 litres on the M4. The Coupe also has a 355-litre cargo area, while the Saloon holds 435 litres. Best of all, of course, is the Estate, with 490 litres with all seats in place and 1,510 litres with the rear bench folded away.

All C 63s have the Stowage Package, two cupholders in the front, a centre armrest concealing a storage compartment, and – more usefully – electrically adjustable seats and steering column are standard fit on the Mercedes-AMG cars, so the driving position should be tuneable to suit all sizes of people.

Mercedes’ Comand Online set-up – including hard-disk drive 3D navigation, voice control, live traffic updates, Speed Limit Assist, a WLAN-hotspot, and 10GB of MP3 storage space – is normally a cost option, but all 10 C 63 variants have it as standard. They also benefit from Bluetooth, DAB, a larger 8.4-inch high-resolution display screen on the dashboard, full Mercedes Me Remote connectivity, two USB ports and an SD card slot in the front, and speakers with Mercedes’ patented FrontBass system. About the only option here is a Head-Up Display.

The ‘standard’ C 63 has 476hp and 480lb ft. Driving the rear wheels through a seven-speed AMG Speedshift MCT gearbox, performance is scorching – the Coupe takes just four seconds to hit 62mph from rest, the Saloon is close behind at 4.1 seconds, and the Estate and Cabriolet both take 4.2 seconds.

As standard, the C 63 has the AMG High Performance Brakes with silver callipers, three-mode switchable AMG Ride Control Suspension, AMG Dynamic Select drive modes, and three-stage, speed-sensitive Sports steering. All of this technical goodness equates to a car that’s simply brilliant to drive – it’s a real pussy cat for day-to-day duties, proving benign enough in its less intense driving modes to use safely in poor conditions, and it has a ride that’s firm yet comfortable at all times. And then, when the mood takes you, the C 63 can transform into a wild tiger of a car, bellowing along straights and hammering into curves like something lither and more limber than its minimum 1,785kg kerb weight would suggest. Unlike the M3/M4, the Mercedes is always thrilling to drive, but not utterly terrifying in the damp.

So the 476hp C 63 is more than enough car for most, but of course there’s the 510hp/517lb ft C 63 S if you feel you need more. This switches the C 63’s mechanical differential lock for an electronically controlled item, while the brake callipers are now red. And it’s every bit as brilliant as the 476hp car, only a bit quicker – all models trim a tenth off the 0-62mph time, meaning the C 63 S Coupe is sub-four seconds for the benchmark sprint. In one respect, though, it doesn’t matter which output you have – that 4.0-litre biturbo V8 sounds absolutely mega, with a real baritone gargle to it throughout the rev range.

All cars are limited to 155mph, but an AMG Driver’s Package can lift that to 180mph. Carbon ceramic brakes, a louder Performance exhaust (for the Saloon and Estate, as the Coupe and Cabrio have this as standard), and the AMG Aero package are all options, although the Edition 1 cars are worth checking out as they have many of these feature included in their list prices. The long and short of all of the above is: it doesn’t matter which C 63 you choose, they’re all fantastic.

It’s no surprise the C-Class has a five-star Euro NCAP safety rating. The C 63 might be a high-performance car, but it doesn’t scrimp on the potentially life-saving gear, coming with an Active Bonnet, Adaptive Brake Assist with Hold and brake-drying functionality, Attention Assist (a driver fatigue monitor), Collision Prevention Assist Plus, seven airbags, ESP, two ISOFIX mounting points in the rear, and a tyre-pressure monitoring system as standard. It also has some fancy parking features, like a reversing camera, and Active Parking Assist with Parktronic automated parallel and perpendicular capability.

Then there are two packs of semi-autonomous hardware. Lane Tracking Package is the basic bundle, collating Blind Spot Assistant and Lane Keeping Assistant (they’re both warning systems only). Step up to Driving Assistance Package and both these features become ‘active’ (i.e. the car will steer/selectively apply the brakes if it thinks you’re about to veer out of lane unintentionally, or if you’ve got your indicators on and you’re about to switch lanes with something in your blind spot). DAP also brings BAS Plus braking with Cross-Traffic Assistant, Distronic Plus adaptive cruise control with a self-steering function and Stop&Go Pilot, Pre-Safe Brake with Pedestrian Detection, and Pre-Safe Plus – this last one prepares the car, via a number of means, if it senses something is imminently about to smash into the back of the C 63.

The Coupe and Cabriolet are slightly different, as they cannot be specified in Designo Hyacinth Red. However, there’s an additional colour called Designo Cashmere White offered for the Cabriolet alone. Additionally, the Cabriolet’s roof comes in four colours: Black, Dark Brown, Dark Red, and Dark Blue.

Each car comes in ‘regular’ trim and then has a more powerful, better-equipped ‘S’ version above it. Additionally, the Coupe and Cabriolet could – for a limited time after launch – be specified in eye-catching Edition 1 garb.

The 476hp C 63 comes with everything you’d find on an AMG Line C-Class, plus a bit more besides. Highlights are AMG sports seats, dual-zone climate control, Speedtronic cruise control with a variable speed limiter, LED lights all round, auto lights and wipers, and electronically adjustable, power-folding, and heated door mirrors.

Moving up to the S obviously brings the additional 34hp and 37lb ft, as well as more heavily sculpted AMG Performance seats, and the same three-spoke multifunction AMG Sport steering wheel, but with Dinamica suede to go with the Nappa leather of the regular C 63’s tiller.

Finally, Edition 1 spec is only for the Coupe and Cabriolet, and it commands either an £8,800-plus or a £6,000 premium on the equivalent C 63 S versions, respectively. Both cars benefit from black-finish 19-inch front, 20-inch rear alloys, the AMG Night Package, the LED Intelligent Light System, exterior styling accoutrements, AMG carbon fibre interior trim, and the Burmester surround sound system.

The Cabriolet Edition 1 has a slightly less fulsome specification, with keyless entry and keyless start, plus two-tone black/saddle brown Nappa leather. The Coupe, though, gets more. It comes with the AMG Aerodynamic Package, the AMG body decals on the bonnet, roof, boot, and side sills, contrast yellow stitching on the seats and steering wheel within, and full Keyless-Go connectivity. You can go even further with the Motorsport Package, which puts yellow highlights on the black alloys, plus it fits the AMG carbon ceramic brakes and the Designo Selenite Grey Magno paint.

All AMG C 63 models are slightly longer, wider, and lower than their regular C-Class counterparts. The Estate is the biggest car physically, although bear in mind the Coupe and the Cabriolet are the widest across their bodies (excluding door mirrors) at 1,877mm – the Saloon and Estate measure 1,839mm.

All C 63s are in the highest 37 per cent Benefit-in-Kind bracket, they sit in insurance groups 47-50, and they have high emissions leading to expensive road tax. Also, don’t figure on anything more than 32-34mpg from any of them. The only saving grace regarding the running costs of a Mercedes-AMG C 63 is that it is a hugely desirable car with robust residual values of around 50 per cent after three years of ownership.

Only launched in 2015, it’s a bit too soon to call reliability on the C 63, but, after some ropey years in the 1990s, Mercedes is once again a brand you can rely on – and the C 63 is one of its high-end products, made to rigorous standards. All Mercedes cars come with a three-year, unlimited mileage warranty and they also have the Assyst condition-based servicing system, in which the car tells you when it requires maintenance. Service care plans that spread out the servicing costs over monthly payments are available on the C 63.

For its performance and practicality, the Mercedes-AMG C 63 is competitively priced. OK, it’s more money than a BMW M4, but it’s also more powerful than that car, and at the other end of the scale it’s considerably cheaper than equivalent power/specification Porsche 911 or Jaguar F-Type models. The range starts at a little more than £62,000 for the C 63 Saloon, climbing to almost £80,000 for the C 63 S Cabriolet Edition 1.