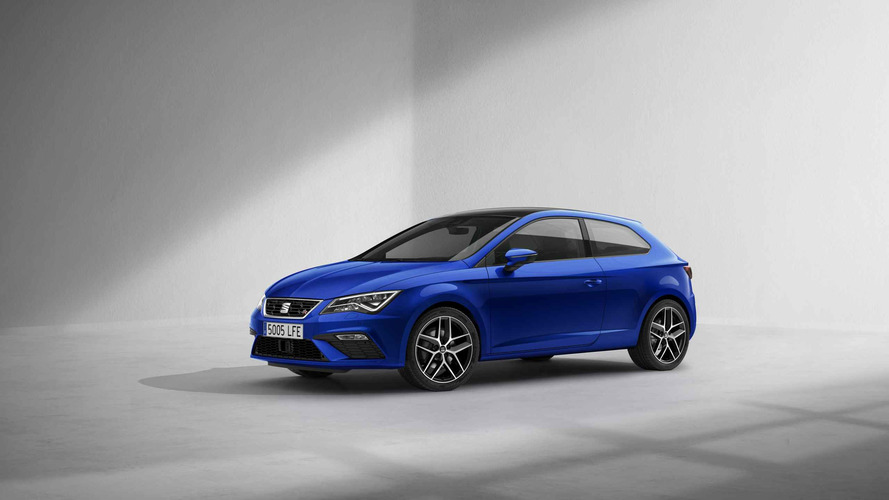 A hatchback disguised as a coupe

This is the Seat Leon SC. In essence a three-door hatchback that would normally sit in the fiercely competitive family car market populated by the Volkswagen Golf, Ford Focus, Vauxhall Astra, and many other big-hitters. Seat’s clever trick is instead to classify this Leon as a coupe. That puts it up against affordable sports cars like the Toyota GT86/Subaru BRZ, Volkswagen Scirocco, and Audi TT. In such rakish company, its attractive but upright styling might put some buyers off, but the truth is that the Leon SC offers a sharp drive coupled to plenty of practicality and competitive pricing.

Did you know? SC stands for Sports Coupe, which is how Seat distances this particular Leon from simply being a three-door hatchback.

Seat’s transformation from the Volkswagen Group’s youthful but budget arm into arguably one of the best all-round mainstream marques today was down in no small part to this third-generation Leon. Thanks to edgy styling and being based on the group’s ubiquitous MQB chassis, the sheer quality of the 2012 Leon was a quantum leap on compared to its predecessors. Better still, it proved capable of mixing it with both the C-segment hatchback elite – including the Volkswagen Golf, the car it shares so much with – and a glut of affordable sports cars. After a facelift in early 2017, the Leon SC is as deeply impressive as ever. The entertaining SC, while lacking the ultimate practicality of its five-door sibling, therefore remains one of the finest cars in its sector.

We could make the argument that the Seat Leon SC’s fabulous, chiselled looks are its USP – if it weren’t for the fact that it is incredibly strong in several other departments too. So successful was the MkIII Leon’s angular styling that it was barely altered for the 2017MY updates and its appearance has gone on to influence two of the Spanish company’s key models since: the Ateca SUV, and the fifth-generation Ibiza supermini, which is to all intents and purposes a shrunken Leon.

It’s worth bearing in mind that Seat wants customers to believe the three-door is markedly different to the five-door Leon, a fact perhaps borne out by the SC having a shorter wheelbase than the ‘proper’ hatchback version. This, claims its maker, results in a Leon that’s more agile than its stablemates. There is also alternative treatment of the rear-window line that makes for subtly tweaked proportions on the Leon SC.

While Seat benefits from the huge repository of know-how and parts available to it courtesy of the Volkswagen Group, if there’s one area where the Spanish cars remain behind their German counterparts, it’s interior finishing. There is nothing wrong with the layout of the Leon SC’s dashboard, as the major controls are sited in a perfectly rational manner, and indeed the way everything fits together and feels solid is also fine. The issue is the complete lack of visual flair. If Seat is serious about suggesting the Leon SC is a viable rival for the Audi TT, then the cabin should be far more interesting to look at than a fascia that appears to be lifted out of a mid-spec Golf from 2010. Odd splashes of chrome and piano black trim are not enough to make this a cockpit that will draw appreciative noises from occupants.

It has no less capacious a boot than the five-door hatchback Leon, the SC’s cargo area rated at 380 litres. Despite lacking rear doors, four adults should fit on board easily and access to the back seats isn’t too difficult. Two ISOFIX child seat fittings are provided in the rear and the back seats also split 60:40, although they don’t lie flat with the boot floor once folded.

Seat’s decision to trim down the Leon SC range to just one specification means a lengthy equipment list as standard. Expect full LED lights outside and an eight-inch touchscreen infotainment system called Media System Plus within – this incorporates clear and attractive 3D mapping for the satnav, voice recognition, USB and SD ports, Bluetooth, DAB, and eight speakers through which to play music. Optional Seat Sound is inexpensive to buy and yet it adds 10 speakers and a boot-mounted subwoofer for an impressive audio performance.

Lively performance is assured by the entirely turbocharged range of engines, as even the least powerful Leon SC is capable of 0-62mph in 8.9 seconds. There are two capacities of TSI petrol engine, of 1.4- and 1.8 litres, the former of these producing 125hp, or 150hp with Active Cylinder Technology as well, which shuts down two of the Leon’s four cylinders to save fuel when possible. The 125hp unit comes with a six-speed manual gearbox only, whereas the 150hp motor can be optionally specified with a seven-speed DSG dual-clutch automatic.

Above these is a fine 1.8-litre TSI rated at 180hp, again available with either the manual or optional DSG auto, but if you need more punch than the 150hp 1.4 then we’d advocate looking at the diesels (or the specialist Leon SC Cupra of course). There’s just one diesel unit offered, the 2.0-litre TDI, but like the 1.4-litre petrol, the diesel is available with either 150hp or a fulsome 184hp and 280lb ft of torque; this latter specification is the motor that powers the Volkswagen Golf GTD hot hatch. Only the 184hp TDI can be fitted with DSG, although in this instance it’s a six-speed gearbox.

It’s not just strong and smooth engines that define the Leon SC’s superb dynamics, though, as the MQB chassis provides excellent driving manners. The Seat gets the XDS electronic front differential as standard and it provides the front axle of the Leon with real bite. The steering is nice and direct, while the brakes are strong and the body control first-rate due to sports suspension. The SC certainly drives more sweetly than anything else with the same underpinnings, such as the Golf, Skoda Octavia or even Audi A3, and yet it’s perfectly quiet, comfortable, and civilised the rest of the time – although steer clear of the 19-inch optional alloys if you can, as they spoil the ride comfort.

High scores for both adult protection (94 per cent) and child protection (92 per cent) contributed to the Leon picking up the full five-star Euro NCAP rating, bolstered by good figures for both pedestrian safety (70 per cent) and safety assist systems (71 per cent). Seat took the opportunity afforded by the midlife facelift to introduce some extra safety tech that wasn’t previously available on the Leon SC, in the form of Traffic Sign Recognition and Traffic Jam Assist – the latter taking control of the car in heavy traffic conditions at speeds of up to 37mph.

All Leon SCs come with seven airbags, ISOFIX points in the outer two rear seats, ABS, electronic stability control, hill-hold control, Front Assist radar monitoring with pedestrian protection, and the company’s clever Multi-Collision Braking System. This, in the event of a collision that triggers the airbags, automatically activates the brakes to prevent or mitigate any subsequent impacts the car might have with road furniture or other traffic.

Safety options include a driving assist pack with automatic high beam functionality and Lane Assist, Adaptive Cruise Control, and an alertness monitor that warns the driver if the car thinks they are showing signs of fatigue.

This couldn’t be simpler: there’s just one, the FR Technology. Seat UK has decided that because this is a coupe, it should only be offered in sporty, high-end specification to suit. To that end, what you get with the SC is a bulging standard equipment list, including a discreet body kit, 17-inch alloys, cruise control, dual-zone climate control, sports seats, a flat-bottomed steering wheel, and Seat Drive Profile multi-mode settings.

Choose the 1.4 EcoTSI manual and opt for a bright body colour to show off the crisp external lines. Treat yourself to a few luxury extras, like Seat Sound, the panoramic sunroof, keyless entry and go, and part-Alcantara front chairs, while you’re at it.

Unless your garage is designed for an Austin A40, the compact Leon SC should fit in no problem. Electrically folding door mirrors are standard equipment, so the width measurement below is accurate if you want to check the size of the aperture on your outbuildings.

All Leon SC models, bar the 1.8-litre TSI (55mpg), are officially able to achieve more than 60mpg, with the 150hp diesel potentially able to deliver in excess of 72mpg. Emissions that are no higher than 120g/km on all cars except the 1.8 take best advantage of the revised road tax laws, meaning £160 VED in year one and then £140 annually thereafter. Residual values are improving, as Seat’s UK sales increase and the perceived quality of the marque’s products goes up.

So confident is Seat in the reliability of the Leon SC that it will offer extensions to the standard three-year/60,000-mile warranty, up to a maximum of five years/90,000 miles. Fixed-price servicing packages are available for one-off lumps sums or monthly fees, while regular servicing prices are reasonable.

The Leon SC 1.4-litre TSI 125hp FR Technology starts from a tad in excess of £19,000, but most variants are comfortably into the lower to mid-£20,000s bracket. The most expensive model is beyond £25,000, which might seem a lot, but as the SC is considerably cheaper than an equivalent Audi TT or Volkswagen Scirocco, while the options list is modest and reasonably priced, the Leon starts to look like a bargain. 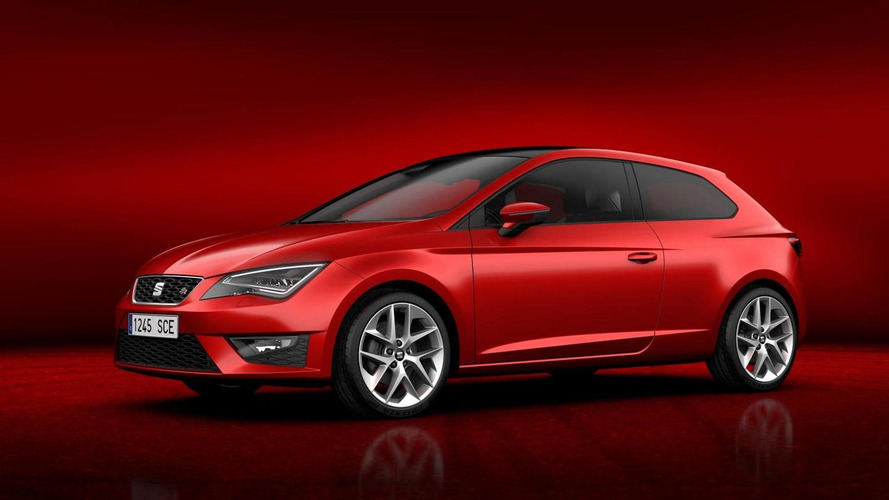