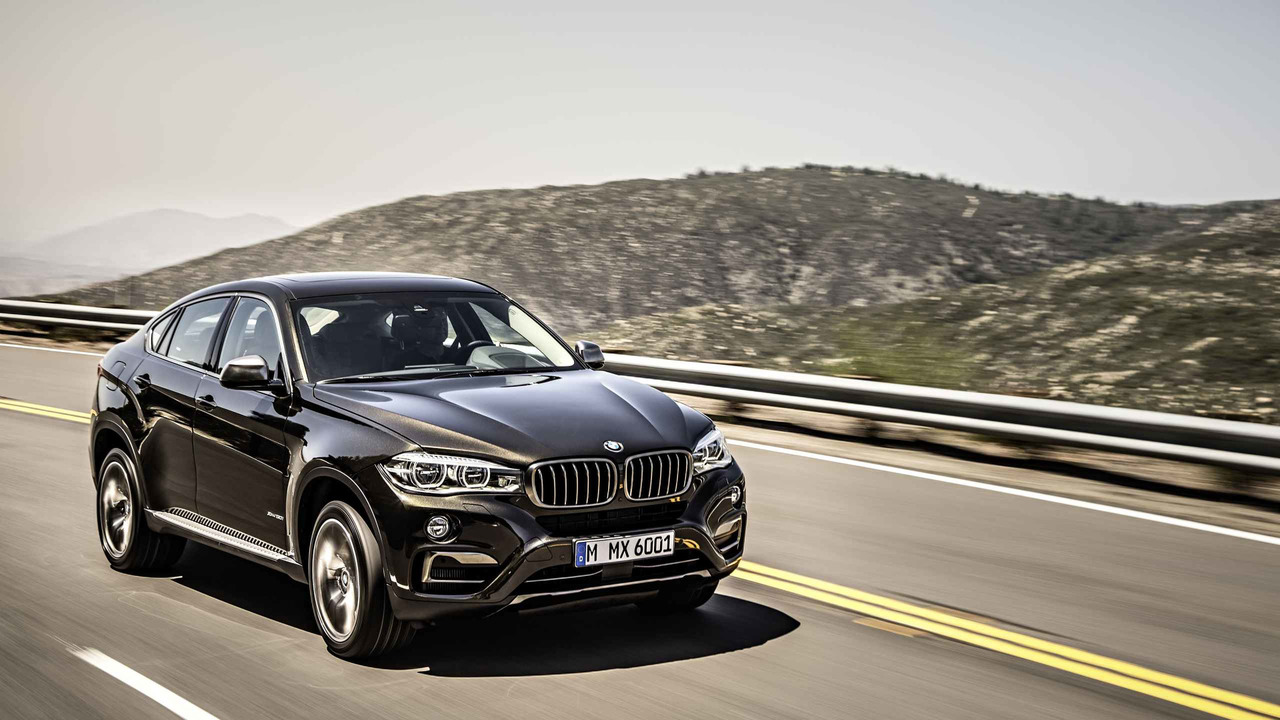 Dividing the line between coupe and SUV.

The BMW X6 is the German company’s flagship SUV, offering a sportier drive than the X5 on which it is based. It was the originator of the ‘coupe-SUV’ concept when it launched in 2008 and it proves ever-popular in the sales charts, despite its challenging appearance. The UK model line-up of the second-generation X6 comprises high-powered, turbocharged engines. There are three six-cylinder diesels and two V8 petrols, with two dedicated performance variants – the M50d and the mighty X6 M. All models use xDrive four-wheel drive and the engines are universally hooked up to an eight-speed automatic gearbox. Furthermore, the ‘regular’ range of X6s, excluding the M50d and X6 M, can only be specified in M Sport trim, as befits the SUV’s dynamic focus.

Did you know? The man who styled the original X6 – and X5 – was Pierre Leclercq, who left BMW M in 2013 to join Chinese brand Great Wall as VP of Design.

The BMW X6 is, and will always be, something of an acquired taste. Its 'coupe' styling is the very thing that makes it difficult to swallow for many people, and the fact it is less useful and more expensive than the superb and much less controversial X5 on which it is based seems to be a strange move by the German company. But the people who do sign up to the idea of a rakish SUV adore the X6 and thus it sells brilliantly. So when you factor in strong engines, a classy interior, excellent refinement, a shedload of toys, good safety equipment, and a chassis that does its level best to disguise the massive bulk of the X6, you have to admit this is a highly relevant and capable BMW.

If there’s one area of heated discussion about the BMW X6, then it’s the exterior appearance. The X6 is not to all tastes – including ours, regrettably. It’s just a bit too big and imposing to pull off the coupe roofline, whereas its smaller X4 sibling just about gets away with it. However, prior to the X6’s arrival in 2008, no one else was doing anything like the divisive BMW and it has certainly not lacked for buyers since – it went past a quarter of a million global sales within just seven years of being on sale. The second-gen is, admittedly, nicer to behold than the original, while the decision to stick with M Sport trim only means all models get big alloys and muscular bodywork.

Inside, there's an identical dashboard arrangement to the X5 and as the X6 is one of BMW’s most premium products, the quality of the fixtures and fittings is excellent. Leather upholstery is standard across the board and you can have it finished in a variety of different colours, including some two-tone options. There’s also an Alcantara/leather choice if you so desire, while heated seats and dual-zone climate control are features for all X6s - and, further, a heated steering wheel and ventilated front seats are reasonably cheap options – ensuring maximum passenger comfort throughout the year.

The original X6 was a strict four-seater, with two sculpted outer rear chairs and no middle seatbelt, but BMW has made a U-turn on that for the second-gen car. However, given the relative lack of headroom in the rear and the high centre squab of the bench, adults would not want to be sat in this fifth seat for long. Indeed, all the rear-row occupants will find the X6 a bit tight if they’re people of the tall persuasion.

For the driver, rear visibility is very poor, thanks to the high deck at the back of the car and that tiny glass rear-screen, so parking sensors are standard on all models. The boot’s more useful than it might at first look, capable of swallowing at least 580 litres and up to 1,525 litres with the 40:20:40 split rear seats folded away, but of course that’s some way behind the outright 1,870 litres the cheaper X5 holds.

At least getting a good driving position will be easy enough, as full electric adjustability of the seat and steering column is standard on all X6 models, and there are plenty of useful cabin storage cubbies as well, so the big BMW is not without its practical merits.

The BMW X6 is new enough that it is incredibly well specified on this score, with standard equipment including BMW Professional satnav, a reversing camera, Bluetooth, Wi-Fi preparation, BMW ConnectedDrive services, and a BMW Advanced loudspeaker all thrown in. Upgrades include a Harman Kardon 600-watt sound system (it’s also one part of the M Sport Plus Package), a Head-Up Display, Apple CarPlay preparation, a digital cockpit for the instrument cluster, Park Assist automated parking functionality, a surround-view camera, Online Entertainment, wireless phone charging, and a TV tuner as well.

Full in-car audio-visual performance is assured by the Rear-Seat Entertainment Professional pack, and there’s an astonishing Bang & Olufsen Advanced surround sound system with 16 speakers, a nine-channel amplifier, and 1,200 watts of power if you're willing to pay the high price.

The X6 is definitely a bit sharper to drive than the X5, although we wouldn’t say by enough to make the coupe model a no-brainer for the keener motorist. The BMW X6 keeps itself in good order during spirited cornering, resisting understeer and marshalling the mass of its giant body well. The steering could do with some more feedback, while repeated heavy braking will see the discs start to give up the ghost with notable fade, but for most normal road situations the X6 has a commendable chassis. It’s also incredibly refined as a cruiser, which is of much more value to its owners than its ability to go haring around corners, rubbing its door handles on the ground.

What cannot be faulted is the performance of the X6, because it comes with a strong selection of engines that deliver anything from 258hp right the way up to a gobsmacking 575hp. There are ‘three’ diesels, although in terms of swept capacity and configuration, it’s just one lump – a 3.0-litre inline six. What you essentially do is choose whether you want one, two, or three turbochargers on your X6 oil-burner.

The petrol versions are even quicker, despite the 4.4-litre biturbo V8 xDrive50i being down on torque compared to the M50d – it generates 480lb ft. However, 450hp makes up for that deficit and so it can sprint to 62mph from rest in 4.8 seconds; like the 50d, it’s limited to 155mph. That’s remarkable stuff for a big machine, but the ultimate speed crown goes to the unhinged X6 M: it, too, has a 4.4-litre biturbo V8, only with wild outputs of 575hp and 553lb ft. Performance is scarcely credible – this ginormous brute will thunder from 0-62mph in just 4.2 seconds, despite weighing 2,265kg. That’s devastating pace for an SUV.

The X6 has never been officially Euro NCAP tested and, weirdly, neither has the current version of X5, but there’s no reason to doubt these large, solidly-made SUVs would achieve the five-star grade if they were put through their safety paces. All models come with airbags, DSC+, the added traction of four-wheel drive, and the Driving Assistant suite of electronic aids – Forward Collision Warning, Pedestrian Detection, and Lane Departure Warning – as standard. Options include radar cruise with Traffic Jam Assistant, speed limit display, adaptive (LED) headlights with High-Beam Assist, and even a Night Vision function – although this last item isn’t cheap.

For the two diesels and V8 petrol in the X6 range, there’s one solid, ‘free’ colour, five metallic cost-option shades, and four Individual hues. Alpine White is the default for an X6, with the metallic options made up of Carbon Black, Space Grey, Black Sapphire, Mineral White, and Flamenco Red. The Individual colours are Pearl Silver, Pyrite Brown, Ruby Black, and Azurite Black.

The M50d and X6 M, classified as halfway-house M Performance and full-on M cars respectively, benefit from a slightly different palette. Space Grey, Flamenco Red, Pearl Silver, and Ruby Black are not available, but all the other colours are – and metallic, non-Individual finishes are now no-cost options for the performance models. Furthermore, the M50d and X6 M can be painted in four colours bespoke to them, which are (all metallic) Silverstone, Melbourne Red, Long Beach Blue, and Donington Grey.

Low take-up of the SE specification X6 means BMW no longer offers the big coupe SUV in anything other than M Sport guise. The M50d and X6 M get their own bespoke equipment specifications, but in essence every X6 will have Adaptive M Suspension, an M leather steering wheel, sports seats in the front, and 20-inch double-spoke M alloy wheels, although keyless entry and exit is an option even on the phenomenally expensive X6 M.

Make no mistake, this is a huge vehicle. It’s nearly two metres across the bodywork, excluding the door mirrors, and that sloping roof does not alter the fact it is tall.

Don’t for a minute think that fastback rear and the sporty focus makes the X6 either a) significantly lighter than an X5 or b) more aerodynamic. It’s just as bad, if not worse, on fuel as its more upright SUV brother, with every X6 weighing comfortably in excess of two tonnes without so much as a driver on board. The quoted fuel economy figures of the diesels look respectable, considering the X6’s size and its mammoth performance, with the trio capable of anything between 43mpg and 174g/km (M50d), and more than 47mpg with 159g/km CO2 (xDrive30d). The petrol models are less impressive – the 50i will do no more than 29mpg with 227g/km CO2, while the X6 M is supposedly capable of 25mpg and 258g/km, which makes both cars punitive for VED costs, especially as the entire range is above the £40,000 threshold for the ‘rich tax’ under the 2017-introduced laws.

Insurance groups are high, all cars in the group 41-50 bracket, but residual values will be strong, as it’s a top-end BMW, so your investment should be reasonably well protected.

Like all BMWs, the X6 has Condition-Based Servicing, the marque doing away with conventional mileage/annual maintenance schedules. The car can assess the state of most of its consumables and advise when it needs to go into a dealership for attention. Fixed-price service plans are available to minimise the running costs here.

The lower-powered diesels and the 4.4-litre V8 petrol in the 50i should be reasonably reliable, given they’re used widely elsewhere in the BMW portfolio. The M50d’s unique triple-turbo arrangement could be an Achilles’ heel long term, though, because turbochargers have limited lifespan and so the fewer of them you (might) have to replace, the better.