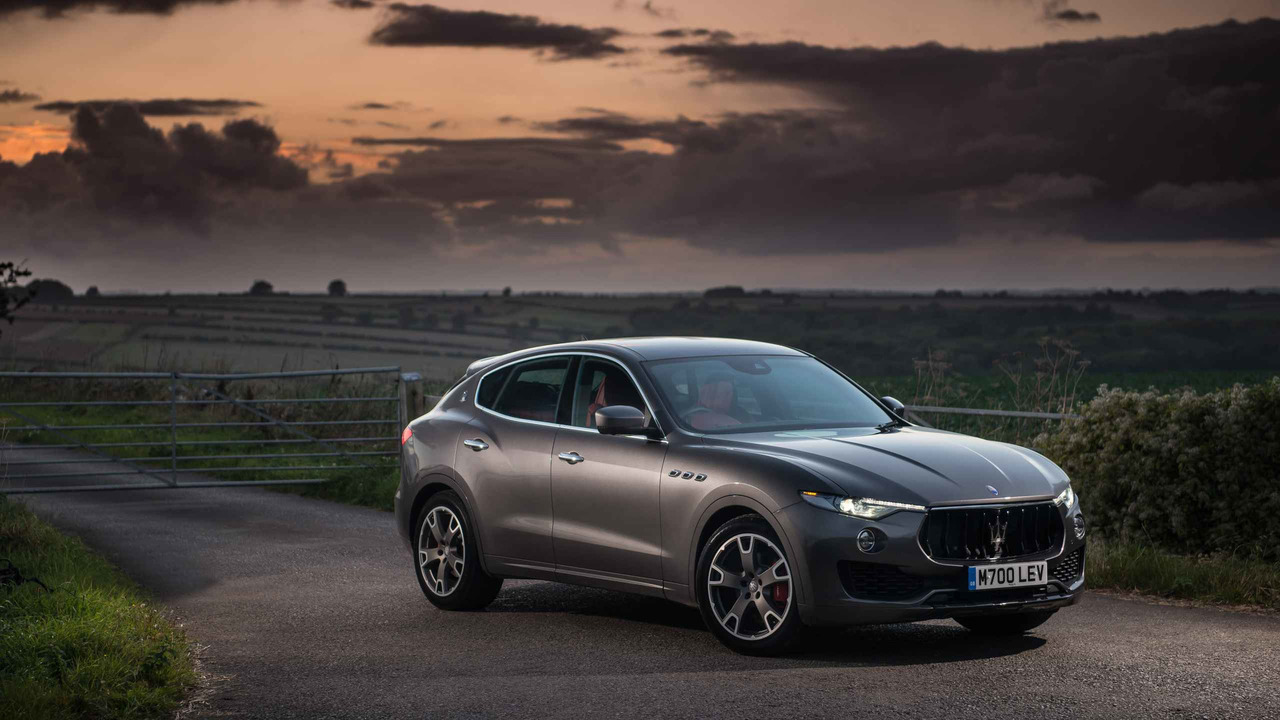 The new player in a mature marketplace.

The Levante is the Italian firm’s first SUV; it was a long time coming and is set to be the cornerstone of Maserati’s push for greater volume. Based heavily on the Ghibli saloon, it’s not quite the measure of its best rivals in what’s now a mature marketplace, but is a different enough proposition to tempt a few buyers out of some of them. It’s a shame that the styling is relatively conservative and, given its niche appeal, Maserati has yet to confirm any powertrain other than the 3.0-litre V6 turbodiesel for UK customers. That Maserati badge has a lot of pull for many though, itself defining differentiation, which will be enough for Maserati to attract buyers into its showrooms and help achieve its long-term volume goals.

Did you know? The Levante is all-Italian, even its diesel engine, which is built by VM Motori; the non-UK petrol 3.0-litre V6 is built by Ferrari though…

The Maserati Levante is merely a good, rather than outstanding competitor in the busy premium, sporting SUV marketplace, but it will undoubtedly do its job in boosting the Italian firm’s sales - without troubling the bottom line of its rivals. Its impact will be small then, and, given the lengthy wait for it, we can’t help but feel a little bit disappointed in the current diesel-only specification, somewhat generic looks and the interior quality. Given its niche appeal, and the type of buyers it’ll inevitably appeal to, we rather like the idea of a Levante with Ferrari-derived power, not least as it would give it a real unique selling point for the small number of buyers who’ll consider it in the first place. Could be better then, but we’ve come to expect that from Maserati.

Following Maserati’s typically literal naming policy (this a company that calls its saloon ‘four-door’ in Italian - though we’ll concede that 'Quattroporte' does sound mega), Levante in Italian means ‘rising’. Which is exactly what it effectively represents, a taller Maserati based on the underpinnings of the Ghibli saloon. Given it’s taken so long to reach showrooms we can’t help but feel a bit underwhelmed by the design. While its grille is very on-trend for Maserati’s future styling direction the rest of the Levante’s shape is a little bit generic. There’s a lot of bonnet, which is fine, but from the windscreen back it could be any number of SUVs, and there's more than a hint of Mazda and Infiniti about its style. Still, most will only see that big dominant grille in their rear-view mirrors, while the chrome trim and huge wheels do raise it above the mainstream norm, if not quite elevating it to the status of the best of its premium rivals.

The mere fact it’s not one of any number of Audi, BMW, Mercedes-Benz, Range Rover, or Porsche models does increase its appeal considerably. Buy a Levante and it’s a very conscious, deliberate, and considered choice, which immediately marks you out as different. That alone is enough to appeal, and even if it will be responsible for adding many multiples to Maserati’s global sales it’ll still be an unusual spot. It’s a bit of a shame then, that its rarity doesn’t necessarily translate to genuinely head-turning looks.

It all feels very familiar inside; that is, of course, if you’ve ever sat in a Ghibli. The Levante borrows heavily from its saloon relation for the cabin, which, given the firm’s size, is entirely forgivable and expected. You can cover virtually the entire interior with soft leather if you tick the plentiful interior options choices, though we’d avoid the wood trim, which lacks the upmarket look it’s aspiring to; instead we’d pay a bit more for the more technical looking carbon fibre trim pieces for the cabin.

You sit high, the relatively low roof meaning it feels a bit more sporting (and less spacious) than many rivals, though as the company is keen to point out, this is ‘The Maserati of SUVs’. If that means more sporting then it's almost right, more of which later, but likewise if that means a touch lacklustre in the details then it’s bang on. The cabin plastics lack the fine quality that you’ll find in an Audi, ‘Benz, BMW or Porsche, while there are quirks like too-short gearshift paddles, which can also obstruct the column stalks.

The seats are firm, optional sports seats even firmer, and they hold you tighter. There’s the option to heat them, though like a lot of the controls, doing so requires navigating a series of sub menus via the large 8.4-inch touchscreen, which is needlessly fiddly and distracting on the move. The rear seats are decently, if not generously proportioned, the relatively small glazed area making it feel more claustrophobic than it actually is. Forget a third person back there, as the middle seat is not really fit for purpose, but, in fairness, that’s often true of many of its rivals, too. The 580-litre boot is spacious enough, though the high sill can make loading tricky.

Maserati might still place a rather incongruous analogue clock top, dead centre of the dashboard, but it has embraced connectivity and touch-screen interfaces that buyers in this class expect. Only partially successfully, though, as those used to Audi’s MMI, BMW’s iDrive, Mercedes-Benz Comand, or Volvo’s cool iPad-aping centre screen in the XC90 will inevitably find the Maserati’s interface lacking. It is operated by either touch screen or via a rotary dial on the transmission tunnel. It requires a fair amount of familiarity to find things. At least the climate controls are below the screen to allow quick, easy adjustment.

While the operation of the infotainment might be a bit below the ease of the best of its competition, Maserati does at least offer a fairly comprehensive standard level of equipment, including satnav and all sorts of connectivity before you have to tick any options boxes. There are plenty of packages, too, all with a surround view camera system, and if you opt for the Driver Assistance Package you gain Lane Departure Warning, Forward Collision Warning, and Adaptive Cruise Control with Stop and Go function. You can open the boot via an optional kick sensor, and stereo options include either a Harmon Kardon 900W 14-speaker premium system, or 1,280W 17-speaker system by Bowers & Wilkins. Naturally, the infotainment offers app-based connectivity and configurability via your smartphone, plus Bluetooth.

While the Levante does a good job on the road, it’s up against some seriously tough rivals like Porsche’s Macan and Cayenne, as well as Jaguar’s F-Pace, the Range Rover Sport and many more overtly sporting SUVs. The four-wheel-drive system is set up to be predominantly rear-wheel drive, and Maserati claims a weight distribution that’s a sports car like 50/50 split, promising fine balance. There’s some credence to its claims, too, the chassis certainly exhibiting some sharpness and agility, the standard air suspension delivering taut body control, if sometimes at the expense of comfort.

The steering is accurate, with some feel, though it lacks the clarity of response of a Porsche Macan or Jaguar F-Pace, and at slower speeds it can feel a touch heavy. The Q4 four-wheel-drive system is very much road biased, even if, with the suspension raised 40mm, it’ll venture further off-road than any Maserati before it. The torque split is predominantly rear-biased, though as much as 50 percent of drive can be diverted to the front axle depending which tyres are able to use the available grip most effectively.

The sole UK engine is a 3.0-litre turbodiesel, its 275hp output respectable enough, while its 442lb ft of torque is more useful given the car's not insubstantial 2,205kg kerb weight. It will reach 62mph in 6.9 seconds from rest and onto a 142mph top speed, though pinning the accelerator to the floor does introduce a fair bit of diesel clatter at higher revs. Keep things a bit more sedate and it’s quieter, the eight-speed automatic shifting with imperceptible efficiency, the Levante best sampled when it’s not pushed too hard. The chassis does show real promise if Maserati UK ever plucks up the courage to add the more powerful petrol engines into the model mix.

Four-wheel drive, traction control and electronic stability systems, a full house of airbags and a lot of bonnet in front of you should protect you in the event of an accident. It’s not been independently crash tested, but the Ghibli upon which it’s based has scored a five-star Euro NCAP test result. There’s no reason then to think that the Levante won’t be able to produce a result the same. For the full suite of driver assistance and crash prevention technology you’ll need to go for the Driver Assist Package, which adds Blind Spot Alert, and Lane Departure Warning, Forward Collision Warning, and Adaptive Cruise Control with Stop and Go function. Add the Driver Assist Package Plus and greater functionality and autonomy is added to that kit.

Solid colours consist of black or white (actually called Nero and Bianco - doesn’t everything sound better in Italian?) with a palette of 11 metallic hues on offer as standard. Like any premium car Maserati can paint it any colour you wish if you're willing to pay the price. The leather choices are extensive with eight colours, while optional Ermenegildo Zegna interior treatments up the luxury even further with premium leathers, contrasting stitching, and even silk headlining.

There’s technically only one trim level, Maserati leaving it down to you how you specify your Levante via a range of options packages. There’s a Sport package that adds kit like the surround view system, via the included Premium Package, a sport rear spoiler, body coloured exterior mouldings, metallic finish skid plates and grille, 12-way powered, memory sports seats, and a sport steering wheel in leather. If metallic paint is not your thing you can swap that package for a ‘Dark’ one, which brings black exterior treatments. Many more, ever more expensive options continue that ability to personalise, while a wide choice of wheels up to 21 inches in diameter and in various finishes will sate the appetite for a unique car that buyers in this class expect.

The Levante is big, the long bonnet and poor view out the back meaning you’ll find that optional surround-view parking camera a necessity rather than an indulgence.

More than any other premium SUV it’s unlikely you’re going to buy a Maserati without the expectation of it being fairly expensive to own and run. Even a diesel one. The official combined economy figure is 39.2mpg, though real-world you're more likely to be at least 10mpg off that, worse if you push the engine and enjoy the chassis. Emissions are 189g/km. Depreciation should be kept in check initially while Maserati fulfils early orders, but it’s possible that the Levante’s more niche appeal will hurt its residual value in the long run.

The Levante is so new we’ve yet to hear of any reliability woes. Servicing is annually, or every 12,500 miles.

The Levante starts at £54,335, though that’s before you start adding any options to it. That’s around the same Porsche asks for its Cayenne diesel, which the Levante out performs, on paper, at least. There’s only one model as such, but start adding multiple options packs and it’s not too difficult to spec up a Levante to £70,000.