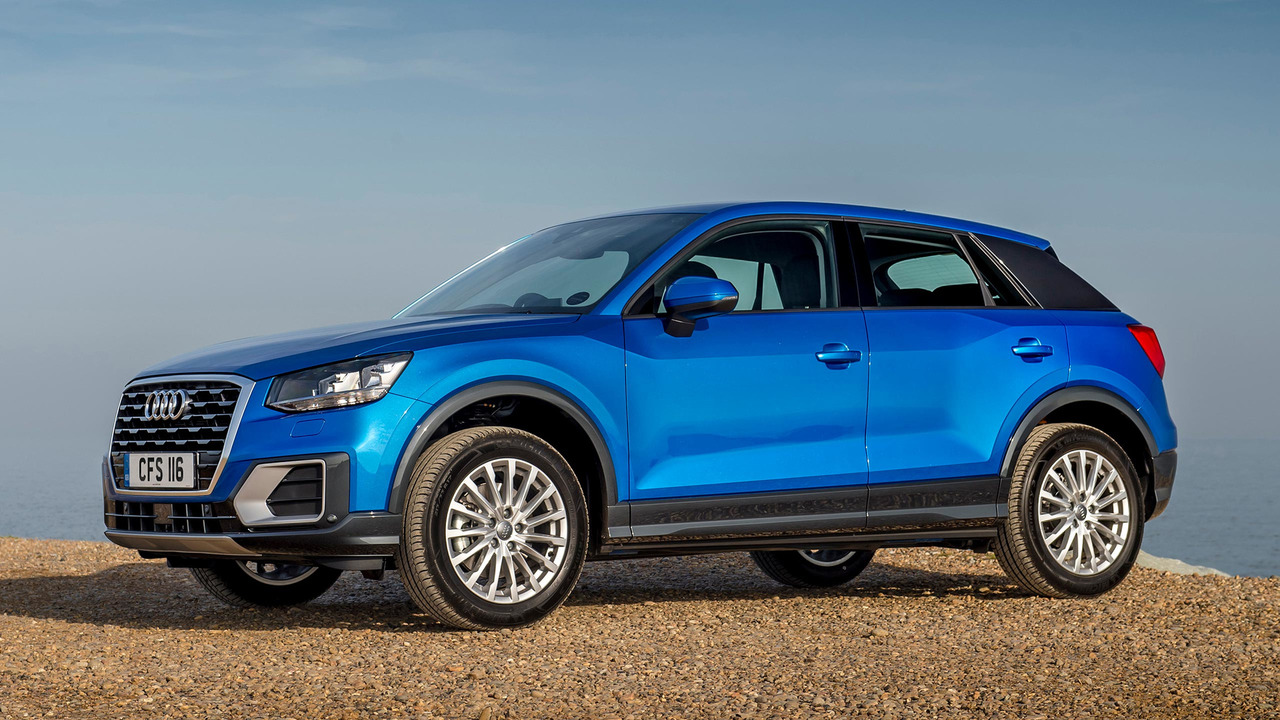 The Audi Q2 has plenty of the usual Audi appeal, in an affordable yet small, high-rise body. So what's not to like?

Launched in 2016, the Q2 is the fourth and smallest SUV in the Audi range. With a bold design and lots of personalisation options, it's an obvious rival to the Mini Countryman and Mercedes-Benz GLA at the top end of the market, while also providing classy opposition to the funky Nissan Juke, Citroen C4 Cactus and Renault Captur.

Did you know? The Audi Q2 won the Compact SUV category at the 2016 Golden Steering Wheel Awards – one of Germany’s most prestigious motoring contests.

The Audi Q2 is a classy, practical and compact SUV with a sporty profile and a great range of engines. It's a little on the expensive side, but it’s very competitively priced against rivals like the Mini Countryman and VW T-Roc, and ultimately it's a premium choice with plenty of kit. For many it will be the connectivity and personalisation options that swing it.

Slightly lower than most of its competitors, thanks to its sporty roofline, the Audi Q2 is perhaps closest in overall size to a Citroen C4 Cactus.

The first thing that strikes you about the Q2 is that it looks like no other compact SUV. As well as a signature Audi ‘Single frame’ grille, it features clean, sculpted lines and a C-pillar ‘blade’ available in various colours. Add that to the range of exterior colours, including our favourite, Vegas Yellow, and you have a car that stands out, in a good way.

The Q2 is very much an Audi inside, with a premium look and feel. And the higher the trim level you opt for, the better it gets.

The seating position is comfortable, if a fraction lower than some rivals. The steering wheel adjusts for reach and height, while the driver’s seat is height-adjustable depending on the trim level. Visibility is good, and there's plenty of room up-front and in the rear. In fact, there's definitely space for four six-foot adults, although much taller passengers in the back might struggle for headroom.

The dashboard design, ventilation controls and materials are up to Audi's usual high standard, and it features state-of-the-art connectivity, plus multi-colour LED mood lighting.

The Q2 is equipped with a seven-inch infotainment screen (an eight-inch upgrade is available) positioned high on the instrument panel. Plus there is a rotary controller and additional short-cut switches lower down nearer the gear lever. DAB radio, a multi-function steering wheel and air conditioning are standard, but if you go for the higher trim levels, options such as cruise control, automatic lights and wipers, plus various driver and safety aids, come into range. We recommend paying extra for the Audi Virtual Cockpit – an impressively fluid 12.3-inch driver's digital display first seen on the TT – along with the head-up display.

Luggage space is a decent 405 litres (1,050 with the back seats down) – more than a Nissan Juke, but less than a Mini Countryman. The Q2’s boot is usefully square in shape and there’s only a tiny load lip. With the rear seats folded down, the load area is nicely flat.

Other practical solutions are available, such as a powered tailgate and a three-way-split rear seat with cargo through-loading.

Storage space in the cabin includes two cup holders in front of the gear lever, a good-sized glovebox and decent door bins. Rear-seat passengers get a folding centre armrest complete with two cup holders, too.

All Q2s come with essentials such as a DAB radio, Bluetooth and a USB port for charging your phone. If you connect a smartphone through the USB, you can also make use of Apple CarPlay and Android Auto – allowing you to operate your phone through the car’s infotainment system.

All models also have a multi-function steering wheel, which enables you navigate the radio, telephone and driver information settings in a separate screen between the instruments.

Depending on which spec you go for, the Q2 offers tech from higher up the Audi range, including the Virtual Cockpit and head-up display.

There are also driver-assistance systems from the larger Audis, including 'Pre-Sense Front', which recognises cars and pedestrians, and will hit the brakes if it detects an impending collision. Options include adaptive cruise control, traffic-jam assist, lane-departure warning, lane-keeping assist, traffic-sign recognition and rear cross-traffic assist.

The Q2 comes with Audi's standard MMI media screen, positioned high on the dashboard. It can be operated by a rotary/push-button control and two buttons on the centre tunnel. When MMI Navigation Plus with MMI Touch is ordered, the user also gets a touchpad for additional control – or the system can be voice-activated. A wi-fi hotspot enables surfing and streaming.

Finally, if you also want serious sounds, a Bang & Olufsen hi-fi with 14 speakers is optional.

There are four engines available for the Q2:  two petrol and two diesel. An additional 2.0-litre petrol is due later in 2017. The petrol options are 1.0-litre 116hp three-cylinder TFSI and a 1.4-litre 150hp four-cylinder TFSI. The two four-cylinder diesel engines (1.6 and 2.0 litres) have outputs of 116hp and 150bhp respectively.

All engines are available with a six-speed manual gearbox or seven-speed S Tronic dual-clutch auto. Additionally, the 2.0-litre diesel can be combined with Quattro permanent all-wheel drive. Unusually, Audi expects the 1.4 TFSI to be the most popular engine, ahead of the diesels, while customers are also expected to go for the higher trim levels (Sport and S Line).

Our pick would be a 1.4 TFSI in S Line trim with the S Tronic gearbox. The engine is a smooth, punchy performer, capable of more than 50mpg. But it’s a close-run thing with the thrummy 1.0-litre unit, which is one of the best three-cylinders in the business. It can reach 62mph from standstill in 10.1 seconds, a top speed of 122mph and still return 55mpg with CO2 emissions of just 117g/km.

If your journeys involve long-range cruising on motorways and you’d prefer things a little more relaxed, the diesels are probably a better option. The 1.6 is arguably the best blend of power and economy. It’s capable of 0-62mph in 10.3 seconds, plus 64mpg and 114g/km.

Partly because of its sportier, lower profile, the Q2 drives more like a hatchback than an SUV/crossover. The ride may be a little firm for some, but it's refined. More spirited drivers can switch to the Dynamic option in Audi Drive Select, where the Q2 feels particularly planted, with well-controlled body-roll and precise steering. It’s fun.

The Audi Q2's safety technology helped it score a maximum five stars in Euro NCAP crash tests, with an impressive 93% adult rating, an 86% child rating and a 70% score for pedestrian protection.

All Q2s come with Audi’s Pre-Sense system with pedestrian recognition. Actions are taken to help protect the driver and passengers if a potential collision is detected; these include seatbelt tightening (front seats) and closing the windows and sunroof (if fitted).

Other optional safety equipment includes adaptive cruise control (which matches the speed of the car in front), a lane-departure warning system, traffic-sign recognition and automatic headlight dipping, plus Audi Side Assist with Cross-Traffic Assist Rear, which helps when changing lanes and warns the driver of traffic crossing behind the car when reversing.

The Q2 is available in 12 exterior colours including two new and exclusive to this model. It looks particularly good in Vegas Yellow, Tango Red and Ara Blue. Additionally, there’s a choice of five colours for the C-pillar blades such as Manhattan Grey, Ice Silver and Brilliant Black. For instance, a red car with white C-pillars works, or yellow with grey C-pillars.

There are four trims available for the Q2: SE, Sport, S Line and Edition #1.

Stand-out features on S Line cars include front, side and rear styling enhancements, 18-inch alloys, LED headlamps, LED rear lights with sweeping rear indicators, and front sport seats upholstered in cloth/leather with ‘S’ embossing on the backrests. There are smatterings of brushed aluminium around the cabin, too.

The Edition #1 is fully-loaded and finished in Quantum Grey with a contrasting lower body in Manhattan Grey and C-pillar blades in black – plus 19-inch black alloys. The front sport seats are upholstered in leather with contrasting brown stripes.

If you can stretch to S Line, then that’s the trim to go for. But whichever level you choose, go easy on the options – or your compact SUV could end up costing mid-size money.

The Q2 is similar in size to most cars in the compact SUV category, such as the Nissan Juke and Renault Captur. However, it’s shorter than some of its premium rivals, including the Mercedes-Benz GLA and Mini Countryman.

All the engines do well on fuel if used gently. If used hard, their turbochargers suck in much more air, leading to much higher fuel bills.

If it’s economy you’re after, the 1.6 TDI mated to the seven-speed S Tronic gearbox is the combination to go for. On paper, it will return up to 68.9mpg (manual: 64.2mpg).

As ever, your choice will depend on your typical journeys. If you cover lots of miles cruising on motorways, then the diesels are your best option. If you tend to travel shorter distances and drive in town, the petrol units could be your best bet.

Insurance groups for the Audi Q2 range are slightly higher than comparable cars in the compact SUV sector.

In the Auto Express Driver Power survey 2016 (based on the responses of 50,000 UK motorists), Audi came a lowly 23rd in the list of most reliable manufacturers. That said, the Q2 is based on the tried-and-tested A3 and shares the same basic chassis and running gear as the Volkswagen Golf, Skoda Octavia and Seat Leon.

Audi dealers have a reputation for charging high prices for servicing. It’s often wise to supply your own oils and other consumables if you can source parts that meet or exceed Audi’s own original specification.

Audi offers two types of service schedule – fixed (annual) and flexible (up to two years). These depend on your type of driving; fixed is for less than 10,000 miles a year of mainly city/town centre driving and shorter journeys, while flexible is for 10,000 miles+ of motorway driving – or longer-distance journeys in general.

At the bottom of the range, the £20,700 Q2 SE is a little more expensive than a similarly-spec mainstream compact SUV. However, the likes of Vauxhall, Nissan and Renault don’t have Audi’s badge appeal.