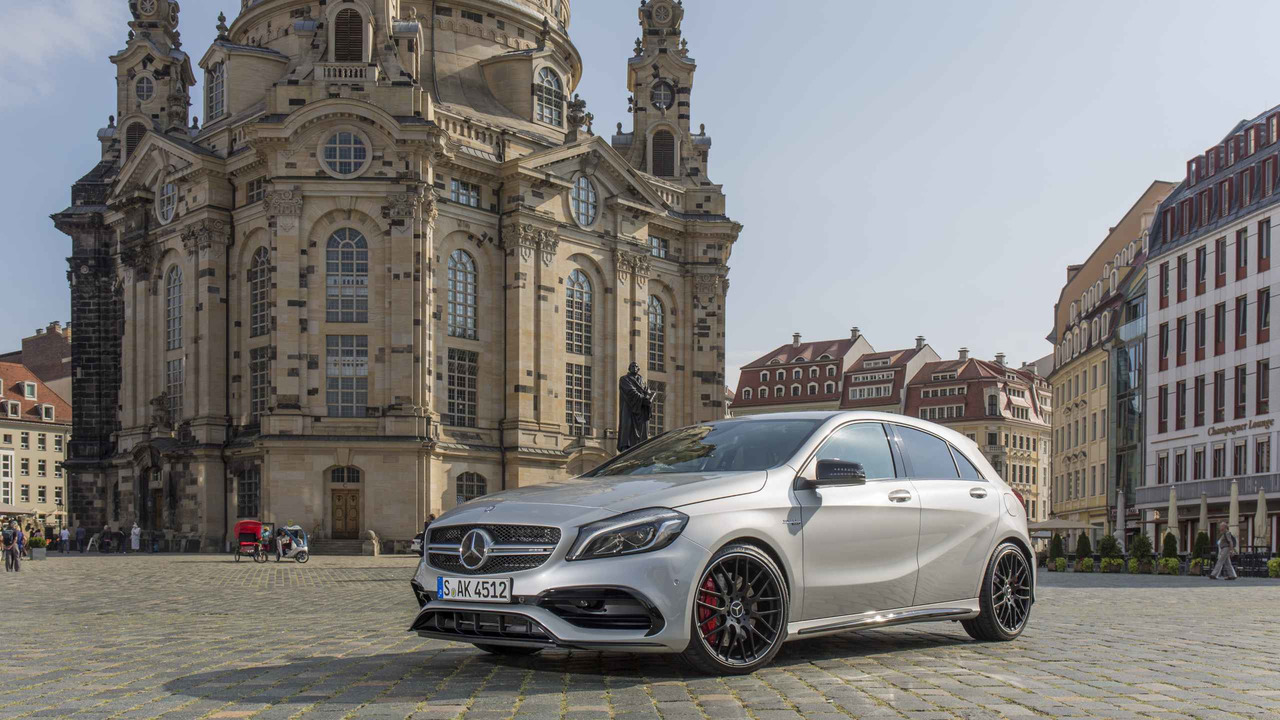 One of the fastest hot hatchbacks in the world.

It has a hugely potent 2.0-litre turbocharged four-cylinder petrol engine that drives all four wheels through a dual-clutch gearbox, making for a specification that’s dedicated solely to going quickly in all conditions. It competes in a rarefied sub-sector at the top of the performance five-door class, alongside the Ford Focus RS, the Audi RS 3, and the Volkswagen Golf R. The A 45 is rather expensive and it can be difficult to extract its maximum potential on the road, but a midlife facelift in 2015 made it more fun to steer for more of the time, so it’s one of our preferred mega-hatches.

Did you know? Previous generation A-Classes were tall and narrow, so there were no specific ‘hot’ versions – the 196hp Mk2 A200 Turbo was fastest, prior to the A 45.

While it will cost you a lot of money to buy the Mercedes-AMG A 45 4Matic, if you do decide to make the considerable outlay on one of these unhinged German motors, you’re getting one of the quickest hatchbacks that has ever been made. A 2015 facelift brought in subtly improved looks, revised gearing, better aerodynamics… and an additional 21hp, to make the 381hp A 45 the most powerful and fastest hot hatchback in the world (right up until Audi took the RS 3 from 367- to 400hp in early 2017). The best news, though, was that two-mode adaptive dampers were added to the mix in 2015 – and these alone transformed the AMG from fast but joyless before, into a genuinely involving steer afterward. So, no, it’s not cheap and yes, there are cars that will cost significantly less that can drive 95 per cent as well as the Mercedes, but that doesn’t alter the fact that the A 45 is a brilliant mega-hatch that epitomises ludicrous 21st-century excess.

Previous generations of the Mercedes A-Class were not what you’d call pretty, being upright and narrow conveyances with a focus on providing interior space and comfort in a cleverly-packaged small body, rather than possessing any true sense of external grace and style. For the Mk3 A-Class, released in 2012, Mercedes decided to make the car a much more conventional five-door hatchback and that move benefits the AMG A 45 enormously. It’s a cracking-looking thing in its most ‘basic’ form, although it’s also fairly discreet – there’s a modest spoiler on the roof, a gaping ‘A-wing’ front bumper, twin strakes spurring off to the sides of the three-pointed star on the radiator grille, 18-inch alloys, and some subtly beefier side sills.

That, though, can all be remedied with a variety of styling upgrades that up the drama factor substantially. First up is the AMG Night Package, which cloaks a lot of the external detailing in black – including the 19-inch wheels, door mirrors, front splitter, rear diffusor, and side trims – and tints the rear windows. You need to first equip this pack to then fit the AMG Aerodynamic Package, which puts a larger front splitter with additional flics on the front, and a chunky, gloss-black roof spoiler at the rear. Both of these together will relieve a buyer of comfortably more than £3,000, while for maximum bling effect there are also carbon-fibre mirror housings.

But proper extroverts will need the Yellow Night Edition (YNE). It’s a bespoke model in its own right, with a price tag inflated by almost £6,500, and the name is a giveaway: it’s finished in Cosmos Black paint with a load of bright yellow highlights, in the form of pin striping on the lower body, around the circumference of the black alloys, on the sides of the boot spoiler, and across the backs of the door mirrors. So it’s safe to say that the brash YNE is very unlikely to ever go quietly into the night…

The A-Class cabin is beautifully built and presented in standard form, so benefitting from leather sports seats, a flat-bottomed AMG steering wheel, bespoke chequered flag cluster dials, and various other AMG accoutrements – like carbon fibre dash inlays – really lifts the ambience for the A 45. Equipment includes heated seats, cruise control, dual-zone climate control, and speed-sensitive sports steering, among much more. The Yellow Night Edition gets various yellow highlights to echo the exterior theme, plus a steering wheel with an ‘AMG Edition’ logo embossed on it. Better still, some of the ergonomic idiosyncrasy of the regular A-Class is eradicated in the A 45, as it doesn’t have the column-shift, instead employing a more conventional gear lever on the transmission tunnel.

The A 45 is an A-Class at heart, so it’s as practical as most family-sized hatchbacks, if not class-leading in any regard. The boot is sizeable at 341 litres with all seats in place and 1,157 with them folded down, but the rear light clusters cut into the loading aperture. Rear-seat space is average – you’ll be more comfortable in a Volkswagen Golf R – but with five doors, at least accessing the back bench is easy enough.

In terms of the sheer pace the AMG A 45 possesses, the exuberant noise its mighty 2.0-litre blown four-pot engine and raucous exhaust system makes, its tremendous all-corners traction and mammoth mechanical grip levels, and the beautifully judged, powerful AMG braking system that allows you to shed speed almost as quickly as you can pile it on with the razor-sharp throttle, then it’s a thrilling machine to drive. The steering is superb and the body control is infallible, and of course the 4Matic traction means the Mercedes-AMG loses little in terms of cross-country speed, even if the roads are streaming with rainwater.

If there’s a criticism of the A 45, it’s that to get the absolute best out of it requires driving it at speeds that simply aren’t legal on the roads, so owners will need to take the car to track days if they want to sample its most exhilarating talents. Thankfully, the optional two-stage adjustable dampers really bring in huge, beneficial dynamic differences. The car is notably more engaging to drive at saner velocity than it was before, with a more fluid feel to the way it traverses a bumpy road and less in the way of fun-sapping early-onset understeer. Conversely, the dampers also make the car more supple when it’s in Comfort mode – not so smooth as to suggest you could ever forget you’re in the 381hp model, of course, as it’s always just a bit too firm for that, but certainly good enough to make the A 45 an adept cruiser. Wind noise and tyre roar are both beautifully suppressed too, so the net result is that in all traffic conditions, the A 45 is a rather splendid and highly likeable machine.

The A 45 AMG is very, very impressive here. In fact, if only Mercedes didn’t feel the need to charge extra for two packages – Lane Tracking (including Blind-Spot Assist and Lane-Keeping Assist) and Driving Assistance (it adds to these two features plus Distronic radar cruise control and the Pre-Safe anticipatory system) – we’d have probably given the AMG full marks. A five-star Euro NCAP rating couples to a huge plethora of passive and active safety items to make the Mercedes a top recommendation – expect Active Brake Assist, seven airbags, the Attention Assist driver fatigue monitor, three-stage ESP traction control, auto lights and wipers, two ISOFIX fittings, and a tyre-pressure monitoring system, among more.

Aside from the special order (and pricey) designo Magno Mountain Grey paint, which is the only shade in the palette specific to the AMG A 45, the usual A-Class colours are available for the hottest model. No-cost, solid paints are Cirrus White or Jupiter Red, with the metallic options represented by Elbaite Green, Cosmos Black, Polar Silver, Mountain Grey, Cavansite Blue, Canyon Beige, and Orient Bronze. The Yellow Night Edition comes with a metallic colour as part of its price, but you don’t get a choice: it’s Cosmos Black or nothing.

There are just two trim levels: the regular A 45; and then the Yellow Night Edition. These are extremely high-spec cars, coming with absolutely everything fitted to the lesser A-Class models further down the family tree, precisely the sort of high-end stuff you’d expect of a 40 grand-plus machine. Over and above the A 45’s comprehensive specification, the Yellow Night Edition benefits from a Harman Kardon Logic 7 surround sound system, keyless entry/exit and go, and a panoramic glass sunroof to account for its significant premium. It also comes with the AMG Night and Aerodynamic Packages, and the 19-inch upgrade alloys as standard.

No major problems getting the A 45 into a garage, given it’s actually quite compact and short, but watch for potential grounding-out issues of the front splitter if your garage has a severe change in approach angle to your driveway, and bear in mind the car’s body width (excluding door mirrors) is 1,780mm.

Quoted economy figures for the Mercedes-AMG A 45 are astonishing, in light of its 381hp output and potential 170mph capability. By using a turbocharged four-cylinder 2.0-litre engine, the company says it can achieve almost 41mpg combined with just 162g/km of CO2.

– it achieves these partially by using an Eco Start/Stop feature and a ‘coasting’ function for the gearbox, which disengages the clutches when the driver is off the throttle at speed. The reality is that you’re not going to see anything close to 40mpg on a regular basis, though, especially if you regularly enjoy the Mercedes’ rabid acceleration - so budget on more like 20-25mpg.

We’d advise caution on specifying the 19-inch wheels, as they do adversely affect the emissions rating enough to result in an additional £300 of first year’s tax under the 2017 revised VED laws, and they also push the A 45 up two per cent for Benefit-in-Kind. Insurance is a lofty group 41, but the A 45’s extremely strong residual values should go a long way to off-setting the considerable purchase price and running costs.

Since 1997, all Mercedes passenger cars have come with the Active Service System (otherwise known as Assyst), which does away with a fixed mileage/annual servicing routine as traditionally found on cars. Instead, the car monitors its vital consumables and then decides when it needs a service. This all depends on how you use it – lots of short journeys on a cold engine, or driving the A 45 particularly hard on road and track repeatedly, will see it in the dealership more regularly and frequently than if it’s used carefully and does lots of steady-state motorway miles.

There have been a few minor recalls for various batches of the A-Class, but they normally pertain to engines and tech found in the regular line-up rather than the A 45. Mercedes is normally highly placed in customer satisfaction surveys and the A-Class is a generally well-built car, so the AMG should prove dependable. Mercedes includes a three-year, unlimited-mileage warranty as standard.

While a 381hp Mercedes that has been worked upon by AMG was never likely to be classified as a ‘bargain’, the A 45 remains one of the most expensive cars of its type. Despite the long standard kit list, there are still plenty of options that will take the eager box-ticking buyer way beyond £50,000, and it looks extremely pricey compared to the scintillating Ford Focus RS, which has a starting price that’s little more than £31,000.