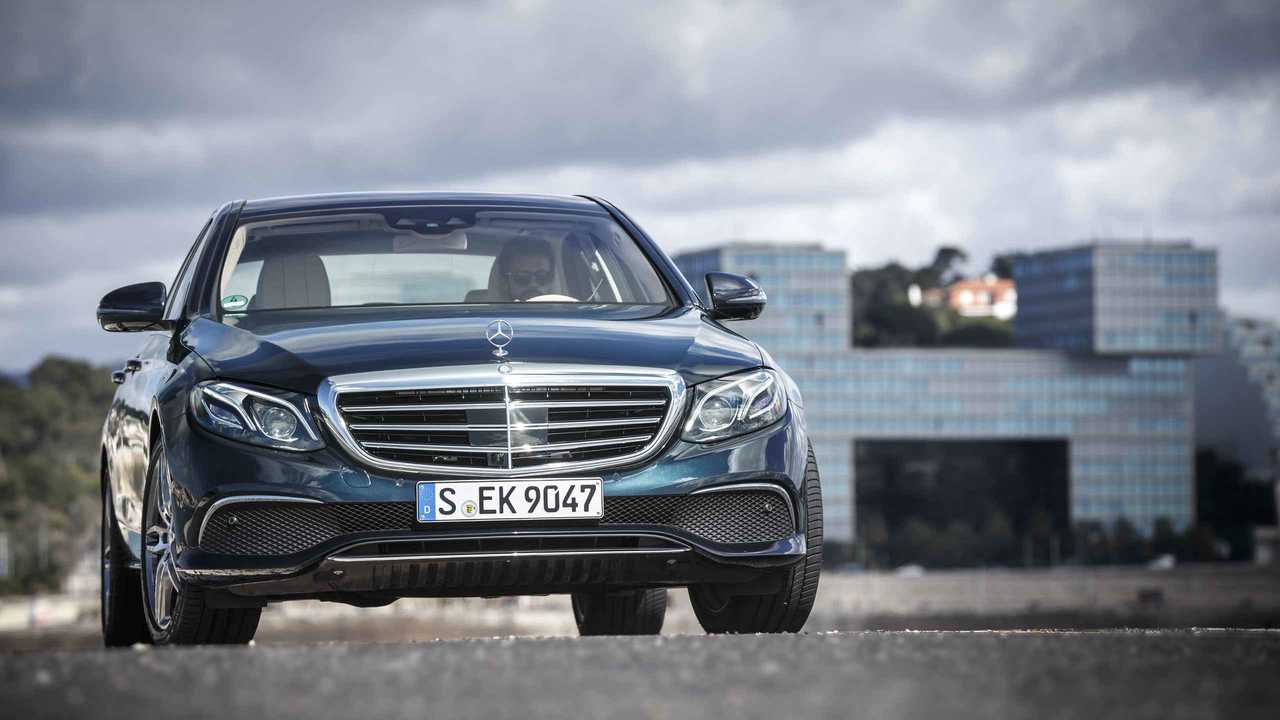 Welcome to the fifth generation.

Mercedes-Benz, presumably sick to its back teeth of lagging behind the BMW 5 Series in the midsized executive class for decades, decided to pull out all the stops for the fifth-generation E-Class, which launched in 2016. And, while the slightly newer BMW might be more fun to drive, it’s possible to propound the theory that the E-Class is the better premium four-door, mainly because it is tremendously comfortable, replete with cutting-edge technology, and reasonably inexpensive to run. A plug-in hybrid petrol-electric and a performance AMG variants are available, although the majority of the range consists of superb diesel engines. Just one gearbox, a nine-speed automatic, is offered, and while most E-Class models are rear-wheel drive, 4Matic all-corners traction is available on a few cars.

Did you know? Although the E-Class name has only been used since 1993, the MkV ‘E’ can trace its lineage right back to Mercedes saloons of the 1950s.

We adore the Mercedes-Benz E-Class. If you want thrilling driving manners and arguably nicer exterior looks, the BMW 5 Series might be the better choice – but if you want unmatched ride comfort, an interior that’s jaw-dropping in the right specification, and an incredible arsenal of technology, then the E-Class is the winner. Bag it with the advanced 2.0-litre turbodiesel in the E 220 d and you get a frighteningly talented machine for a reasonable outlay, that might just make you seriously question why you’d ever need to step up to an S-Class again.

Mercedes is taking flak for making its three heartland saloons look like carbon copies of each other, only marginally bigger/smaller as required. Yet, despite the fact the S-Class and C-Class came first, it’s the E-Class that wears the three-box design best. There’s a proportional elegance about the E’s exterior that does away with the slightly uncomfortable rear three-quarter aspect of the C-Class saloon, while it’s not as heavy-set as the gigantic S-Class, either. The E-Class looks fantastic in any of the specifications the regular range comes in, or the more performance-oriented guise of the AMG E 43, which serves as a bridging point between the regular range and the ultimate model – the utterly bonkers E 63.

If it weren’t for Mercedes’ wilfully different ergonomics – a column-mounted gearshift, key ancillary controls clustered onto one stalk to the left of the steering wheel, seat adjustment buttons on the door cards, and that strange ‘double-deck’ infotainment controller – then we’d give the E-Class full marks here.

In fairness, of the points above, only the wipers/main beam/indicators stalk remains an annoyance beyond first acquaintance. You get used to the location of the seat switches, and having the gear lever at your fingertips, and the rotary wheel of the infotainment controller isn’t too bad at all (the touchpad above it is less successful). Even better, you can control practically everything from the two square haptic pads on the steering wheel, which allow you to marshal the information displayed on both screens without moving your hands at all. Brilliant.

As is said twin 12.3-inch ‘widescreen cockpit’ display. It’s a real show-stopper and the only minor complaint is that it is not standard range-wide – on the four-cylinder diesels, it’ll cost nearly £1,500 to fit the Comand Online system that brings the centre screen, and then you can add the matching instrument cluster for less than £500. OK, two grand isn’t insignificant, but for this level of magnificence, the outlay is entirely worth it. So wonderful is the properly optioned E-Class dashboard that you might almost miss the fact the rest of the cabin is brilliant in terms of fit and finish; almost, we stress.

All models get leather upholstery with heated front seats, so the E-Class will be comfortable on cold mornings. There’s an acre of room inside for all passengers, although – as with all rear-wheel-drive cars – the under-car propshaft leads to a cumbersome interior transmission tunnel, so the centre-rear seat is for occasional use only. However, four adults will have no trouble lounging comfortably within the E-Class.

The front seats are four-way electrically adjustable on all models, while the steering column shuffles about for reach and rake too, so a superb driving position is attainable for people of all sizes. The Stowage Package, a centre console compartment, a big glovebox, and two large cupholders mean storage is not an issue, while the Benz’s big, well-shaped, 540-litre boot is another boon. The rear seats split 60:40 as standard, with the option to have 40:20:40 backrests.

Given the car can semi-autonomously drive itself for short periods of time and it has more technology than the S-Class, the E-Class is a car that wants for nothing in terms of tech. All the usual items – like DAB, Bluetooth, satnav, and more – are standard on all cars, while (apart from the four-cylinder diesels) features such as the Comand Online with voice control, Apple CarPlay and Android Auto compatibility, wireless phone charging, and the ability to turn the car into a Wi-Fi hotspot are prevalent across the rest of the range. What with real luxuries like a head-up display and the 590-watt, 13-speaker Burmester surround sound system on the options list for reasonable prices – plus that gorgeous twin-screen dash arrangement we keep raving about – then we have no compunction giving the E-Class full marks here.

The Mercedes E-Class majors on comfort ahead of acuity, and to that end the more affordable diesels are a good bet. The 2.0-litre four-cylinder is an all-new engine that was introduced in 2016, the E-Class being the first Benz to benefit from it. It delivers 194hp and 295lb ft in the E 220 d, or 150hp and 266lb ft in the E 200 d. There’s apparently nothing in it on official economy, but the E 220 d is markedly quicker, so it’s the better choice. Additionally, the E 220 d can have 4Matic all-wheel drive as an option, should you require more traction.

On the petrol front, there’s an intriguing plug-in hybrid called the E 350 e, which teams a 211hp, 2.0-litre, four-cylinder petrol engine to an 82hp electric motor. It has some amazing eco-stats that make it a tempting business proposition, although it’s not cheap to buy and not particularly exciting to drive. Finally, Mercedes-AMG delivers the most exciting model, the E 43 4Matic, which has a biturbo petrol V6 rated at 401hp – it’s the quickest version by miles (excluding the specialist E 63 of course), as 0-62mph takes just 4.6 seconds.

There’s one gearbox offered, the 9G-Tronic Plus automatic with nine ratios. This is a brilliant transmission that’s without fault, but it points to the E-Class’ comfort priorities. Whatever the guise, the Mercedes has composed and reasonably talented handling attributes, although it will never put a huge smile on a driver’s face. However, the E-Class is impeccably mannered as a cruiser. It is thoroughly hushed in all conditions no matter what’s under the bonnet: the 2.0-litre diesel performs in a much quieter, smoother fashion than its predecessor, and the other powerplants are all peaches as well.

But the absolute must-tick box (again, for the four-pot diesels, as it’s standard fit elsewhere) is the Air Body Control (ABC) suspension upgrade. This adds air ‘springs’ at all four corners and it transforms the ride quality from ‘excellent’ to ‘faultless’. You will not travel in anything more comfortable than the wondrous, air-suspended E-Class.

As some of its most impressive safety features are cost options, we’ve refrained from giving the Merc top marks. That said, there is a massive array of passive and active safety features range-wide, including useful driver assist systems, multiple airbags in the interior, two ISOFIX mounting points in the rear, and more, leading the Mercedes to a five-star Euro NCAP rating.

But the main safety attraction is the Driver Assistance Plus Package. It permits the E-Class to drive itself for extended periods of time in heavy motorway traffic, using active cruise control and steering inputs to stay in lane, a safe distance from the car in front. It’ll monitor your blind spots, prepare itself to protect its occupants in the event of front-on and side impacts, and brake if it thinks the driver has failed to spot an impediment ahead. Furthermore, the Mercedes can even assist with steering inputs during dramatic evasive manoeuvres.

The E-Class can be finished in 11 colours. The standard paint, Polar White, and its no-cost alternative, Black, are solid shades. Moving up, six metallic colours are Obsidian Black, Diamond Silver, Iridium Silver, Selenite Grey, Cavansite Blue, and Kallaite Green. For a higher price, two ‘designo’ hues, Diamond White and Hyacinth Red, are offered, and then the ultimate colour is the very expensive ‘designo Magno Selenite Grey’.

There’s SE, then AMG Line, and then the E 43 with its own specification and the E 63 above that. The four-cylinder diesel SEs get 17-inch alloys, Dynamic Select drive modes, Parking Pilot with parking sensors and a reversing camera, cruise control, and 64-colour switchable ambient lighting, among more. The SE versions of the E 350 d and E 350 e models are slightly uprated, with 18-inch wheels, ABC, Comand Online, and smartphone integration all fitted.

Moving up to AMG Line adds the sporty exterior body styling, an interior with bespoke detailing, and 19-inch alloy wheels. The AMG E 43 looks even more menacing again and comes with a sportier interior. To all of the core grades, two packs – Premium, and Premium Plus – can be added, bringing either three or five (respectively) highly desirable comfort and tech options to the party for less money than it would cost to spec each item individually.

The E-Class is a long car, at nearly five metres from nose to tail, while it’s quite wide too – it measures 1,852mm when not including the mirrors. However, excellent visibility and well-judged controls mean it’s an easy car to place on the road.

For the business user, the clear winner is the plug-in hybrid E 350 e. It’s a shame it’s so expensive to buy, but with emissions as minimal as 49g/km, it can take advantage of the lowliest nine per cent Benefit-in-Kind rate. That’s as an SE on 18-inch wheels; the 19s of AMG Line push it to 13 per cent BIK. The E 350 e can travel up to 21 miles on electric power alone, so if you can recharge the car regularly, you might get close to the astronomical 134mpg official economy.

The diesels are more than adequate for real-world needs, with returns of between 54- and 72mpg, and emissions between 102- and 144g/km. The E 43 stands alone here, with numbers of 192g/km and 33.6mpg not looking too impressive, although it is powered by a 401hp V6 petrol engine. Finally, all E-Class models have strong residual values to help reduce mid-term running costs.

It’s too soon to say how reliable the E-Class will prove to be in the long-term, but the brand has a good reputation for dependability, and the car is a premium machine built to exacting standards. Servicing is done as and when the car's computer thinks it needs it, with fixed-price maintenance plans offered by the manufacturer. Mercedes also includes a three-year, unlimited-mileage warranty.

Considering the technology offered and the standard of the car in basic format, the Mercedes’ £35,160 starting price seems like a bargain. Of course, with most of the must-have toys fitted and in the aspirational AMG Line specification, the price is going to move towards £50,000 far more quickly. But the Mercedes is not alone on this score – most of its main rivals exhibit the same trend when it comes to showroom prices. Also, spec an E 220 d up to £50,000 and it would feel like you were sitting in a car worth comfortably double that amount.