The Seat Alhambra people carrier has been a stalwart of the Spanish brand’s range since 2010. Its functional layout mixed with inoffensive style make it an excellent all-round MPV package. Sliding side doors and a third row of seats that even adults can fit in give it an edge over some rivals and it comes in a variety of specifications, including a sporty looking FR Line model.

Did you know? Seat named the Alhambra after a palace and fortress complex in Granada, Spain.

When it comes to the important MPV criteria, the Seat Alhambra scores well. And while it may be very similar to its Volkswagen Sharan relation, unless you want that added badge prestige, the Alhambra serves all of the same purposes for a slightly lower price. You can still build an Alhambra to a high specification, too, so it isn’t the cheapest MPV out there. It might not have quite the same polished road manners as the seven-seat BMW 2 Series Gran Tourer, nor does it possess the futuristic lounge-like interior of the Citroen Grand C4 Picasso, but instead, the Seat just gets on with the job at hand and does so in an easy manner. It fulfils the most important criteria of a family car - versatile dependability. 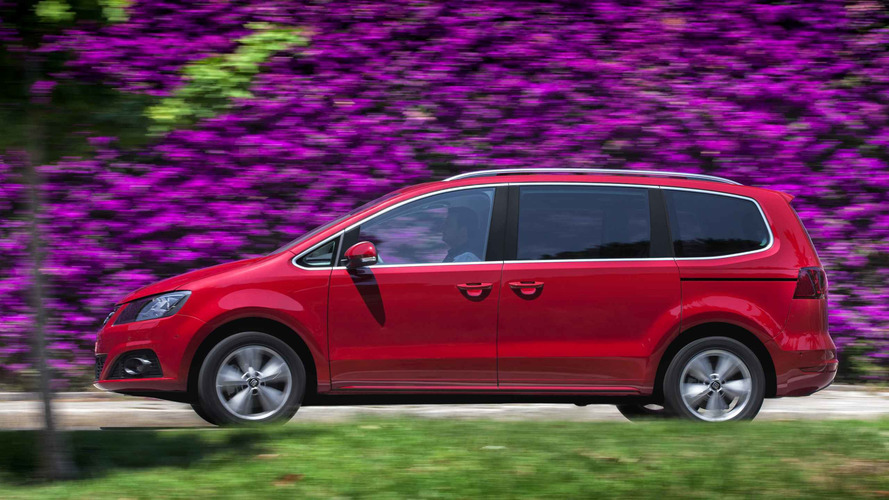 Aside from a slight visual update in 2015, the Seat Alhambra’s exterior hasn’t changed a great deal since the introduction of the current generation in 2010. Its conservative styling has served it well, though, as it hasn’t dated horribly. But whatever the Alhambra might lack in visual flair it more than makes up for in practicality. Upper trim levels add to the exterior look with upgraded wheels, bi-Xenon headlights, and chrome window trims.

One of the big draws for many to the Alhambra will be its sliding rear doors. Not only are they a novelty for kids, but they also make access so much easier. At 4,854mm in length and 2,081mm in width (including door mirrors), the Alhambra just manages to fit into regular car parking spaces. The only thing to be mindful of is the large tailgate that requires a bit more room when opening. 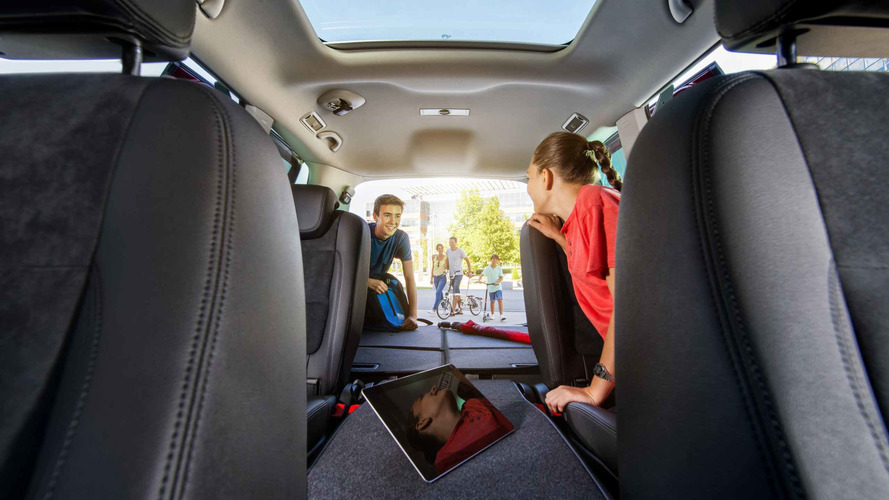 It is very much a case of function over form inside the Alhambra, which is no bad thing. The dashboard is well laid out with instruments that are easy to read at a glance and the central infotainment system and ventilation controls are within easy reach. Most of the surfaces look well finished and feel hard-wearing. Up front the driving position is comfortable, and there’s enough width to rule out banging elbows, but it is a little tighter in the middle row. The seats feature enough of a side bolster to provide support, but the flat seat bases mean you tend to sit on them rather than in them, yet they remain comfortable enough over longer journeys.

Dotted throughout the cabin are numerous useful storage bins including one incorporated into the top of the dashboard. The three individual seats in the middle row can move independently, and the lack of a transmission tunnel intruding into the floor space provides equal room to all. Getting into the third row isn’t too difficult either, made easier by the generous rear door aperture.

One very useful feature is the option of having built-in booster seats for either outer seat in the second row. The seat bases rise up and there is an additional unique headrest with increased side protection.

A low load height for the boot helps with heavier items, and even when the third row of seats are in use there is still a useful 267 litres of capacity. Should you want the Alhambra in its five-seat configuration the third row of seats fold flat into the boot floor, which then opens up 658 litres of boot space. Folding all of the rear seats is a simple task and creates a van-like 2,297 litres of cargo volume. 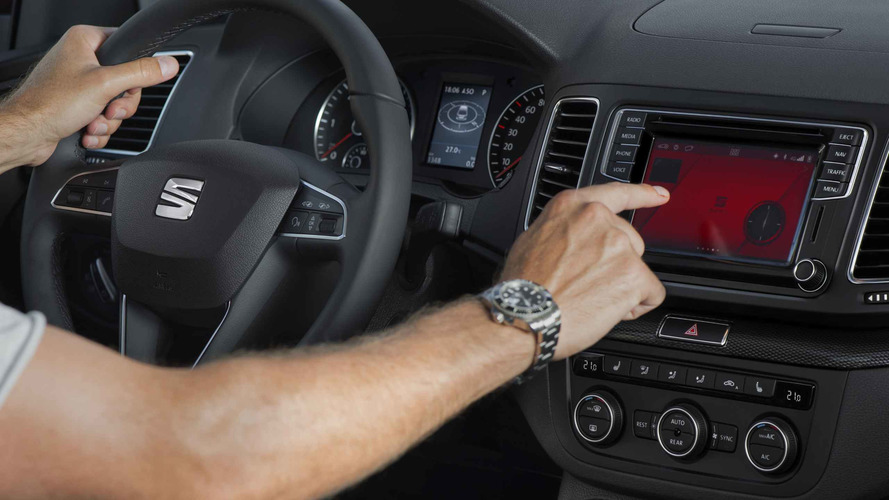 All Alhambra models come equipped with a 6.5-inch colour touchscreen with Bluetooth, audio streaming, and voice recognition. There is a multifunction steering wheel with audio and phone controls, too. Seat’s Full Link system is available as an option on most models (it’s standard on the Connect specification), and this adds Apple CarPlay, Android Auto, and MirrorLink smartphone connectivity. It also adds the ability to sync emails, social media accounts, and apps like Spotify. Satellite navigation with detailed 3D maps is standard on the two highest trim grades and is an option on all but the entry-level model. 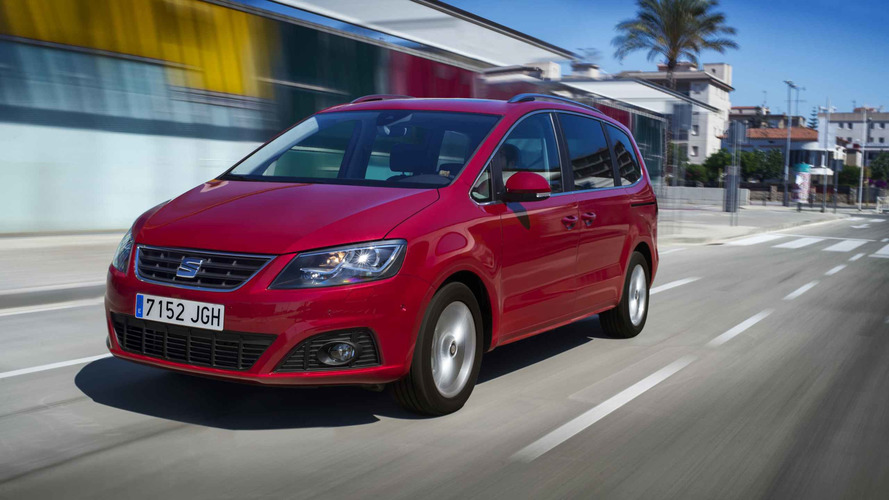 The engine range is made up mostly of two 2.0-litre diesels; it’s evident that the Seat Alhambra is focused more on economy than outright driving performance. There is a 150hp 1.4-litre TSI petrol engine on S and SE models, but with higher CO2 output and VED, and poorer fuel economy, it is less appealing. There are two versions of the familiar 2.0-litre TDI engine, producing either 150hp or 184hp and returning between 56.5- and 53.3mpg. The more powerful 184hp engine does add a bit of extra performance, but the 150hp version with its 250lb ft of torque is adequate to pull the 1,882kg Alhambra and its passengers around.

The suspension majors on comfort, and while it might not give drivers lots of feedback, it is far from an unenjoyable car to drive. You get just the right amount of weighting in the steering and it is easy to modulate the brakes for a smooth ride in start-stop traffic. The six-speed manual gearbox has a lovely, positive feel to it when shifting gears, but if you prefer an automatic transmission, the DSG dual-clutch system is near seamless in its changes. Seat doesn’t offer an all-wheel-drive option, but the Alhambra does feel very surefooted even in more inclement conditions. 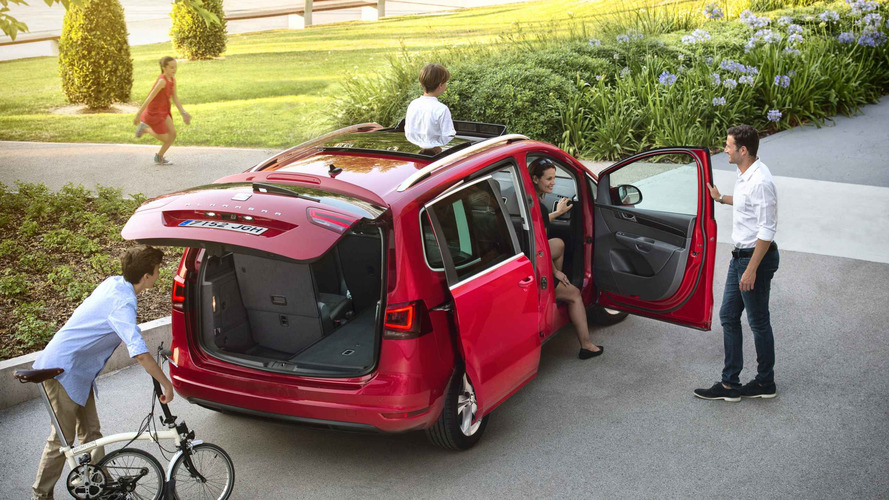 When the Alhambra took the Euro NCAP test in 2010 it scored a full five stars, and performed especially well for adult and child occupant protection, with 96- and 80 percent respectively. As standard, all Alhambra models get ESC with emergency brake assist, tyre pressure monitoring system, hill hold control, and multi-collision braking system. Inside the cabin there are front, side, and curtain airbags, as well as a knee airbag for the driver. From the SE grade, there is cruise control, high beam assist, auto headlights, and rain-sensing wipers. 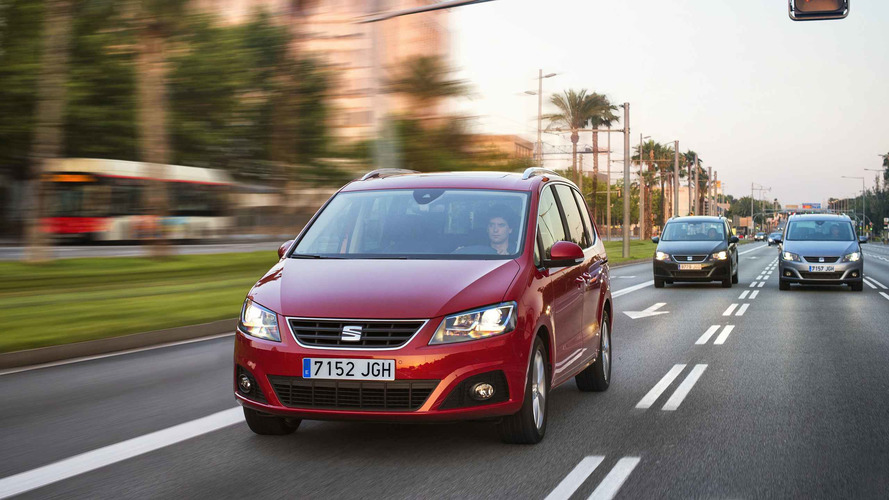 There are nine paint colours to choose from for the Alhambra, and these are available on all specification grades. Just two, Urano Grey and Pure White, are non-metallic. Aside from the bright Romance Red, the remaining metallic paint options are more subtle hues. Reflex Silver, Indium Grey, and Deep Black have widespread appeal, but if you fancy something a little different you can choose from Night Blue, Black Oak Brown, or Moonstone Silver.

Seat offers five specifications in the Alhambra: S, SE, Connect, SE Lux, and FR-Line. The entry-level S model is priced from £25,380 and is available with either the 1.4-litre TSI or 2.0-litre TDI engines for £27,560. As mentioned above, the S specification comes with a good level of standard equipment. SE versions (from £27,610) add 17-inch alloy wheels, rear privacy glass, chrome roof rails, front fog lights with cornering function, a leather steering wheel, integrated sun blinds in the rear doors, and foldable tables on the backs of the front seats.

The Connect model is aimed at tech lovers who like to be connected, as it features the MirrorLink system and also comes with a Samsung Galaxy A3 smartphone. Its exterior gains 17-inch ‘Dynamic’ Atom Grey alloy wheels with matching grey door mirrors that have integrated LED indicators, and sports-style comfort front seats, along with ‘Connect’ branded key fobs and sill plates.

Should you want a model that looks sportier, then the FR-Line is the specification to choose. Priced from £34,060, this version rides on 18-inch alloy wheels with self-sealing tyres and also gets stiffer sports suspension. Contrasting grey door mirrors, FR-Line decals on the lower section of the doors, with similar branding on the sills and front seats mark this out from most MPVs. If you’re choosing the FR-Line for its looks rather than performance, then you can stick with the 150hp 2.0 TDI engine to keep costs down.

Overall the Seat Alhambra isn’t much bigger than your average large SUV, so it can fit into car parks and regular spaces with relative ease. While the sliding rear doors are practical, the tailgate does require a bit more room to open. 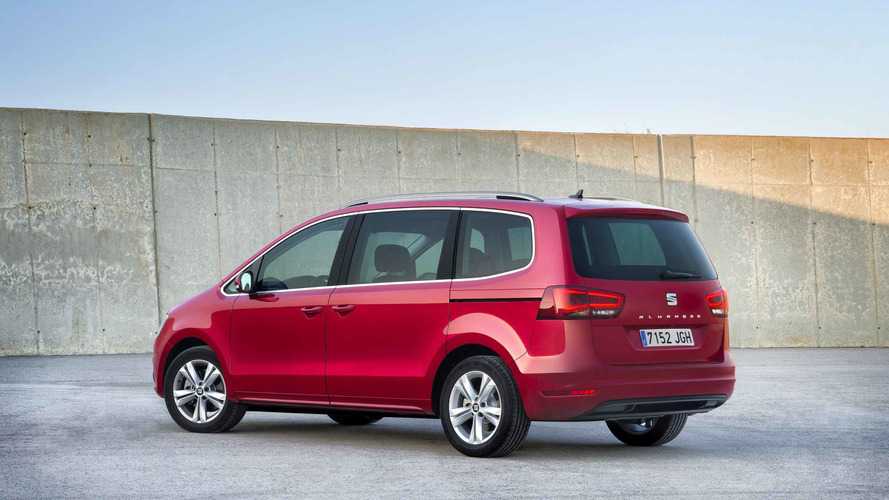 The average combined 53.3mpg for the 150hp 2.0 TDI’s engine isn’t too far from the real 40-plus mpg that you should expect to get. The automatic DSG transmission doesn’t add any noticeable benefits to fuel economy, so its premium can only be justified by the convenience factor. There is not a lot of difference (other than cost) in choosing the more powerful 184hp diesel engine, as both engines have almost the same emissions of 137- and 139g/km, so there’s no difference in VED or Benefit-in-Kind company car tax.

The Alhambra has been around for a several years and it shares its engines with many other models. It also doesn’t use any particularly new or complex electronics systems, so over time, the Seat should be mostly trouble-free.

For added peace of mind, Seat offers the usual three-year/60,000-mile warranty with its new cars. It also provides the possibility of purchasing an extended warranty to last up until the end of the fourth year/up to 75,000 miles or to the end of the fifth year/up to 90,000 miles. On top of this is Seat’s service plan that lets you pay for your car’s servicing over 18 months for the first two years of cover. 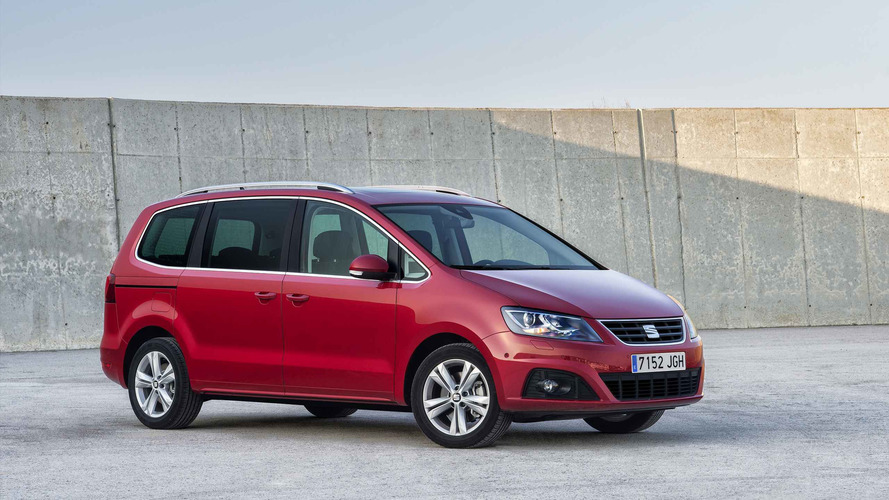 The Alhambra starts at £25,380 for the 150hp 1.4 TSI S, but it is the more expensive 2.0 TDI SE model at £29,540 that is likely to appeal to more buyers. When you move further up the specification grades you do get more equipment, but the price isn’t all that much lower than its more premium Volkswagen counterpart. When you then compare it to others such as the Citroen (Grand C4 Picasso) or Renault (Grand Scenic), it can look a little pricey.