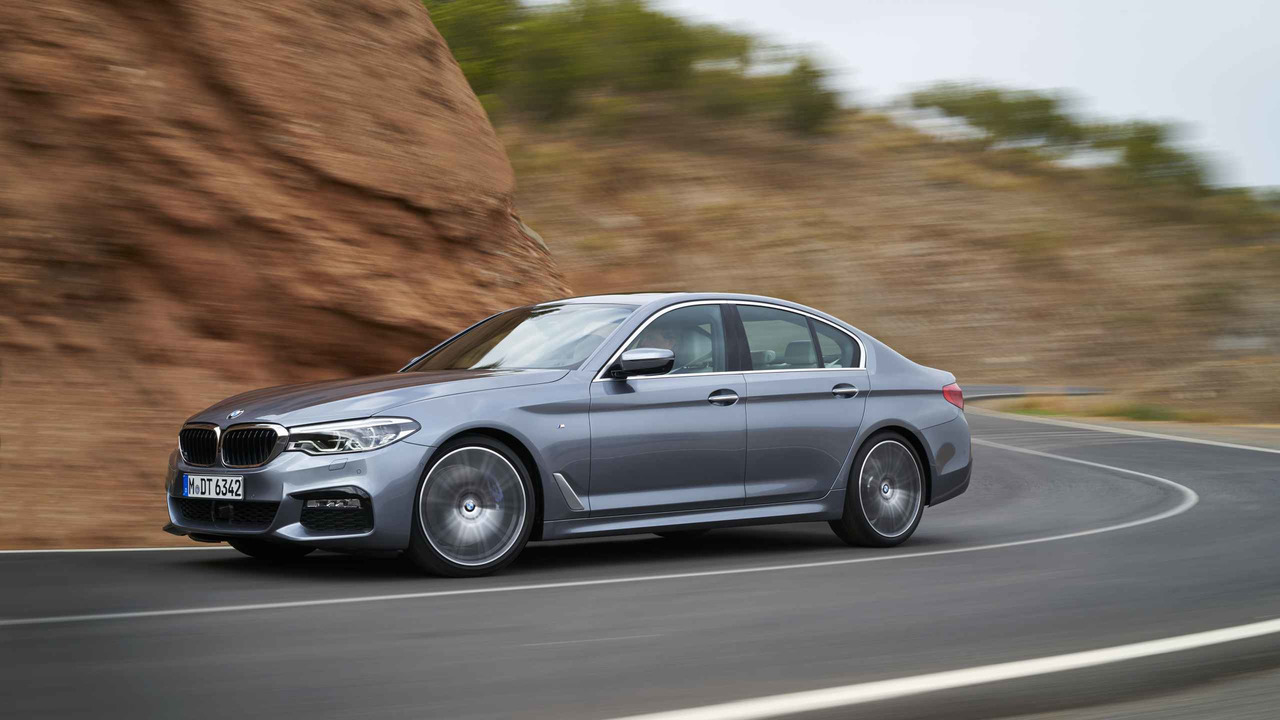 Taking the best and making it even better.

The BMW 5 Series has always been the yardstick by which the midsized executive segment has been measured and, despite the improved performance of some heavyweight competitors, this seventh-generation car takes up its rightful position at the top of the class. It comes with an entirely turbocharged engine line-up, with a mix of powerful petrol engines and frugal diesels, and for the first time ever for a 5 Series in the UK, xDrive four-wheel drive is offered. Every car is equipped with an eight-speed ZF automatic gearbox and the level of standard technology on even base models is incredibly high, making the BMW 5 Series undoubtedly the best executive car you can buy right now.

Did you know? While this is the first UK 5 Series with xDrive, it’s not the first with four-wheel drive, as a few 525ix models were imported in the 1980s and 1990s.

The BMW 5 Series has long been the car to which every other executive machine has been playing catch-up. Successive generations of Audi A6 and Mercedes-Benz E-Class have come and gone, without threatening to usurp the king from the throne. Yet, recent developments within these two companies – as well as quality cars like the Volvo S90 and Jaguar’s XF – suggested that the Mk7 Five wasn’t guaranteed to continue ruling the roost in a segment it has dominated for decades. But BMW knows what it is doing. What it has served up with the latest 5 Series is a sharp-driving, comfortable, and technologically advanced four-door that blends everything you could feasibly want of a car into one attractive package. Pick one of the great diesel models and, slightly sombre exterior design aside, there is next to nothing to fault about the BMW 5 Series. It is a thoroughly magnificent machine in every respect.

Perhaps the one weak point of the BMW 5 Series is the styling, but that is not to say that this saloon is ugly. It’s unequivocally a nicer thing to behold than its immediate predecessor, and it is essentially a shrunken version of the handsome 7 Series, but it’s not a massively daring piece of design. However, cars in this class tend to be conservative and, really, only the Jaguar XF could be argued to be prettier.

Styling features of the 5 Series include twin round, spaced tailpipes on SE models – with M Sport cars and the 540i xDrive (no matter what trim grade) bearing trapezoidal items instead – an 'Air Breather' located behind the front wheel arch, and the marque’s characteristic 'Hofmeister Kink' integrated into the C-pillar. All versions get Active Air Stream kidney grilles, which can close or open flaps according to whether the car thinks it needs to save fuel or cool the engine, and headlights that are connected ‘seamlessly’ to said kidney grilles for the first time, to accentuate the Five’s width. Models with the higher Adaptive LED Headlights have the new BMW ‘Icon’ light signature, and alloy wheel sizes run from 17s on the 520d SE to 19s on the M Sport versions.

If the exterior is a case of ‘very good, if not excellent’, then the interior is a case of ‘marvellous, and beyond reproach’. Once again taking inspiration from the larger 7 Series, the 5 Series has a superb interior of the highest quality as a result. The materials used are fabulous and every car benefits from a three-spoke multifunction steering wheel trimmed in leather, Dakota leather seats, and a 12.3-inch high-resolution digital cockpit display that blesses the driver of the 5 Series with an instrument cluster of the utmost clarity. It’s a dazzling display of brilliance inside.

The 5 Series has grown in length and that means there’s a bit more room in the cabin, something that was hardly lacking in the old car. Only the ‘fifth’ seat, which is the centre item in the rear row, will be for occasional use, thanks to the transmission tunnel in the footwell, but four tall adults should have no difficulty getting comfortable within this limo. The driving position and mirrors are adjustable all ways, but the seats don’t move electrically as standard – that’s a cost option. As are 40:20:40 split rear seats, which BMW calls the Through-Loading System. The boot is slightly larger compared to the old 5 Series, now standing at 530 litres.

BMW Professional Multimedia Navigation on a fantastic 10.25-inch screen is standard across the board, and not only is it controlled by the flawless iDrive controller as before but it can now also be ‘swiped’ as a touchscreen – and the graphics flow in a lovely, slick manner that oozes class. BMW Emergency Call, Online Services, TeleServices, Bluetooth, and a DAB radio are all fitted to every 5 Series, but one glance at the options list here shows you just how seriously high-spec the BMW can be. Apple CarPlay support, enhanced Bluetooth with wireless smartphone charging, Wi-Fi preparation, and Online Entertainment are all inexpensive, as is Gesture Control – allowing you to control functions by pre-determined hand movements in the field below the rear-view mirror. We found it a bit of a faff in truth.

Then there are three upgraded sound systems: BMW Loudspeaker Advanced; a Harman Kardon premium set-up; and finally an utterly thunderous, 16-speaker Bowers & Wilkins surround sound system that – having experienced its terrific full-volume glory – does not distort at even the most insane levels of noise. It costs the best part of four grand, of course, but is worth every single penny. Additionally, Rear Seat Entertainment and a TV function can be specified in the 5 Series.

About the only disappointments here are these, and they’re all minor observations: the 530i model is a four-cylinder unit, not a six-pot; there’s no manual gearbox choice on any model; and, while M Sport cars look good, their firmer suspension ever so slightly affects the car’s ride quality.

Otherwise, this is a crushing display of supreme competence and driver engagement from a brand renowned for such things. The blend of chassis involvement and ride comfort is exceptional, while refinement is off the scale – wind and tyre noise are utterly barred from entering the passenger compartment. The eight-speed auto soon makes a mockery of any possible whinges about the lack of a manual, as it’s a delight in full self-shifting or manual paddle-shift modes, while the brakes, steering, and body control are all faultless. There’s no saloon of any size that drives as well as this, while the BMW is practically as comfortable as anything in the class – unless it’s on the M Sport suspension and big alloys, where it becomes firmer but not in the least bit unpleasant.

A range of superb engines, proven in other BMWs, form the launch line-up. There’s the four-cylinder 520d (190hp) and 530i (252hp) models, while six-cylinder units are represented by the 530d (265hp) and the 540i (340hp). The company’s xDrive all-wheel-drive system is an option on the 520d and 530d models, and standard equipment on the 540i, which takes just 4.8 seconds to hit 62mph from rest. Joining the range soon after launch are the EfficientDynamics version of the 520d with even more fuel-saving tech and a 530e iPerformance plug-in hybrid.

Standard equipment is generous, with clever airbags that only deploy according to how many people are in the car, as well as ESC, run-flat tyres, and a tyre-pressure monitoring system. But on the options list is every conceivable safety item, and one pack – Driving Assistant Plus – bundles most of them together. Expect (deep breath, now) Approach Control warning, Cross-Traffic Warning rear and front, Lane Change Warning (otherwise known as blind-spot monitoring), Lane Departure Warning, prevention of rear collision, speed limit information and a no-overtaking indicator, Active Cruise Control with Stop&Go, Crossroads Warning, Evasion Aid, Lane Change Assistant, Lane Keep Assistant with active side collision protection, Steering and Lane Control Assist (a semi-autonomous autopilot), and Wrong Way Warning.

If that’s not enough, add adaptive headlights (two levels on offer), a Head-Up Display, Dynamic Safety, High-Beam Assist, Parking Assist Plus (with Active Park Distance Control, a reversing camera, remote 3D view, and Surround View) – and even Night Vision, and Remote Control Parking; this last item lets you slot the car into tight spaces without even being in it. It’s remarkable stuff and, fully loaded, a 5 Series should be safer than practically anything else on the road.

BMW has dropped the intermediate Luxury grade of the old cars due to low take-up, which makes the 5 Series trims very simple: there’s SE, and then there’s M Sport. Aside from items we’ve already listed, SE packs alloy wheels (17 inches for the 520d, 18s for the other cars), dual-zone climate control, ambient interior lighting, cruise control with a brake function, Drive Performance Control switchable driving modes, LED headlights, parking sensors front and rear, and heated front seats. M Sport adds unique styling inside and out, the M Aero body kit being the obvious update, while alloys wheels are 18s on the 520d and 19s elsewhere. Anthracite headlining and M-branded details within lift the ambience, while more powerful M Sport brakes are fitted to all variants bar the 520d.

Bulletproof residuals, thanks to high levels of equipment and that BMW badge, and extraordinarily fuel-efficient diesels make the 5 Series a lot cheaper to run than you might think. Factor in Benefit-in-Kind costs of between 21 and 29 per cent, and insurance groups in a reasonable 30-41 bracket, and the Five looks even more tempting. Fuel economy starts at 39mpg and rises to almost 69mpg in the core range, as the 5 Series is up to 100kg lighter than its predecessor, while CO2 emissions are anything between 108- and 164g/km. The eco-champs are the 520d EfficientDynamics and the 530e, which return 72mpg and 102g/km, and 141mpg and 46g/km respectively.

As a brand-new car, reliability of the 5 Series is too early to call, but the old model was hardly a clunker, and the new version uses tried-and-tested engines and technology. Servicing is done on the condition-based system that means the car flags up when various consumables need replacing, while a Service Inclusive pack covers all servicing costs for the first three years or 36,000 miles.

The base model 520d SE kicks the range off at £36,000, which prices it about square-on with the Mercedes-Benz E-Class and Jaguar XF, yet BMW claims the Five’s standard-fit digital cockpit and satnav make it better value than its competitors, where such items are options. It also has the automatic gearbox from the get-go, which the Jaguar does not. At the other end of the scale is the 540i xDrive, at a little more than £46,500, placing it a little above the four-wheel-drive 530d.