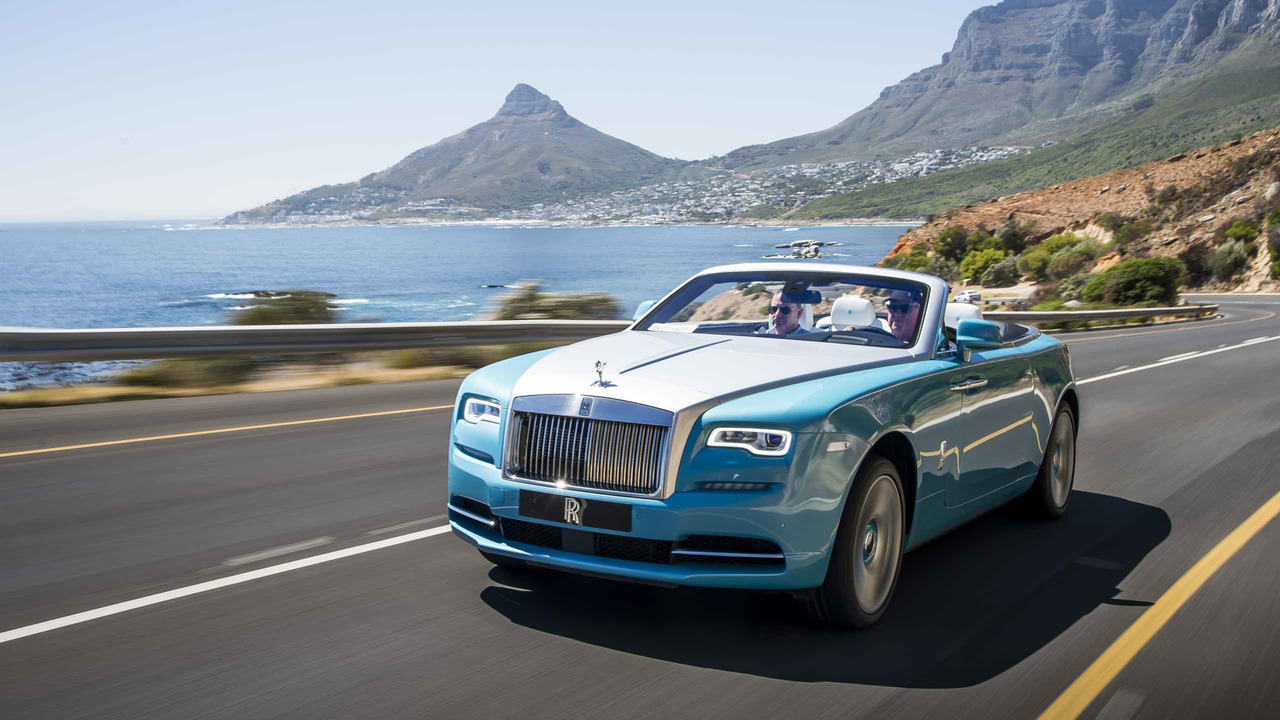 A convertible in the most luxurious sense.

A luxury convertible as only Rolls-Royce could make, the Dawn is a four-seat drop-top that’s opulent without being gauche, large without being domineering and as effortless to drive as any Rolls-Royce should be. It has not just the largest convertible roof in the world, but also the quietest, and it's as silent inside as the Wraith coupe, which it’s closely related to. Power comes from a 6.6-litre twin-turbo V12 petrol engine, which shifts this glorious hand-finished mass of luxury around with utter impunity. The Dawn is a majestic car, which might seem ludicrously expensive to ordinary people, but for its target audience (multimillionaires and billionaires) it's no more to buy the Dawn than it is to fill the fuel tanks in a super yacht. Not that they’ll ever have to make that decision, as they’d have both. And really, after sitting in one, you’ll not question why. Fabulous.

Did you know? The Dawn has the world’s quietest soft top, and it as hushed inside as its Wraith coupe relation.

Without millions in the bank, and more pouring in all the time, spending over quarter of a million pounds on a big, four-seat convertible might seem utterly preposterous. To its target audience it’s not, and, frankly, the price is inconsequential when your property portfolio runs to tens of millions, your boat costs much the same and you’ve a regularly-used helipad at your house. More frivolous than its saloon relations, it’s difficult to rationalise the Dawn until you truly experience it - only then does it begin to make sense. Every drive is an occasion full of glamour. There genuinely is nothing else in the world like it, and given the level of personalisation you can add to it each one will be as individual as the person who buys it.

The Dawn is a credit to Rolls-Royce’s designers, it treading the delicate divide between making a cultured, bold statement and overt, ostentatious excesses with real credibility. Yes it’s huge, making it difficult to ignore, but for all its scale it can be discreet, especially if you’re wise with the colour choices. There are some sensational surface treatments, such as rear-hinged doors that feature the subtlest vertical upswept crease that breaks up what would otherwise be a vast slab of bodywork. You can almost feel the thickness of the paint, while the fine coachline, a beautiful touch, is hand painted by one of Rolls-Royce’s hugely talented craftsmen and women. On top of that, the weight and warmth of the chromed handles that open the ‘coach’ doors into the opulent cabin underline why the Dawn costs so much.

It’s clearly related to the Wraith coupe, but Rolls-Royce claims that around 80 percent of its body panels are unique to it. The front projects that immediately recognisable Rolls-Royce grille, and the firm’s Spirit of Ecstasy mascot secrets herself into the top of that grille housing when you lock the car. On the road it is a constant reminder ahead of you that you’re in the most luxurious of the luxury brands, as not even Bentley can currently offer something to match the Dawn. The folding roof is, says Rolls-Royce, the largest convertible top on any car, folding away in a little over 20 seconds at speeds of up to 31mph. Doing so reveals the Dawn’s real beauty, and allows everyone a glimpse at the incredible luxury within. It's an event, a frivolity even, but one that’s difficult to ignore.

At this level only the best will do, and the best is what buyers get. Rolls-Royce might borrow some of its electronics from BMW, but it’s so beautifully integrated that you’ll forgive it that foray into the world of the hoi-polloi for the ease of functionality it brings. The rest is pure Rolls-Royce, which means over-specified; no surface lacks in tactility, from the spongy thickness of the lambs wool carpets at your feet, to the soft leather hides that cover the near infinitely adjustable heated and ventilated seats. The air vent controls are chrome organ stops, and pulling them is a joy; the heater controls themselves - for each individual passenger - are delightfully old-school in their operation. Likewise the steering wheel (which feels huge by today's standards), the delicate column-shifted transmission, wiper and indicator stalks all at odds with the sheer scale of everything else on the Dawn. Obviously all the materials inside can be specified in any colour or type that takes your fancy; at this level customers expect to have every whim catered for, and Rolls-Royce is only too happy to oblige.

It’ll seat four in huge comfort, and the Dawn is a genuine four-seater rather than an occasional 2+2, so there's plenty of legroom even behind a tall driver. The only complaint you might have as a rear seat passenger is that the thickness of the hood means with it up you’ll not have a great view out. It’s super-hushed with the roof in place though, so much so Rolls-Royce measured it and compared it to the Wraith coupe, and it's just as quiet as its hard-topped relation. The folding mechanism for that thick, acoustically dampened hood does impact significantly on the boot space, however, so the luggage capacity is more squashy bags rather than suitcases, though you’ll squeeze a couple of golf bags in there at a push.

That link to BMW’s electronics means the Rolls-Royce is bang up to date with technology, despite it reeking of old-world, high luxury tradition. There’s an easily navigated large centre screen, which is operated via a touch sensitive wheel on the transmission tunnel in a manner that’ll be familiar to any premium car owner. There’s plenty of connectivity within it, so you can play whatever tunes you like via either the HDD system or streaming from your phone, and the standard 16-speaker stereo sounds absolutely fantastic.

There’s USB connection, a DVD and CD player, satellite navigation, a surround camera with side, rear and top views, and plenty more besides. It’s not the modernity that’s so appealing though, it’s some of the traditional detailing, such as the umbrellas positioned by the door catches in holsters within the front wings, those amazing coach doors with their electrically powered closing that you’ll get excited about.

It’s rude to talk about a lady’s weight, but the Rolls-Royce Dawn tips the scales at over 2.5 tonnes. Not that it feels it on the road, as the 6.6-litre twin-turbo V12’s 571hp and 575lb ft of torque from just 1,500rpm shifts the Dawn with an effortlessness that’s as beguiling as it is impressive. Nothing as conventional as a rev counter inside, either; instead, the Power Reserve meter sees the Dawn cruise at 70mph with barely over 10 percent of its engine’s output being required. You’ll never need to, but push the accelerator to the floor and ask for more than that and the engine will return indecent pace, 62mph arriving in 4.9 seconds from rest; hard acceleration is backed with only the distant, background suggestion of a roar from that V12 under that massive bonnet. It’ll go fast, then, but doing so is like running in a dinner suit and hand-crafted brogues - possible, but ridiculous.

That’s true of the handling, too; for a huge, heavy car the Dawn feels surprisingly agile. That massive steering wheel is not quick in its action, but the car is faithful in its eventual response, though the eight-speed automatic doesn't offer anything as proletariat as a manual override. Nor does it need one, as the engine and transmission work in quiet unison, whatever you ask from them. Unsurprisingly the ride quality is impeccable, it riding with supple composure over all but the worst surfaces, the body feeling tightly controlled, and stiff, too, which, given the huge chunk of metal missing above your head that might more usually add some stiffness to the structure, is very impressive indeed. You could spend days sitting in it, gliding from country to country in hushed, dignified silence and outrageous comfort, though you’ve probably a plane for that, and one of these at each of your houses, instead.

The Dawn might be loaded with traditional appeal, but it’s still got one eye on modernity when it comes to safety systems. The sheer scale of it will undoubtedly help should you be unfortunate to be in a collision, though there’s ABS with brake force distribution and cornering brake control, traction and stability control to help you avoid it damaging that expensive bodywork in the first place. There are front airbags, active front headrests for whiplash reduction, active rollover protection, and a tyre pressure monitoring system, as well as lane departure warning and forward collision warning.

Pick any, as Rolls-Royce can accommodate it, and if you’re indecisive you can have a two tone finish, with coach lines painted on, a brushed metal finish bonnet, and pretty much anything else you desire.

There’s one, with the exception of the occasional special edition Rolls-Royce makes a few of once in a while. The standard specification is huge, though equally, so is the opportunity to add to the list price with options, and Rolls-Royce is happy for you to indulge, so it's easy to push the cost up to £300,000 without trying, but in this sphere that’s expected, and enjoyed by prospective owners.

This car is vast. Think of it as a land-based tender for your superyacht though and it feels smaller…

Really? This just isn’t even a consideration, though the quoted 19.8mpg isn’t actually that unrealistic; in our time in one over 200 miles on all sorts of roads the trip computer displayed an average of 19.2mpg overall, which is closer than you’ll get in most cars to the official figure. As this is a quarter million pound (minimum) purchase, running it isn’t going to be an issue, on any level.

Variable servicing via the car’s computer.

The £264,000 list price is a starting point, and the money is irrelevant. There’s near infinite personalisation, and consider that owners might buy one as a gift, or a treat instead of a boat, artwork, handbag, watch or jewels and it all rather puts it into perspective. Indeed, compared to a diamond, or Hermes Birkin handbag it looks positively inexpensive…