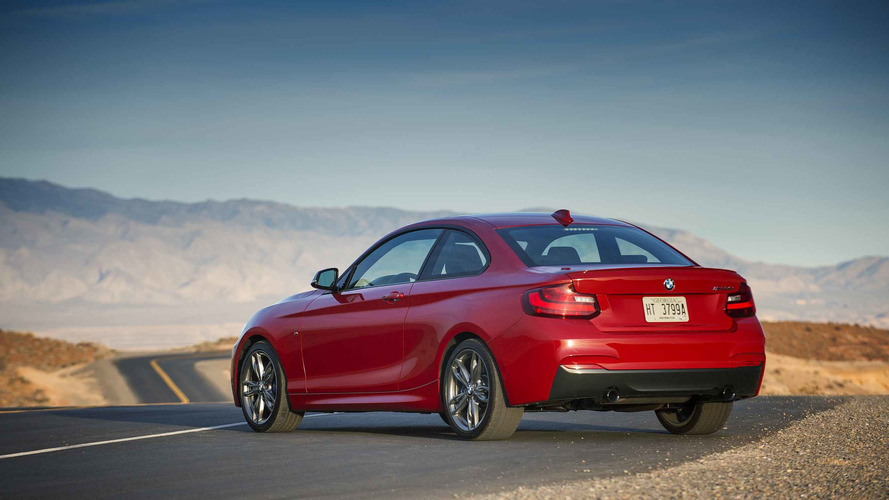 The smallest coupe in the BMW family.

The BMW 2 Series Coupe is part of the sportier group of cars that use the underpinnings of the 1 Series hatchback, and its focus is on driving pleasure ahead of practicality. However, it still has space for four people inside and a big boot at the back, and it comes with a wide range of turbocharged petrol and diesel engines. Although the vast majority of 2 Series Coupes are rear-wheel drive, BMW’s xDrive four-wheel-drive system is offered on a solitary diesel variant, and the standard gearbox through most of the range is a six-speed manual – with an eight-speed paddle-shift automatic also available. Four trim levels ensure there’s a good variety of choice for the potential 2 Series Coupe buyer.

Did you know? The 2 Series family is broader than the 1 Series on which it is based, with Convertible, Active Tourer, and Gran Tourer cars also available.

The BMW 2 Series Coupe slugs it out with the Audi TT for the compact coupe class honours. It’s not the prettiest thing in the world but it does at least look suitably different to, and sportier than, the 1 Series hatchback to which it is related. Yet the BMW maintains more practicality than the TT, and it comes with one of the company's typically brilliant rear-wheel-drive chassis, which makes even middling diesel models feel superb to drive. With strong, punchy engines, plenty of equipment to boost the line-up’s prestige appeal, and prices that aren’t massively in advance of the 1 Series, the BMW 2 Series Coupe is the sort of real-world performance car that should be on everyone’s shopping list. And, to seal the deal, the M240i range-topper is an absolutely blinding machine.

We can commend the BMW 2 Series Coupe for not simply being the three-door version of the 1 Series five-door hatchback; it has completely different styling, even at the front where you might think BMW would have been tempted to use the same lights, kidney grilles, and panels. So the 2 Series looks suitably rakish, although on the other hand it’s not exactly pretty – ‘moderately handsome’ would be a fairer assessment. As it’s a sporty car, BMW offers even base models on 17-inch alloy wheels and gives them LED rear light bars, while the next grade up is distinguished by twin-exit exhausts, a star-type design of 17-inch wheel, and High-Gloss Black inserts in the front and rear bumpers. Nevertheless, as with so many BMWs, it’s the popular M Sport trim that makes the 2 Series Coupe look its best, as it features an aerodynamic, beefy body kit, 18-inch alloys, and M badges on the front wings. The M240i is distinguished by various smoked black details and its own bespoke design of 18-inch rims.

It’s very similar to a 1 Series inside, which means it's intuitively laid out, made of high-quality materials, and features the iDrive infotainment interface, which makes almost every other control system in the industry look clunky and needlessly obtrusive – bar Audi’s MMI, which gets fairly close to BMW’s system for usability. Again boosting its sporty nature, BMW fits a Sport-grade, leather-trimmed, three-spoke multifunction steering wheel to basic SE models, but Dakota leather seats as standard are restricted to the M240i only; it’s cloth, or cloth and Alcantara for the other models, with cow hide requiring additional outlay.

BMW hasn’t tried to shoehorn five seats into the two-door body of the Coupe, so there’s just a pair of chairs in the back. At least occupants there will enjoy more elbow space, and it’s not too bad for head- or legroom either. The 2 Series also has a relatively huge boot for this class of car, with 390 litres accessed via a hatch that’s a good shape for loading bulky cargo. And there’s a through-loading option that allows longer items to encroach into the passenger compartment.

While the 2 Series Coupe has a good driving position, the offset pedals notwithstanding, and adjustability of the seat/steering wheel on all models, it’s a shame that both lumbar support and electric adjustment are universally cost options. Rear three-quarter visibility isn’t too hot, thanks to thick C-pillars, but rear parking sensors are standard from the base cars.

Base 2 Series Coupe models come with Bluetooth, a USB connection, the BMW Professional Radio with a CD player, DAB, and MP3 compatibility, BMW ConnectedDrive services, and satellite navigation on a 6.5-inch display as standard. But the grander Professional Nav mapping on the 8.8-inch display is part of a package that brings Online Entertainment, Remote Services, and a full black-panel display; that latter item is standard on the M Sport, though, and it makes the instrumentation in the cluster invisible, until the car’s ignition is switched on.

Apple CarPlay preparation, wireless phone charging, and a reversing camera are all extras throughout the range, albeit they only cost a few hundred quid each, and two sound systems are offered as upgrades: the BMW Advanced Loudspeaker, and a more powerful Harman Kardon set-up.

The BMW’s real forte is its handling. Compact, reasonably lightweight, and in the main rear-wheel drive, it provides a dynamic experience that few cars in this class can match – even similarly rear-drive vehicles like the Nissan 370Z and Toyota GT86. The most exciting version (excluding the standalone M2) is the M240i, as it should be, as it packs the only six-cylinder engine of the range, and it features such dynamic items as M Sport Suspension with a unique set-up for this variant, Variable Sport Steering, an M Sport braking system, and its own model-specific M Aero pack with Ferric Grey front air blades.

But while the M240i is a real show-stopper, drive even a middling 220d model and you’ll be amazed by the way the BMW grips the road with confidence, feeding back plenty of useful information to its driver. Better still, it doesn’t fall down as a regular-use vehicle, because the ride quality is excellent on all versions – and you can improve the comfort levels further by fitting adaptive dampers.

Performance is impressive across the board, as even the slowest Coupe – the 218i automatic – can hit 62mph from rest in less than nine seconds. All engines are smooth and powerful, with plenty of torque for all models thanks to the twin-scroll BMW turbocharging, and whether you go for the six-speed manual transmission or the super-slick, glorious eight-speed ZF automatic option, you’ll be delighted with the gearbox. The auto is standard fit on the most muscular diesel, the 225d, and it’s also fitted to the one four-wheel-drive 2 Series Coupe, the 220d xDrive – but, to be honest, most don’t need the all-corners traction with the BMW, as it just makes the car heavier, thirstier, and more expensive to buy.

A good standard specification of safety equipment is offered throughout the 2 Series range and, while it hasn’t been tested by Euro NCAP, it’s broadly similar in outlook to the 1 Series, which has a five-star award from the crash safety organisation. Traction control, anti-skid technology, multiple airbags, automatic lights and wipers, a tyre-pressure monitoring system, a speed limiter, and – a nice touch, this – heated mirrors and washer jets are fitted to all cars. Adaptive headlights, radar cruise control, speed limit information displays, and an assortment of electronic driver-assist safety functions are all on the options list.

Sport and SE 2 Series Coupes can be finished in 12 colours, while the M Sport and M240i versions have just half the palette to select from. The hues shared by all cars are no-cost Alpine White solid, and then four metallic paints, which are Black Sapphire, Glacier Silver, Melbourne Red, and Mineral Grey. The M Sport and M240i have one colour exclusive to them, which is Estoril Blue metallic.

For the Sport and SE cars, another ‘free’ flat paint is offered, which is Jet Black, and then additional metallic finishes are Deep Sea Blue, Midnight Blue, Mineral White, Moonlight Silver, Sparkling Brown, and Valencia Orange.

These run SE, Sport, M Sport, and then M240i. Only the 218-badged cars can be found at SE level, where air conditioning, front fog lights, and rear Park Distance Control are among the standard toys. Sport is a mid-grade that sees the Sport leather steering wheel of the SE adorned with red stitching, while the Drive Performance Control switch benefits from an fourth mode called ‘Sport+’. Also included at this level are High-Gloss Black trim with a Coral Red finisher, a Sport instrument cluster, front Sports seats, and a different ‘Track’ pattern for the cloth upholstery.

M Sport brings in not only the external styling we’ve already outlined, but plenty of interior gewgaws as well. These include M-branding for the door sills, gear lever, and M Sport steering wheel (now trimmed in Nappa leather), alongside Anthracite headlining, Hexagon cloth/Alcantara seats, and Aluminium Hexagon dash trim with an Estoril Blue finisher. Additional toys are a headlight wash feature for the upgraded Xenon headlights.

M Sport+ is a package to build on this grade. For a reasonable outlay, it bundles together the Harman Kardon sound system, an M rear spoiler, M Sport brakes, sun protection glass, a grey-shaded top-band windscreen, and Ferric Grey-coloured 18-inch wheels.

The M240i has its own high-end specification, much of which we’ve already detailed, but the two luxury items within are leather upholstery and dual-zone climate control.

The BMW 2 Series Coupe is a compact enough machine and isn’t much bigger than an average hatchback. The height of the car marginally decreases on the M Sport models, and then again for the M240i range-topper.

Fuel economy is good across the board, because – discounting the special interest M240i – every 2 Series Coupe will return at least 43mpg with emissions below 150g/km, with the best of them turning in more than 67mpg and just 111g/km. The M240i, for reference, is the thirstiest car at 36mpg and slightly less than 180g/km for CO2, when equipped with a manual gearbox.

All cars are built to a lightweight ethos and have EfficientDynamics fuel-saving measures in the form of Auto Start-Stop, Brake Energy Recuperation, an Eco Pro drive mode setting, and electric power steering. Except for the M240i, the 2 Series Coupe is fitted with reduced-rolling resistance tyres, and all manual models come with an optimum shift indicator.

Every 2 Series Coupe falls into an insurance bracket that runs from group 20 to 39, while Benefit-in-Kind company car tax is anything between 21 and 32 per cent. As with all BMWs, strong residual values make the 2 Series a solid purchase for private and business users.

The 2 Series uses engines that are pretty widespread in the BMW Group and there are no obvious, glaring problems with any of them, although owners report the car’s overall reliability to be merely average, rather than exceptional. Like every modern Beemer, the 2 Coupe has a Condition-Based Servicing system, which basically means the car tells its owner when it needs to go into the dealership for a check-up. The fixed-fee Service Inclusive package covers all servicing costs for the first three years/36,000 miles of ownership and it’s well worth having.

The 2 Series is a little pricier than the 1 Series upon which it is based, and that’s understandable as most manufacturers charge extra money for less practical but more desirable cars. The thing is, the increases from One to Two are not huge, so the Coupe – prettier than its hatchback sibling – looks like a better deal. It gets an enhanced specification anyway, simply as a result of being the sportier brother, and with the entry point sitting at less than £24,000, it makes the Audi TT (which kicks off at around £28,000) look overpriced. Although it’s the most expensive 2 Series Coupe at more than £35,000, the M240i is so blinking good as a sports car that you’ll wonder why you need to shell out another 10 grand for the ultimate version of this model line – the M2.