Jaguar's competitor to the BMW 3 Series.

Jaguar had to, eventually, get back to competing with the BMW 3 Series. A luxury brand looking for 21st century success simply couldn’t survive without a solid compact sports saloon in its ranks. The stakes were high though, especially because Jag’s last stab at a 3 Series rival, the X-Type, wasn't very good. Thankfully, the XE is rather better. A lot better. Competitive with the 3 Series? Just about, although there are caveats over cabin size and quality.

If you’re a car enthusiast, it’s very hard not to get caught up in the magic of the Jaguar name and the XE’s low-slung, rather handsome styling. Indeed, many people who don’t really care about cars at all will have their heads turned at the mere mention of the Jaguar name. Thankfully, then, the XE is a good enough car to live up to the hype, albeit one that does have some significant flaws. It’s sufficiently sharp and rewarding to drive that it actually nudges ahead of the mighty BMW 3 Series, but it loses ground when it comes to practicality, quality and refinement. 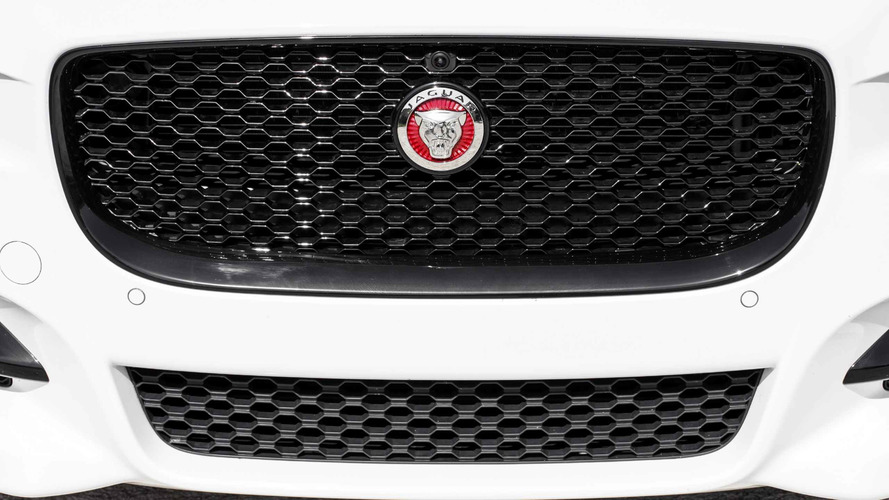 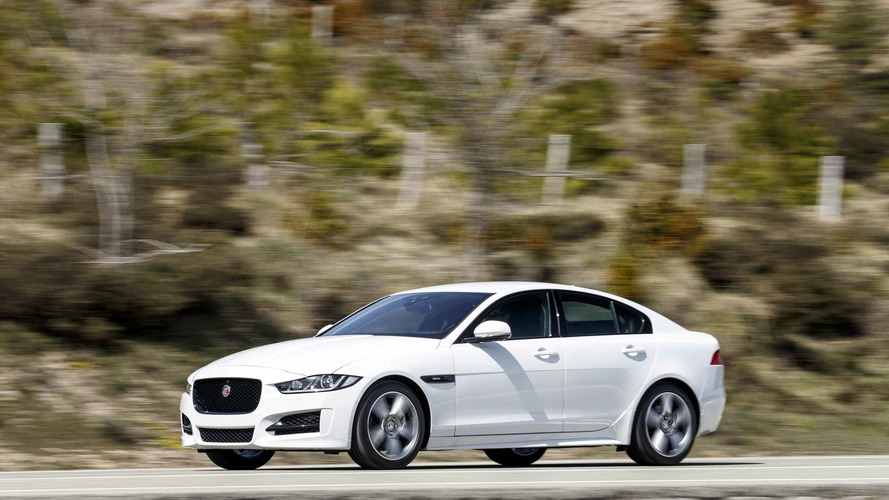 At least, if the rear seats are small, there is visual compensation on the outside. Jaguar is, ever so slightly, getting into BMW’s ‘cookie-cutter’ approach to styling, where an XE looks much like an XF, whose front looks a bit like an XJ's, but Jaguar design chief Ian Callum says that’s a deliberate move to build better brand awareness, to get people to recognise the car as a Jaguar first and foremost, and worry about which model it is later on. For the most part, it works – the XE looks very low, sleek and broad at the front, and that wide, shallow radiator grille has something of the look of a fighter jet from the fifties about it. The glowering lights are neatly picked out with J-shaped LED running lights and in almost any colour the XE looks sharp.

At the back, aside from the badge, you can tell the XE apart from the bigger XF by its tail-lights. The XE gets but one semi-circular LED detail in the brake lights, the XF gets two. The styling does tend to blandness at the back, though, and from a distance it can be hard to tell the XE apart not merely from the XF, but from a host of similar mid-size saloons.

This is where the XE starts to fall down. Jaguar tried to take the understated, simple interior of the 2008 XF (arguably the first truly modern Jaguar in more than three decades) and update it for the 21st century in a smaller package. Many of the XF’s design traits were carried over – deeply dished main instruments and a speedboat-style line that runs from the top of the doors around the base of the windscreen – but the overall effect is one of cheapness. The whole cabin just looks rather too plain and too simple. Ignore the leaping cat on the steering wheel and you could be sitting in a Hyundai. There’s little wrong with the quality or the fit and finish, but there’s equally nothing that says ‘Jaguar’ in here, badges apart. You can lift the environment a little by going for expensive leather options or the 10-inch InControl Touch Pro infotainment screen, but you’re fighting a losing battle. The Audi A4 and Mercedes C-Class leave the XE in the dust for cabin ambience.

The 455-litre boot is about on the money for the sports saloon class, and is decently practical, but the rear seats are quite simply tiny. Even in a class of car that traditionally looks after those in the front before those in the back, the XE’s rear seats are exceptionally small, and the way the bodywork and the outer edges of the rear seats sweep around in a bath-tub shape eats into shoulder room. Headroom is OK, but legroom is seriously restricted if the front seat occupants are tall. 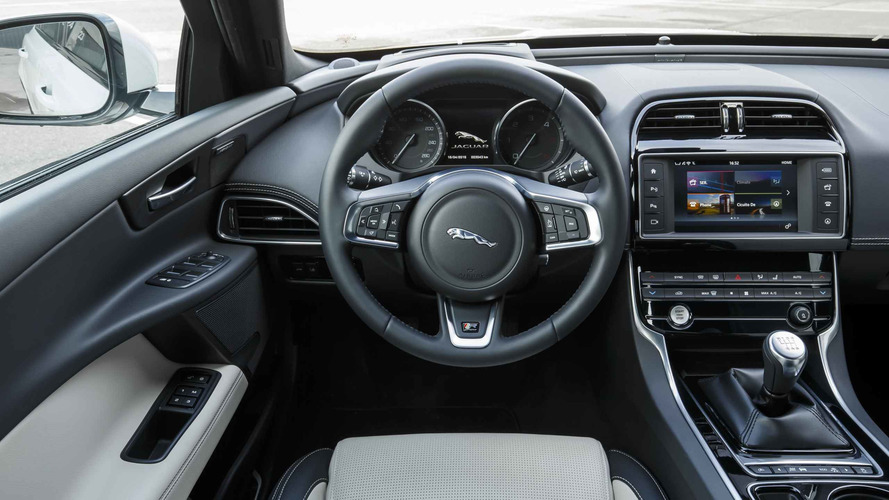 Jaguar has been making strenuous efforts to up its game in the infotainment department over the past five years, but the XE’s basic eight-inch InControl Touch central screen is still a little disappointing. The graphics mostly look good but it can be too slow in operation. Much better is the ten-inch InControl Touch Pro system, which looks much classier and is faster and better to use.

All models come with Bluetooth, DAB radio, USB, sat-nav and a text-to-speech SMS reader. You can upgrade that to a Connect package, which comes with InControl apps that connect to your smartphone (no Apple CarPlay or Android Auto yet), a remote phone app that can lock and unlock the car and start the engine and which keeps track of your journeys, and an optional Wi-Fi hotspot.

Touch Pro brings the 10-inch touchscreen, a 12.3-inch TFT screen for the main instruments, a 10-gigabyte music storage hard drive, a ‘Dual View’ screen that allows the front seat passenger to see a different display to that of the driver, and pinch-to-zoom controls for the sat-nav. You can upgrade that to Connect Pro, which comes with a route-planner companion which allows you to plan a journey on your smartphone and send the details to the satn-av, live traffic data, journey sharing technology, street-level imagery of your destination, and a system that learns your regular routes and can advise you of delays and detours even when you don’t have a destination entered.

You can also choose from two high-end Meridian sound systems – a 380-watt version with 11 speakers or an 825-watt Surround Sound version with 17 speakers. 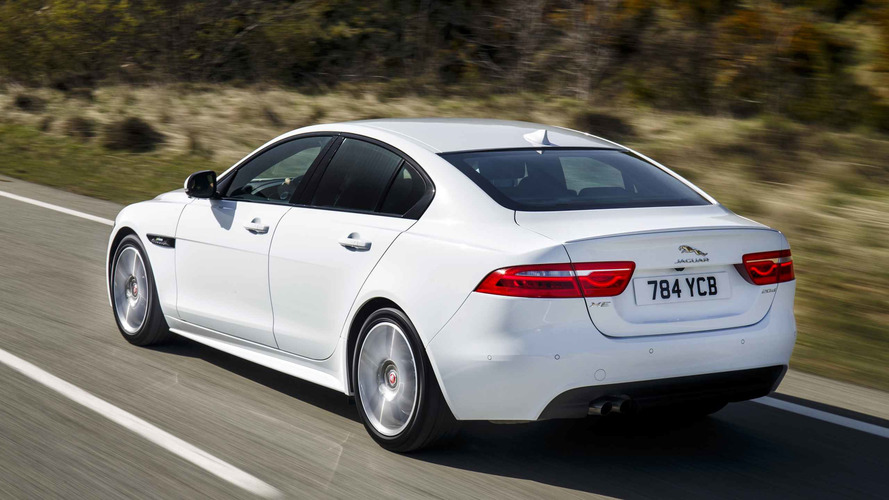 The XE has one small disappointment waiting for you and that’s its refinement. We know that the four-cylinder Ingenium diesel engine can be refined and hushed, because it is in the Land Rover Discovery Sport and in the big Discovery. Here in the XE it’s simply too noisy, although we've found it quieter in some XEs than others, and that’s in a class where cars such as the Mercedes C-Class, BMW 3 Series and Alfa Romeo Giulia are also more vocal than they should be. Admittedly it’s smooth and relatively free from vibration, but a near-silent Audi A4 TDI leaves the XE for dead in refinement. And don’t get us started on the hushed Lexus IS 300h hybrid…

Performance from the 180hp diesel is more than sufficient for most purposes, but it would be hard to resist the temptation of the more powerful 240hp twin-turbo version, which has serious thrust – a 5.8-second 0-62mph time versus the 180hp’s 7.4 seconds. The basic 163hp is hardly a slouch though, with a best 0-62mph time of 7.2 seconds. Four-wheel drive is available only with the 180hp diesel, oddly, and manual transmission only with that engine and the entry-level 163hp unit.

The new Ingenium petrol engines are impressive too: 6.7 seconds 0-62mph for the 2.0-litre, four-cylinder unit with 200hp, and a 5.8-second time for the 250hp version. But, of course, the supercharged V6 S takes the cake here, with a 4.8-second 0-62mph time, and better still it does so with a growling, crackling exhaust note that will bring a tear to the eye of a true car nut. The V6 S is almost quick enough, and certainly good enough to drive, to warrant comparison with the much more expensive BMW M3, in fact. This is a great engine with a great sound: it’s a little quieter in the XE than in the F-Type sports car, but that’s like saying that mortar fire is quieter than a full-on artillery barrage. The growls, spits, roars and bellows that the V6 makes verge on the comical, but they're always entertaining and enjoyable.

Jaguar has for many years been the maestro of mixing the qualities needed for both sharp handling and a comforting ride, and the XE continues that tradition brilliantly. The steering is relatively lightly weighted but has plenty of feedback and feel, and the variation of its weighting into and through corners is just sublime. The handling balance is terrific as you power through the bends, and  the XE never leans excessively. It stays composed over lumps and bumps, too, but it’s also gently-enough sprung that urban pockmarks never, or at least rarely, jar or disturb. 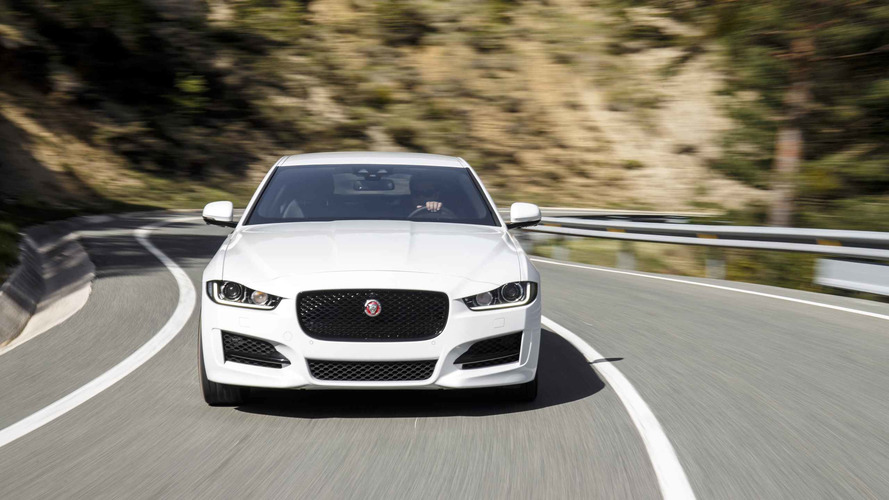 It is also, and this is not hyperbole, loaded to the gunwales with electronic safety kit. All models come with six airbags, electronic stability control, autonomous emergency braking, lane departure warning, traffic sign recognition, trailer stability control, emergency brake assist and two ISOFIX points for child seats in the rear. To that can be added radar-guided cruise control with autonomous traffic jam assistant, active parking assistant, blind spot monitor, surround camera system, lane-keeping steering and Intelligent Driveline Dynamics, which is an advanced form of traction control. There’s also the option of All Surface Progress Control, developed by Jaguar’s sister company Land Rover, which can get you moving smoothly on slippery surfaces. 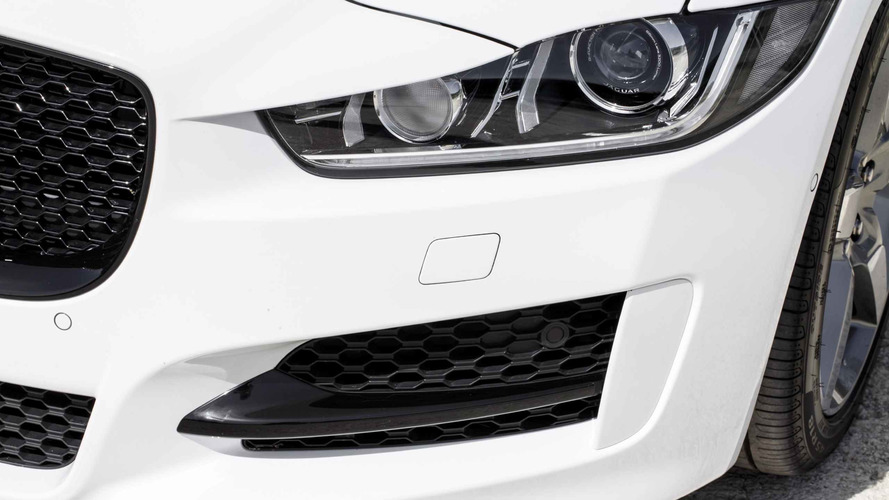 There is also a huge choice of alloy wheels (up to 20-inch in size), and a broad list of cabin colours and finishes, including 12 different leather colours, five different wood finishes and four different types of aluminium trim, as well as carbon-fibre and piano black options.

A bonus of that tightly-dimensioned cabin is that the XE is one of the smaller cars in its class, although it is quite broad across the shoulders. 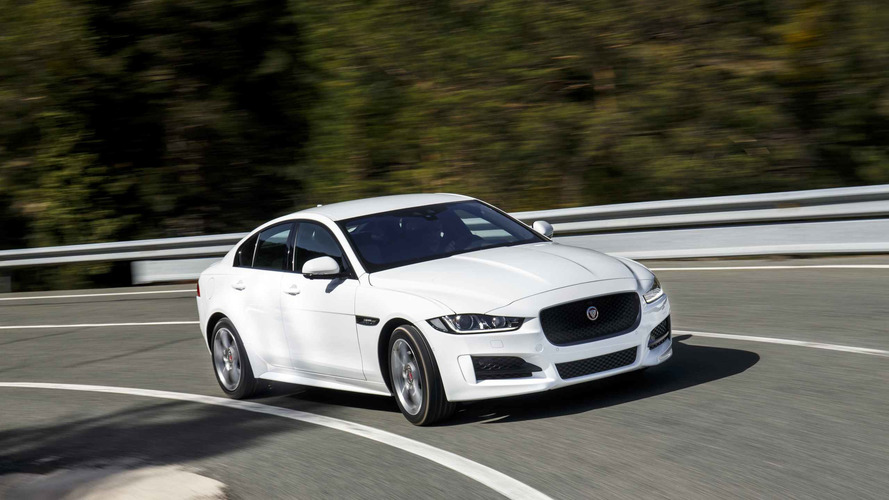 Jaguar went to the trouble to develop a family of brand new four-cylinder diesel engines for the XE (and in fairness for the rest of its range) and that shows in the official fuel economy figures. Thanks in no small part to the XE’s relatively light aluminium-intensive structure (albeit it’s only a handful of kilos lighter than a 3 Series at the kerb) the basic 163hp 2.0-litre ‘Ingenium’ diesel engine records 75.0mpg in manual form, or 68.9mpg with the optional eight-speed automatic. Emissions are 99g/km or 106g/km, respectively. The more powerful 180hp version records 67.3mpg with a manual, and 109g/km of CO2 while the automatic version has the same 67.3mpg, but CO2 rises to 111g/km. Those are hugely impressive figures, but you will struggle to match the official economy in the real world. Still, a lightly-driven XE should easily do better than 50mpg in daily driving, and may even stretch to 60mpg if you’re very careful.

Adding optional four-wheel drive to the 180hp engine knocks about 7mpg off and adds about 12g/km of CO2, while the more powerful 240hp twin-turbo diesel 2.0-litre scores 54.4mpg and 137g/km.

The XE has been recalled three times, for possible engine cut-outs and faulty seatbelts, but other than that Jaguar has been a paragon of reliability and quality in the past few years, making regular appearances at the top of the JD Power quality rankings. Jaguar includes a three-year, unlimited mileage warranty, and offers the option to extend that for 12 months, year-on-year. There’s also an MOT guarantee. 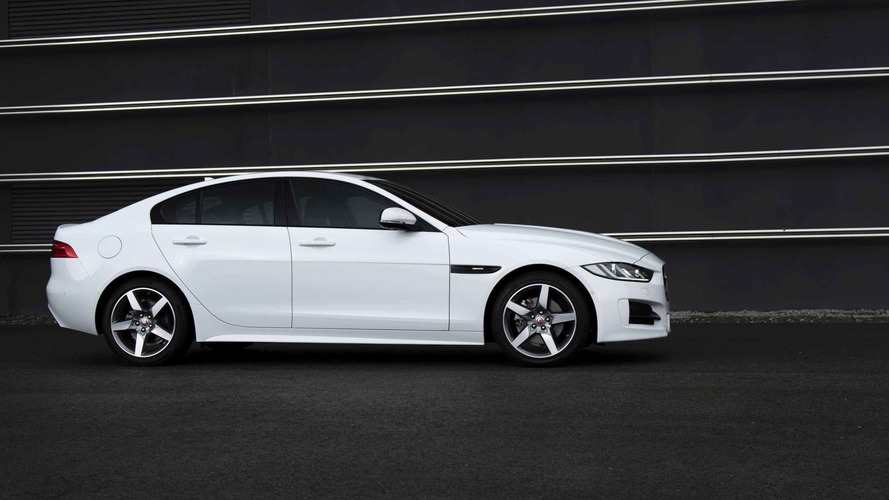 The XE’s pricing closely mirrors the majority of its rivals, with basic models starting from a little over £30,000 and a well-specified R-Sport 180hp diesel kicking off at around £33,000. The bargain in the range is the V6 S, which is nearly as quick as a BMW M3, more fun to drive and almost £10,000 cheaper to buy.