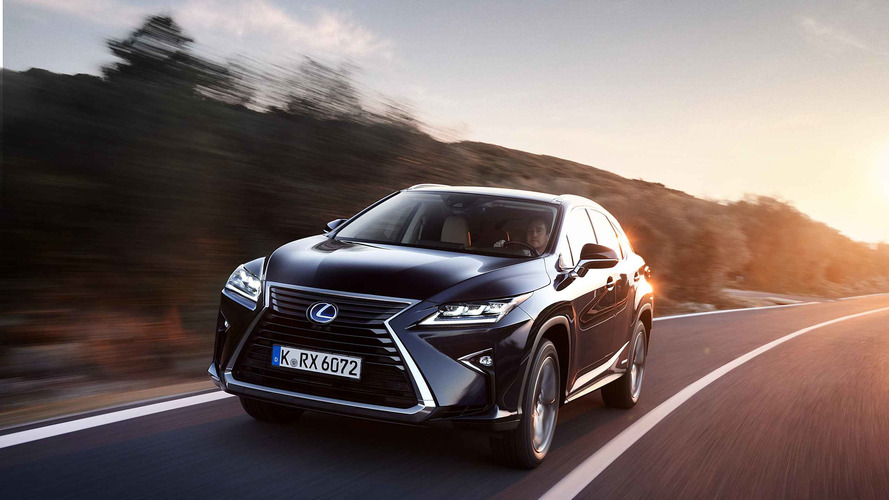 The largest of the Lexus SUV range.

Featuring a particularly striking and angular exterior, the Lexus RX is the Japanese luxury firm’s largest SUV. It comes with a choice of petrol or hybrid drivetrains, with no diesel version available, and – apart from one front-wheel-drive variant – all RXs are four-wheel drive. The petrol engine is paired to a six-speed automatic gearbox while the hybrid Lexus has a Continuously Variable Transmission (CVT) style automatic. The RX is tasked with taking on the likes of the Audi Q7, BMW X5, Mercedes GLE, Jaguar F-Pace and Volvo XC90. The problem is, quite a few of those cars can be specified with seven seats, whereas the Lexus is a five-seat machine only. Can its futuristic exterior looks tempt enough buyers to take a punt on this appealing SUV?

Did you know? The Lexus RX is put together by master Takumi craftsmen, who hand-stitch the seats and hand-polish the paint’s foundation coats.

There’s a lot to admire about the Lexus RX, and it’s certainly something different in a marketplace where many of the rivals’ bodies are more demurely styled. We like the hybrid’s charismatic V6 engine, we like the space afforded to the occupants within, and we like the equipment/safety tech levels that come at reasonable prices. But there are a few compromises too many with the RX that preclude it from challenging at the highest levels of this class, such as the mediocre driving experience, a hit-and-miss dashboard, and the lack of a seven-seat option that is becoming a mandatory feature for vehicles in this class. We’re therefore left with a curious oddity in a class of conservatism, the RX being of no small interest to car fans – and yet not recommendable as the best purchase in the segment.

There’s absolutely no doubt that design is one of the Lexus RX’s main selling points, although the side view pictured above is its least flattering angle because it reveals that awkwardly long front overhang. While we’re big fans of the look of the overall class-leader in this large SUV field, the Volvo XC90, even the achingly cool Swede can’t match the Japanese machine for sheer visual drama. With a mass of curves, sharp edges, chamfered swage lines, that enormous ‘spindle’ front grille and its natty ‘floating roof’, the RX is the surely the embodiment of origami in car design form. It’s clearly a vehicle that is not going to win universal acclaim, because daring decisions like this often polarise public perception, but whatever you think of the aesthetics (some of us here like them a lot), you cannot deny Lexus deserves commendation for being so brave with its SUV.

Base models get smaller 18-inch alloy wheels, but the F Sport variants have a strong look, courtesy of 20-inch wheels and a mesh-effect finish for the radiator grille that bolsters the car’s front end. The F Sport RXs also have two exclusive body colours to choose from to mark them out further from their more luxury-oriented brethren.

Lexus interiors are a mixed bag. For every good feature you find, there’s invariably something else that is so-so, or – even worse – mildly infuriating. That’s the case with the RX. It’s massive inside, with plenty of space for rear-seat passengers, but of course only five people at a time can climb aboard. The dashboard and most of the major fixtures feel as if they’re screwed together to likely withstand nuclear Armageddon, and yet some of the dark charcoal plastics look cheap and antiquated, even if they feel fine. There’s a lovely 12.3-inch infotainment screen atop the fascia on most models, but it’s controlled by a dreadfully clunky mouse-type joystick on the console that's hard to use accurately on anything less than a perfectly smooth road. And for all its futuristic exterior appearance, the Lexus wears perfectly humdrum analogue dials in its instrument cluster. It’s just too hit-and-miss inside for our liking.

Low marks here because of the omission of a seven-seat option. The Lexus’ swooping roofline and that steeply angled rear screen mean there’s not even the possibility of fitting two tiny occasional seats in the back and trying to claim the RX is a 5+2. Furthermore, boot space is ultimately limited by that sloping hatch, as modest-for-the-class capacities of 539 litres (seats up) and 1612 litres (seats down) demonstrate. In short, the Lexus is hamstrung by its own rakish bodywork. The RX claws back some honour, though, with the rear seats' ability to split 40:20:40. The front seats are eight-way electrically adjustable on every single model, and the steering column is also electrically powered range-wide so the driver can set the desired position of the wheel with ease.

As it’s a high-end Japanese car, this is a strong area for the Lexus RX. Base S (petrol) and SE (hybrid) models get an eight-inch infotainment screen with standard Lexus Navigation, but it only takes one step up the specification ladder to see that screen enlarged to 12.3 inches with Lexus Premium Navigation thrown in. Across the board, all RXs have a 4.2-inch TFT multi-information cluster display, a reversing camera, a multifunction steering wheel, DAB radio, Bluetooth and two USB ports. Wireless phone charging comes in at Luxury grade and there’s a head-up display (either optional or standard) at the higher end of the RX range.

Sound systems kick off with a nine-speaker Pioneer system in the S and SE cars. Moving up to Luxury or F Sport sees three more speakers added, as well as a subwoofer and a DVD player, but the real audio gem comes in the form of the 15-speaker Mark Levinson Premium Surround Sound system that’s standard on the range-topper and an option on the F Sport. This is a superb set-up, with real power and clarity even at the highest volumes.

If all you want is a bit of comfort and quiet, then the Lexus RX won’t let you down. We’d advise steering clear of the 2.0-litre, turbocharged four-cylinder petrol engine in the 200t; it’s a fine motor when placed in the smaller, lighter cars that Lexus makes, but its 238hp/258lb ft outputs struggle to deal with two tonnes of prime SUV. The front-wheel-drive model takes a relatively leisurely 9.2 seconds to hit 62mph from rest, and the all-wheel-drive version is even more relaxed with a 9.5-second time.

Better, then, to look at the flagship of the RX range and it’s another of the Toyota/Lexus group’s beloved hybrids. The 450h has a 3.3-litre normally aspirated V6 petrol engine, rated at 263hp and 247lb ft, augmented by a pair of electric motors with another 167 and 68hp respectively and unspecified – but instant – maximum torque. Hold your horsepowers, though, because the RX 450h does not have a combined output of 493hp; Lexus quotes a peak system figure of 313hp, because the various power sources reach their maximum outputs at different speeds, and it refuses to put overall torque data to paper. This clever drivetrain, the electric part of it powered by nickel-metal hydride batteries, is connected up to a CVT that’s one of the better units of its type we’ve tried.

But the RX hybrid is no sports car in disguise. It cruises beautifully, banishing most external noise contributors from the passenger compartment, and there’s an appealing smoothness about the whole drivetrain. Yet far too much body roll, so-so acceleration and steering that’s light and lacking feel rob the Lexus of any sort of driver excitement. The RX is far happier being driven in a sedate manner – so set your dynamic expectations accordingly.

Aside from the usual ABS, ESC and stability aids, every single model in the range gets Lexus Safety System+ (which is a package including Adaptive Cruise Control, Lane Departure Warning/Lane-Keep Assist, Automatic High Beam, Pre-Crash Safety and Traffic Sign Recognition), no fewer than 10 airbags in the cabin, a tyre-pressure warning system, and a body made from plenty of high-strength steel for rigidity. No wonder the Lexus scored the full five-star Euro NCAP rating, with a high score for adult occupant safety (91 per cent). There are also two ISOFIX fitting points in the outer rear chairs.

Our only grumble here is that the Blind-Spot Monitor and Rear Cross-Traffic Alert with Brake systems are fitted only to the flagship RX. These features aren’t even available as options elsewhere in the range.

There are 12 colours for the Lexus RX, although there are caveats to exactly which colours you can pick. The solitary flat paint is Velvet Black. Then there’s a clutch of metallic shades, with Graphite Black, Mercury Grey, Satin Silver, Sonic Titanium, Mesa Red and Deep Blue available across the range. However, Sonic White, Copper Brown and Vanilla Mist cannot be specified on F Sport cars, while F Sport White and Azure Blue are exclusive to that trim grade alone.

The 200t has three trim grades – running S, Luxury and F Sport – and the 450h has four, which are SE, Luxury, F Sport and finally Premier. All models get alloy wheels, LED daytime running lights and rear lamp clusters, dual-zone climate control and push-button start. Only the 200t S comes with cloth trim as standard, although it can be upgraded to the leather that is fitted to every other specification RX – and owners will then benefit from heated and ventilated front seats.

Luxury and F Sport cars get bigger 20-inch wheels, the larger infotainment screen and the option of items like a panoramic roof or a head-up display; the latter trim has suitably sporty interior styling additions and the few exterior updates outlined. The Premier RX 450h comes with a comprehensive roster of equipment, but as it costs almost £60,000 it’s not an inexpensive choice.

Despite only seating five, the Lexus RX is long and fairly wide (1895mm with the mirrors folded in), so you’ll need a big garage to accommodate it.

Obviously, the hybrid is the one that makes the most sense here. It has the best benefit-in-kind and VED rates due to its relatively low emissions, which are as little as 120g/km on 18-inch wheels. However, while impressive for the class, they’re not as good as the stellar on-paper stats a full plug-in hybrid can claim, which makes such cars subject to all kinds of attractive tax benefits. And don’t think you can run the 450h in electric mode for long periods of a time to save fuel, either, because it is a mild parallel hybrid that only charges its battery via the V6 engine and the brakes – meaning EV driving is limited to odd occasions when you’re off the throttle or going very slowly in towns. Actual economy claims across the RX range stretch from around 35mpg to almost 55mpg on the 450h, although in reality 30-35mpg is more realistic for the hybrid.

It’s a Lexus: it really couldn’t be much more reliable if it tried. A three-year/60,000-mile warranty isn’t the greatest cover available today, but the hybrid model’s battery pack has a five-year/60,000-mile guarantee on it. Servicing is reasonably pricey at Lexus dealers, although there are fixed-fee maintenance packages available to make the longer-term running costs a little more bearable.

The Lexus RX looks quite pricey on first glance, with prices starting at around £41,500 for the front-wheel-drive 200t S and climbing to more than £59,000 for a 450h Premium, especially as it’s only a five-seat SUV and the rival Jaguar F-Pace range begins at just £37,000. However, factoring in the generous comfort and safety equipment levels of all RXs, it starts to resolve itself as a better financial bet. Lexus has fair-to-strong residual values, and the equipment list of the RX should help it protect an owner’s investment better when it comes to resale time. 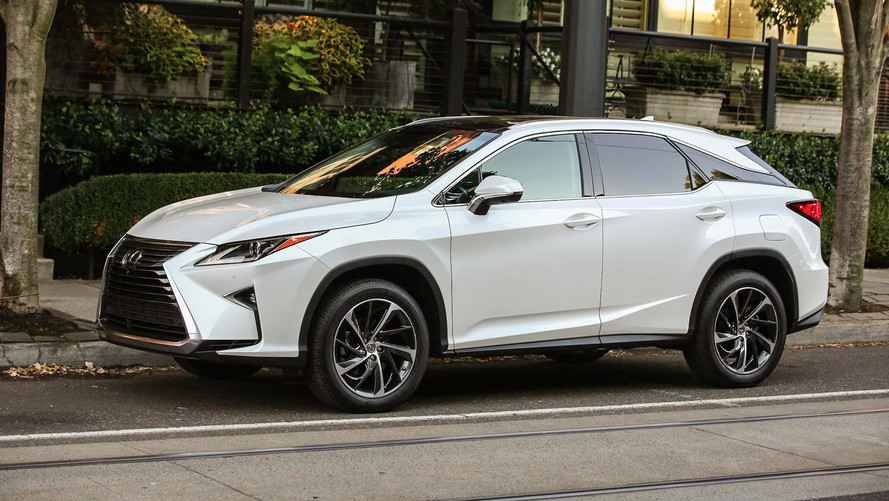