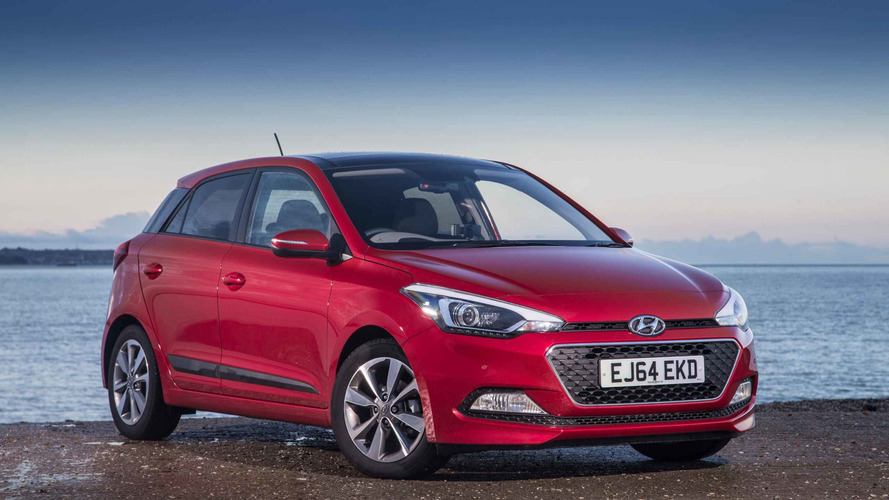 Now into its second generation, the Hyundai i20 is a seriously improved product that competes near the top end of the supermini class. Its strengths are its interior cabin space, stylish looks, the wide range of choice provided by a 26-model line-up (including a lifestyle-oriented version called the Active), the generous standard equipment lists, and the manufacturer’s superb warranty offer. It’s not the most exciting car to drive and some of the cabin plastics leave a little to be desired, but in essence the Hyundai i20 should be on anyone’s B-segment shopping list. This review focuses on the five-door version – there’s a three-door i20 but Hyundai markets that separately as a Coupe. For the exclusively front-wheel-drive hatchback, there are seven engine choices, manual and automatic gearboxes, and no fewer than 10 different specifications.

Did you know? The Hyundai i20 has genuine motorsport credentials – in the 2016 World Rally Championship, it won two rounds of the series.

The Hyundai i20 isn’t going to win any plaudits for its driving experience, because it has benign underpinnings that do little to entertain their driver. But if what you want is a quietly competent, comfortable, and well-equipped supermini hatchback that has more space than most of its rivals and a warranty among the best in the business, then the i20 deserves serious consideration. Perhaps the clincher for buyers will be the Hyundai’s looks, which are quietly handsome without being flashy.

Without being particularly striking, there’s a restrained appeal to the Hyundai i20. Neat details help its looks, such as the blacked-out C-pillar to give a ‘floating roof’ effect, the tidy light clusters fore and aft, and the brand’s trademark trapezoidal grille. You’ll spot higher-spec models with 1.2 or 1.4 engines, courtesy of a chrome grille surround, and said grille switches to a collection of horizontal lines on the cars with the 1.0-litre T-GDi unit.

There’s an Active model as well, which features rugged body styling in order to appeal to 'lifestyle' buyers. It’s easy enough to spot, as it has roof rails, revised bumpers (with round fog lights), silver skid plates front and rear, wheel arch extensions, moulded side sills, a silver-finish fuel filler cap, and black body side trim. The Active also rides 20mm higher than a regular i20, giving it improved ground clearance – but it’s not four-wheel drive, instead retaining front-wheel drive.

Like its Kia Rio cousin, the Hyundai i20 doesn’t have an adventurous dashboard design and some of the plastics used are a touch low-rent, as are a few items of switchgear. But it feels solidly put together and there’s a lot to like about the positioning of the major controls, and the visibility out and around the car. Perhaps one slight criticism of the i20 cabin is that no model comes with leather upholstery, or even the ‘Faux’ leather found on higher-grade versions of the related Rio – it’s cloth all the way in the Hyundai. At least a leather gear knob and leather multifunction steering wheel are added from SE level upwards.

Both the steering wheel and the driver’s seat are adjustable, for reach and rake, and height respectively. The rear seats split 60:40 on all models and form part of a load area that measures up to 326 litres with all chairs in use, or 1,042 litres with the back row folded away. The Hyundai’s main strength here is loads of interior space, as four tall adults should be able to sit inside with no real hardship.

Be wary of picking an S version of the i20, as these come with a basic RDS radio with just two speakers, and USB and aux-in connectivity. There’s no DAB, Bluetooth, or CD player with MP3 compatibility; that stuff arrives at SE level, along with 1GB of MyMusic storage and six speakers instead of two. Seven-inch touchscreen satnav and a reversing camera is supposedly a preserve of the models with ‘Nav’ in their names, although some grades further down the range – like the Turbo Edition – can feature these items. There is no uprated sound system to be found in the Hyundai i20, either as standard or as an option.

The i20 is assured and has a comfortable ride quality with high levels of refinement for this sector, but it’s not a thrilling drive when pressed hard. The steering lacks too much in the way of critical information for the driver, and the chassis seems nose-led and almost totally inert. What the Hyundai does have on its side is good body control and lots of grip, so it’s capable – if a little dull. Watch out for the S models again: they come with primitive drum brakes on the rear axle, rather than discs.

Hyundai offers a broad array of engines. There’s a 75hp 1.2-litre, four-cylinder petrol, and a 75hp 1.1-litre, three-cylinder CRDi turbodiesel, which feature at the bottom of the range. A more powerful 84hp iteration of the 1.2 petrol is offered further up the i20 tree, although it gains no extra torque. There’s also a 100hp 1.4-litre petrol, and a 1.4 CRDi four-cylinder turbodiesel with 90hp and 177lb ft of torque. Then there’s the 1.0-litre turbocharged T-GDi three-cylinder petrol, the most advanced motor of the group. It comes with 127lb ft and a choice of either 100- or 120hp.

Manual transmissions are offered on all engines bar the 1.4 petrol. The 1.2-litre petrol engines and the 100hp T-GDi have five-speed units, while the 120hp three-pot turbo and both diesels get a six-speed gearbox. Either shift is absolutely fine to operate.

There’s nothing massively wrong with the basic safety kit levels on the Hyundai i20, as all cars benefit from six airbags, ABS, ESP, Hill-start Assist Control, two ISOFIX seat mountings in the rear, a tyre-pressure monitoring system, and Vehicle Stability Management as standard.

However, while Lane Departure Warning comes in from SE level and above (except on the Active, which has to make do without), there’s no Autonomous Emergency Braking or driver fatigue monitor here. And the i20 has an underwhelming four-star Euro NCAP rating, with only one score in excess of 80 per cent (adult occupant safety, 85 per cent) out of the four disciplines.

There are eight colours in the Hyundai i20 family. Polar White solid is the only non-cost choice for all cars. The metallic and pearl paints are all more than £500. Aqua Sparkling metallic, Phantom Black metallic, and Sleek Silver metallic are available across the board. Stardust Grey metallic and Red Passion pearl are available on any car from SE level upwards. Iced Coffee metallic and Mandarin Orange pearl are only available on the SE and all four Premium models – and not for the Active or Turbo Edition i20s.

It’s worth thinking of the three ‘S’ models as a sub-range in their own right, because they only get the 1.2 petrol or the 1.1-litre CRDi diesel, both with 75hp – which aren’t found anywhere else in the i20 line-up.

The petrol powers the S and S Air models and they come with 15-inch steel wheels, electric, heated door mirrors with integrated indicators, front electric windows, and remote central locking. S Air, predictably, adds air conditioning and a cooled glovebox. The 1.1 CRDi is found exclusively in the S Blue, which does not have air conditioning, but instead majors on fuel-saving with Intelligent Stop&Go (ISG) and low-rolling resistance (LRR) tyres.

After that, the range runs SE, Premium, Premium Nav, Premium SE, and Premium SE Nav – although this hierarchy is slightly confused by the Active and Turbo Edition models that sit between SE and Premium; these intermediary trims come with one engine, the 100hp 1.0 T-GDi.

For the remaining grades, three drivetrains are available on all models: the 84hp 1.2 petrol; the 100hp 1.4 petrol with the automatic gearbox; and the 1.4 CRDi. Then, aside from its applications listed above, the 100hp T-GDi is also found in the SE, Premium, and Premium Nav i20s. The 120hp T-GDi is reserved for the top end of the range, as it can be found in any of the four Premium specs; where it overlaps with the 100hp.

Premium SE loads the luxuries, such as a panoramic sunroof, heated front seats and steering wheel, and parking sensors at the front as well as the back. Premium SE Nav does the same here as it does at Premium level – adds the mapping and camera, yet removes the CD player and music storage.

Finally, the Active and the Turbo Edition both build off SE spec. The Active brings the body addenda we outlined in the Design section, as well as LED DRLs, halogen headlights, and privacy glass at the rear. The Turbo Edition cherry picks a few nice bits from the Premium cars – and then cuts the price, so it’s definitely worth a look. The 16-inch Premium wheels, rear-view camera, seven-inch touchscreen satnav, and automatic headlights are the key additions.

While no i20 is huge, it’s worth noting the fact that the Active model is slightly larger in all dimensions than the regular hatchbacks.

With a range of engines teamed to manual transmissions that offer anything from 55mpg to more than 88mpg, the i20 is a very frugal car to run. The only model to avoid is the 1.4-litre automatic, which is needlessly profligate in this company (around 45mpg with CO2 emissions of more than 140g/km). There are only two drivetrains that dip below 100g/km, but by the same token, any manual i20 won’t emit more than 119g/km. Residual values are kept firm by the manufacturer’s long warranty, which helps manage costs.

Varying reports of Hyundai’s reliability can be solicited, but there is no doubting the company’s superb after-sales care. Hyundai offers a five-year warranty with unlimited mileage for the duration – and it chucks in five years of roadside assistance and five years of complimentary annual vehicle health checks into the bargain. If that isn’t enough to assuage your worry about long-term dependability, we don’t know what will be.

Servicing is done every 10,000 miles or 12 months, whichever comes first, irrespective of the engine type. Hyundai Sense is a service package that covers two, three or five years of maintenance costs for a one-off fee.

The S cars are all less than £13,000 standard, but to be honest you’re going to want at least an SE – certainly if you’re a private buyer – so you’re looking to spend the other side of that figure. Cramming 26 disparate models into a pricing bracket that starts at a little more than £11,000 and culminates at almost £18,000 means there’s a very congested ‘mid-range’ to the Hyundai’s line-up, with lots of i20s clustered around the £15,000 mark. The Active, for reference, is slightly in excess of £15,500.