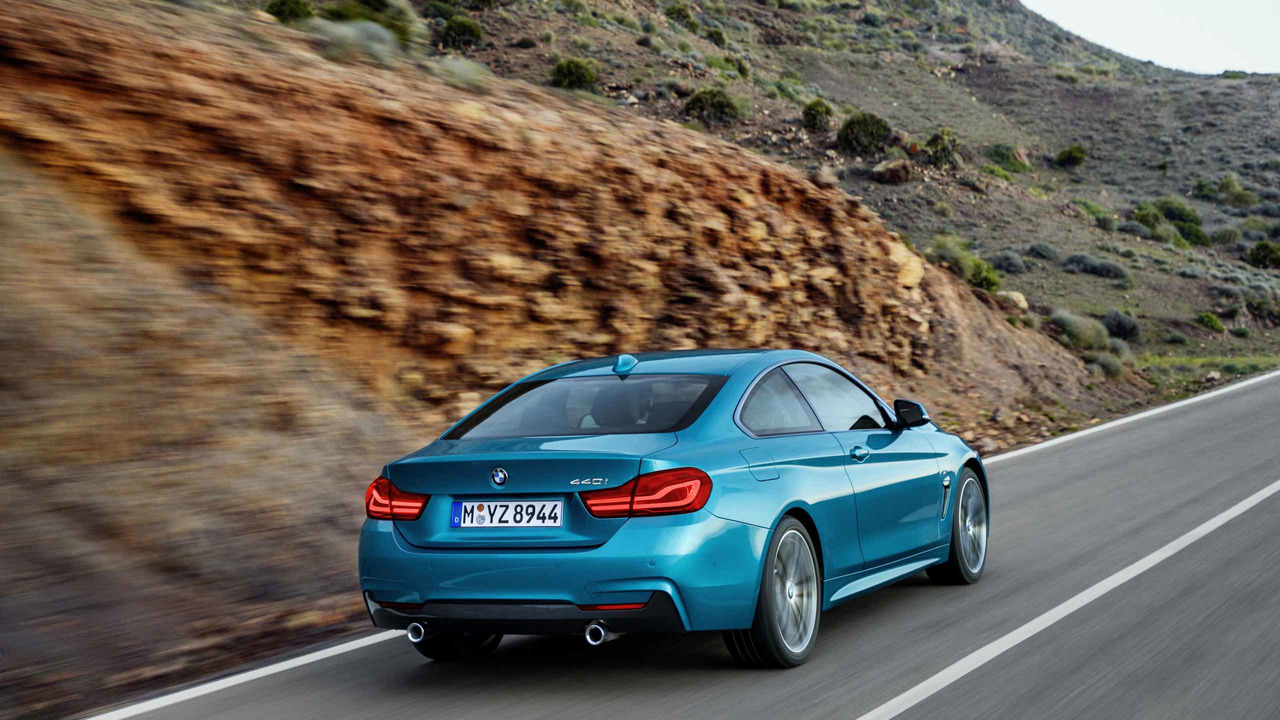 It's what all 3 Series' dream of becoming.

The sportier 3 Series Coupe morphed into the 4 Series in 2014 when someone at BMW figured out that if they changed the number to make it seem like a separate model, then they could charge more for it. Mind you, that marketing wheeze doesn’t detract from what is still a seriously entertaining car to drive, and a very high-quality road to coupe ownership.

Did you know? It looks similar to the 3 Series, but the only part of the body shared with the 4 Series is actually the bonnet. Everything else is unique.

We can forgive the cynical marketing ploy of adding a digit to the name to add several digits to the price tag, simply because the 4 Series is so good to drive, so subtly muscular to look at and so practical for a two-door, four-seat coupe. As with the 3 Series, you have to be careful with the spec sheet to get the right car for the right price, but this is an entertaining and great looking car, and still close to being the 'ultimate driving machine'.

With only the bonnet to share with the 3 Series, the 4 Series manages to carve out enough of its own style to justify the name change. See the two cars separately and you’ll think they’re basically the same. See them side-by-side and it’s clear that the 4 Series is the more muscular, more sporty-looking one. Its wheelarches stretch further out over the alloys, its roofline is pulled clearly tauter and further back, and the nose dips down further to meet the tarmac.

BMW’s image is essentially bullet-proof. As the focus on aggressive drivers seems to have moved, in the public mind, to Audi, so the blue-and-white propeller badge has regained respectability and the fact that the 4 Series looks as good as it does merely adds lustre to an already desirable mix of German quality and engineering, and old-fashioned driving fun.

The 4 Series borrows its interior almost entirely from the 3 Series, although there are a couple of small trim differences. You do sit noticeably lower down in the 4 Series, although that won’t stop taller drivers occasionally brushing their heads on the lining of the sucked-down roof. Quality inside is generally excellent, but as with the 3 Series, the 4 Series’ dash can look a bit under-dressed unless you’ve been pilfering from the options list a bit. Basic cabins, with plain black dashboard and seats, just look a touch cheap, although at least they have the benefit of simplicity, and items such as the clear instrument gauges and logical control layout are pretty much un-improvable.

While the 4 Series is a reasonably practical car in terms of it being a coupe, in absolute terms you’ll soon find that legroom is restricted in the back seats, even for kids, and headroom is pretty tight for everyone. It’s also a strict four-seater, although the lack of a centre seat does at least mean that there’s a load-through facility for longer items from the boot, and those sitting in the back do get the benefit of big storage trays and cupholders.

The boot is pretty roomy, really, and with 445 litres of space, only a little smaller than what you get in a 3 Series saloon. The downside though is that it’s quite a shallow volume, and the boot lid (which can be optionally powered and gesture-controlled) doesn’t open quite wide enough for large items to be packed in.

Standard on all models is the iDrive system with a 6.5-inch screen, Bluetooth, USB connection, and BMW’s emergency call system that rings the emergency services if it detects a crash. You also get the Drive Performance Control system, which allows you to switch between Eco Pro, Comfort, Sport, and Sport + modes. From there on in, you can start adding from a huge variety of connected serviced and tech add-ons, from Apple CarPlay, through to BMW’s on-call Concierge service, a Connected Music system that uses the car’s built-in SIM card to connect to streaming music services, a Wi-Fi hotspot, door-to-door navigation that can link to your home computer and advise you when you’d be better off taking public transport, connection to Amazon’s Echo system that allows you to lock your car and check its status by voice command from inside your house, remote services including Google Search, a find-my-car function, a learning function for the satnav so that it can offer suggestions on your most commonly-used routes, Apple Watch and Samsung Gear compatibility, real-time traffic and weather information, and BMW Office, which allows you to integrate some email and calendar functions into the dashboard.

That the 4 Series is rewarding to drive can be taken almost as a given, right? It’s a BMW coupe, low-slung, rear-drive, (with optional four-wheel drive) and therefore should be at the top of the tree when it comes to driver reward, surely?

Mostly, yes, but there are some weak points in the 4 Series’ performance in this regard. The chief culprit here is, somewhat surprisingly, the steering. For the most part, it’s well-weighted, accurate, fast across its locks and pretty well rewarding. The variable sport steering is also good, changing the gearing of the steering so that you require less effort for low speed manoeuvres, but there is occasionally an odd, artificial sensation that comes back to you, which feels strange, and the worst culprit of all is the heavily-padded, pillow-like steering wheel rim fitted to M Sport spec cars, which smothers feel like a blanket. At least the chassis balance itself is near-perfect – models with more powerful engines can be easily teased into pleasing slides and drifts, where safety and driver skill allows, and the optional xDrive four-wheel drive makes the 4 Series feel noticeably more stable in poor weather conditions.

Of the engines, the 420d 2.0-litre diesel has become almost the default choice, thanks mostly to exceptionally good emissions and fuel consumption. A power output of 190hp makes sure it’s no slouch in a straight line, but it is quite noisy by modern diesel standards, and can drone a bit too much on the motorway. Upgrading to the six-cylinder 430d is highly recommended, and it’s a really quick car with a 0-62mph time of just 5.5 seconds. The more powerful still 435d, with 313hp and standard xDrive, is a serious performance car, with a 4.7-second 0-62mph time that is almost good enough to trouble the BMW M4.

The 420i, which uses a 184hp 2.0-litre four-cylinder turbocharged petrol engine, is well worth a look too, with good performance (7.3-second 0-62mph time) and decent economy and emissions. The 252hp 430i version of the same engine is lovely too, and as for the six-cylinder turbo 440i 3.0-litre, well, words almost fail us.

The 4 Series is also one of those rare cars where the choice between manual or automatic transmission is relatively open. The eight-speed auto is an excellent unit, and will probably be helpful come resale time, but the notchy six-speed manual is hugely engaging, and enthusiasts will love it.

The 4 Series hasn’t been tested by Euro NCAP, but the 3 Series with which it shares all of its structure and mechanical package is a five-star result test car, with scores of 95 per cent for adult occupant, 84 per cent for child occupant, 78 per cent for pedestrian protection, and 86 per cent for safety assist.

All models come with LED headlights, which can be equipped with fully active high-beam control, and six airbags are standard too. Stability control, run flat tyres and a tyre pressure monitor are also standard. There’s a Dynamic Safety pack that includes active pretensioned seatbelts, a driver attention monitor, and which closes the windows and sunroof if it detects an accident about to happen. You can also have lane change warning and steering, active cruise control with traffic jam assistant, reversing camera, parking assistant, upgraded M Sport brakes, city braking with pedestrian protection, forward collision warning, a speed limit display, and a full surround camera system. The only shame is that so many of the life-saving systems are on the options list.

There are basically two trim levels for the 4 Series, Sport and M Sport, but those are followed by a near-endless list of optional extras and equipment packs.

The 4 Series Coupe is not a massive car, by any means, but remember that those wheelarches are a touch wider than those of 3 Series saloon.

BMW has become a master, in the past decade, of offering decent engine performance that doesn’t punish you at the fuel pump or in your tax bill. The 420d diesel is, unsurprisingly, the best-performing engine in this respect, with official economy of 62.8mpg (65.7mpg with the automatic gearbox) and emissions of 119g/km (114g/km for the auto). The petrol 420i isn’t too far behind, with 46.3mpg and 141g/km – respectable for a turbocharged petrol engine with performance on its mind. The 430i shadows it closely on 43.5mpg (or an impressive 48.7mpg with the automatic) and 151g/km (or, again impressively, 136g/km with the auto). Only the 440i counts as thirsty, with 36.7mpg and 179g/km (although again these can be improved by the automatic gearboxes to 41.5mpg and 159g/km).

The 4 Series has had eight recalls, for seatbelts, stalling engines, loss of steering assistance, and faulty airbags. By and large, BMW has a good reputation for quality and reliability if kept properly serviced, but some owners are still sore about the unreliability of older BMW diesel engines.    Servicing is monitored by the car itself, and it will give you a regular count-down to when you next need a trip to the dealer, but around every 12,000 miles is a good average. All models come with three-year unlimited mileage warranty, and you can pre-pay for servicing and maintenance costs with three- or five-year packages.

It’s not the cheapest car in the world, the 4 Series, and its pricing is further undermined by the fact that (a) a 3 Series Saloon is almost as good to drive, and cheaper to buy and (b) a 2 Series Coupe is even more fun to drive and cheaper to buy.